Along with the significant increases in average life expectancy and older population growth in recent years, a rise in the number of patients treated for osteoporotic vertebral compression fractures (OVCF) has been observed (1). For these fractures, treatment such as traditional bed rest or external fixation of braces can easily cause the bone to further decalcify and loosen, forming a vicious circle. Osteoporosis and the poor general condition of patients also limit the possibility for open reduction and internal fixation with a pedicle screw (2). In recent years, new minimally invasive techniques, such as percutaneous vertebroplasty (PVP) and percutaneous kyphoplasty (PKP), have gradually been applied and demonstrated to have a marked effect, especially in the treatment of OVCF (3,4). However, as the application range and the number of follow-up cases have increased, a growing number of complications have been reported (5).

The major complications encountered in the treatment of OVCF can be short- or long-term. Intraoperative complications include toxic reactions to bone cement, damage to the spinal dura mater during puncture. Postoperative short-term complications mainly involve tamponade of the vertebral canal and nerve root compression caused by leakage of bone cement, while the fracture of adjacent segments is a common postoperative long-term complication (6). Uppin et al. (7), who performed follow-up of 177 patients with PVP over the course of more than 2 years, suggested that a new fracture was present in 12.4% of patients, 67% of whom reported the occurrence at the segments adjacent to the strengthened vertebrae. Secondary fractures of the adjacent segments after vertebroplasty are often the main complications influencing patients’ postoperative long-term recovery and satisfaction. Therefore, a surgical technique that is relatively safe with few complications is urgently called for. Our experiment aimed to apply Navier Stokes equation of momentum conservation motion to describe the movement of bone cement, which is the first time to simulate the injection of bone cement into the vertebral body of osteoporotic fracture, and to inject the instantaneous incompressible viscous fluid bone cement into porous cancellous bone. The distribution of bone cement in the three-dimensional (3D) finite model is obtained. In order to study the best perfusion and distribution of the vertebral body in vertebroplasty, and the relationship between the distribution and the recovery of the stiffness of the diseased vertebral body and the increase of the stress of the adjacent vertebral body.

A 35-year-old healthy male free from other diseases was admitted to Central Hospital of Songjiang District (Shanghai, China). After his consent was obtained, GE 64-slice spiral computed tomography (CT) was used to scan the thoracolumbar segments. The scanning conditions were as follows: 140 kV, 200 mA, layer thickness of 0.625 mm, and no interval. MIMICS software was used to perform bone separation by defining thresholds, forming masks, growing regions, editing, etc. T12-L2 bones were extracted, including T12, L1, and L2 vertebrae along with 3D computer-aided design (CAD) models of the intervertebral discs. The material parameters of the bone were changed, to establish the osteoporosis model. The Remesh function was used to perform preliminary smoothing of the 3D model created using MIMICS software, and the Initial Graphics Exchange Specification (IGES) format file was output. Then, HyperMesh was imported to mesh, set boundary conditions and material parameters, and to perform other pretreatments. Finally, ABAQUS 6.11 software (ABAQUS Inc., Waltham, MA, USA) was utilized for computational solutions. To simulate the fracture, the height of the anterior edge of the L1 vertebral body was reduced by 10%, and the elastic modulus of the cancellous bone was also decreased. Meanwhile, in line with previous studies (8-10), the respective characteristics of cortical and cancellous bone, the pedicle of the vertebral arch, transverse processes, spinous processes, intervertebral discs, and various ligaments of the vertebrae were defined (Tables 1 and 2). Eventually, the finite element model was created. Based on the osteoporotic fracture model, the simulation was performed for injecting the transient incompressible viscous flow fluid-bone cement into the cancellous bone (the momentum Navier-Stokes equation was used to describe the motion of the bone cement), and the process of injecting bone cement into a 3D vertebral body model was simulated to perform 3D distribution after the injection of bone cement into the vertebral body. The injection modes were 2, 4, and 6 mL on both sides, respectively. The diffusion range of the bone cement was outlined layer-by-layer on the simulated image, and the layers of each surgical vertebral body were calculated to obtain different bone cement perfusions and distribution patterns. 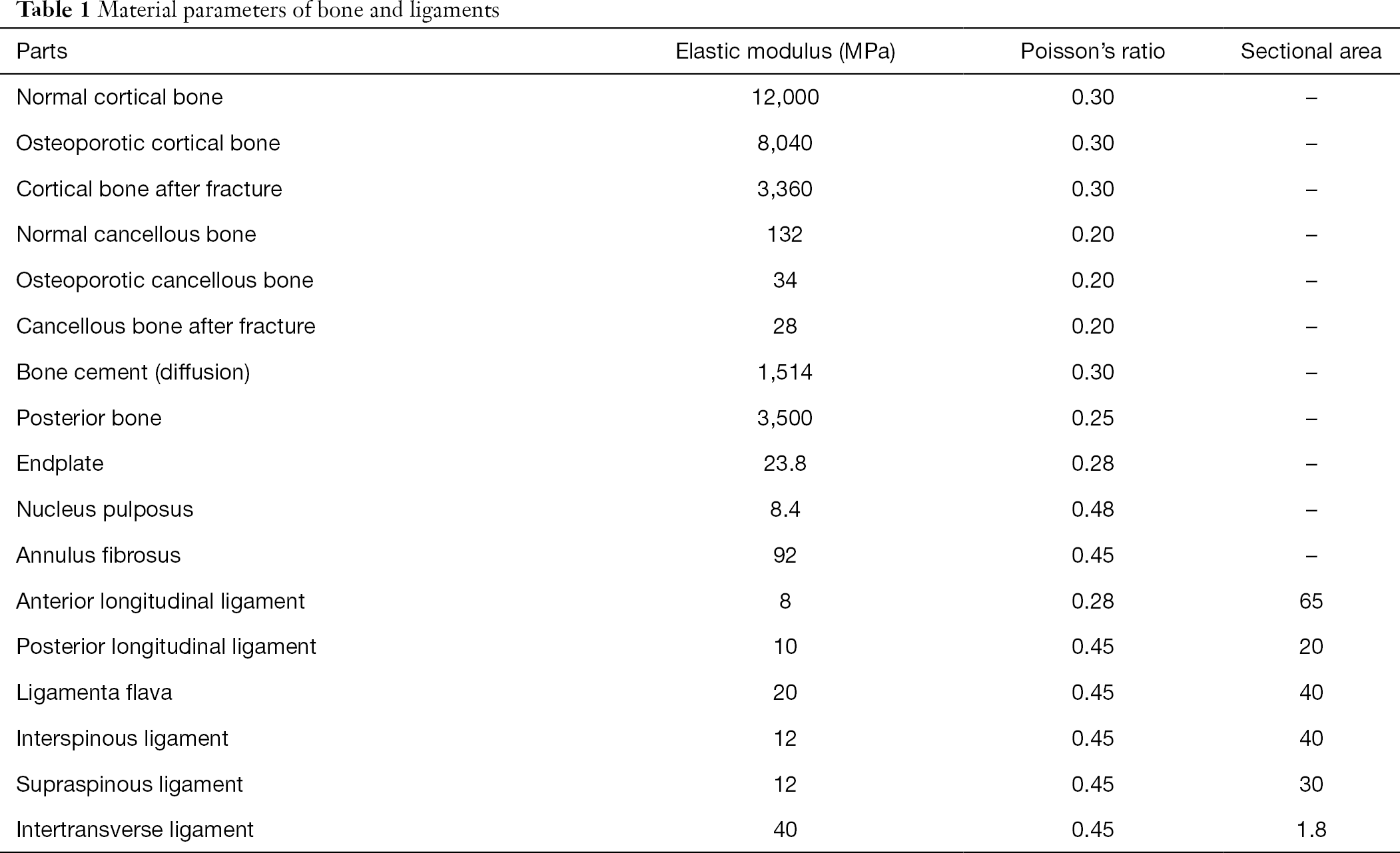 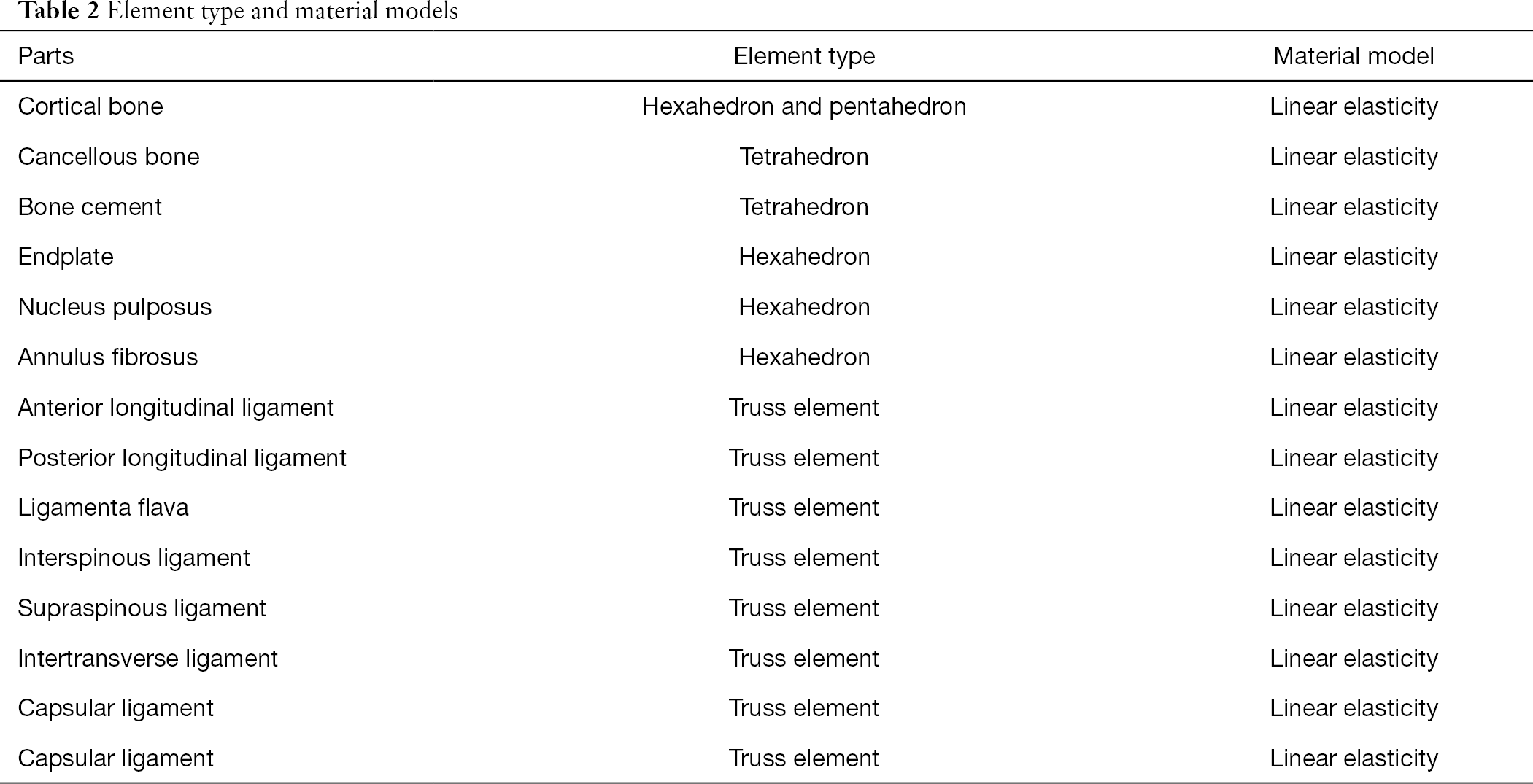 Modeling: the T12-L2 model was created, from which the L1 vertebral model of osteoporotic fracture is shown in Figure 1 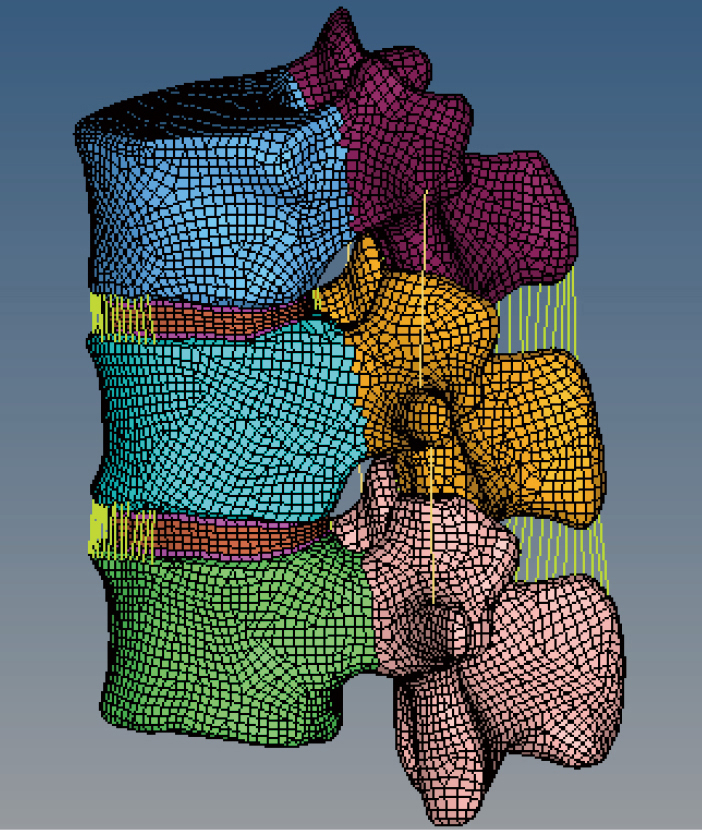 The model was established based on the anatomical data of different ligaments and bones. The anterior edge of the L1 vertebral body was reduced in height by 10%, and the elastic modulus of cancellous bone was reduced by reference. The model was assembled to produce a realistic simulation of osteoporotic fracture, as shown in Figure 1.

Simulation of fluid flow into the fractured vertebral body (Figure 2) 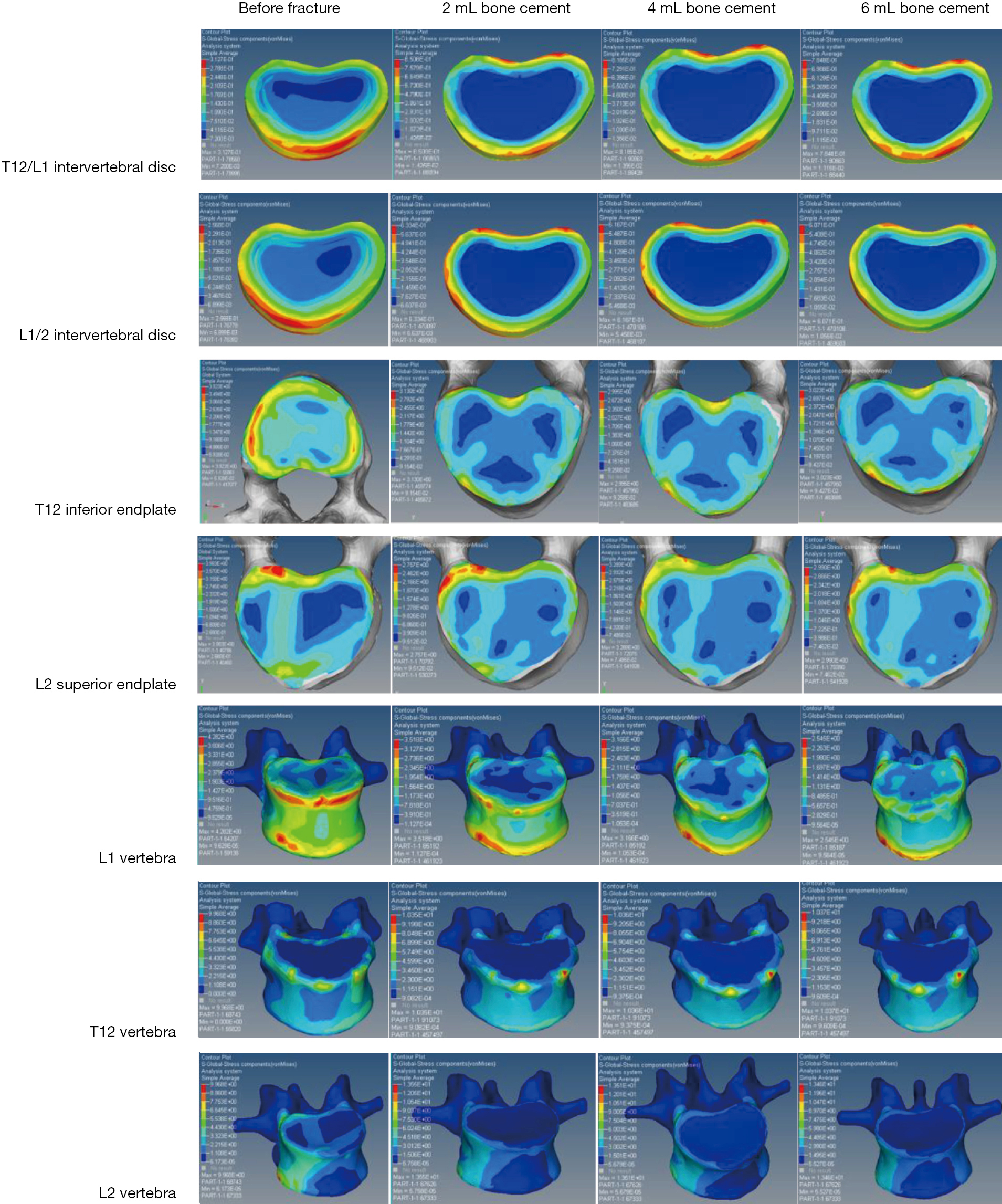 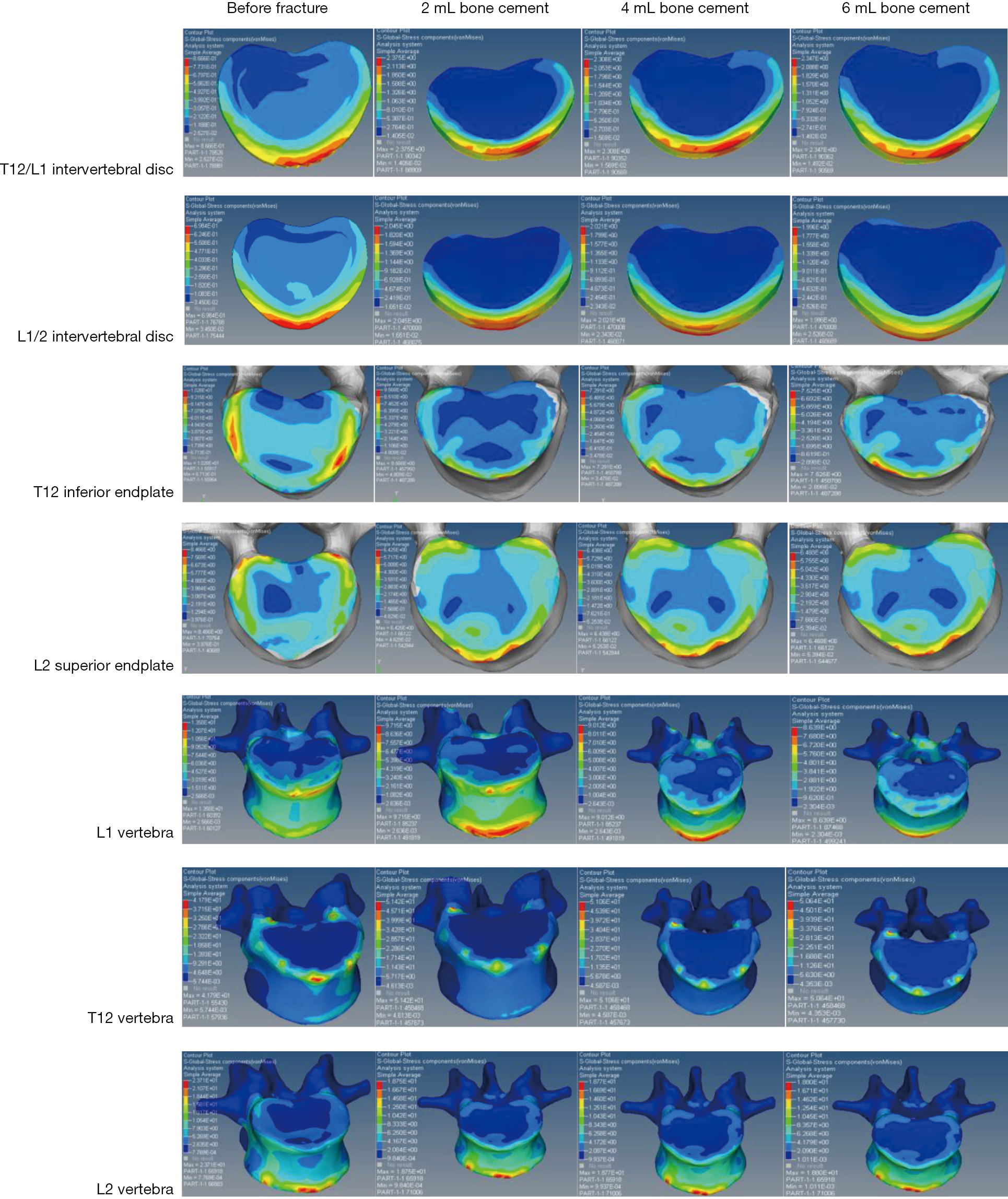 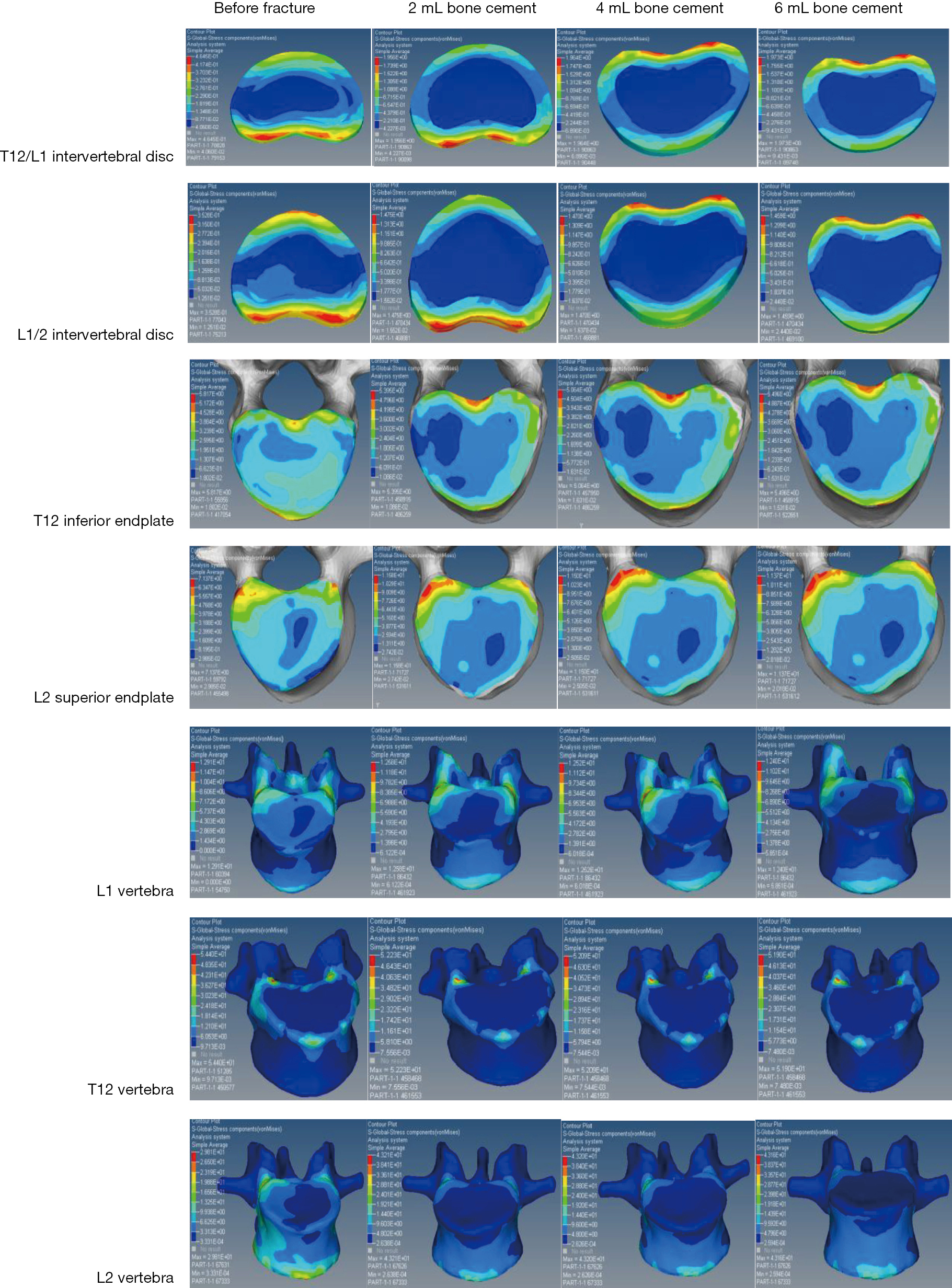 Tables 3, 4, and 5 show the maximum stress values of the intervertebral discs and each endplate in different states.

The finite element method uses mathematical approximation to process a complex physical system through a number of small units, known as finite elements; thereby complex problems can be simplified. The FEM does not require several animal carcass specimens, meaning it can be applied for long-term repeated experiments, and therefore holds incomparable advantages in biomechanical simulation. Since the 1990s, finite element analysis has undergone rapid development in the field of spine surgery (8-11).

In recent years, PVP has been widely applied to treat osteoporotic fractures, owing to its minimal trauma, quick recovery time, and effectiveness. However, with the increasing duration of patient follow-up, related complications have gradually presented. Tanigawa et al. (12) performed follow-up for an average of 33 months in 194 patients, discovering that 33% of patients suffered fractures after PVP, and 67% of fractures occurred in the adjacent vertebrae, which was significantly higher than the rate in the non-adjacent segments. Secondary fractures of vertebral adjacent segments after vertebroplasty are often the main complications, negatively impacting the postoperative long-term efficacy of PVP and patient satisfaction. The reason may be attributed to the higher viscosity at which the bone cement is injected, which often restricts the diffusion distribution of the bone cement in the vertebral body. As osteoporosis causes post-fracture compression of the pore structure in areas of trabecular bone, only a certain space is left to accommodate the bone cement with high viscosity, thus limiting the distribution of the bone cement, and making the uniform distribution in the whole vertebral body unattainable. Furthermore, it destroys the initial pore and frame structures in the vertebral body, which are replaced with agglomerate bone cement, thereby changing the vertebral stiffness, elastic modulus, and other mechanical properties.

Baroud et al. (8,14) used the finite element model to study the morphological changes of the endplates after vertebroplasty and stress conduction, and it was discovered that the rigid bone cement mass under the endplate played a vertical supporting role and reduced physiological recession of the endplates, increasing the internal pressure of the adjacent intervertebral discs by 19%. In this case, the physiological recession of the endplates was taken as the cause of fracture in the adjacent vertebrae. A number of scholars also believe that the uneven distribution of bone cement in the vertebral body is typically the main cause of secondary fractures of adjacent vertebrae after vertebroplasty.

The present research experiment studied the stiffness recovery of diseased vertebrae and the stress analysis of the adjacent vertebrae after simulating fluid flow into the vertebral body by injecting different amounts of bone cement. The Von Mises stress in the endplate under T12, in which fracture can easily occur, was revealed as the highest in the three states both before and after the fracture. This was also consistent with the rule of the multiple fracture sites and the pathogenesis of adjacent vertebrae fractures.

Ethical Statement: The authors are accountable for all aspects of the work in ensuring that questions related to the accuracy or integrity of any part of the work are appropriately investigated and resolved. Informed consent was obtained from of the subjects who participated with the investigation.