We present the following article in accordance with the STROBE reporting checklist (available at http://dx.doi.org/10.21037/apm-20-855).

A total of 224 elderly hip fracture patients (105 males and 119 females) who underwent THA were enrolled. The patients had a mean age of 71.12±6.0 [60–85] years old. The mean duration between fracture and surgery was 4.02±1.61 [1–7] days. All patient data were collated and reviewed after informed consent was obtained from the patients. The study complied with the relevant medical ethics regulations.

All patients were followed up for a period of 1 year after THA. In the event of a patient experiencing a new trauma or fracture-related symptoms during this period, they were admitted to the hospital to undergo imaging tests and consultation. The patients with or without confirmed contralateral hip fracture were assigned to the refracture group and the control group, respectively.

After fasting overnight, peripheral blood (5 mL) was collected from the basilic vein of the patients, and routine hematological indices, including white blood cell, platelet, and red blood cell counts and hemoglobin levels, were measured using an automated blood analyzer. The blood samples were centrifuged at 3,000 rpm for 15 minutes to collect serum. Subsequently, serum CRP and Alb levels were measured using the specific ELISA kits (Shenzhen Jingmei Biotech Co. Ltd., China), and the CRP/Alb ratio was calculated.

Data were processed using SPSS20.0 statistical software [IBM Corporation (SPSS Co.)] and tested for normal distribution. The normally distributed measurable data were expressed as x±s and compared using the independent samples t-test. Count data were expressed as percentages and compared using the χ2 test. Binary Logistic regression analysis was used to test the effect of CRP/Alb on contralateral hip re-fracture after total hip replacement. The area under the receiver operating characteristic (ROC) curve was calculated to assess the predictive value of CRP/Alb. Statistical significance was indicated when P<0.05.

Comparison of baseline data between the refracture and control groups 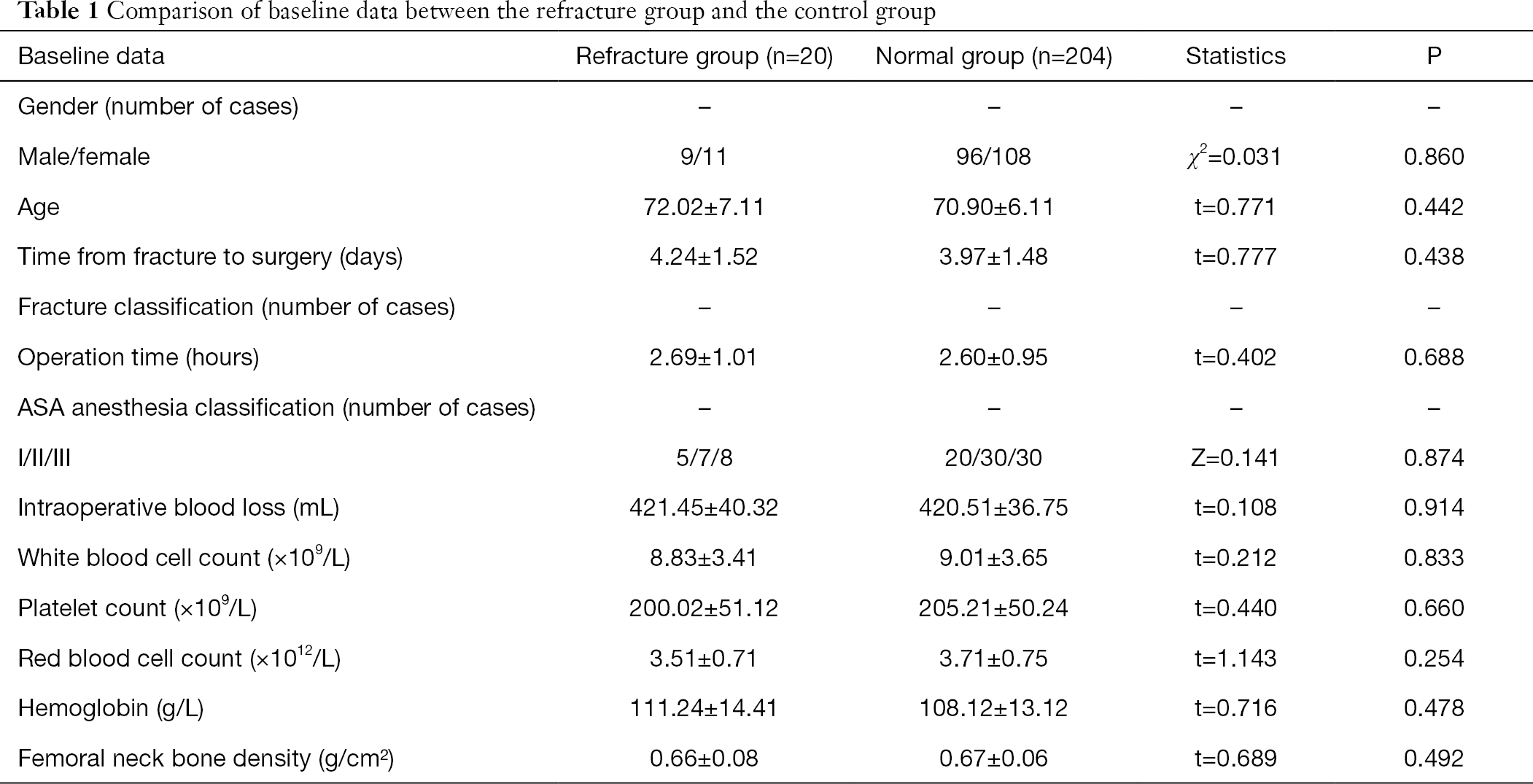 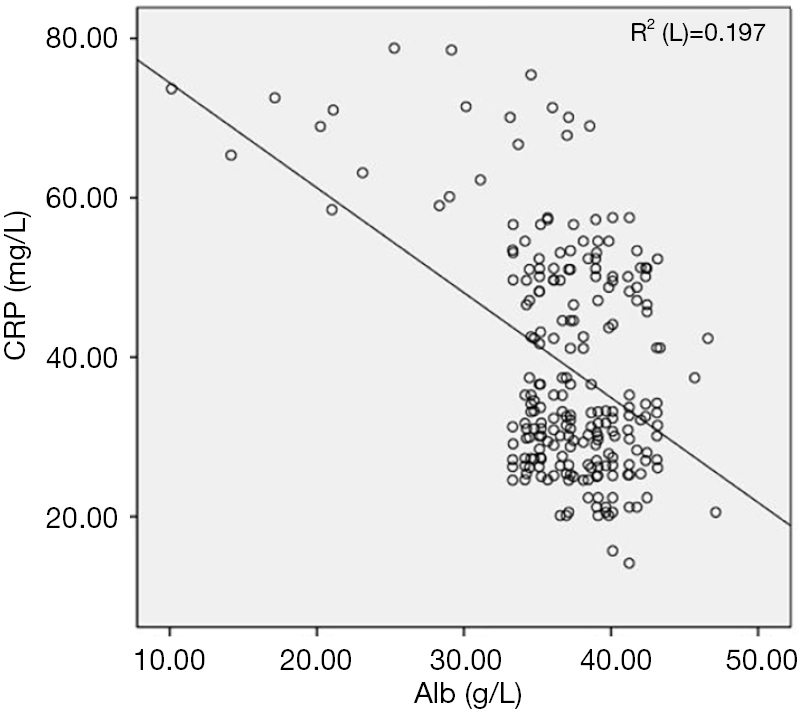 A ROC curve was plotted with incidence of post-THA hip refracture as the state variable. The area under the curve for the CRP/Alb ratio was 0.841 (95% CI: 0.702–0.914), and the optimal cutoff value was 1.12. The corresponding specificity and sensitivity were 0.782 and 0.945, respectively, and the Youden index was 0.727 (Figure 2); thus, preoperative CRP/Alb has high predictive ability for post-THA refracture. 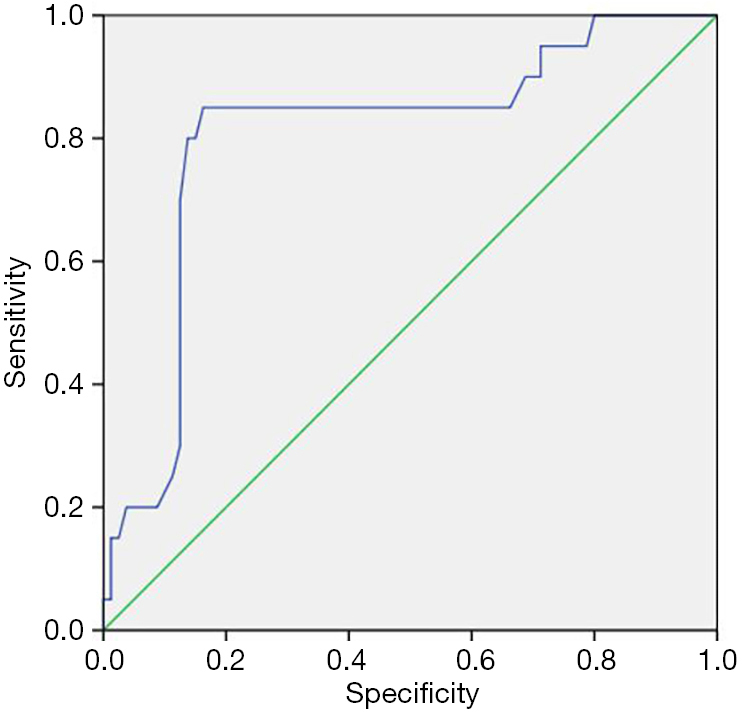 Older patients carry a higher risk of contralateral hip refracture following hip arthroplasty due to bone loss. Besalduch et al. (7) reported an incidence of 10.8% for post-surgery contralateral hip fractures in the elderly population, which is close to the 8.4% observed in a similar Chinese study (8). The incidence of post-THA contralateral hip refracture in our cohort was 8.93%, which is consistent with these findings. Because of the increased risk of death for patients with post-surgery contralateral hip fracture, it is vital that the causative and predictive factors with relatively high specificity and sensitivity are identified, so that refracture can be prevented and treated early (9,10). Despite the results of previous studies showing satisfactory prediction of the risk of post-surgery contralateral hip refracture through acute physiological and chronic health evaluation systems, surgical severity, physiological ability, and surgical invasiveness scores (11,12), the complexity and diversity of these indices often limit their application in a clinical setting, especially in primary hospitals. Therefore, a simpler and more effective laboratory-based indicator is urgently needed to predict and evaluate this risk.

Studies have revealed that the concurrence of a fracture and trauma or infection is closely associated with the severity of the fracture. CRP, a reliable marker of trauma/infection-related inflammation, is an important indicator of orthopedic infection following surgery (13,14). A recent study showed that an elevated level of preoperative CRP is a primary risk factor of post-THA death in older patients with hip fractures (15), indicating that it may also be associated with increased incidence of post-surgery contralateral hip refracture. Serum Alb is an important indicator of protein/energy consumption and is routinely used to evaluate perioperative nutritional status (16). As a standard laboratory test, several studies have used serum Alb detection as a prognostic indicator in elderly patients with hip fractures. Low perioperative serum Alb level is a major factor affecting the length of hospital stay, recovery of normal activities, and the risk of postoperative death among such patients; this is evidenced by the correlation between poor nutritional status during the perioperative period and slower postoperative recovery (17,18). Thus, low serum Alb level is also a factor potentially related to the incidence of post-surgery contralateral hip refractures.

As indicators of the immunological and nutritional status respectively, CRP and Alb levels have limited clinical utility when applied separately. In fact, the ratio of CRP to Alb is more accurate as an indicator of both inflammatory and nutritional status compared to either index (19,20). Because the level of perioperative or postoperative detection may be affected by the operation itself or medication during the perioperative period, this study mainly observes the impact of the preoperative CRP/Alb on patients, and has ensured the credibility of the results. The results of this study showed that compared with the normal group, the patients in the contralateral hip re-fracture group had higher preoperative blood CRP levels, lower Alb levels, and higher CRP/Alb ratio, and the contralateral hip re-fracture group patients showed higher CRP and Alb levels. Negative correlation, that was, with the increase of CRP, the Alb of the patient decreased. It was speculated that the increase in systemic inflammatory response before surgery may be the cause of poor nutritional status. As the nutritional status continued to deteriorate, the systemic inflammatory response also increased, both Interactions were causal to each other and therefore affect the prognosis. Linear regression analysis indicated that the CRP/Alb ratio is a potential risk factor for post-THA contralateral hip refracture in elderly hip fracture patients, and its high predictive value was confirmed by ROC curve analysis. Altogether, these findings suggest that preoperative serum CRP and Alb levels, and the CRP/Alb ratio can predict the risk of post-surgery contralateral hip refracture in older people, this risk can be reduced by nutritional fortification and attenuation of systemic inflammatory response before surgery. However, this study also has certain limitations. First, the study was a retrospective single-center study with limited medical record data, especially the small sample size of the contralateral hip re-fracture group. Second, the study did not fully consider other factors. The possible impact and the results obtained may deviate from the actual. These limitations should also be verified by prospective, large sample and long-term research in the future.

In summary, serum CRP level is correlated with Alb level in elderly hip fracture patients, and the CRP/Alb ratio is a risk factor for post-THA contralateral hip refracture. Therefore, to predict the risk of post-THA contralateral hip refracture, the preoperative serum CRP/Alb ratio should be measured in elderly hip fracture patients.

Reporting Checklist: The authors have completed the STROBE reporting checklist. Available at http://dx.doi.org/10.21037/apm-20-855

Conflicts of Interest: All authors have completed the ICMJE uniform disclosure form (available at http://dx.doi.org/10.21037/apm-20-855). The authors have no conflicts of interest to declare.

Ethical Statement: The authors are accountable for all aspects of the work in ensuring that questions related to the accuracy or integrity of any part of the work are appropriately investigated and resolved. All patient data were collated and reviewed after informed consent was obtained from the patients. The study complied with the relevant medical ethics regulations. The Affiliated Hospital of North Sichuan Medical College [2017ER (A) 034].