Obstructive sleep apnea-hypopnea syndrome (OSAHS) as an independent risk factor for cardiovascular diseases is closely related to the development of many cardiovascular diseases such as left ventricular remodeling (1), vascular endothelial injury (2), coronary heart disease, congestive heart failure (3), and arrhythmia (4,5). It is well known that the intermittent hypoxia is involved in the pathogenesis of OSAHS. Hypoxia may activate the sympathetic nerves and the renin angiotensin-aldosterone system (RAAS), leading to the vasoconstriction and subsequent hypertension. In addition, the fluctuation of intrathoracic negative pressure due to obstruction of the upper airway causes the mechanical and hemodynamic changes that may alter the cardiac output. These pathophysiological changes eventually cause oxidative stress. Granger et al. (6) found that oxidative stress was involved in the ischemia-reperfusion injury of the heart disease.

Oxidative stress produces excessive reactive oxygen species (ROS). In normal aerobic metabolism, the balance between oxidation and reduction is dynamically maintained. However, the imbalance between them may disrupt the antioxidant defense and lead to the excessive formation of ROS (7). At the same time, oxidative stress can selectively activate the pro-inflammatory pathways (8). ROS and inflammatory mediators can act together on myocardial subcellular structures such as proteins, nucleic acids, and mitochondria, causing myocardial metabolic dysfunction and structural changes. In the pro-inflammatory pathways, Ca2+ is an important regulator of ROS production (9), and mitochondria is a known pool of calcium. The reduced Ca2+ concentration in the mitochondria leads to a decreased ATP production, while the Ca2+ overload in the mitochondria may cause excessive ROS production, resulting in a series of myocardial pathophysiological changes (10). Oxidative stress induced by intermittent hypoxia can induce endoplasmic reticulum stress by activating the angiotensin II-phospholipase C-trisphosphate (AngII-PLC-IP3) pathway, which induces the release of Ca2+ from the endoplasmic reticulum into the cytosol and leads to Ca2+ imbalance (11).

The transient receptor potential canonical (TRPC) channel is a classical calcium channel widely distributed in mammalian cells, but the TRPC2 is not expressed in humans (12). In recent years, increasing attention has been paid to the physiological and pathological roles of TRPCs due to its wide expression (13). Some studies have found that the activation of TRPC channels is closely related to the occurrence and development of cardiovascular diseases. For example, TRPC1 is involved in the proliferation, migration and apoptosis of vascular smooth muscle cells (14-17); TRPC3 expression is associated with the hypertension (18), atrial fibrillation (19), arrhythmia, cardiomyocyte hypertrophy (20) and myocardial fibrosis (19). The expression of TRPC4 channel increases in the endothelial cells (21,22). TRPC6 is involved in the process of myocardial hypertrophy (20) and myocardial ischemia-reperfusion injury (23). Recently, TRPC7 has been found to be also involved in the myocardial ischemia-reperfusion injury (23). Thus, TRPCs are closely related to the pathogenesis of cardiovascular diseases including the OSAHS induced cardiovascular diseases. To investigate the role of TRPC in the pathogenesis of OSAHS, a rat model of OSAHS was established by intermittent hypoxic exposure, and the protein and mRNA expressions of TRPCs were detected in the heart by Western Blotting and qRT-PCR, respectively.

This study was approved by the Ethics Committee of Xinjiang Medical University (IACUC-20170214045). Sprague Dawley rats (SD rats) were provided by the Experimental Animal Center of Xinjiang Medical University. Eighteen male SD rats, 15-17 w of age (at the time of surgery) were used in the present study. Animals were housed for 1 week before experiment and then randomly assigned to the experimental group (n=9) and the control group (n=9). In the experimental group, rats were placed in a chamber and exposed to intermittent hypoxia for 8 h (10AM-6PM) once daily. In the hypoxic exposure, rats were exposed to 8.5% oxygen for 1 min and then air (21% oxygen) for 1 min. Blood gas analysis was performed after 4 weeks (24,25): the arterial oxygen partial pressure was 20.9–29.7 mmHg, the blood oxygen saturation was 31.2–58.3%, and the blood oxygen partial pressure was 71.6 mmHg when they were exposed to air (21% oxygen). 106.4 mmHg, blood oxygen saturation was 92.2–97.4%, which was in line with the diagnostic criterion for human severe OSAHS (SaO2 <80%). Among then, 1 rat in the experimental group and one rat in the control group died in the experiment. After hypoxic exposure, the rats were sacrificed and the hearts were harvested for detection of TRPC expressions.

The heart tissues (25–50 mg) were homogenized and total RNA extracted with 1 mL of Trizol. Then, 2 µL of RNA was reversely transcribed into cDNA, which served as templates for amplification. The primers used in the PCR were synthesized in the Ouyi Biotech Co., Ltd in Xinjiang Province (Table 1). 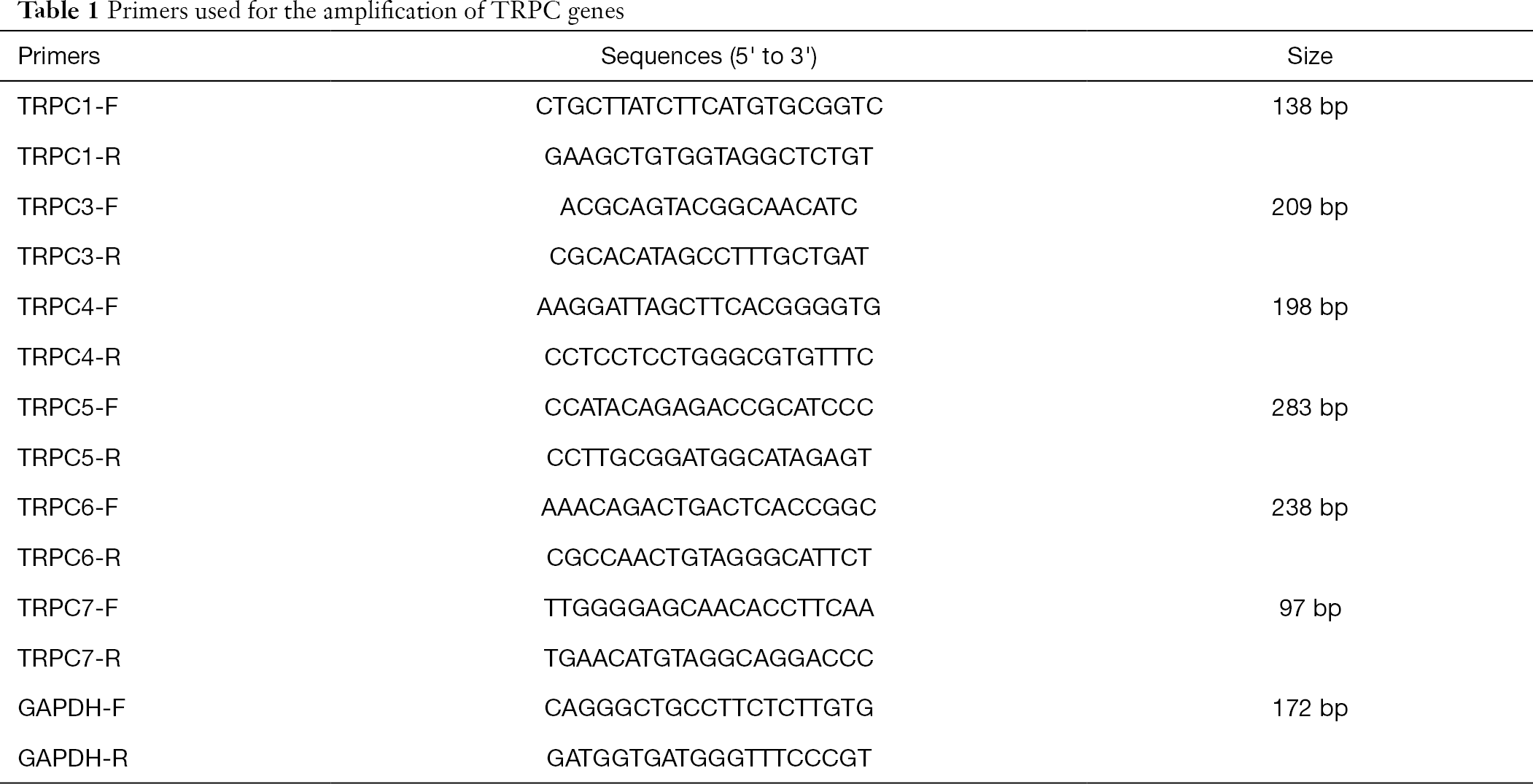 The heart tissues were homogenized and lysed in 40 µL of RIPA with protease inhibitor (AR0105; Boster), and then the homogenate was centrifuged at 12,000 rpm for 15 min at 4 °C. The supernatant was collected, and the protein concentration was determined with BCA method (DQ111-01). Then, the proteins were mixed with 5× SDS-PAGE loading buffer (containing β-mercaptoethanol), and the mixture was boiled at 100 °C for 5 min to denatured proteins. Then, the mixture was centrifuged at 12,000 rpm for 5 min. The supernatant was collected and subjected to electrophoresis (12% separating gel and 5% stack gel, followed by protein transferring at 300 mA for 2 h. The membrane was blocked in 5% non-fat milk for 1 h at room temperature and then incubated with primary antibody at 4 °C over night (anti-rabbit TRPC6 (D3G1Q; 1:500; CST, anti-TRP 7 (N64A/36; 1:500, CST), anti-TRPC5 (1C8; 1:100, Santa cruz). The membrane was washed in TBS-T (PH 7.6) and then incubated with horseradish peroxidase conjugated secondary antibody, followed by visualization with enhanced chemiluminescence. The protein bands were scanned and analyzed with AlphaEaseFC 4.0 software. The expressions of TRPC1, TRPC3 and TRPC4 were undetectable, but the expressions of TRPC5, TRPC6 and TRPC7 were detectable.

The results in Table 2 indicate that the ratio of RNA sample A260/A280 is an RNA purity test method, and RNA samples with a ratio ranging from 1.8 to 2.1 are considered acceptable. The sample of HVL213, HVL215, HVL216 of normal group and HVL201, HVL202, HVL203, HVL205, HVL206, HVL209 of test group were qualified. Figure 1 shows that in the electrophoresis chart, 28S and 18S have higher brightness, 5S is weakest or no band, and the band is single intact, which is regarded as a qualified RNA sample. As shown in Figure 2, the expression of TRPC3, TRPC4, and TRPC5 in the OSAHS group was significantly higher than in the control group (P<0.05). 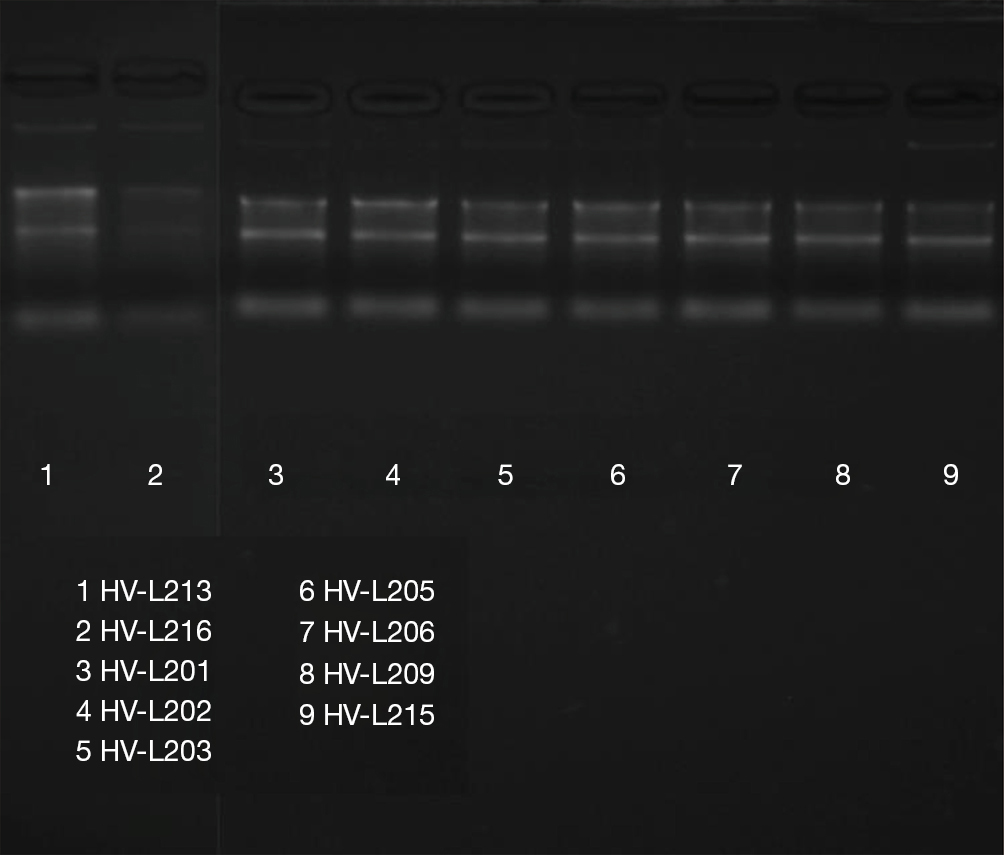 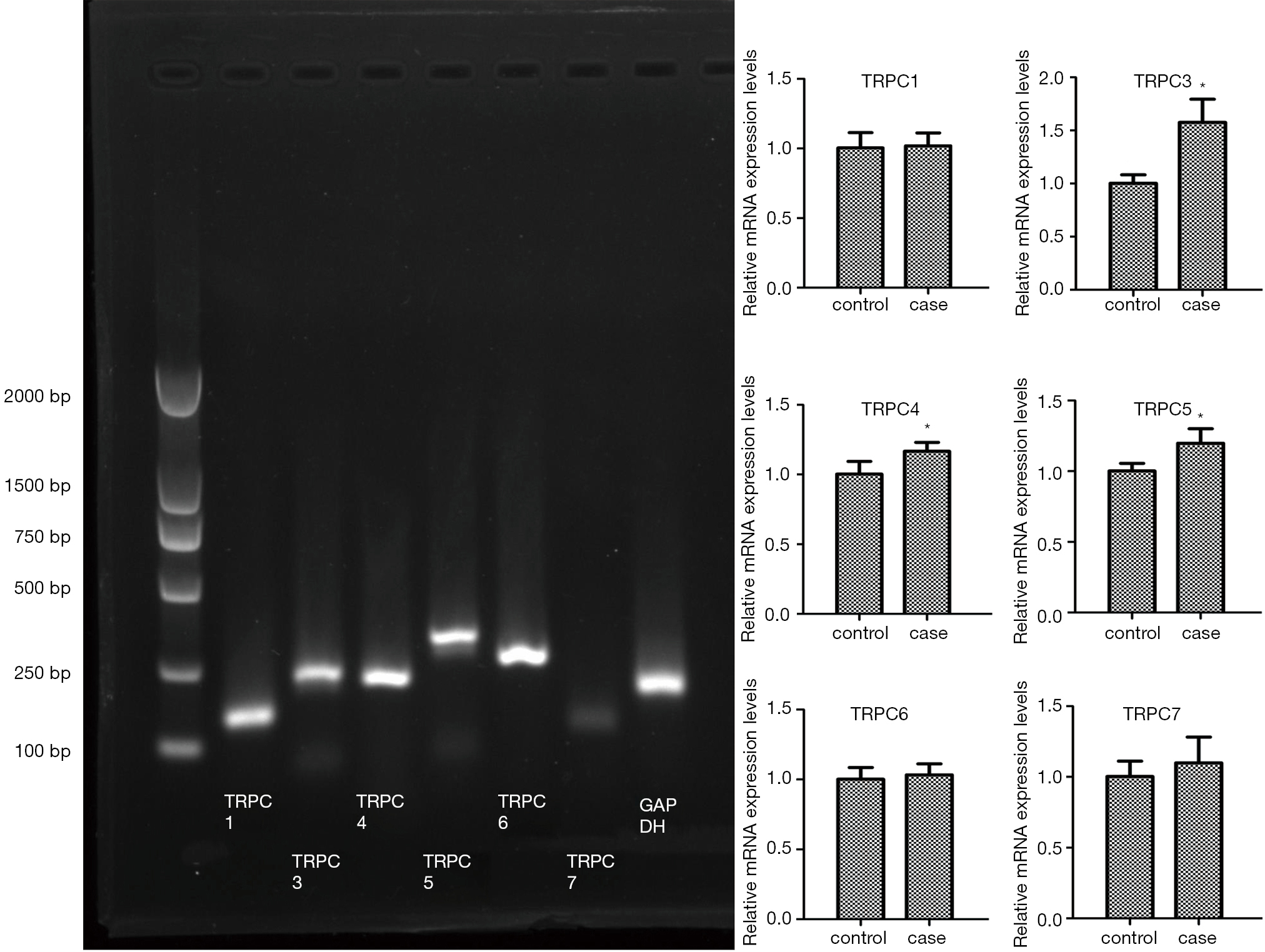 Protein expression of TRPC by Western-blot

The protein sample concentration value was greater than 5.0 µg/µL and the protein concentration is acceptable (Table 3). Table 4 suggests that the expression of TRPC5 protein in the heart tissue of OSAHS rats was statistically significant (P<0.05) (Figure 3). 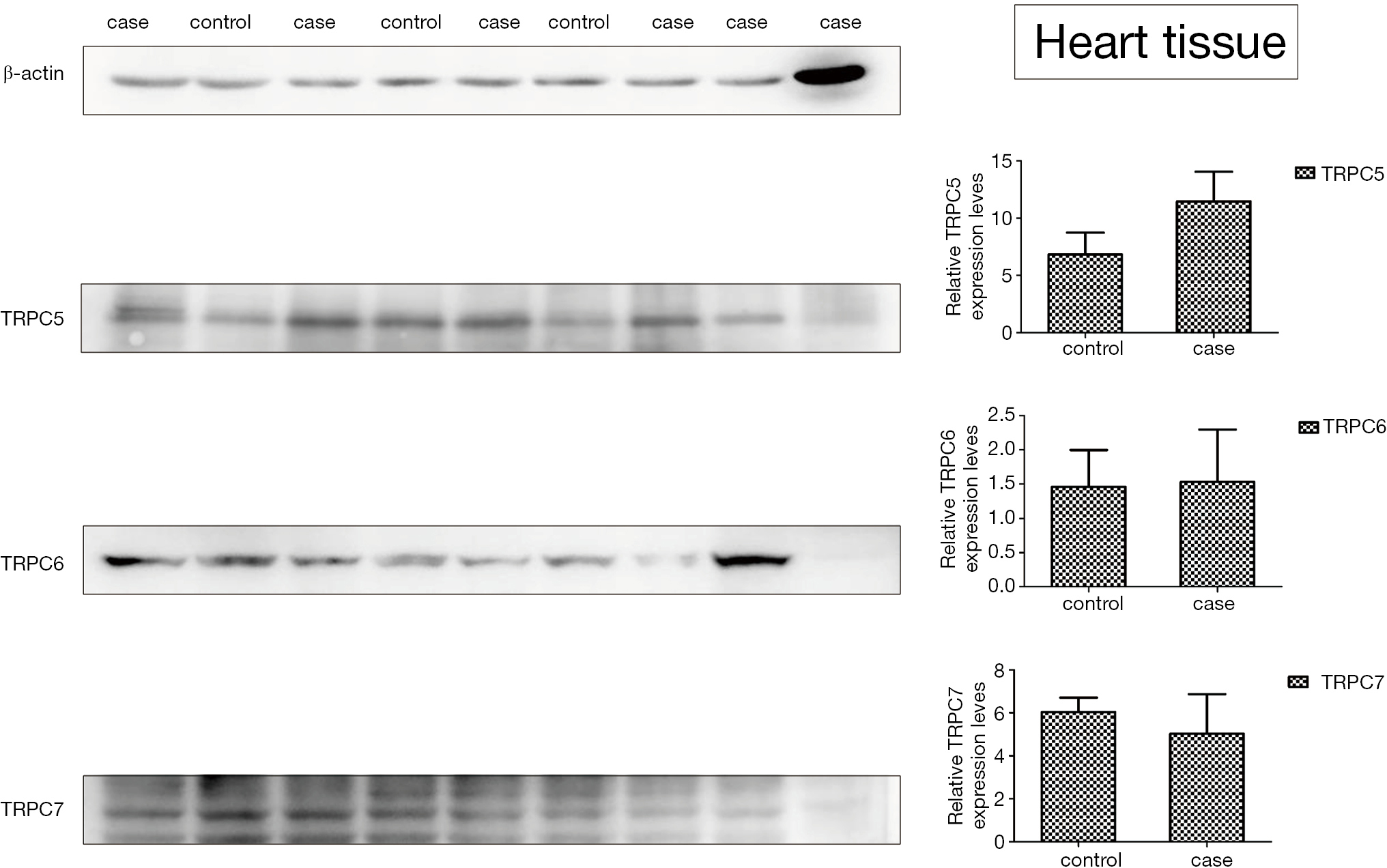 Figure 3 Expression of TRPC5 protein in the heart tissue of OSAHS rats.

TRPC5 channel is one of TRPC channels. It is not only a non-selective cation channel with four specific structures, but also a non-voltage-gated cation channel mainly permeable to Ca2+. TRPC5 mainly regulates the permeability of microcirculation vessels to intracellular free Ca2+ (29). The TRPC5 channel is mapped to q23 in the human X chromosome and mainly expressed in the central nervous system, kidney and cardiovascular system (30). The activation of TRPC5 channel via the phospholipase C (PLC) signaling pathway is its primary mechanism of action. Upon binding of the agonist to the G-protein coupled receptor or tyrosine receptor, the PLC is activated to hydrolyze phosphatidylinositol bisphosphate (PIP2) to produce inositol trisphosphate (IP3) and diacyl- glycerol (DAG), and then the DAG can be metabolized to arachidonic acid and linolenic acid. The IP3 acts on the endoplasmic reticulum or sarcoplasmic reticulum causing Ca2+ release in the calcium reservoir. When the calcium depletion is exhausted, the TRPC channel on the cell membrane is activated to initiate Ca2+ influx. This is called calcium influx of the calcium reservoir manipulation, the loaded channel is store-operated Ca2+ channel (SOCC), and TRPC5 channel is a kind of store-operated Ca2+ channel (31). In recent years, some studies have focused on the role of TRPC5 channel in the pathogenesis of diseases of the kidney (32), tumor (33,34) and nerve (35,36). Studies have shown that TRPC5 channels are involved in the proliferation, contraction, migration, and hypertrophy of vascular smooth muscle cells (37). Ca2+ is an important regulator of ROS production, and Ca2+ overload in the mitochondria can lead to excessive ROS production and cause a series of myocardial pathophysiological changes.

In this study, a rat model of OSAHS was established via intermittent hypoxia (IH) exposure, and the mRNA and protein expressions of different TRPCs were detected in the heart.

Conflicts of Interest: All authors have completed the ICMJE uniform disclosure form (available at http://dx.doi.org/10.21037/apm.2020.04.08). The authors have no conflicts of interest to declare.

Ethical Statement: The authors are accountable for all aspects of the work in ensuring that questions related to the accuracy or integrity of any part of the work are appropriately investigated and resolved. This study was approved by the Ethics Committee of Xinjiang Medical University (IACUC-20170214045).