PFD is a common disorder which affects women of all ages, but there is a heightened risk for old women. Aside from the impact on their day-to-day lives, patients often suffer huge psychological pressure because of the specialized nature of PFD (2).

Domestic studies have shown that the incidence of female PFD is as high as 58.70%, with pelvic organ prolapse (POP) being the most common (48.3%) and stress urinary incontinence (SUI) followed (8.7%) (3). Another retrospective cross-sectional study pointed out that female PFD accounted for 72% of POP and SUI accounted for 66% (4). Although research on related risk factors of PFD is not uncommon, findings vary due to differences in population, culture, living habits, and other factors in these reports (5,6). To date, there has been no report on the status of PFD in urban women in Xi’an. This study set out to analyze the prevalence of PFD in urban women in Xi’an and the risk factors that influence the incidence of PFD, with the aim of providing reference for the prevention and treatment of PFD in the future.

Women in two urban areas of Xi’an were selected for inclusion in this study, based on a multi-stage sampling method. A total of eight communities across the two urban areas (two streets in each urban area and two communities per street) were involved. A convenient sampling method was performed to screen for women who met the requirements. The inclusion criteria were as follows: (I) the place of domicile is in the urban area of Xi’an; (II) aged from 18 to 65 years; (III) have a history of sexual activity; and (IV) with full awareness/consciousness and able to cooperate to complete the investigation. Patients who met any of the following criteria were excluded from the study: (I) long-term increase in abdominal pressure with constipation, asthma, or chronic cough for more than one month; (II) sciatica; (III) previous history of pelvic surgery; or (IV) cannot cooperate to complete the investigation due to cognitive or conscious dysfunction. Informed consent was obtained from of the subjects who participated with the investigation.

The investigation was conducted by a team comprising gynecologists and nurses at the community health service centers, under the organization and assistance of cadres of the neighborhood communities. The questionnaire survey was conducted face to face. After undergoing routine gynecological examination, the confirmed or suspected patients were rechecked using a pelvic floor function screener at the hospital to confirm PFD, with reference to the Pelvic Floor Distress Inventory (PFDI-20) (7), ICS International Diagnostic Standards for Stress Urinary Incontinence (8), and the International Quantitative Staging Standards of Prolapse of Pelvic Organs (9).

Statistical analysis was carried out with SPSS, version 17.0 (IBM Corp). Data were expressed as n (%), and the comparison between groups was assessed with Chi-square test. Multivariate logistic regression analysis was used to investigate the risk factors of PFD. A Sig (two-tailed) test was conducted, and P<0.05 was indicated statistical significance.

The characteristics of the survey subjects 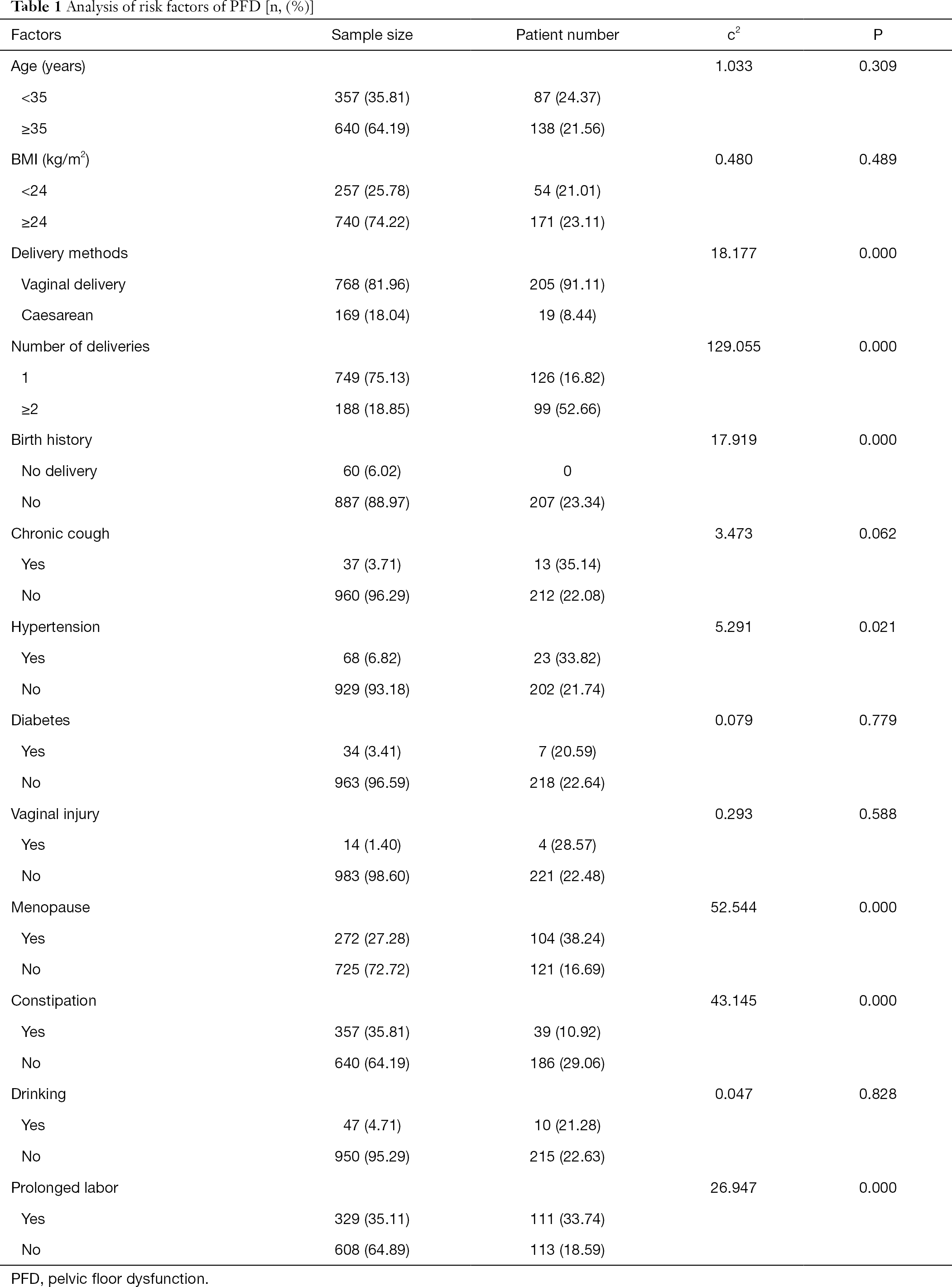 Prevalence of SUI and POP

Analysis of risk factors of PFD

The prevalence of PFD was significantly higher in women who had experienced vaginal delivery, ≥2 deliveries, combined hypertension, menopause, constipation, or prolonged labor duration compared with those who reported cesarean section, 1 delivery, or no hypertension, menopause, constipation, or prolonged labor (P<0.05). No significant association was identified between other factors and the prevalence of PFD.

Multivariate logistic regression analysis was performed using the occurrence of PFD as the dependent variable, while the factors shown in univariate analysis to have statistical difference served as covariates. This analysis showed that vaginal delivery, ≥2 deliveries, menopause, and prolonged labor duration were all independent factors of PFD (P<0.05, Table 2).

This study indicated that the prevalence of PFD in urban women in Xi’an is 22.57%, which is lower than the 54.70% prevalence reported for Henan by Hu et al. (10), but similar to the 24.50% in the Shijiazhuang area reported by Du et al. (11) The variation in these findings may be attributed to differences between the subjects of these studies. Unlike the study of Hu et al., which focused on women in urban and rural areas, only urban women were enrolled in our research. In comparison with urban women, rural women have increased risk of PFD because they are more likely to face risk factors such as vaginal delivery and heavy physical labor. Although this study showed a lower prevalence of PFD in urban women in Xi’an than in some other cities in China, a prevalence of 22.57% is still very high and is worthy of further attention. Moreover, our results showed that the prevalence of SUI and POP in PFD in the urban women in our study was 55.11% and 28.44% respectively, which bears a similarity to several Chinese and international studies and suggests that the screening and prevention of these two PFD diseases need to be strengthened.

The results of multivariate logistic regression analysis showed that women who had experienced vaginal births, ≥2 deliveries, menopause, and prolonged labor duration had a significantly higher risk of PFD, which is similar to the reports by Ye et al. (12). The reason for this might be that vaginal delivery increases intra-abdominal pressure and causes damage to muscle and connective tissue, and as the number of deliveries increases, the damage sustained by the pelvic floor muscles also increases; therefore, the risk of PFD increases along with vaginal birth and the number of deliveries. Other factors like menopause and prolonged labor duration can also increase the risk of PFD. Menopause sees a decline in estrogen levels and weakening of fascial tissue by fibroblast collagen synthesis, and prolonged labor can increase bladder neck displacement (13).

PFD has been reported to be the result of a combination of factors. Wang reported that women with a history of hysterectomy, menopause, and pregnancies or ≥3 deliveries had an increased risk of PFD (14). Meanwhile Jiang et al., identified factors such as older age, a higher number of delivery times, high BMI, constipation and overweight newborns to be independent risk factors of PFD (15). The different conclusions in these studies suggest that there is much to be debated about the risk factors of PFD. The difference in the results of this study compared with the two studies above may be explained by the difference in research subjects, research design, and understanding of risk factors, as well as its our method of data collection.

Based on the results of this study, the prevention and treatment of PFD need to be addressed through the following steps. Firstly, women’s PFD-related knowledge should be strengthened to increase awareness of PFD, and the importance of visiting doctors in a timely manner to prevent PFD at an early stage should be communicated, especially for perimenopausal women (16). Secondly, the benefits of postpartum rehabilitation training should be emphasized. Postpartum women should carry out pelvic floor muscle exercises from 1 week postpartum, and passive pelvic floor muscle exercises after 6 weeks postpartum to reduce or delay the occurrence of PFD; Yao et al. reported that pelvic floor muscle rehabilitation for postpartum women can reduce or delay the occurrence of PFD (17).

In addition, previous studies have reported that the risk of PFD could increase with age. A report by Hu et al. indicated that besides vaginal delivery and number of deliveries, age was also a high-risk factor of PFD, indicating that although most women displayed no specific clinical symptoms when they were young, pelvic floor ligament relaxation symptoms gradually appeared as they grew older and their body functions gradually deteriorated (10). A similar report from Zhang et al. also showed postpartum PFD to be closely related to age (18). However, we used 35 years as the age cut-off line in this study and found that there was no statistical difference in the prevalence rate of PFD in women of different ages. This finding differed somewhat from previous reports and might attributed to different age stratifications or study objections that existed in the other studies. In Hu’ s report, the women were classified into 6 age brackets: 20–29, 30–39, 40–49, 50–59, 60–69, and ≥70 years old, and the objections in Zhang Ke’s survey were mainly postpartum women, aged between 20 and 40 years old; meanwhile, the age range in this study was 18 to 65 years old. Therefore, the relationship between age and PFD need to be further explored in future studies.

In summary, the high prevalence rate of PFD in urban women in Xi’an should be granted great attention. The present study found that the prevalence of PFD was higher in women with vaginal delivery, delivery times ≥2, menopause or prolonged labor. In the future, the prevention and treatment of PFD should focus on the above population, strengthen the publicity and education of the population, encourage them to see a doctor in time, and strengthen the screening measures, so as to realize the early detection, diagnosis and treatment of PFD, and evaluate the effect of prevention and control to adjust the intervention strategies and measures continuously. However, this study also had certain limitations; for example, the collection of risk factors was not comprehensive enough. This needs to be addressed and improved by collecting and analyzing a larger range of indicators as part of future research.

Conflicts of Interest: All authors have completed the ICMJE uniform disclosure form (available at http://dx.doi.org/10.21037/apm-20-784). The authors have no conflicts of interest to declare.

Ethical Statement: The authors are accountable for all aspects of the work in ensuring that questions related to the accuracy or integrity of any part of the work are appropriately investigated and resolved. Informed consent was obtained from of the subjects who participated with the investigation.