Developmental dysplasia of the hip (DDH) is a common bone and joint deformity in infants. Early diagnosis and treatment can effectively prevent claudication, femoral head necrosis, and even limb disability (1-3). Those who are positive for physical examination or have high risk factors for DDH (breech birth, positive family history, etc.) will receive ultrasonic scanning and be classified by Graf as soon as possible (4-6). Currently, Pavlik harness is the routine treatment for DDH children at 0–6 months (7,8). The success rate of reduction is 63–93% and depends on multiple factors such as disease severity and the age at diagnosis (9). The study by Ömeroğlu et al. (10) proposed that the success rate of Pavlik harness decreased gradually with the increase of age or Graf classification. Therefore, in clinical settings, Pavlik harness treatment is the first choice for Graf type IIc–III but not for Graf type IV (11).

In clinic, adjustment of the treatment protocol by assessing the hip reduction after 3 weeks of Pavlik Harness treatment is common (most DDH children achieve reduction within 3 weeks) (12). However, the adjusted treatment may prolong the treatment course, reduce the success rate of traction plaster and increase the risk of femoral head necrosis (13). Tiruveedhula et al. (14) found that if the treatment of DDH children is adjusted to traction plaster after the failure of Pavlik harness treatment, the femoral head necrosis rate is 28%, which is much higher than that of patients treated with traction plaster directly (8%). This indicates that there is a high risk of failure and complications in the treatment adjustment. Furthermore, continuous compression of the posterior wall of the acetabulum will further increase the difficulty of reduction if DDH children with no or unstable reduction for more than three weeks. It will decrease the success rate of eventual reduction and increase the incidence of femoral head necrosis (15,16). Therefore, it is of great importance to predict the reduction outcome as soon as possible within the 3 weeks and adjust the treatment protocol in time to improve the success rate of eventual reduction. However, the research of early prediction of the reduction outcome is limited.

In the present study, the DDH children received clinical and ultrasonic examinations once a week (3 weeks total) during the Pavlik harness treatment. The changes of the hip joint α angle, β angle, and femoral head coverage (FHC) at the first, second, and third week were observed to evaluate the accuracy of ultrasound features in predicting the reduction outcome of Pavlik harness treatment within 3 weeks. It is hoped that the findings of this study can contribute to improving the treatment protocol by reducing the rate of eventual failure. We present the following article in accordance with the STARD reporting checklist (available at http://dx.doi.org/10.21037/apm-20-889).

This is a prospectively study, and 215 DDH children treated in the Department of Pediatric Orthopedics, Ningbo Women & Children’s Hospital from June, 2016, to September, 2019 were consecutively recruited. The inclusion criteria were as follows: (I) age at diagnosis ≤6 months; (II) Graf type IIc, D, and III; and (III) complete and determinate clinical and imaging data. DDH children with obvious muscle imbalance, pathological ligament relaxation, or joint stiffness were excluded and. Patient demographics, including gender, age at diagnosis, and side of pathology data, were recorded after recruitment. All children’s families signed informed consent, and this study was approved by the ethics committee of Ningbo Women & Children’s Hospita (No. NWCH20160217).

The Philips EPIQ7 ultrasound system (Philips Healthcare, Seattle, WA, USA) with an L12-5 linear array probe (5–12 MHz) was used. The infant was placed into the lateral position, and the hip joint was slightly flexed. The probe was placed on the outside of the hip joint, and the long axis of the probe was positioned parallel to the body axis. The scanning was initiated to obtain the standard coronal section acoustic image of the hip joint. The α and β angles of children were measured, and the DDH children were typed blindly according to Graf classification (17) (Type IIc: 43°≤α≤50°, β≤77°; Type D: 43°≤α≤50°, β>77°; Type III: α<43°, β not performed due to poor development of the bony acetabular roof) (Figure 1). FHC (18) was calculated as d/D, in which d represents the distance from the inner edge of the femoral head to the baseline of the ultrasonic image, and D represents the femoral head diameter (Figure 1). 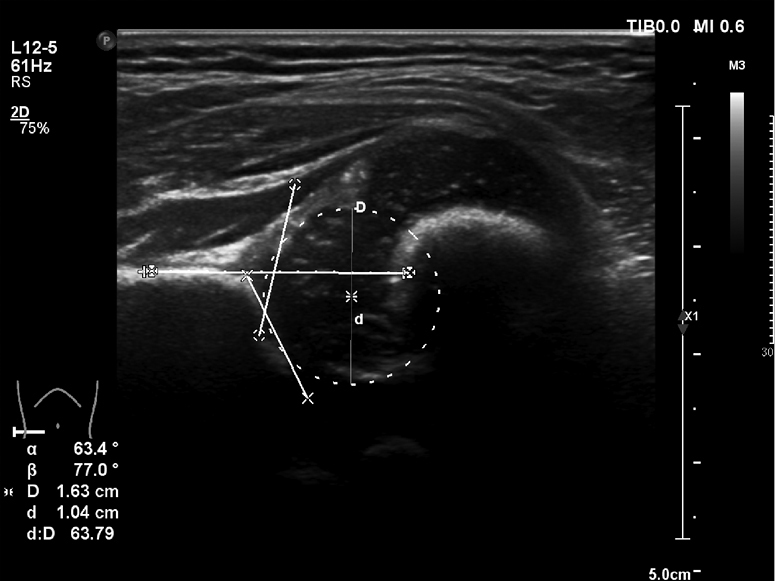 The initial treatment protocol for all DDH children was with the Pavlik harness. We laid the brace on the bed and placed the child in the brace. The child’s arms were put into the shoulder straps, and the lower limbs were placed into the foot straps. Then, the flexion bands and abduction bands were tightened to flex the child’s hip joint to 80°, extend it 60°, and flex the knee to 50°. The sling was worn for 23 h each day, and a hip ultrasound review was performed once a week within 3 weeks. The hip reduction was evaluated, and the α and β angles, along with the FHC, were recorded each week.

The hip joint stability of DDH children was evaluated by Harcke’s test after the third week of Pavlik harness treatment (19). According to the reduction outcome, the DDH children with stable reduction evaluated by ultrasound clinical examination were included in the success group. They continued to receive Pavlik harness treatment for 3 months, and then fixed with a nighttime brace until the acetabulum developed normally. The DDH children with no or unstable reduction were included in the failure group, and other treatment methods (e.g., traction plaster) were required for them.

All information was recorded anonymously and processed using Statistical Product and Service Solutions (Chicago, IL,USA) software (version 22.0) and plotted by R package version 3.6.2 and MedCalc version 12 (MedCalc Software, Ostend, Belgium). The numerical data were expressed as mean ± SD and independent sample t-tests were used for comparison. The categorical variables were expressed as numbers, and the comparison between the two groups was conducted with the chi-square test. Univariate analysis was used to compare the success group and failure group for the purpose of assessing the differences regarding age at diagnosis, gender, Graf classification, side of pathology, and ultrasound features (i.e., α and β angle and FHC). Independent multivariate predictors of outcome were identified using logistic regression in which all variables with P<0.05 from the univariate analysis were entered into the stepwise model. Repeated-measures analysis of variance was used to calculate the differences in hip joint ultrasound trends between the success and failure groups. Receiver-operating characteristic (ROC) curve was plotted to analyze the predictive accuracy of the efficacy of Pavlik Harness treatment at the first, second, and third week. 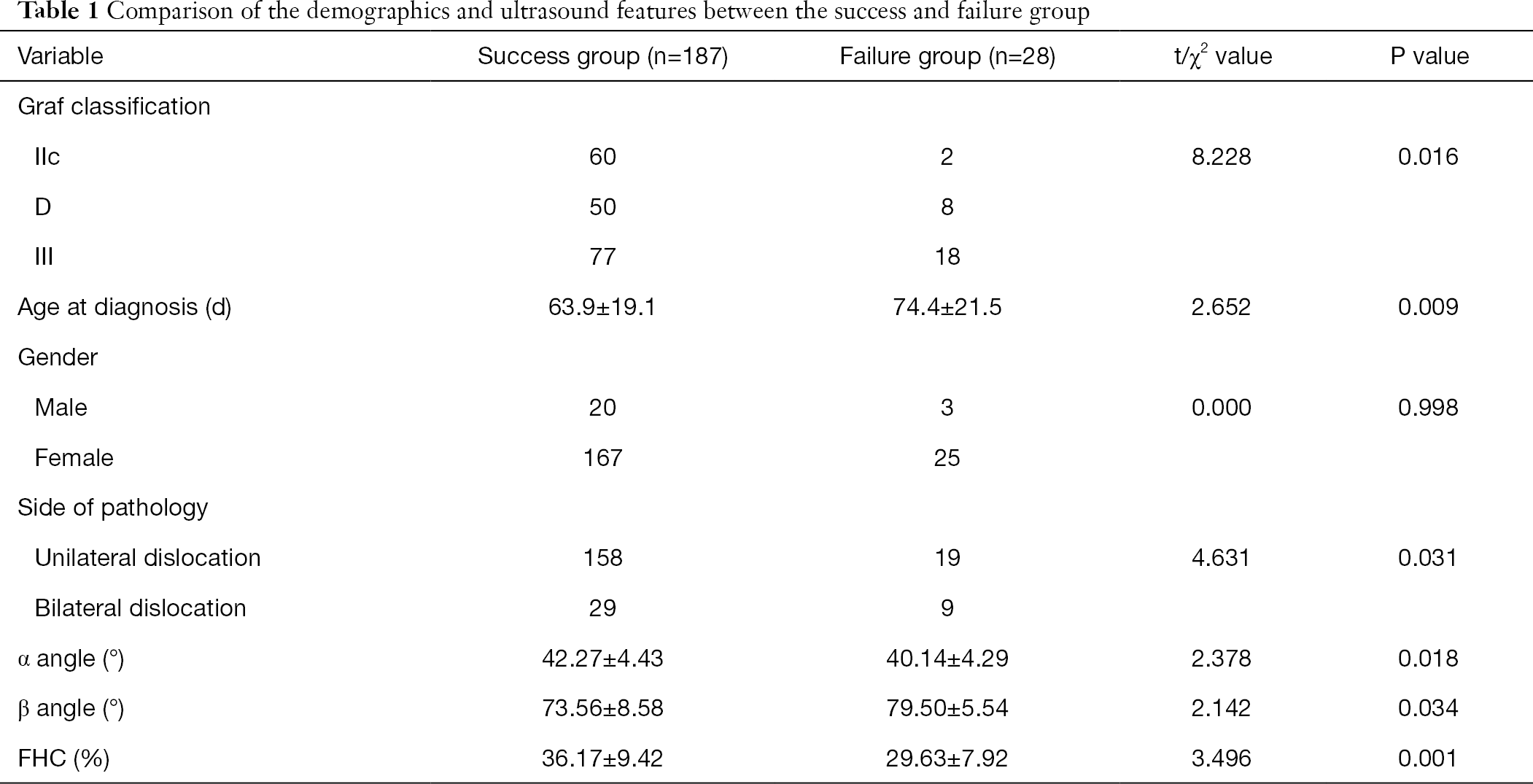 Predictors for the 3-week outcome of Pavlik harness treatment

Logistic regression analysis showed that the gender and ultrasound features were not predictors for the outcome of Pavlik harness treatment (P>0.05), whereas Graf type III (P=0.036), bilateral dislocation (P=0.031), and age at diagnosis (P=0.021) were associated with an increased risk of Pavlik harness failure in the multivariate analysis (Figure 2). 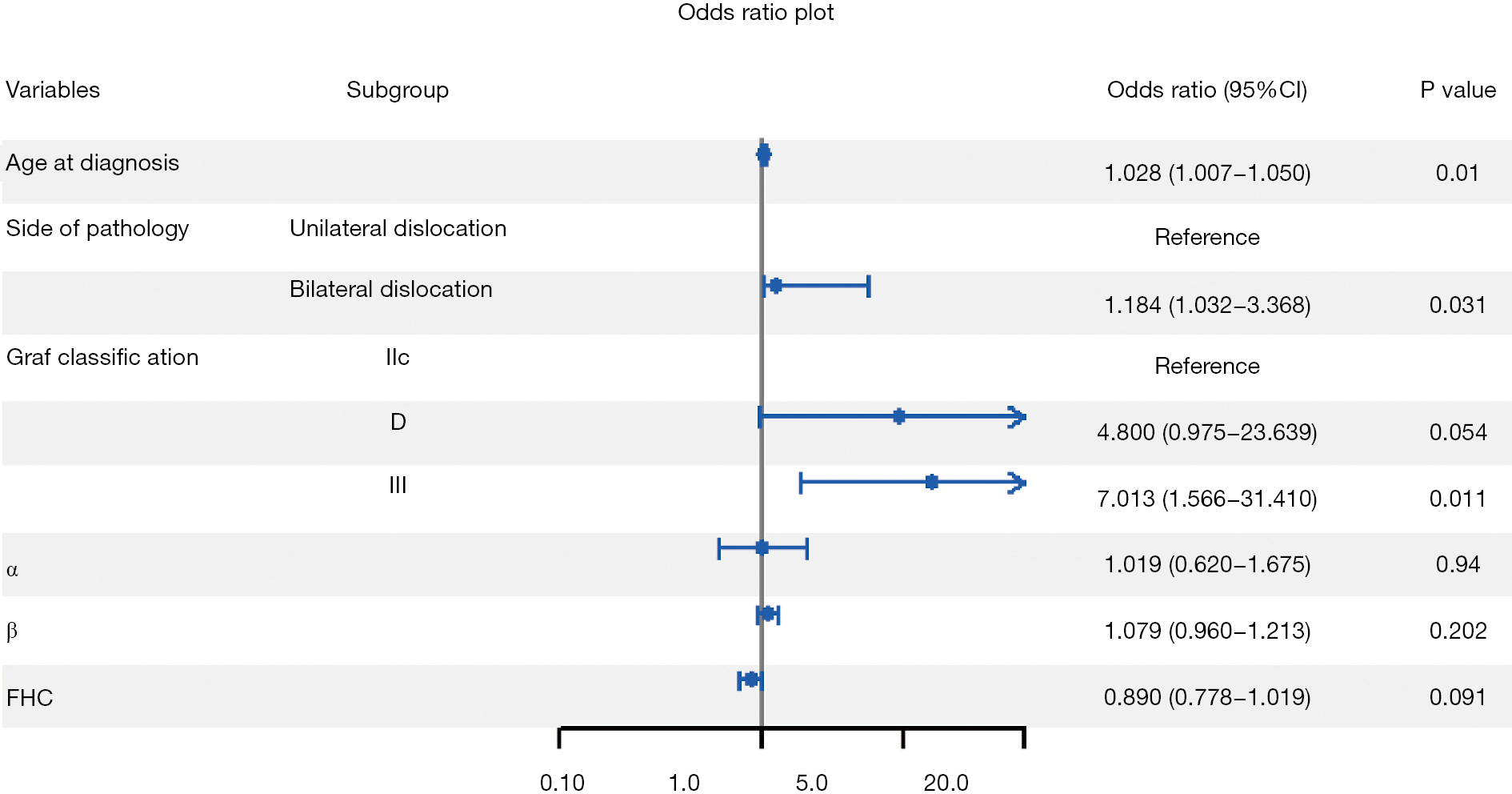 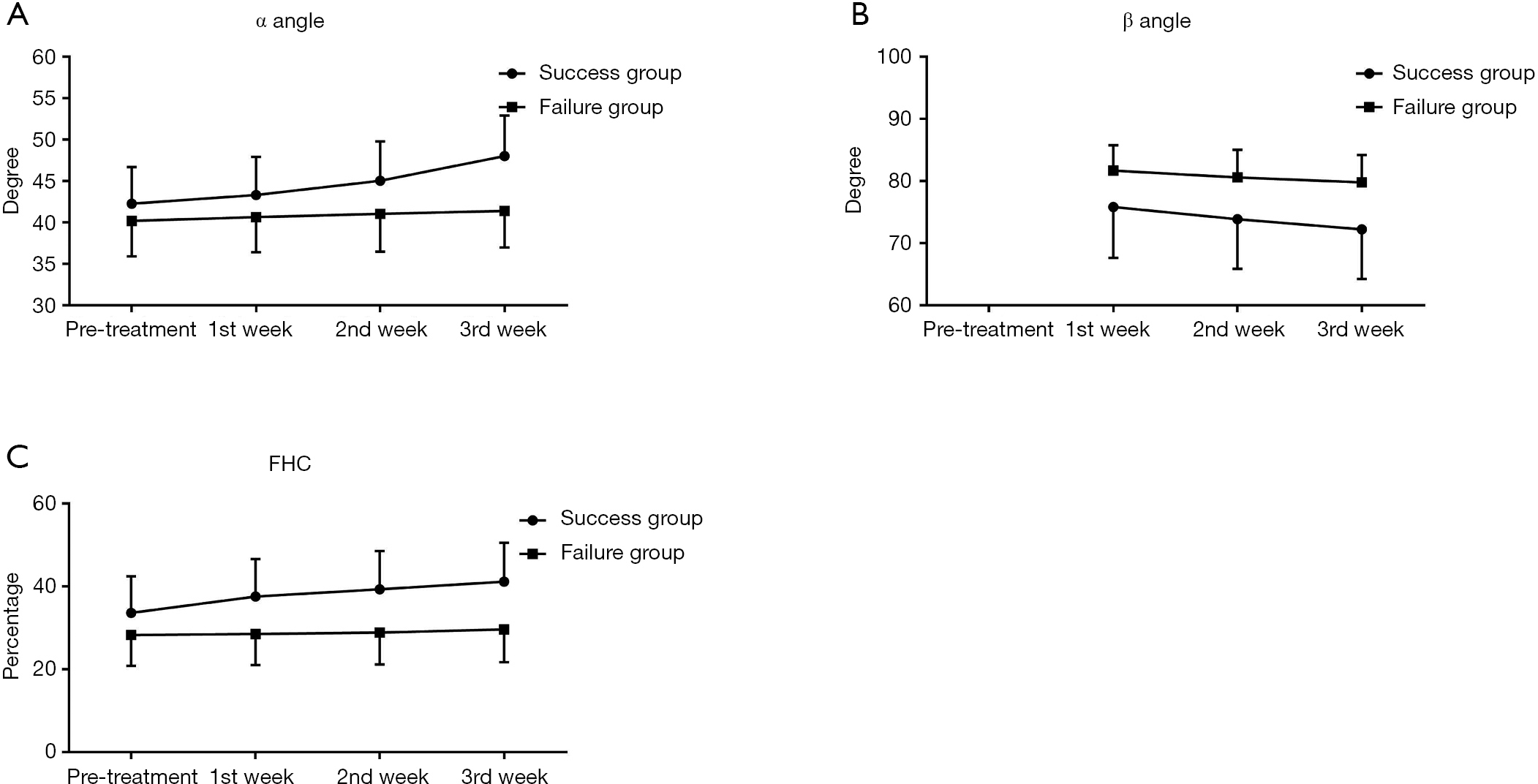 The ultrasound features (α and β angle and FHC) could better predict the treatment outcome, showing greater accuracy as time progressed. The area under curves (AUCs) of α and β angle and FHC at the third week were greater than those at the first week. The AUCs of β angle at different weeks were higher than those of α angle and FHC, but the AUC of β was still ≤0.9 even at the third week. This indicates that each ultrasound parameter alone (α angle, β angle, or FHC) could not accurately predict the treatment outcome within 3 weeks (Table 3 and Figure 4).

Figure 4 ROC analysis of the ultrasound features (α and β angle and FHC) in predicting the outcome of Pavlik harness within 3 weeks. (A) The first week; (B) the second week; (C) the third week. FHC, femoral head coverage. 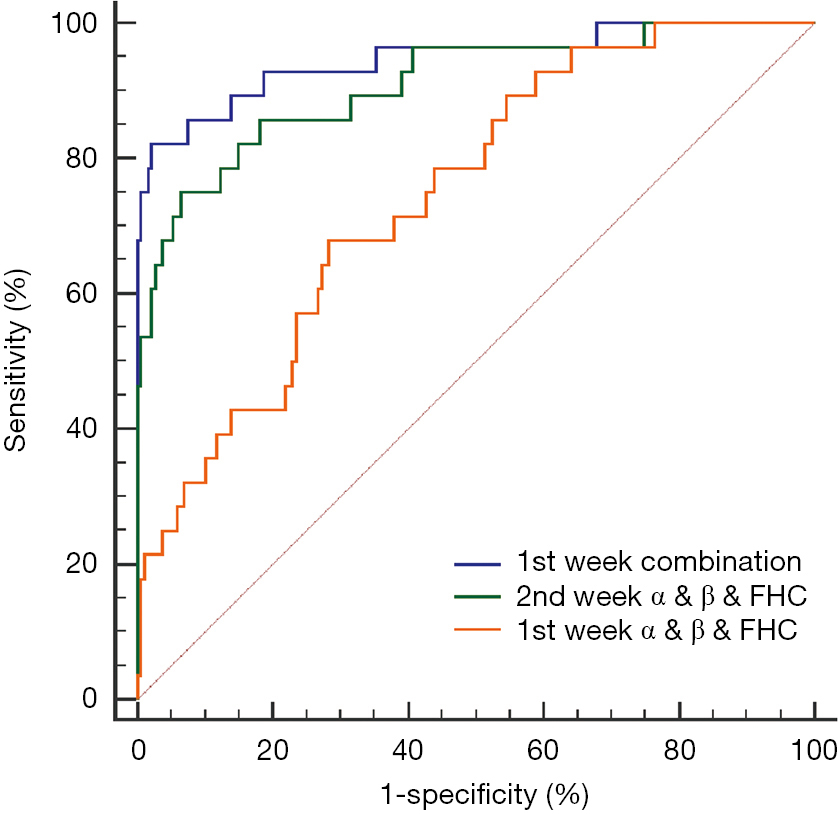 Figure 5 The combined model including the ultrasound features (α and β angle and FHC) and the influencing factors (Graf classification, age at diagnosis, and side of pathology) in predicting the outcome of Pavlik harness treatment after 3 weeks. FHC, femoral head coverage.

Independent predictors for the 3-week outcome of Pavlik harness treatment

The ROC analysis in this study found that with the advancement of treatment, the accuracy of α and β angle and FHC in predicting the outcome gradually improved, and all reached the highest AUC at third week. The accuracy of β angle was higher than that of α angle and FHC (but the AUC was still <0.9). This indicates that α angle, β angle, or FHC alone cannot accurately predict the reduction outcome after 3 weeks of Pavlik harness treatment.

Therefore, we established prediction models by combining all of the above-mentioned ultrasound features. The accuracy of the combination of the first week of α and β angle and FHC for predicting the outcome was still low (AUC =0.746). However, when combined with the second week of features, the prediction accuracy was higher (AUC >0.9), meaning that the combined ultrasound features (α and β angle and FHC) at the second week of Pavlik harness treatment could accurately predict the reduction outcome.

In order to explore the opportunity of accurately predicting the treatment efficacy earlier, we combined the first week of ultrasound features with the independent predictors (Graf classification, age at diagnosis, and side of pathology). The results showed that the accuracy of the combination was significantly improved (AUC =0.931). The advantage of the combined prediction model is that it is expected to predict the reduction outcome of Pavlik harness treatment after 3 weeks in advance, so as to adjust the subsequent treatment plan as soon as possible, which can increase the success rate of other treatments (mostly traction plaster) and reduce the risk of femoral head necrosis.

Some limitations to this study should be addressed. First, when predicting the eventual efficacy of DDH children, in addition to considering the timing of changing, the impact of changed treatment protocol on hip joint development must also be considered. Moreover, the eventual efficacy will still be affected by the failure of the Pavlik harness even if it has been replaced after 3 weeks. In future research, we plan to explore a method to accurately predict the eventual reduction outcome of DDH children before treatment. For children at risk of poor reduction, treatment with traction plaster may be preferable as it can avoid the adverse effects of treatment change.

The combined model of ultrasound features (α and β angle and FHC) at the second week of Pavlik harness treatment could accurately predict the reduction outcome after 3 weeks. A combined model consisting of these ultrasound features together with independent predictors (Graf classification, age at diagnosis, and side of pathology) could accurately predict the reduction outcome at the first week. This combined prediction model may help assess the efficacy of Pavlik harness treatment as early as possible, thus facilitating the timely determination of the subsequent treatment protocol and improving the prognosis of DDH children.

Reporting Checklist: The authors have completed the STARD reporting checklist. Available at http://dx.doi.org/10.21037/apm-20-889

Conflicts of Interest: All authors have completed the ICMJE uniform disclosure form (available at http://dx.doi.org/10.21037/apm-20-889). The authors have no conflicts of interest to declare.

Ethical Statement: The authors are accountable for all aspects of the work in ensuring that questions related to the accuracy or integrity of any part of the work are appropriately investigated and resolved. All children’s families signed informed consent, and this study was approved by the ethics committee of Ningbo Women & Children’s Hospital (approval ID: NWCH20160217).