According to a 2018 global report from the International Agency for Research on Cancer, the number of new cases of ovarian cancer (OC) was 295,144, and the number of deaths was 184,799 (1). OC accounts for 2.5% of all malignancies and 5% of female cancer deaths due to its low survival rates, primarily driven by advanced-stage diagnoses (2). Because of a lack of typical early symptoms and the absence of practical measurements for early detection, more than 70% of patients, are newly diagnosed with advanced OC (3). Epithelial ovarian cancers (EOCs) are common in women of all racial groups, accounting for 90% of all OC cases. The mortality rate of EOC declined by 33% between 1976 and 2015 because of reductions in incidence and improvements in treatment (4).

Lymphatic spread is an important prognostic factor for EOC (5); however, the therapeutic role of systematic lymphadenectomy (SL) for advanced EOC is still controversial. The core issue of the controversy is whether an SL should be performed to stage or improve survival. “NCCN Guidelines Ovarian Cancer Version 1.2019” suggests that if macroscopically complete resection is possible, resection of clinically negative nodes is not required. Retrospective studies have shown that the rate of lymph node involvement in advanced EOC ranges between 48% and 75% (6). If we miss these involved lymph nodes, which are also resistant to chemotherapy, patients of advanced EOC will develop recurrent disease and eventually die.

The controversy between randomized controlled trials (RCTs) and retrospective studies raises has given rise to a number of meta-analyses on SL for OC in recent years (7-9). However, none of the meta-analyses arrived at definite conclusions. Since then, many new studies including 1 well-designed RCT have been conducted, but it is still necessary to reevaluate the effect of SL. Moreover, the above-mentioned meta-analyses (7-9) mostly focused on all-stage OC; however, most gynecology oncologists agree that the effect of SL is mainly on early stage EOC. The present meta-analysis was designed to compare the survival outcome of progression-free survival (PFS) and overall survival (OS) between SL and unsystematic lymphadenectomy (USL) in advanced EOC.

Possible eligible studies were searched for in the PubMed, Embase, and Cochrane Library databases by two independent reviewers. Bibliographies of relevant studies were also scanned by us to identify additional studies. The literature search was limited to the period between January 1, 1994, and March 31, 2019. The following keywords were used for the search: “ovarian neoplasm”, “ovarian cancer”, “ovarian tumor”, “ovarian carcinoma”, “lymphadenectomy”, “lymph node dissection”, and “lymph node sampling”. All terms were expanded to include all subcategories to identify all published studies that fit the selection criteria. Only studies published in English were included in this meta-analysis.

Two reviewers independently abstracted the following parameters for each eligible study: first author, year of publication, study design, clinical stage, number of patients, period of follow-up, definition of SL and USL, hazard ratio (HR), and 95% confidence interval (CI) [upper limitation (UL), lower limitation (LL)] of PFS and OS. Any discrepancies between the two reviewers were discussed until consensus was reached, or the third reviewer served as a tiebreaker.

The aim of this meta-analysis was to compare the survival outcome between SL and USL. There were many studies that did not present the direct results of HRs and 95% CIs. Among some approaches for resolving this problem, the method by Meng et al. (10) was used to extract survival data (HRs and 95% CIs) from survival curves by using R software.

A total of 1,098 records were initially found based on the search criteria. After screening and exclusion, a total of 15 studies including 33,257 patients were eligible for this meta-analysis. A flow diagram of the study selection process is shown in Figure 1. 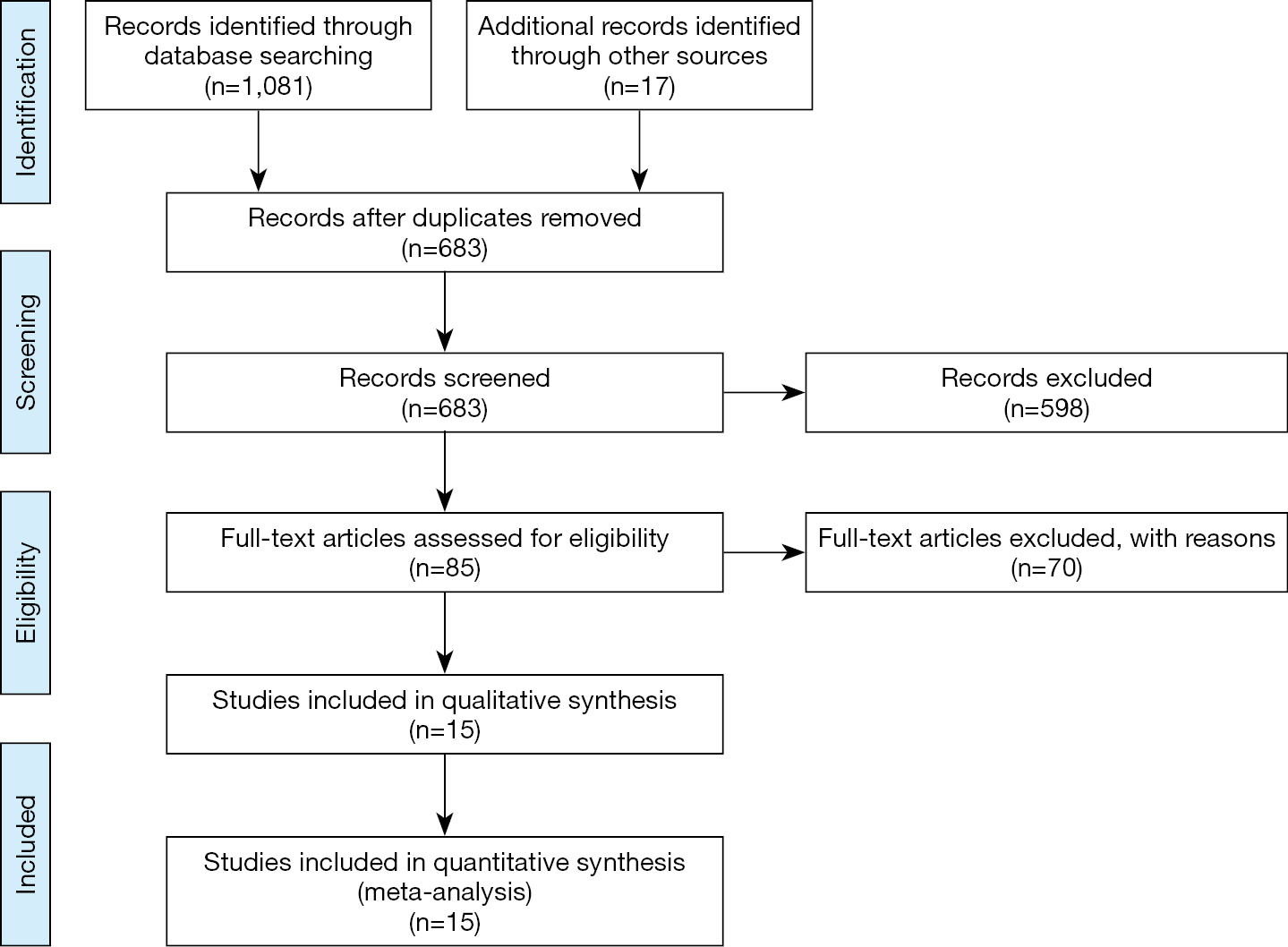 For RCTs, we used a modified Jadad assessment scale (12), in which a study is judged according to four broad aspects: randomization, concealment of allocation, double-blinding and withdraws, and drop-outs. A full score is 7, and a high-quality study is defined as >4 (see Table 1).

For observational studies, we used the Newcastle-Ottawa Assessment Scale (16), in which a study is judged according to three broad aspects: selection, comparability, and outcome. A full score is 9, and a high-quality study is defined as score >7 (see Table 2). 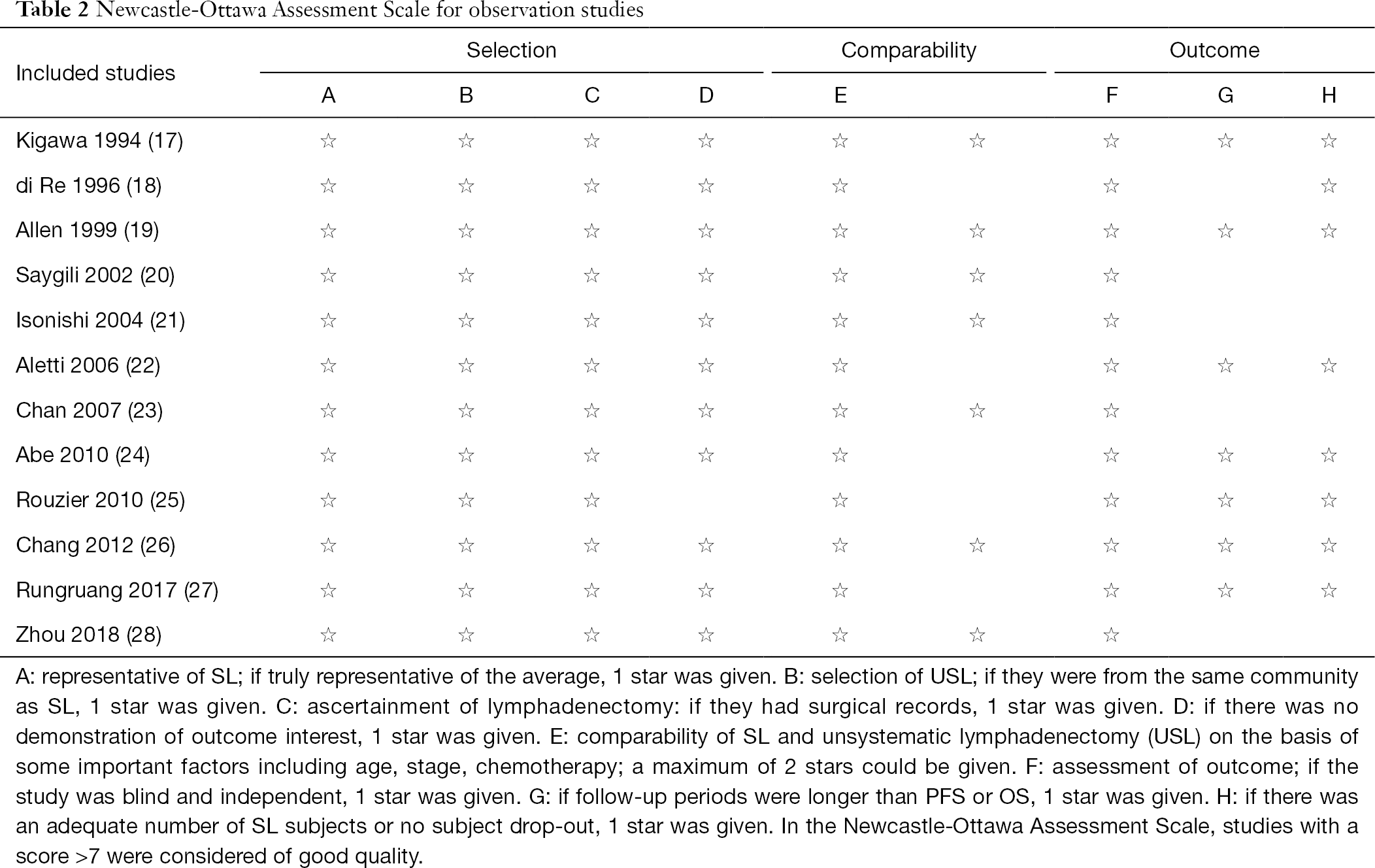 Of the literature included in this meta-analysis study, 3 studies were RCTs, and 12 studies were observational. Among the 12 observational studies, 3 studies were from the Surveillance, Epidemiology, and End Results (SEER) database. For this study, we divided patients into two groups based on whether SL was performed or not. There were 7,829 patients in the SL group and 25,428 patients in the USL group. The definitions of SL and USL are shown in Table 3. Likewise, the detailed characteristics are also shown in Table 3. 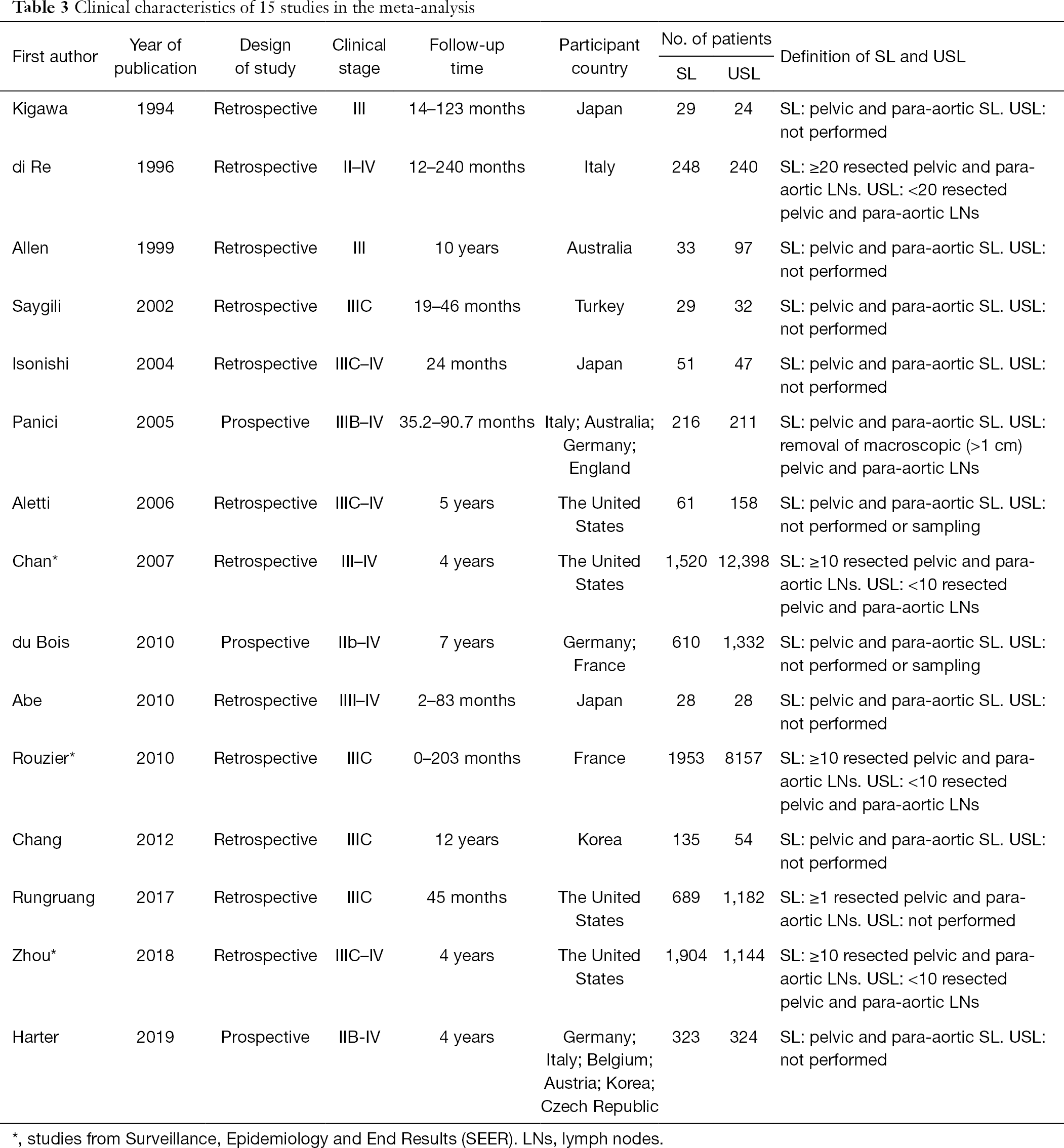 To investigate the role of SL in advanced OC on survival outcome, we conducted a meta-analysis using available information from 15 studies. Through considering some critical factors like selection bias, we separated RCTs and observational studies to compare the survival outcomes between SL and USL. There were two RCTs and three observational studies that conducted primary outcome (PFS) research. When we performed this meta-analysis according to the study design, no significant heterogeneities were detected (RCTs: I2=26%; observational studies: I2=0%), so the fixed-effects model was used. Two RCTs indicated that there was no difference in PFS between SL and USL (HR: 0.91; 95% CI: 0.81–1.04; P>0.05; Figure 2). On the other hand, 3 observational studies showed that SL improved PFS (HR: 0.93; 95% CI: 0.92–0.95; P<0.00001; Figure 3). 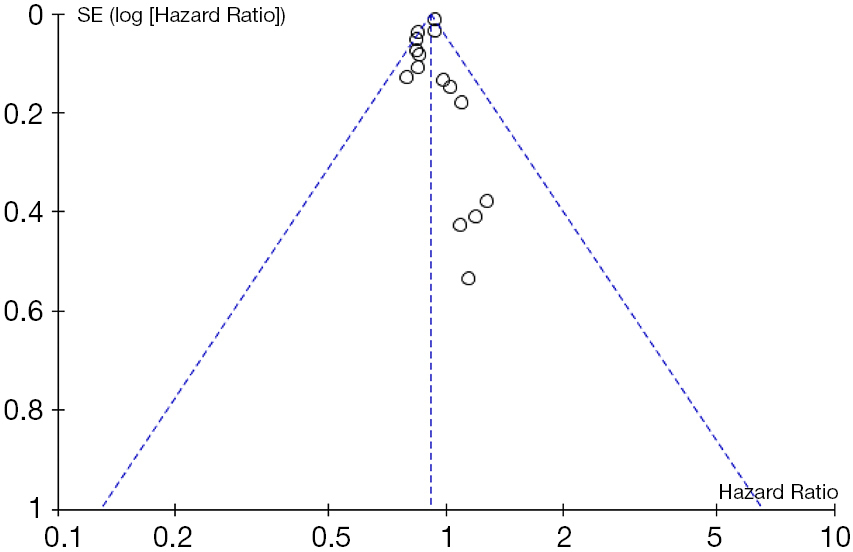 Figure 6 The funnel plot for 15 eligible studies in the meta-analysis.

In our analysis, RCTs showed that SL may not improve PFS in advanced EOC, but three observational studies showed that SL can improve PFS compared with USL in advanced EOC. The discrepancy between RCTs and observational studies may be due to the different research designs: we believe the RCTs were well-designed, while the observational studies could not avoid selection bias. However, even among two RCTs, the conclusions differed. The former RCT reported that SL could improve PFS while the lymphadenectomy in ovarian neoplasm (LION) RCT reported the opposite result. However, the pooling of the meta-analysis indicated that SL cannot improve PFS. There are two explanations for this, as far as we can surmise. Firstly, the LION RCT was more precise and homogeneous. It amended some flaws in the former RCT like a more extended follow-up period. It added level 1 evidence to the long-standing research. Secondly, the greater number of cases in the LION RCT increased the weight of this RCT, and thus the combined result indicated that SL does not improve PFS in women with advanced EOC.

There are more studies focusing on the role of SL for OS in advanced EOC. A similar result has been documented for the secondary outcome-OS. Three RCTs showed that SL does not improve OS, while 12 observation studies showed that SL can improve OS. Unfortunately, but not surprisingly, we could not obtain a consensus conclusion as to whether SL improves the survival outcome in advanced EOC from this meta-analysis. There were only 3 included RCTs in which the number of patients involved was not large enough to describe the effect of survival outcome of SL in advanced EOC. Although 12 observational studies were included in this meta-analysis supporting the benefit of SL in women with advanced EOC, we think they are less convincing because of obvious selection bias and the deviation of weight by 3 large scale studies from SEER. In addition, most of the early observation studies compared OS of patients who underwent lymphadenectomy, which ranged from SL to node sampling with USL. These studies showed considerable differences in OS between groups. Hence, these studies were limited and did not account for the selection bias that SL has more favorable prognostic features than USL in advanced EOC.

It is well known that residual tumor size is particularly crucial to survival benefit (29). Lymph node metastasis rate was detected in 74.6% of advanced EOC patients (30). In our meta-analysis, 12 observational studies demonstrated the survival benefit of SL. Kigawa et al. (17) reported that omentum and retroperitoneal lymph nodes were the most frequent sites of metastasis. Similarly, Paik et al. (31) investigated recurrent EOC patients with no gross residual disease after primary debulking surgery and concluded that lymph nodes were at higher risk of recurrence. If these tumor cells were removed, further residual tumor burden could be reduced, which can affect survival outcomes. Keyver-Paik et al. (32) evaluated the lymph nodes of advanced OC undergoing neoadjuvant chemotherapy and reported that lymph node dissection even of unsuspicious nodes should be performed. However, the LION trial, which is a powered, international, multicenter trial, found that a macroscopically complete resection did not improve according to the increased radicality of the procedure. Thus far, there have been 3 well-designed RCTs for advanced EOC all stating the same conclusion: SL does not improve survival outcomes but results in treatment burden and harm in patients. Some meta-analyses (7-9) have been performed to study the role of SL. Gao et al. (7) and Zhou et al. (9) concluded that SL could improve OS in advanced EOC while Kim et al. (8) suspected the active role of SL in advanced EOC. These meta-analyses included all stage OC studies, while the role of SL in stage I OC has already been confirmed. However, there were previously not many prospectively randomized, powered, international, multicenter trials. Nowadays, we included 1 necessary LION trial in our meta-analysis to update and reevaluate the role of SL in advanced EOC. Our meta-analysis is the first to include 3 RCTs to evaluate the role of SL in advanced OC. However, the controversy in the results between observational studies and LION raises several questions related to follow-up periods and the application of chemotherapy. In our meta-analysis, we included 15 studies which had OS and PFS results, but they rarely had data concerning side effects. Therefore, we did not analyze the side effects of SL, which is a limitation of our analysis. As a result, future randomized trials are needed to balance the risks and benefits of SL in advanced EOC (33). CARACO, an ongoing French trial (NCT0128490), scheduled to finish in 2022, is aimed at evaluating the impact of SL survival in patients with advanced EOC (34).

We look forward to this trial result to confirm the 3 RCTs result, so this issue can be conclusively resolved.

Funding: This work was supported by the Scientific Research and Technological Development Plan of Guangxi Zhuang Autonomous Region (No. 1140003A-33).

Conflicts of Interest: All authors have completed the ICMJE uniform disclosure form (available at http://dx.doi.org/10.21037/apm.2020.04.01). The authors have no conflicts of interest to declare.