Acute respiratory distress syndrome (ARDS) is a clinical syndrome characterized by acute onset of hypoxemia, bilateral pulmonary infiltrations and respiratory failure (1-3). In patients admitted to the intensive care unit (ICU), the incidence of ARDS is 10.4% (4), and its mortality ranges from 11% to 87% (5). The global burden of ARDS is an important global health issue and appears to be high in high- and upper-middle-income countries (6,7).

Metformin is a biguanide drug that is most commonly prescribed for the management of type 2 diabetes mellitus (DM) (8), due to its well-known hypoglycemic effect. Its pleiotropic effects might ameliorate inflammatory injuries in vivo based on its inhibition of the expression of pro-inflammatory factors in vitro (9-12). In several experimental animal models of acute lung injury, pretreatment with metformin preserves the alveolar-capillary permeability and decreases the occurrence and severity of acute lung injury in high-pressure ventilation (13). In a recent study, metformin reduced lipopolysaccharide-induced lung injury in a rat model and increased the expression of inflammatory factors. These mechanisms might be related to alleviating ARDS (14). However, there is not enough information on prior metformin therapy and mortality in patients with ARDS. A retrospective single-center cohort study reported no significant association between prior metformin therapy and 30-day mortality in ARDS patients with DM (15). However, the study was performed in 2005 with a small sample (n=128) of ARDS patients with DM.

This population-based cohort study was performed per the ethical standards of the institutional and national research committee at the Seoul National University Bundang Hospital (X-1903-531-902) and the Health Insurance Review and Assessment Service (NHIS-2019-1-274).

The medical records from the national database, which are stored and provided by the National Health Insurance Service (NHIS) in South Korea, were used. The NHIS is the country’s key institution for protecting the health of the nation, and is responsible for the management of national health insurance which safeguards the nation from disease, provides long-term care, and enables comfortable aging. In South Korea, all disease diagnoses, drug prescription information, and procedures should be registered in the NHIS database. The extraction of data was performed by a medical record technician in the NHIS center, who had no conflict of interest associated with this study.

All adult (≥18 years old) diabetic patients who were admitted to a hospital for ARDS treatment [International Classification of Diseases; ICD-10 codes of J80* and E10–E14 (DM)] from January 1, 2013 to December 31, 2017 were included in this study. For patients with multiple admissions (≥2) for ARDS treatment, only the most recent admission was considered for analysis. Patients with incomplete or missing data were excluded.

The ARDS patients with DM were divided into metformin users, defined as those who had been prescribed continuous oral metformin for ≥30 days before ARDS diagnosis, and the control, group which included all other patients.

The primary endpoint was any 30-day mortality after the initiation of ARDS treatment. The date of death of all ARDS patients was extracted until May 30, 2019, from the NHIS database. The secondary endpoint was overall survival time. The survival time was calculated from the date of initial ARDS treatment to date of death or May 30, 2019 for ARDS survivors.

The baseline characteristics of the patients were presented as mean with standard deviation for continuous variables, and numbers with percentages for categorical variables. First, we performed propensity score matching (PSM), which is known to reduce confounders in observational studies (16). PSM was performed without replacement at 1:1 ratio with caliper 0.2 via nearest neighbor method. All covariates were included in the PSM, and logistic regression analysis was performed to calculate propensity scores (PSs) as a logistic model. The absolute value of standardized mean difference (ASD) was used to determine the balance before and after PSM, and all ASDs <0.1 were used to determine that all covariates were sufficiently balanced through PSM.

After PSM, Cox regression analysis was performed in PS-matched cohort to investigate the hazard function of prior metformin therapy in 30-day mortality after initiation of ARDS treatment in patients, as compared to the control group. The results of the Cox regression analysis were presented as hazard ratio (HR) with 95% confidence intervals (CIs). Next, we performed multivariable Cox regression analysis for 30-day mortality in the entire cohort of all ARDS and diabetic patients as a sensitivity analysis. From this sensitivity analysis, we investigated the results derived from PS-matched cohort to generalize to all diabetic ARDS patients in South Korea. The proportional hazards assumption of the Cox proportional hazards model was tested using the log-minus-log plots. C-statistics were used to identify the C-index of the multivariable Cox regression models. There was no collinearity between the variables in the model as the variance inflation factor was <2.0. Finally, the survival time before and after PSM was estimated using Kaplan-Meier estimator for up to 365 days, considering that all diabetic ARDS patients were followed up for at least 450 days in this study. The survival time in the two groups was presented as median time with 95% CI. The log-rank test was used to test statistical significance of difference in survival time between the two groups. All statistical analyses were performed using the R software (version 3.6.1 with R packages), and P<0.05 was considered statistically significant.

From January 1, 2013 to December 31, 2017; 14,921 adult patients were admitted 17,022 times to the ICU for treatment of ARDS. Among the admissions, 2,101 were excluded due to multiple (≥2) admissions for ARDS treatment in a single patient. Only the last episode of hospital admission for ARDS treatment was included in the analysis. DM was diagnosed in 6,500 patients, and these patients divided into two groups; prior metformin users (n=2,876) and controls (n=3,624). After PSM, a total of 5,752 patients (2,876 patients in each group) were included in analysis (Figure 1). The results of comparison of characteristics between metformin users and control group before and after PSM were presented in Table 1. The ASDs of all covariates were below 0.1, indicating that the two groups were sufficiently balanced after PS matching. Figure S1 shows the distribution of PSs before (A) and after (B) PSM. The distribution of PS between the two groups became similar after PSM. 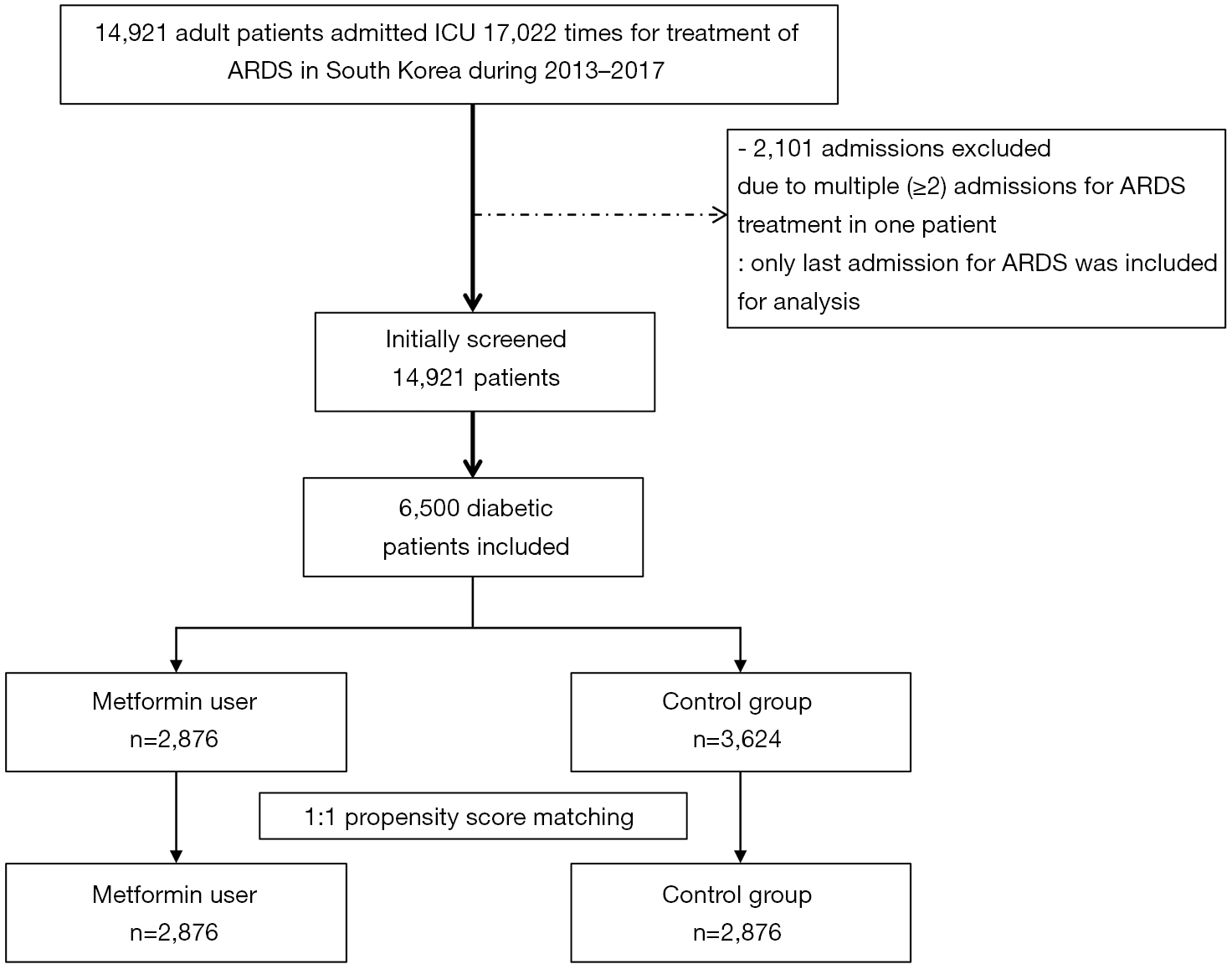 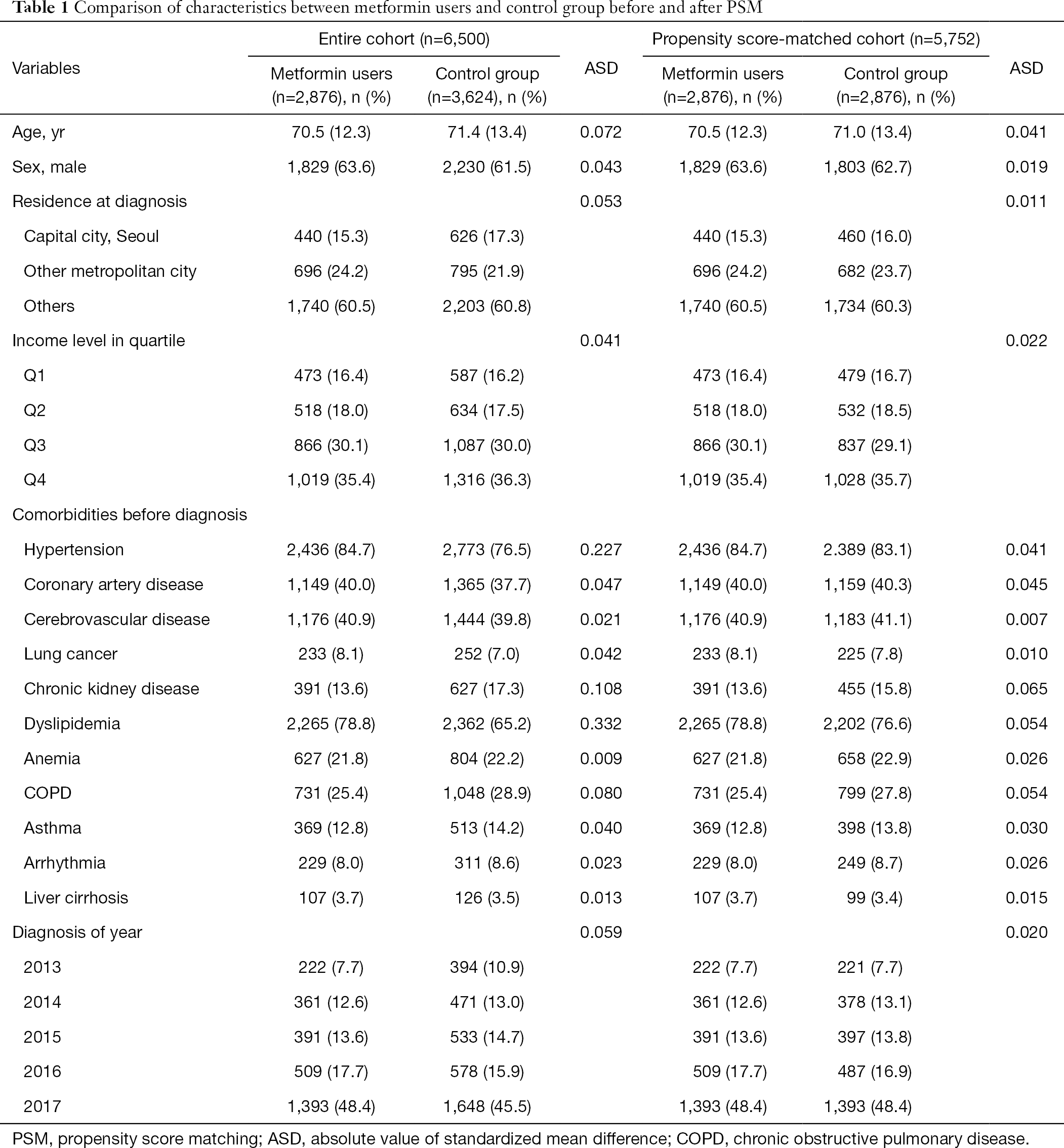 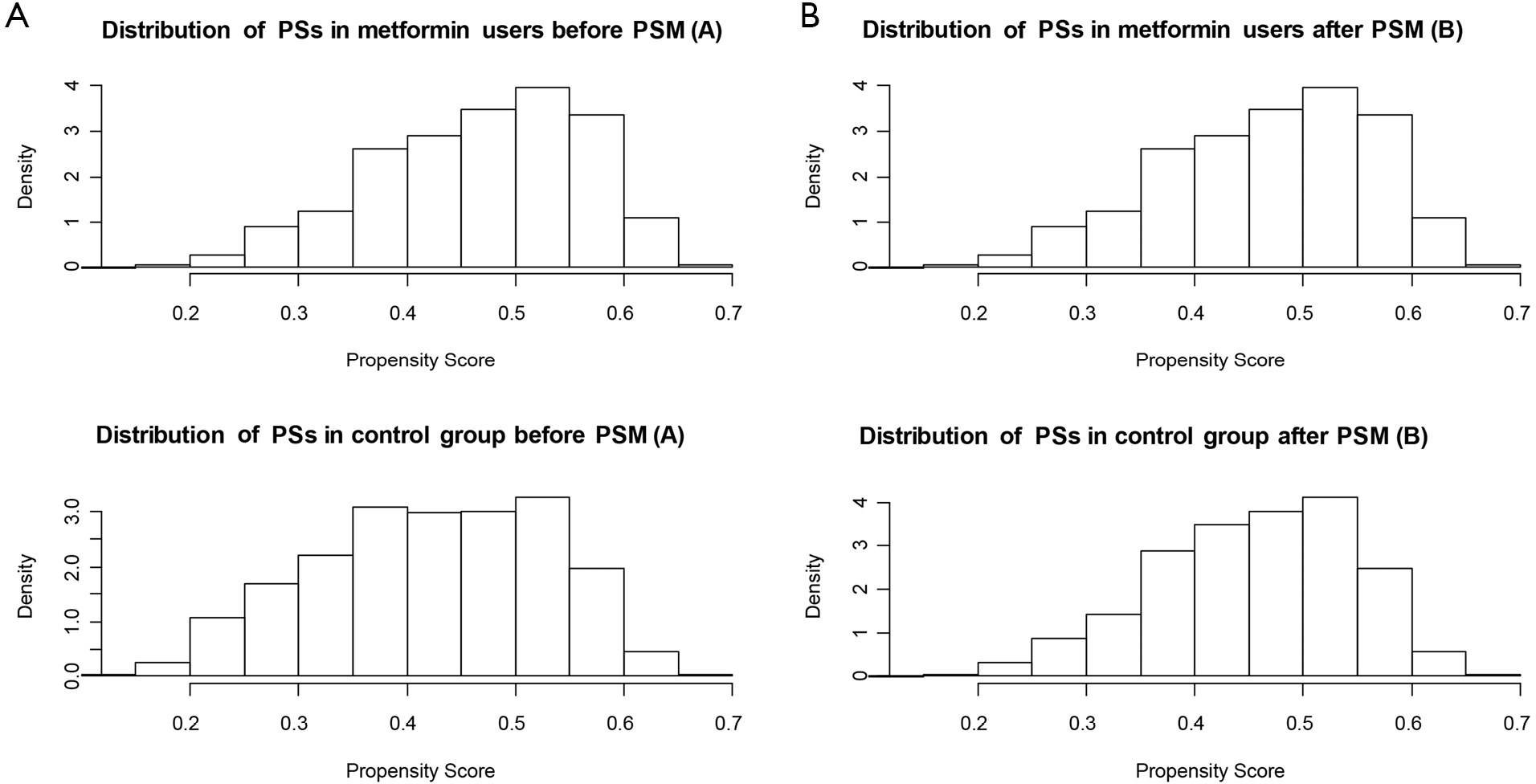 Figure 2 Kaplan-Meier curve of overall survival of metformin users and control group before (A) and after (B) PSM. PSM, propensity score matching. 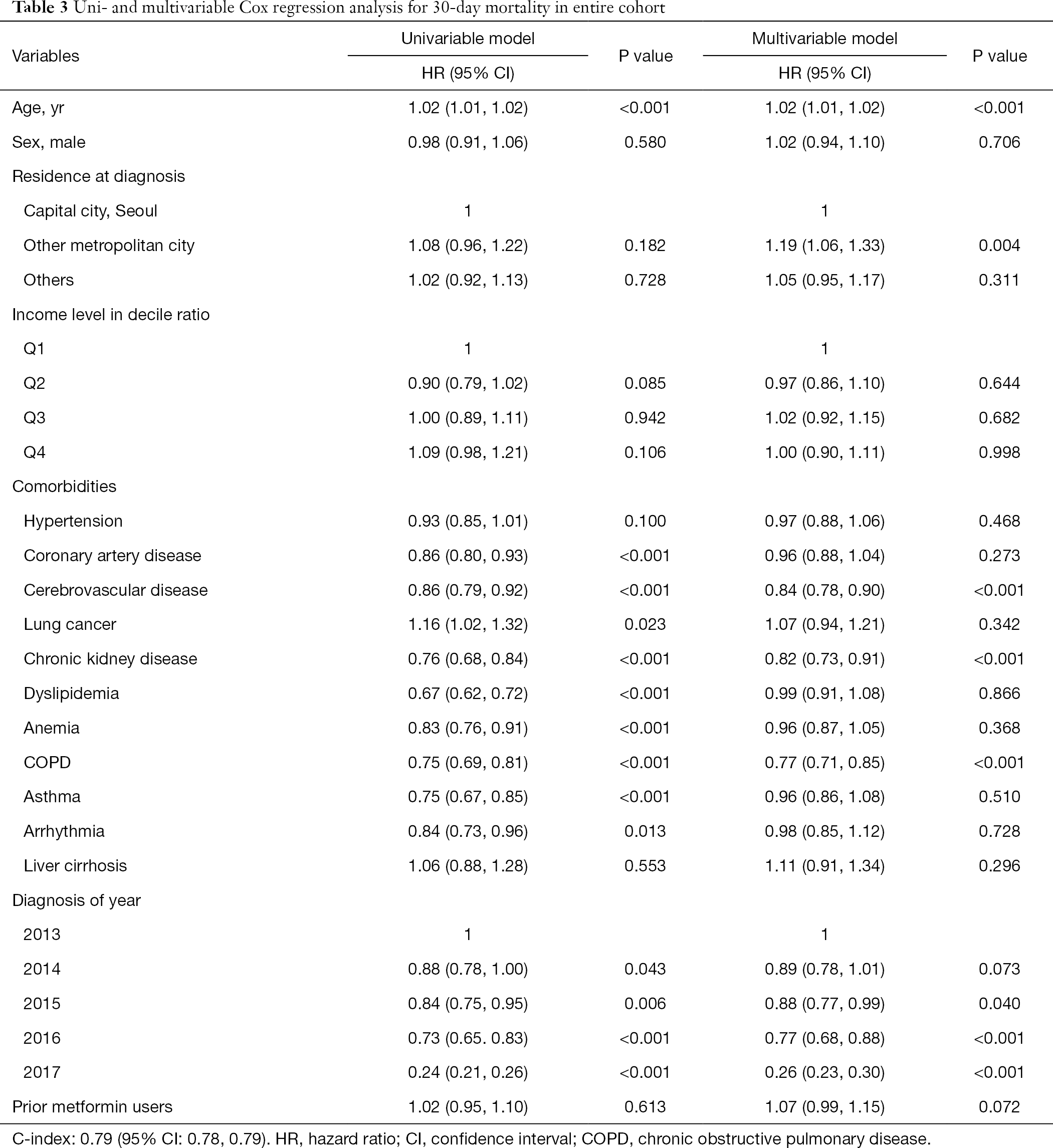 This population-based cohort study using nationwide data shows that prior metformin therapy is not associated with 30-day mortality in ARDS patients with DM. This association was similar in both the PS-matched cohort and multivariable adjustment of the entire cohort. Moreover, there was no significant difference in overall survival time after initiation of ARDS treatment for up to 450 days between prior metformin users and control group.

The results of this study coincide with the findings of a previous retrospective cohort study (15), suggesting that prior metformin therapy might not have potential benefits in ARDS patients with DM. However, previous animal studies report a reduction in lung injury by metformin therapy, possibly through various mechanisms (13,17). The current study findings could be explained by the following speculations. First, even though patients with prior metformin therapy before ARDS diagnosis were selected, metformin was not administered after ARDS diagnosis because most of the patients were intubated for ventilator care. Thus, blood glucose levels might have been controlled by other drugs such as insulin, in most ARDS patients with DM. In ICU practice, insulin is commonly used to control blood glucose levels in critically ill patients with DM (18). Another study reported the beneficial effects of metformin in decreasing inflammatory cytokines when added to intensive insulin therapy (19). The result might be different if metformin therapy were to be continued after ARDS diagnosis in DM patients instead of insulin therapy.

Second, ARDS is one of the fatal clinical syndromes with a mortality of up to 90% after diagnosis (5). In our study, the 30-day mortality was approximately 45%, and the median survival time in Kaplan-Meir curve was almost 40 days. Therefore, it is possible that the pleiotropic effect of prior metformin therapy might be limited in ARDS patients because there are other factors such as mechanical ventilation strategy (20) or prone positioning (21) that might be more closely related to prognosis in ARDS patients.

The differences between the current study and the previous retrospective cohort study must be carefully considered while interpreting the results (15). Both studies used PSM to adjust for confounders; however, the previous study included acute physiologic assessment, chronic health evaluation II scores, the simplified acute physiology score II scores, body mass index, heart rate, hemoglobin, lung injury score, and peak end-expiratory pressure. The current study did not include the above confounders due to limitation of data source. On the other hand, the current study included the income level, residence, and many other comorbidities before ARDS diagnosis, that were not included in the previous study. Despite the covariate differences in the PS model, it was notable that prior metformin therapy was not associated with 30-day mortality in both studies (15).

This study has several limitations. First, certain physiologic variables, such as body mass index, were not included in the analysis because the NHIS database does not contain this information. Second, we used the ICD-10 codes registered in the NHIS database to define comorbidities of ARDS patients; however there is a possibility that the diseases specified in the ICD-10 codes might have differed from the actual comorbidities of all ARDS patients with DM. Third, certain factors (the P/F ratio, simplified acute physiology score-II score, the acute physiology and chronic health evaluation II score, and ventilator strategy) that are closely related to ARDS prognosis were not studied. The NHIS database contains data regarding prescription of drugs and procedures only. Lastly, PS adjustment and multivariable adjustment controlled only the known confounders. The possibility of unmeasured and unknown confounders cannot be excluded.

Conflicts of Interest: Both authors have completed the ICMJE uniform disclosure form (available at http://dx.doi.org/10.21037/apm.2020.04.25). The authors have no conflicts of interest to declare.

Ethical Statement: The authors are accountable for all aspects of the work in ensuring that questions related to the accuracy or integrity of any part of the work are appropriately investigated and resolved. This population-based cohort study was performed per the ethical standards of the institutional and national research committee at the Seoul National University Bundang Hospital (X-1903-531-902) and the Health Insurance Review and Assessment Service (NHIS-2019-1-274).