Enhanced recovery after surgery (ERAS) might be a standard care in radical prostatectomy: a systematic review and meta-analysis

Enhanced recovery after surgery (ERAS) is a protocol aimed to reduce perioperative complications as well as the physical and psychological stress of surgical trauma. It is also described as fast-track surgery (FTS), because it accelerates patient rehabilitation, shortens the hospitalization period and reduce the medical costs. It was first performed by Kehlet in 1997 (7). It includes a series of evidence-based procedures, such as surgical, nursing, medical, anesthetic and perioperative managements (8).

We performed a comprehensive literature search on Embase, PubMed, the Clinicaltrials.gov (http://clinicaltrials.gov/), the Cochrane Library and CNKI Library to identify clinical trials that compared ERAS and conventional care. The search was done in all data published before May 2019. The search terms included: “ERAS”, “Enhanced recovery after surgery”, “Enhanced recovery”, “perioperative management”, “Fast-track surgery”, “FTS”, “Radical prostatectomy” and “Prostate cancer”. We also screened the reference lists of review articles. Additional studies were also retrieved by manual search in relevant journals. We exclusively included studies which were published in English and Chinese.

Studies were selected according to the Preferred Reporting Items for Systematic Reviews and Meta-Analyses (PRISMA) statement (14). Clinical trials that met the four listed criteria were included:

Trials were excluded if:

Two reviewers independently did literature screening, data extraction, and quality assessment of the trials. A third reviewer was involved to have a consensus were the two reviewers disagreed. From each article, the first author’s name, year of publication, study type, disease type, the number of patients, trial phase, treatment and control arms, the number of patients with intraoperative outcomes, postoperative outcomes and postoperative complications were extracted. The quality of the methodology used in randomized controlled trials (RCTs) was determined by the Jadad criteria (15). The quality of each trial was scored and grouped as either high- or low-quality trial. High-quality trials had scores of more than three (score ≥3) while the low-quality trials had scores of less than two (score ≤2). The Newcastle-Ottawa Scale (NOS) criteria (http://www.ohri.ca/programs/clinical_epidemiology/oxford.asp) was used to determine the quality of the methodology used in non-randomized trials. Score ranged from 0 to 9 stars. High-quality trials were those with scores of more than seven stars (score ≥7 stars).

Data of patients with intraoperative outcomes, postoperative outcomes and postoperative complications was extracted from all the included trials. SMD, RR and 95% CI were calculated to determine the association strength of these two regimens with the outcomes. The Q and I2 statistics were used to determine the heterogeneity. I2 of more than fifty percent (I2>50%) indicated a statistically significant heterogeneity. The random-effect model was used in meta-analyses of the conservative statistics. Subgroup analysis was carried out based on the clinical characteristics. A funnel plot was used to determine any bias in the publications. Begg adjusted rank correlation test (16) and Egger regression test (17) were also performed to assess the publication bias. A sensitivity analysis was performed to determine whether the results of the meta-analysis were robust. STATA statistical version 12.0 software was used to perform all the statistical analyses (Stata Corporation, College Station, Texas, USA). A P value of less than 0.05 (P<0.05) was considered statistically significant. All the P vales were two-sided.

Characteristics of studies included in this study

Our initial search yielded 1,646 potentially relevant clinical trials on ERAS or conventional care in patients who underwent RP. After reviewing and screening, 10 primary studies (18-27) met our inclusion criteria. Among the ten, five were RCTs studies, four were retrospective trials and one was a prospective cohort study. The studies had 3,803 subjects that were pooled for meta-analyses (Figure 1). The baseline characteristics of each trial are shown in Table 1 while the Care elements implemented in ERAS protocol for RP in each trial are shown in Table 2. All trials included were open label and had between 50 and 2,610 patients enrolled for the trial. The Jadad quality scores of the included RCTs ranged from 2 to 3 while the NOS quality scores for the prospective cohort study and the retrospective trials ranged from 7 to 8 stars. Base on the eligibility criteria of most of the trials, patients with impaired hepatic, renal or bone marrow function were excluded. A majority of the patients in these trials had an Eastern Cooperative Oncology Group (ECOG) performance-status scores of 0 or 1. This systematic review followed the guidelines of the PRISMA statement. 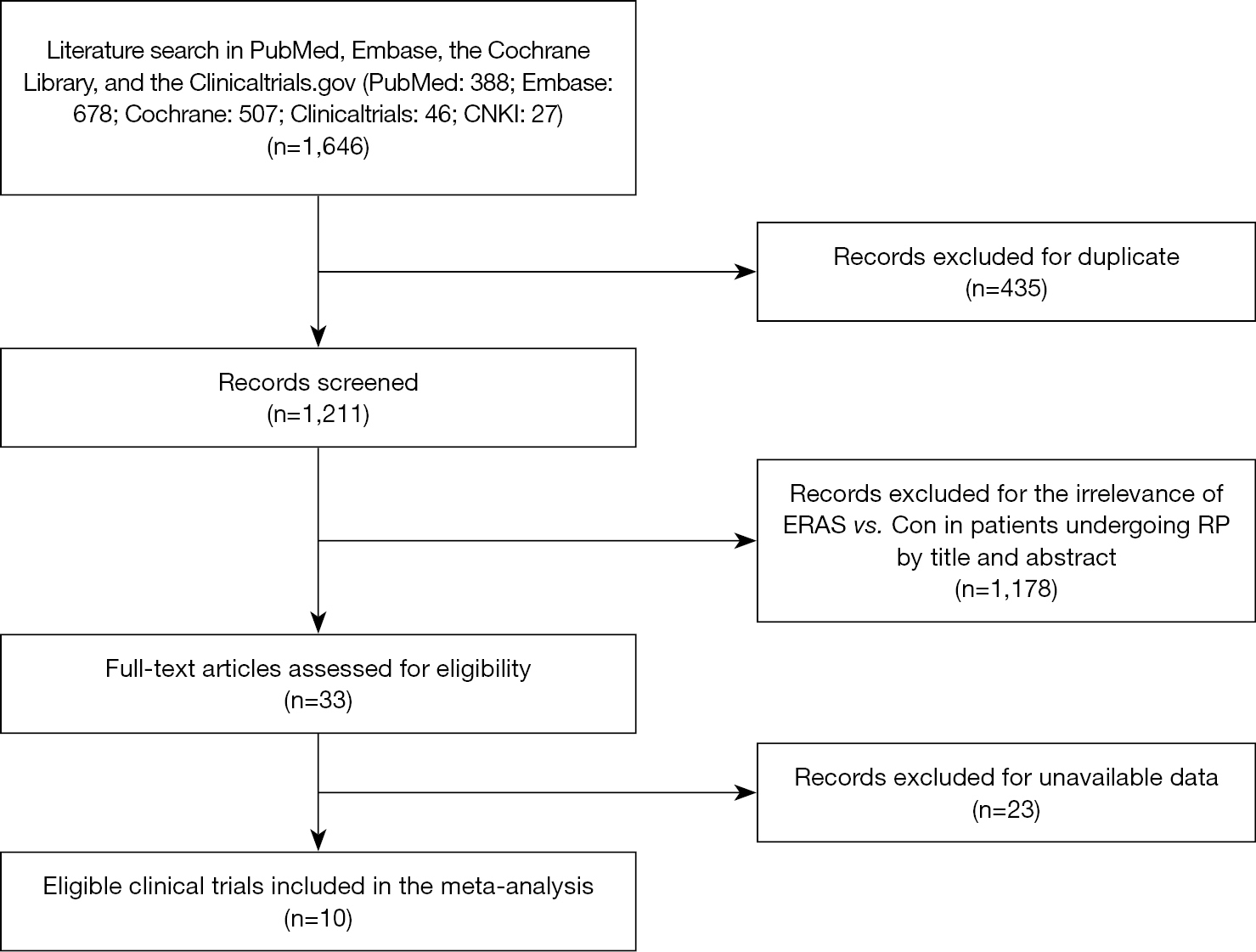 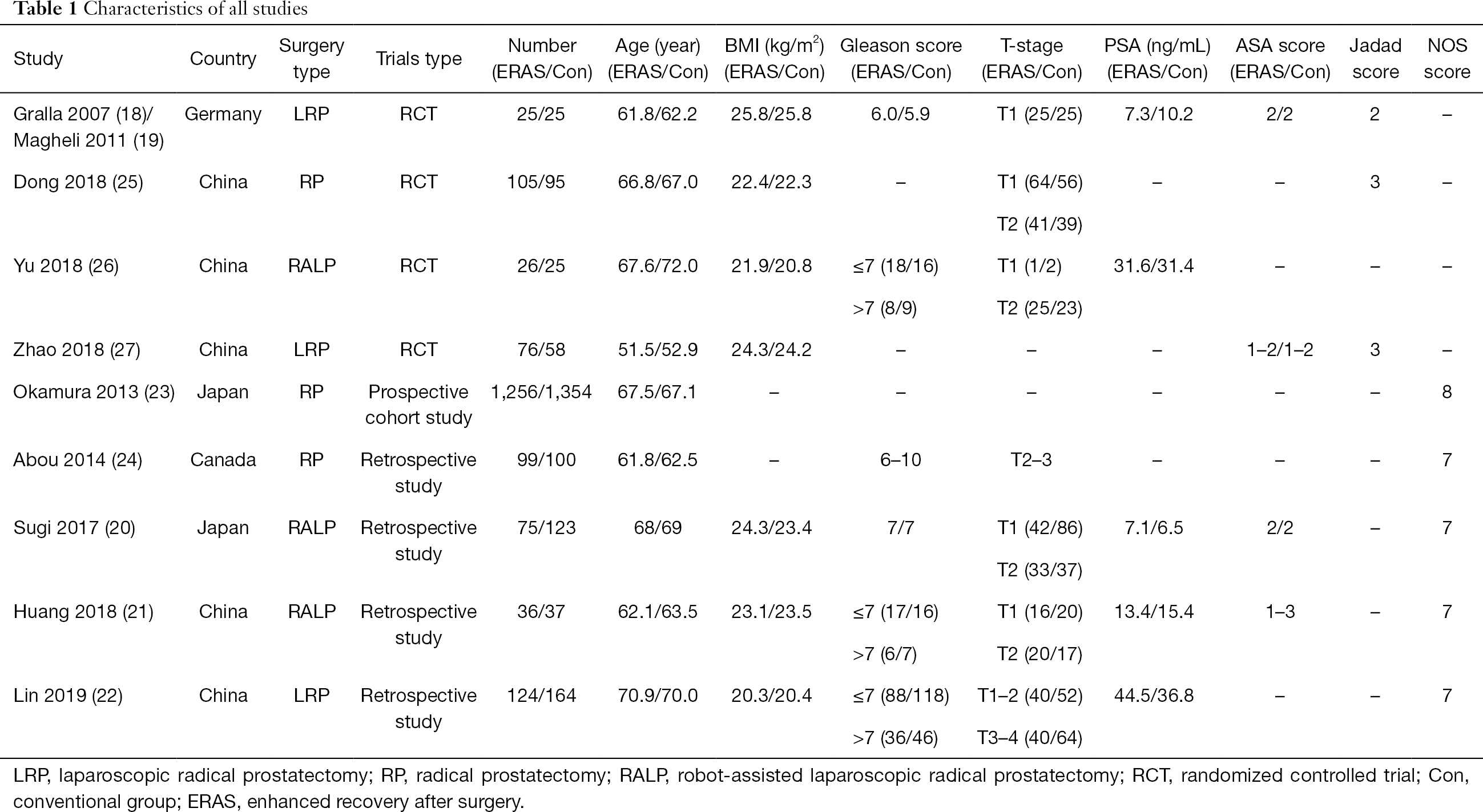 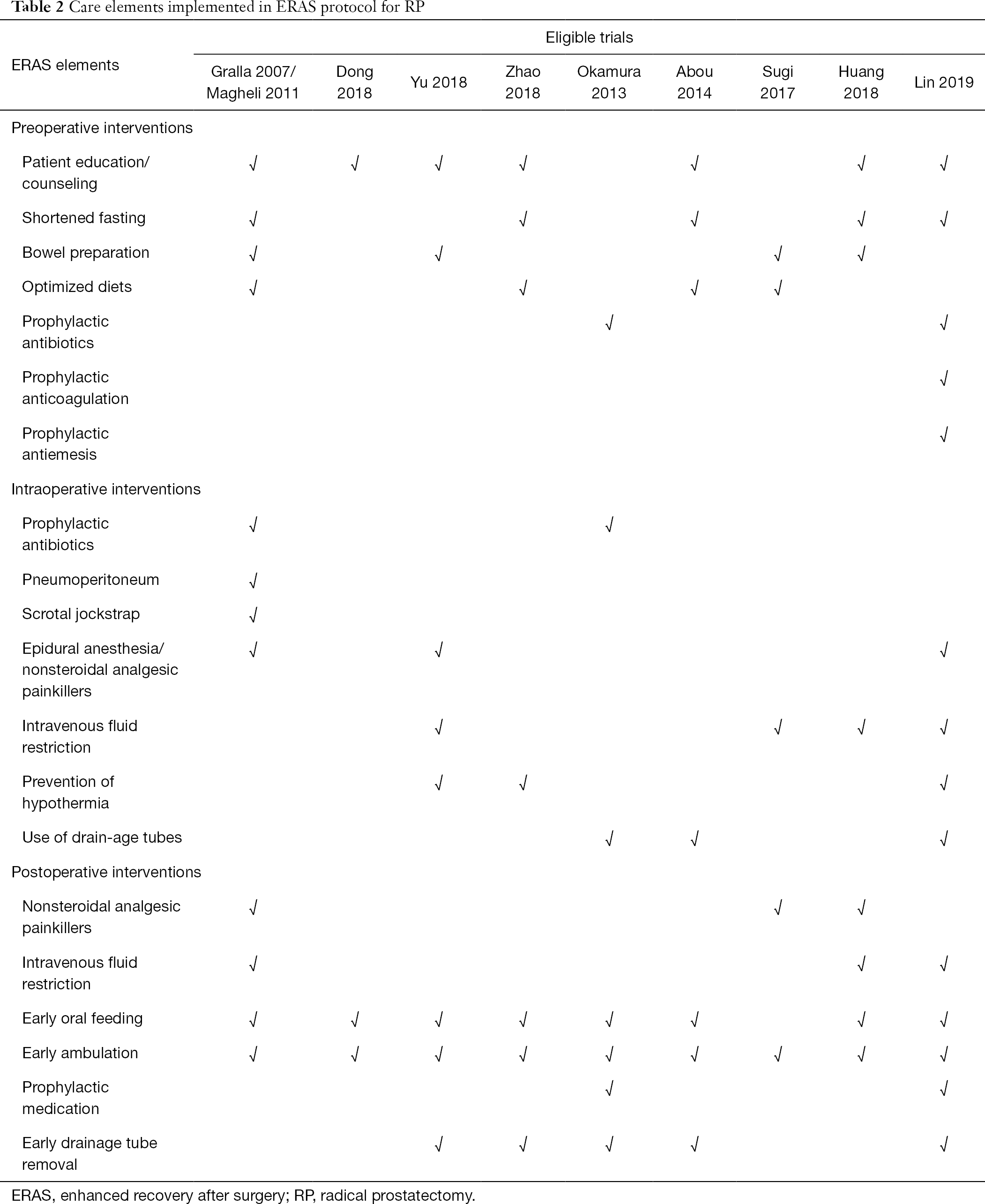 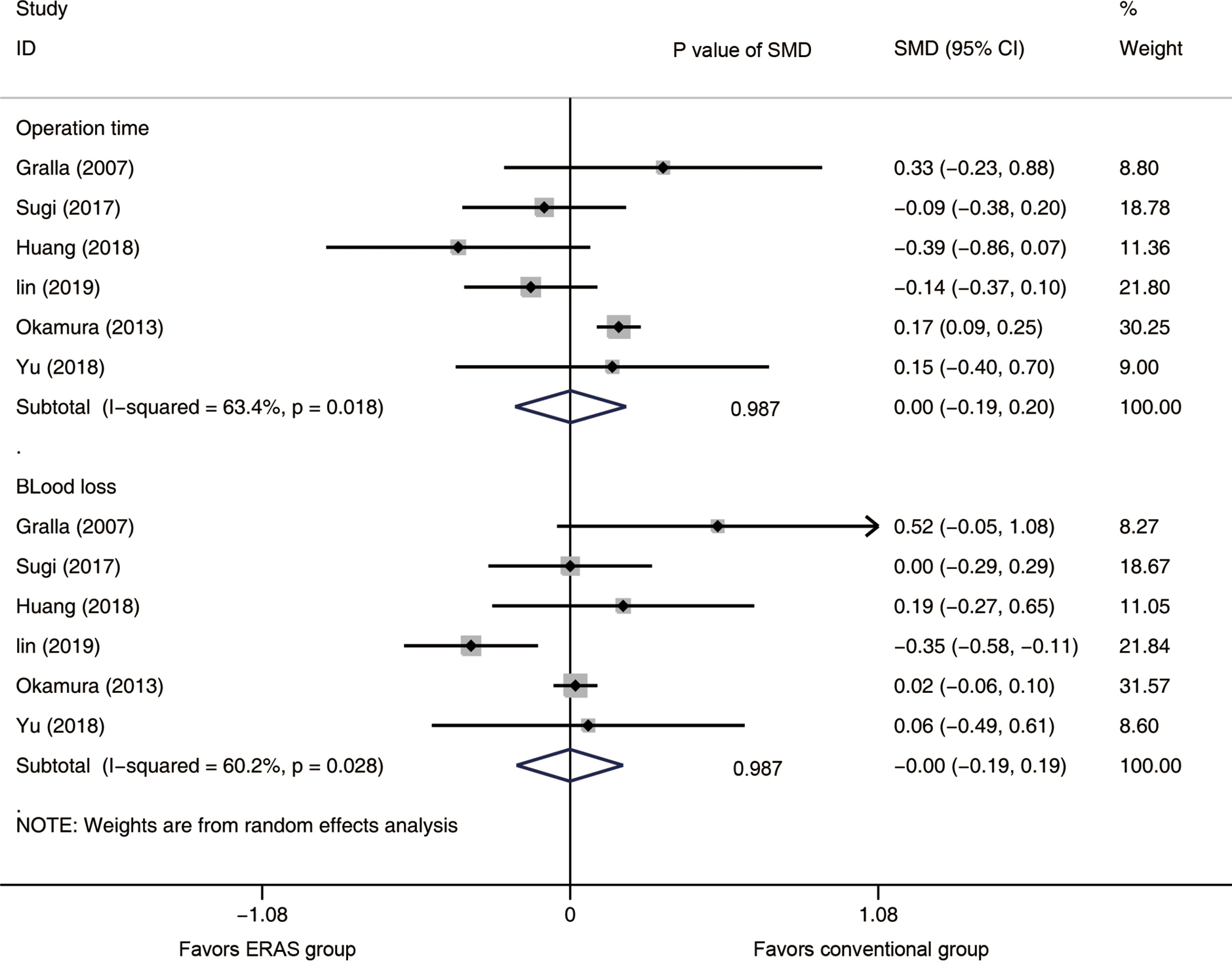 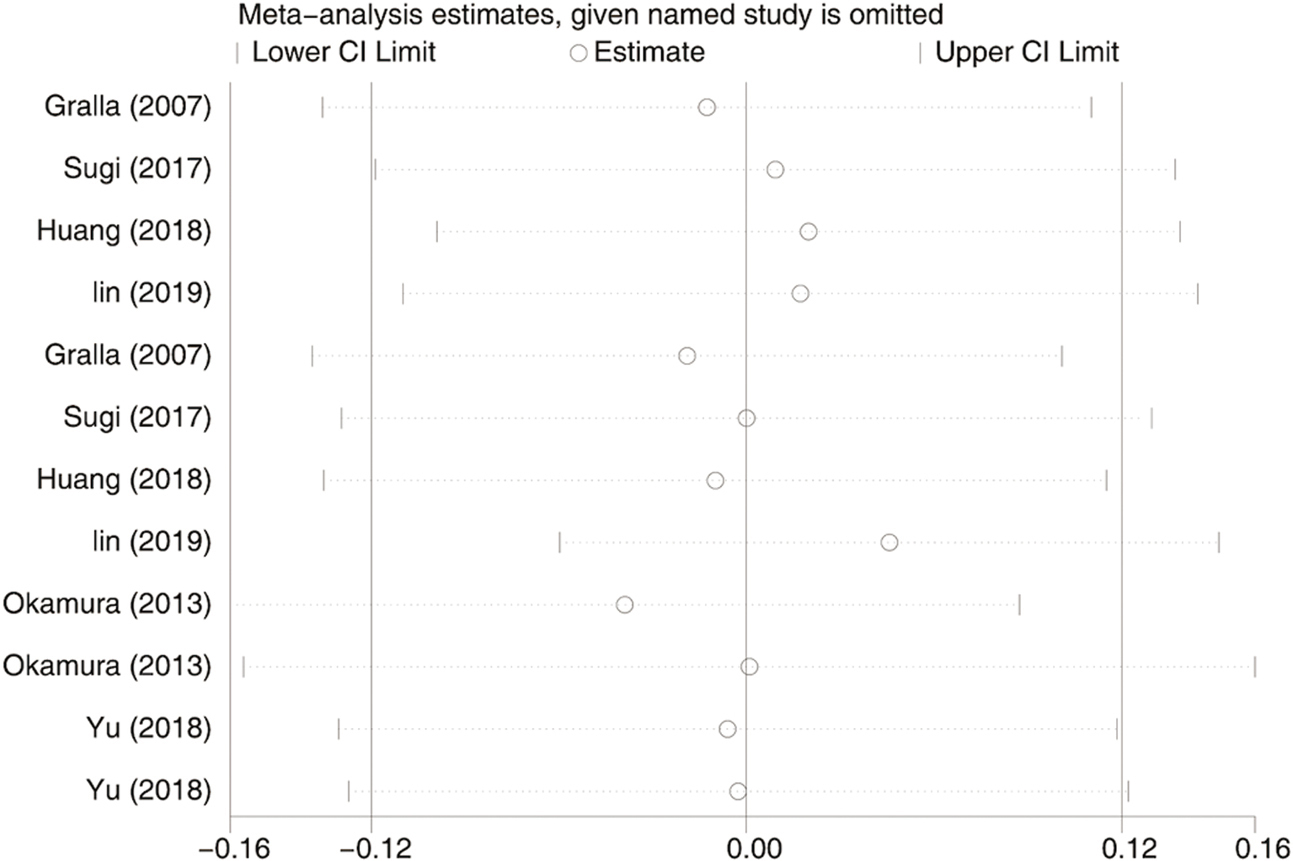 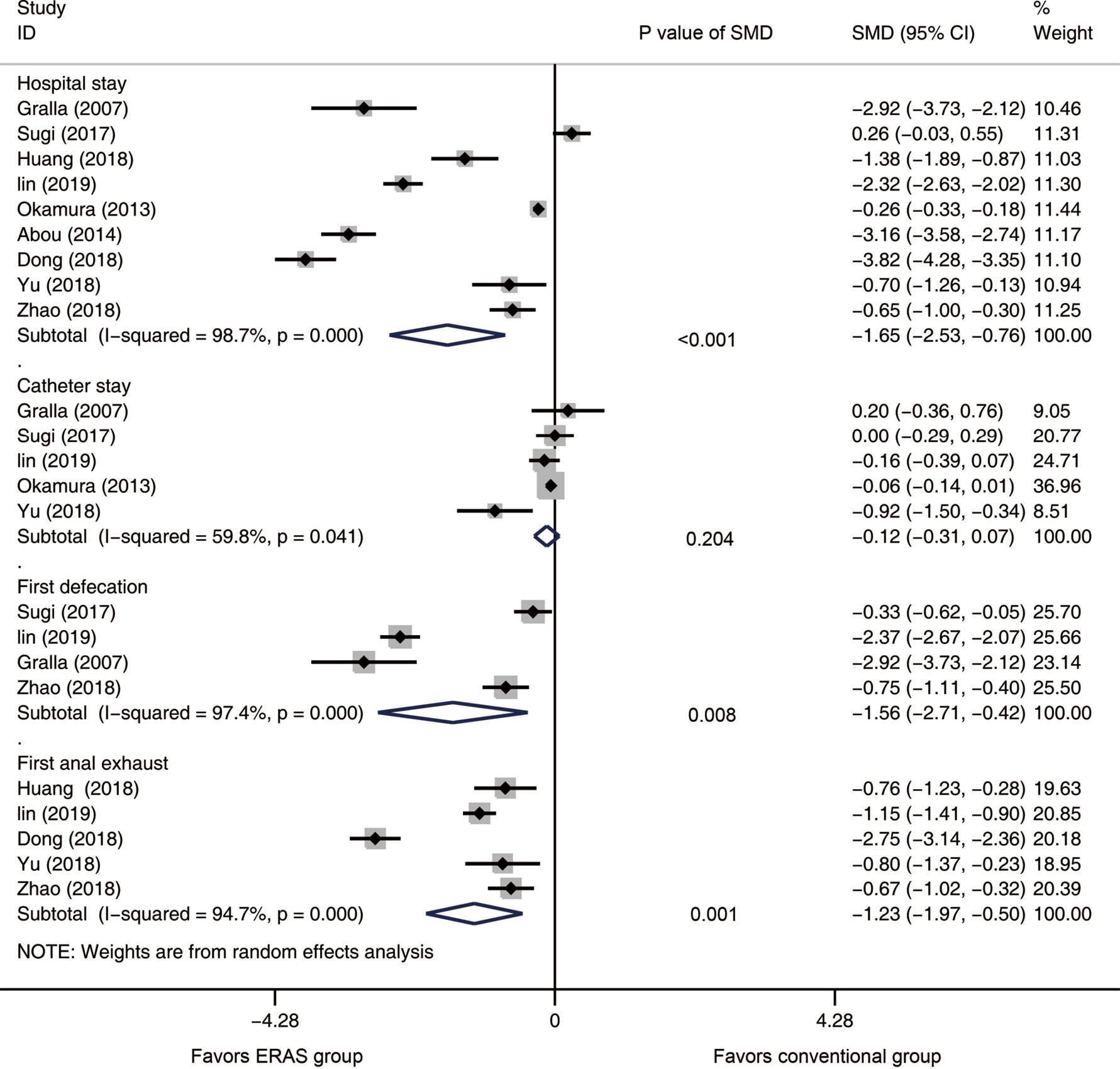 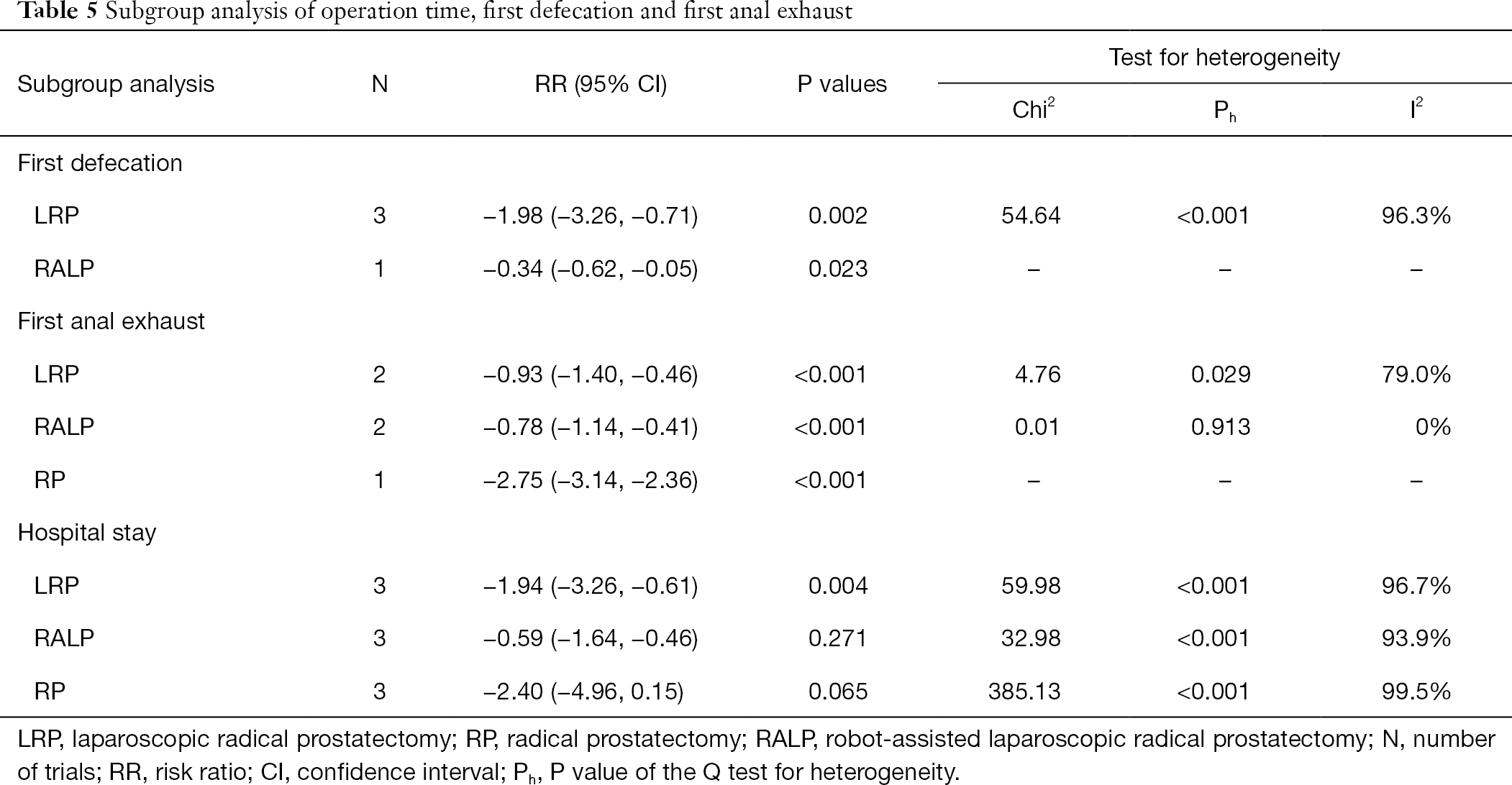 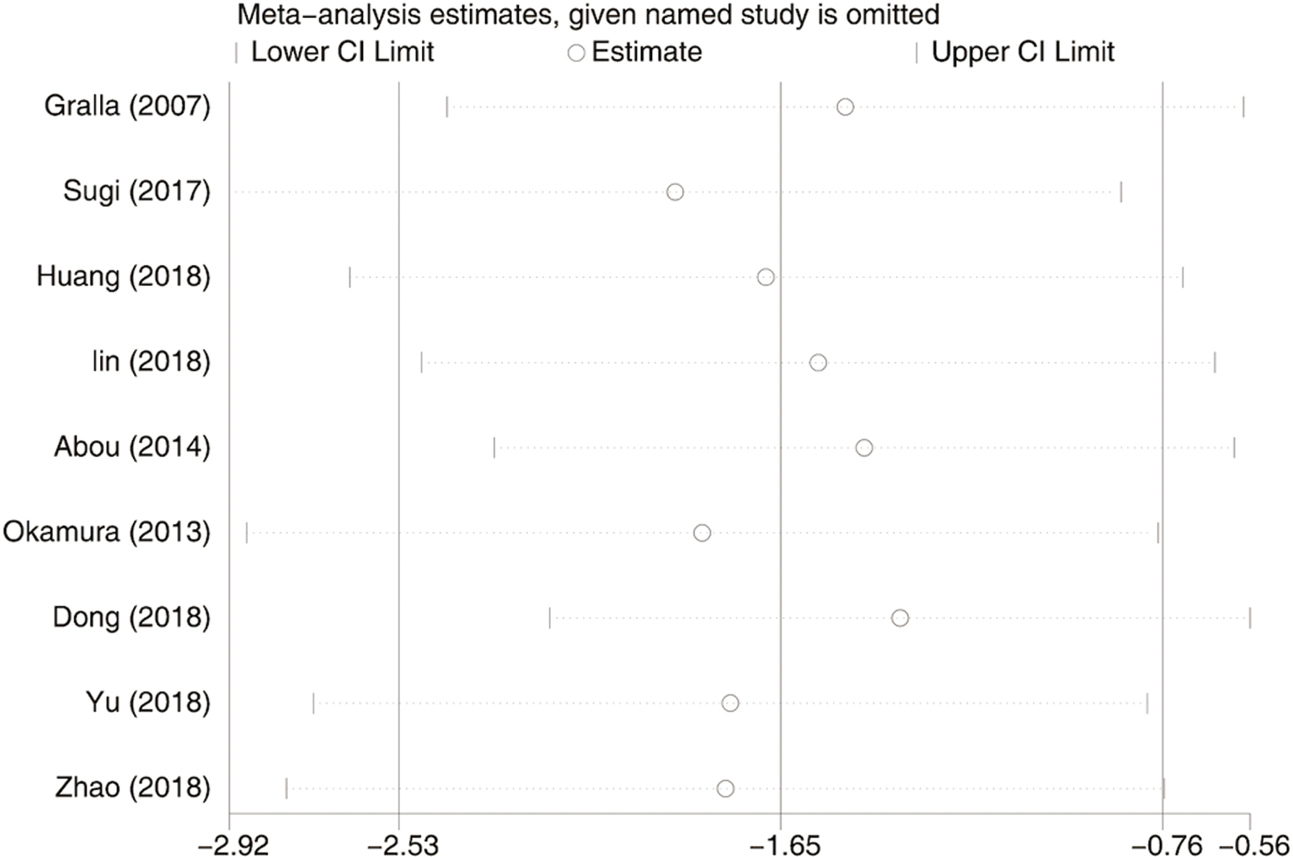 Six hundred and seventy subjects treated with either ERAS or conventional care in four trials were included for the analysis of first defecation (data shown in Tables 3,4). An SMD of −1.56 (95% CI: −2.71, −0.42, I2=97.4%) were obtained (Figure 3). The results showed that ERAS groups had a shorter time to first defecation compared to the conventional care groups (P=0.008). The results indicated statistically significant heterogeneity. Subgroup analysis was performed to find sources of heterogeneity. The four trials were first separated in two groups (LRP and RALP) based on their surgery sub-type. However, the results still showed heterogeneity (Table 5) indicating that the difference in surgery sub-types was not the source of heterogeneity. But sensitivity analysis showed that the results of first defecation were robust (Figure S3). 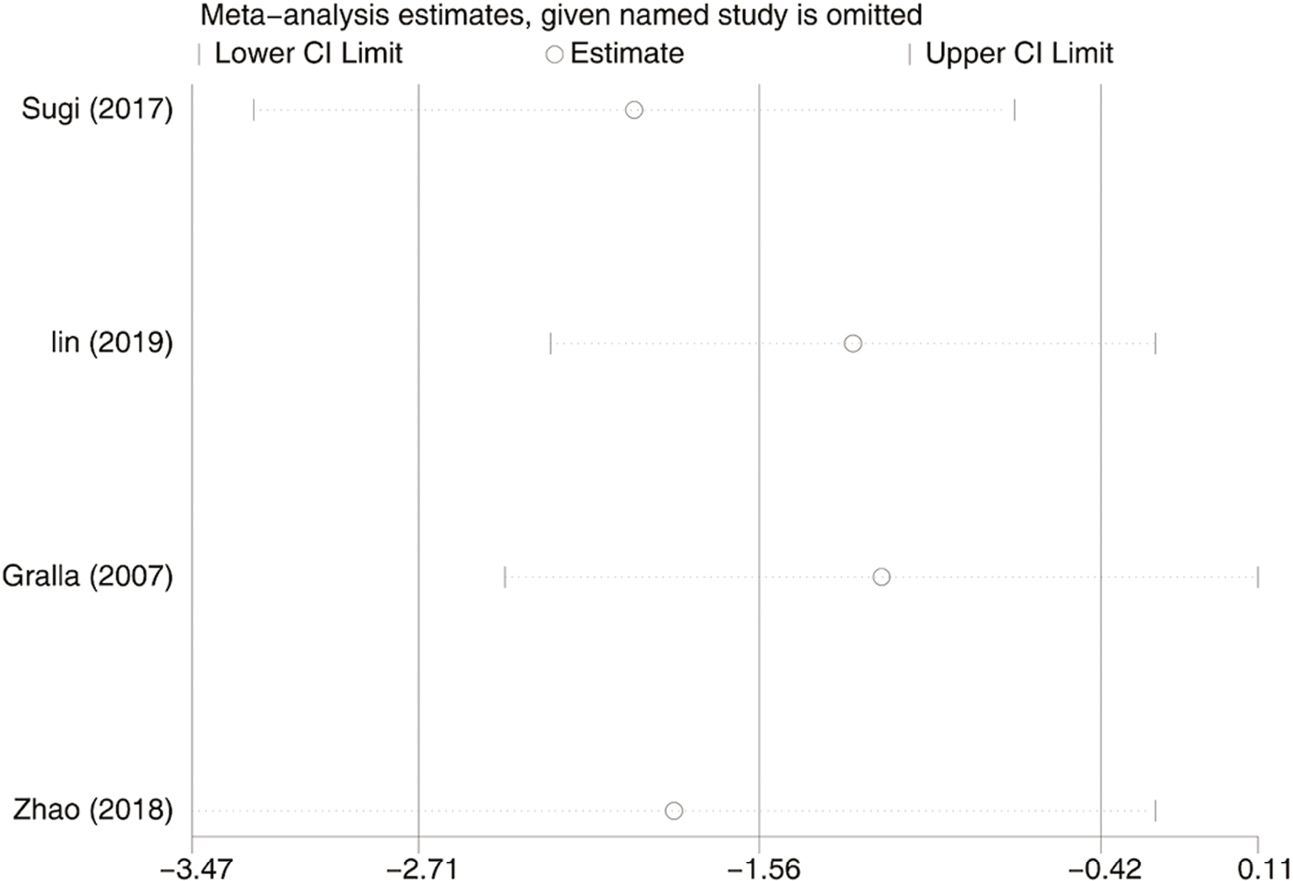 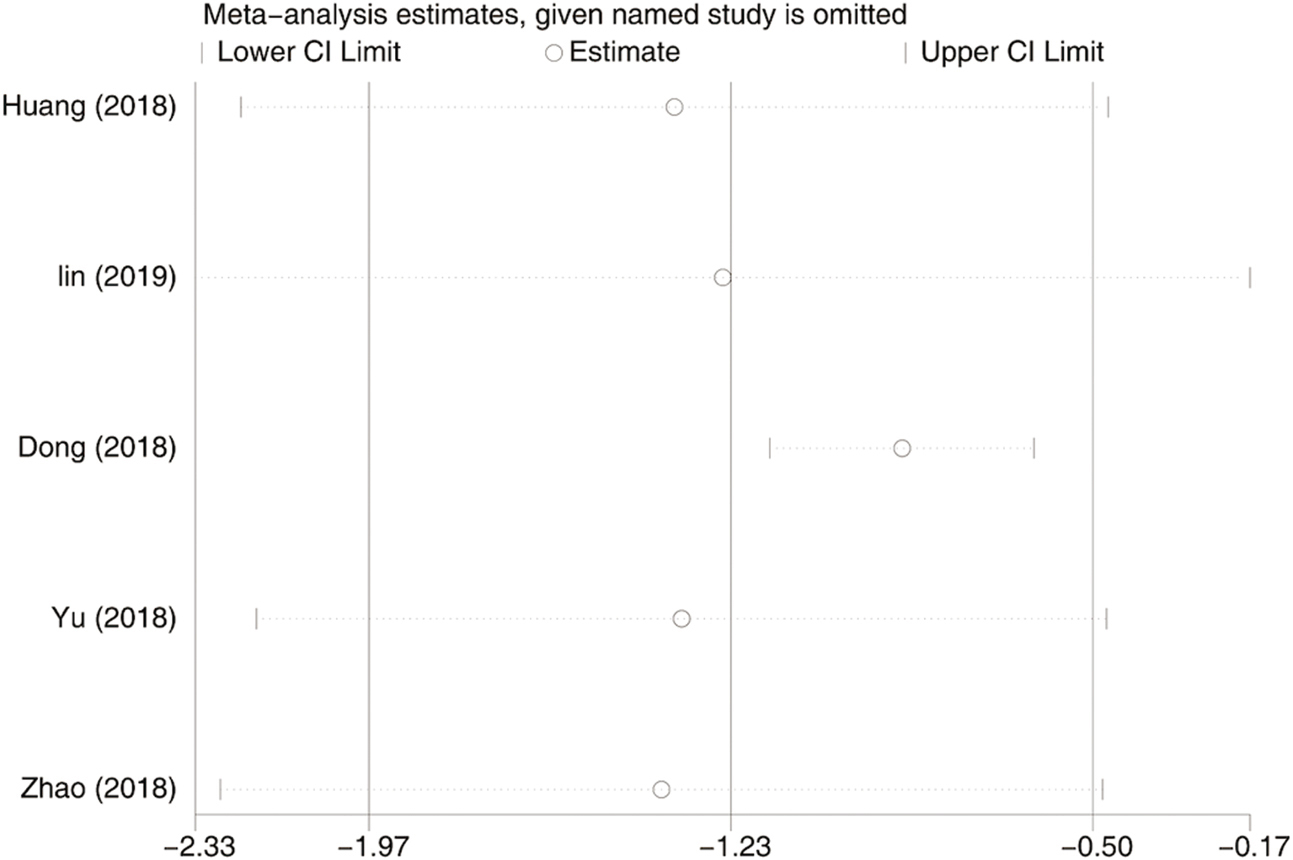 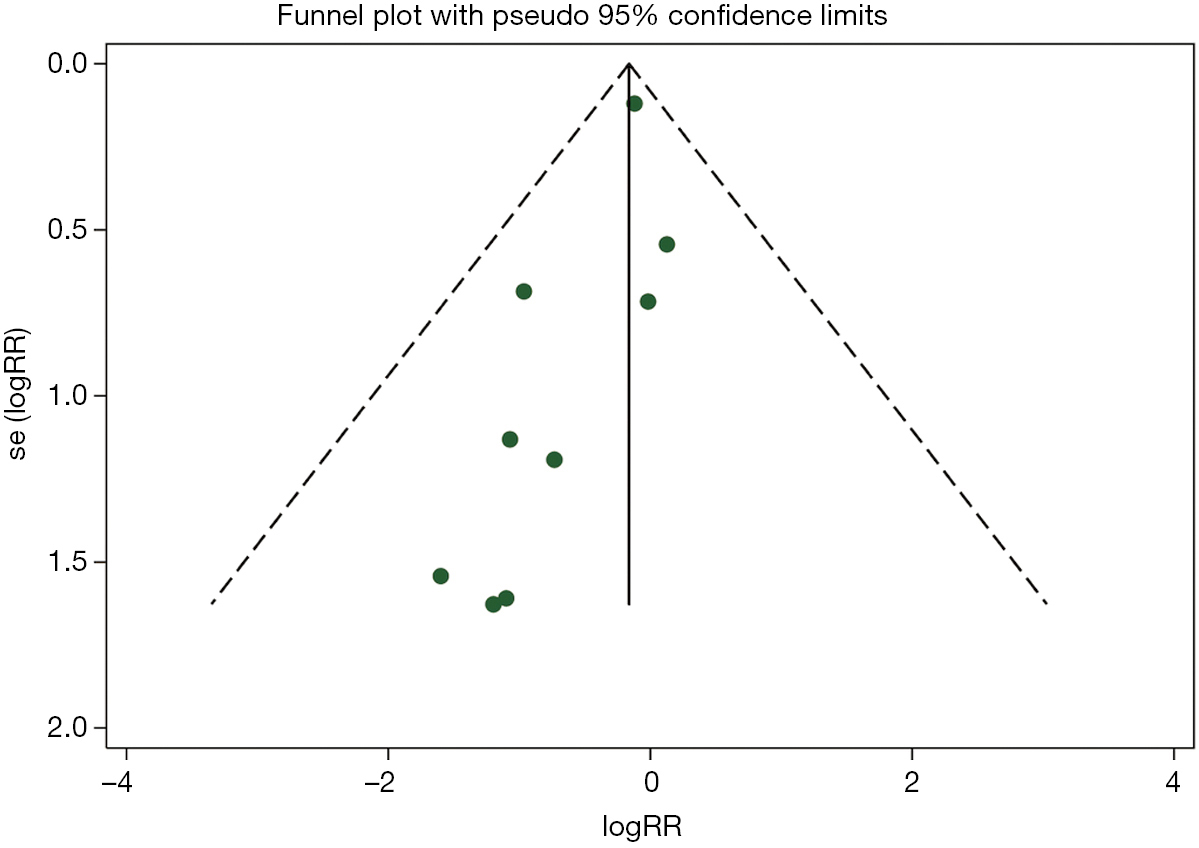 In recent years, minimally invasive RP and open RP have been widely used for the management of Pca patients. Minimally invasive RP is advantageous because it minimizes operative injuries and reduces complications compared to open surgery. However, there seemed to be no significant difference in efficacy between these two sub-types of RP (4,28,29). In some countries, open RP is still an option for Pca patients. Currently, many medical centers have implemented the ERAS into RP programs. The ERAS protocol is a standardized perioperative care pathway aimed at minimizing the stress of surgery, reduce postoperative morbidity, shorten hospital stay and accelerate recovery. ERAS has been widely implemented in abdominal and gynecologic surgery (7,30,31). Nonetheless, results from clinical trials are not compelling enough to support any definitive conclusions about the superiority of ERAS in RP programs. In this study, we performed a systematic review and meta-analysis on the efficacy and safety of ERAS and conventional care for Pca patients undergoing RP from 10 primary studies. Among the ten, five were RCTs, four were retrospective trials and one was a prospective cohort study. Results indicated that the ERAS group had significantly shorter hospital stay, shorter time to first defecation, shorter time to first anal exhaust, and lower incidence of nausea compared to the conventional group. However, there was no statistical difference in intraoperative outcomes, catheter stay and other postoperative complications between ERAS and conventional group.

Overall survival (OS) and recurrence-free survival (RFS) are the key outcomes for evaluating the efficacy of a surgery. However, the trials included in this meta-analysis did not assess the OS nor RFS, because they were all short-term studies. As such, long-term clinical trials are needed to compare the OS and RFS of these two groups. ERAS group had significantly shorter hospital stay compared to the conventional care group (P<0.001). However, the difference in intraoperative outcomes and catheter stay between ERAS and conventional care arms was not significant (P>0.05). Hospital stay is an important outcome for any surgery. Sugi 2017 reported that there was no significant difference in hospital stay between these two groups (P>0.05) (data shown in Tables 3,4) (20). Contrary to these findings, the ERAS group had a significantly shorter hospital stay period compared to the conventional group (P<0.05) in 8 trials used in this study (19,21-27). Similarly, Lin 2018 compared the hospitalization costs between these two groups and found out that the ERAS group could significantly reduce the hospitalization costs compared to the conventional care group (6.1 vs. 7.2 thousand USD, P<0.001) (22).

Heterogeneity is an important aspect in meta-analysis. In this study, statistical analysis revealed that heterogeneity was present in most aspects. Subgroup analysis performed indicated that the difference in surgery sub-types was not the source of heterogeneity. Although the sources of heterogeneity were not found, sensitivity analysis results indicated that the overall significance of the pooled estimates were not affected by any trial included in the study. Similarly, Begg’s and Egger’s tests were used to detect any publication bias that would introduce false positives in meta-analysis (17). No evidence of publication bias was detected. These results indicated that all the conclusions of this study were credible and verifiable.

However, this study is limited by several factors. The number of studies used was low because of lack of enough high-quality RCTs. As such, some complications could not be accurately assessed. Further to this, the trials included in this study were short-term studies, had inconsistent ERAS protocols and were open labelled. All these were factors that could have affected the outcomes of the study. In future studies, more rigorous long-term experiments needed to be designed to enable precise meta-analysis of all aspects between the ERAS and conventional care groups.

We thank our collaborators who helped with this study.

Conflicts of Interest:All authors have completed the ICMJE uniform disclosure form (available at http://dx.doi.org/10.21037/apm.2020.04.03). The authors have no conflicts of interest to declare.

Ethical Statement: The authors are accountable for aspects of the work in ensuring that questions related to the accuracy or integrity of any part of the work are appropriately investigated and resolved.