Coronary atherosclerosis and plaque rupture, which would result in acute arterial thrombotic events, are main pathologic changes in patients with acute myocardial infarction (AMI) (1). Innate immunity, including the complement system, is important in the formation of atherosclerotic plaques (2). Paroxysmal atrial fibrillation (PAF) is a common arrhythmia, which often causes thrombi in left atrium. The treatment of PAF has changed from an antiplatelet therapy into an anticoagulant therapy (3). Though it has been established that atrial fibrillation is associated with the increased inflammatory activity (4), there are few studies on atrial fibrillation and complement system.

The formation of arterial and venous thrombi is associated with the significant decrease or disturbance of immune cell balancing function (5,6). The complement system not only belongs to the innate immune system, but also its components act as cofactors or enhancement factors of antibodies in adaptive immune responses. It has been demonstrated that pathogenesis of AMI was related to inflammations. Previous studies have shown that the complement system play a major role in the generation of AMI related inflammatory responses (7,8). In order to identify the immune functions in AMI and PAF patients, there is a need to test every protein in the complement system, where difficulties exist due to the various kinds of proteins. Thus, this study was designed to test the gene expression related to innate components, receptors and regulatory proteins of the complement system in peripheral blood mononuclear cells from the AMI group, the PAF group and the controls [stable angina pectoris (SAP) patients] with human genomics technology.

Another 20 novel PAF patients (18 males and 2 females, average age: 65.4±12.5 years) were recruited into the PAF group during the same period. The diagnosis of PAF based on the results of electrocardiogram, which should indicate a presence of continuous and irregular atrial fibrillation waves instead of P wares. AMI, SAP and other concomitant diseases were excluded.

Another 20 SAP patients (18 males and 2 females, average age: 63.6±9.9 years) were recruited into the control group during the same period. The criteria of SAP were as follows: angina pectoris of effort, positive treadmill test and 70% stenosis of at least one coronary artery in coronary arteriography. AMI, PAF and other concomitant diseases were excluded. There were no significant differences of age, gender, smoke, body mass index, systolic blood pressure, diastolic blood pressure, low density lipoprotein, high density lipoprotein and triglyceride among three groups (P>0.05) (Table 1). This study has been approved by the Ethics Committee of Tongji Hospital (No. KYSB-2014-054), and informed consent form was also obtained. This study has been performed in accordance with the principles of Declaration of Helsinki.

A total of 5 mL of peripheral blood samples anti-coagulated with EDTA were drawn from AMI and SA patients, immediately after being admitted to the hospital. And also 5 mL peripheral blood samples were drawn from the controls. Leucocytes were obtained through density gradient centrifugation with Ficoll solution and the remaining red blood cells were destroyed by erythrocyte lysis buffer (Qiagen, Hilden, Germany). Total mononuclear cell RNA was extracted with TRIzol (Invitrogen, Carlsbad, USA) and purified with QiagenRNeasy column (Qiagen), according to the manufacturer’s instructions. The isolated total RNA was tested and quantified using a Nanodrop ND-1000 spectrophotometer (Nanodrop Technology, Cambridge, UK).

Agilent G4112A Whole Human Genome Oligo Microarrays were purchased from Agilent (USA). There are 314 negative control spots, 1,924 positive control spots and 359 blank spots. The functions of more than 70% of the genes in the microarray are already known. All objects were subjected to clip analysis.

The RNA samples of three groups were labeled using the indirect labeling method. Briefly, 1 µg of total RNA was reverse transcribed. Second strand cDNA was then produced and purified followed by in vitro transcription with T7 RNA Polymerase. During in vitro transcription, the modified nucleotide, 5-(3-aminoallyl)-UTP (aaUTP) was incorporated into the cDNA. Subsequently, the fluorescent Cy3 was chemically coupled with the aaUTP which contains a reactive primary amino group on the C5 position of uracil. The dye incorporation rate was assessed with a Nanodrop ND-1000 spectrophotometer and was found to be between 1.2 1.4 pmol/µL. Hybridization was carried out using the Agilent Oligonucleotide Microarray in situ Hybridization Plus kit (p/n 5,184-3,568), according to the manufacturer’s instructions. Briefly, 750 ng of Cy3-labeled sample cDNA was subjected to fragmentation (30 min at 60 °C) and then hybridization on 44K Human Whole-Genome 60-mer oligo-chips (G4112F, Agilent Technologies) in a rotary oven (10 rpm, 60 °C, 17 h). Slides were disassembled and washed in solutions I and II, according to the manufacturer’s instructions.

Measurement data were expressed by average ± standard deviation. The Agilent Feature Extraction software was used to collect the original data from the microarray, followed by an analysis with a robust multichip average. The gene intensity data between the PE and control group were compared with a random variance model-corrected t-test by SPSS 14.0 software packet. Differentially expressed genes were identified from whole genomes. P<0.05 was considered statistically significant.

mRNA expression of genes related to complement recognition and activation 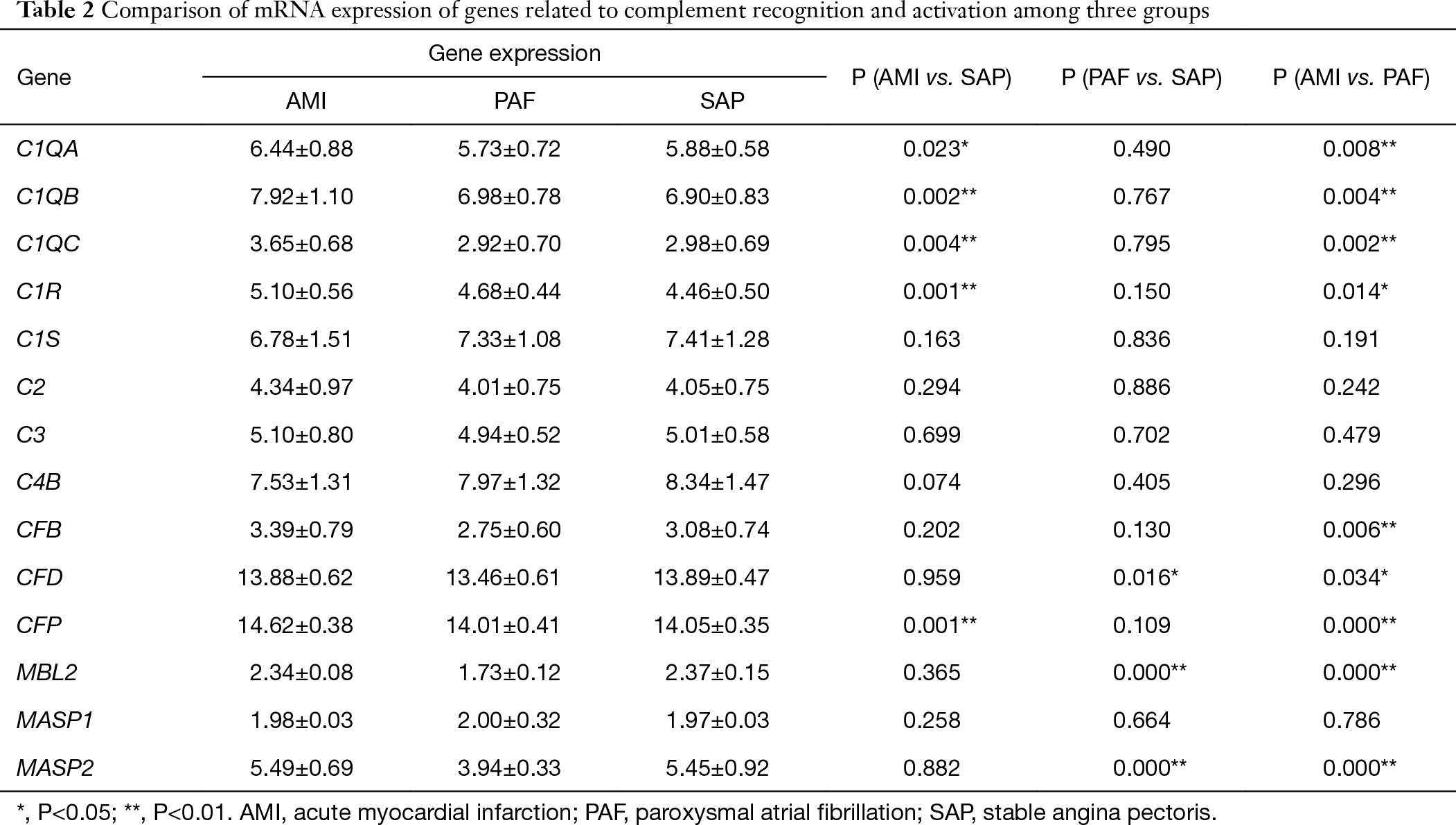 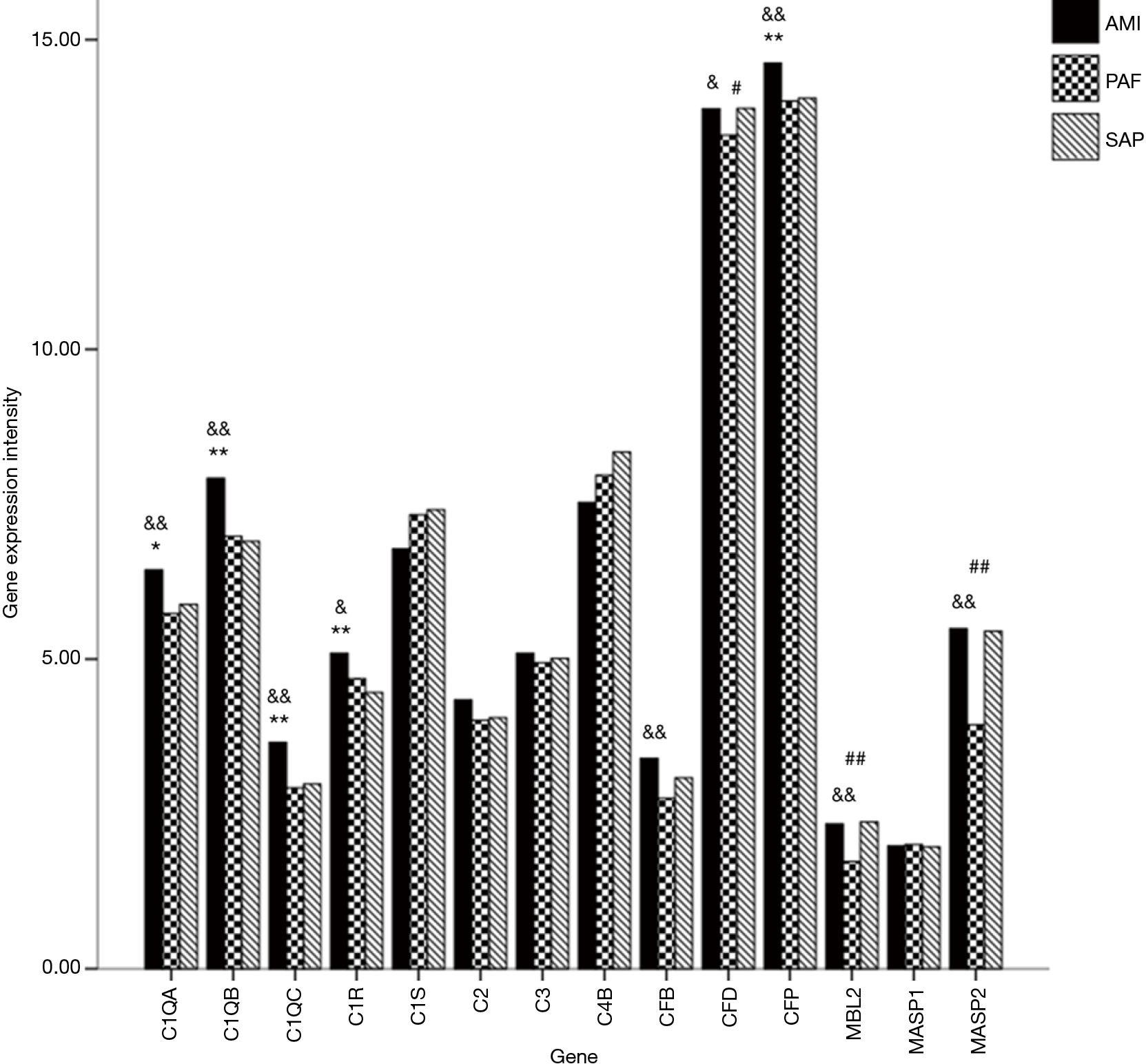 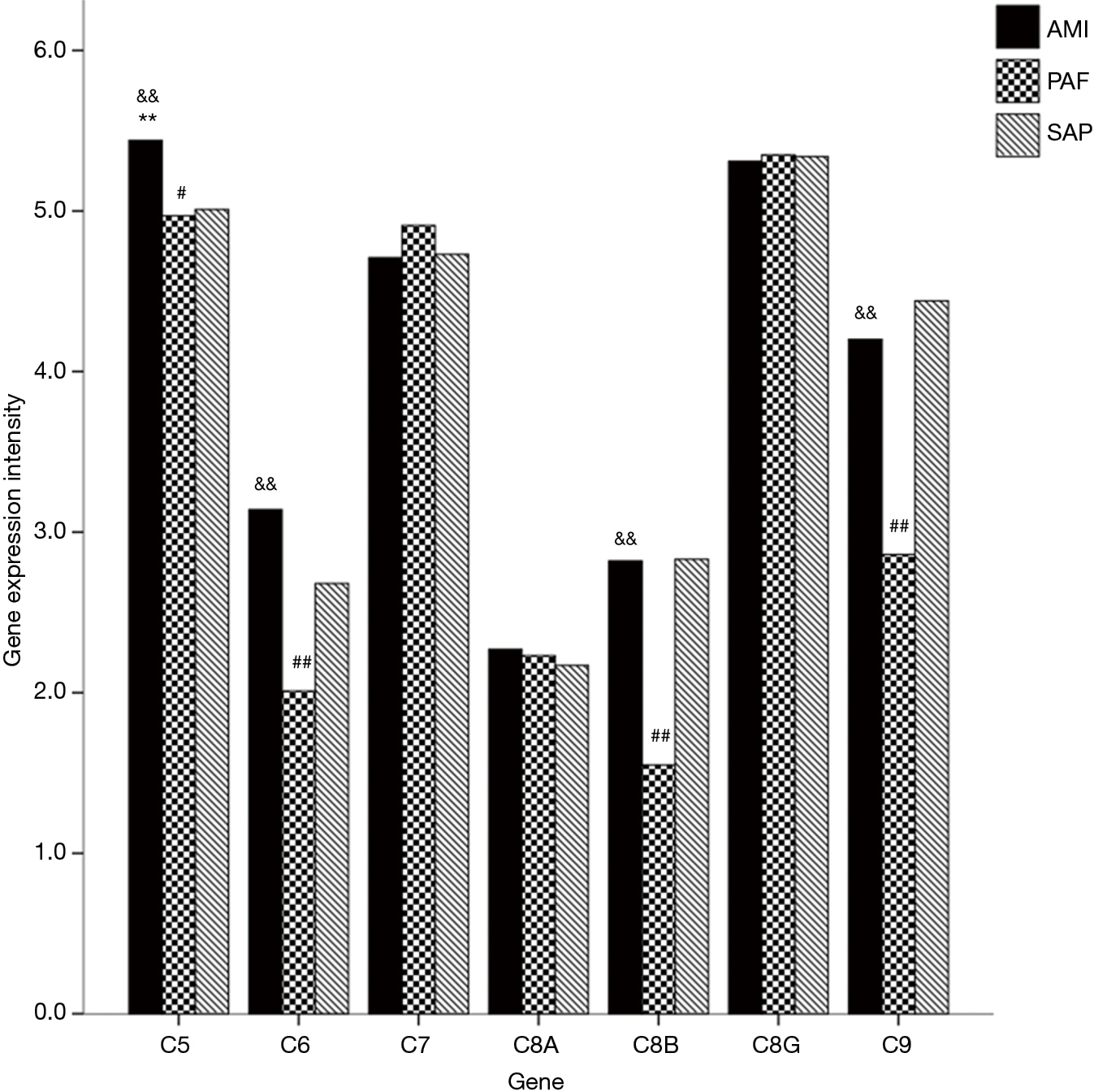 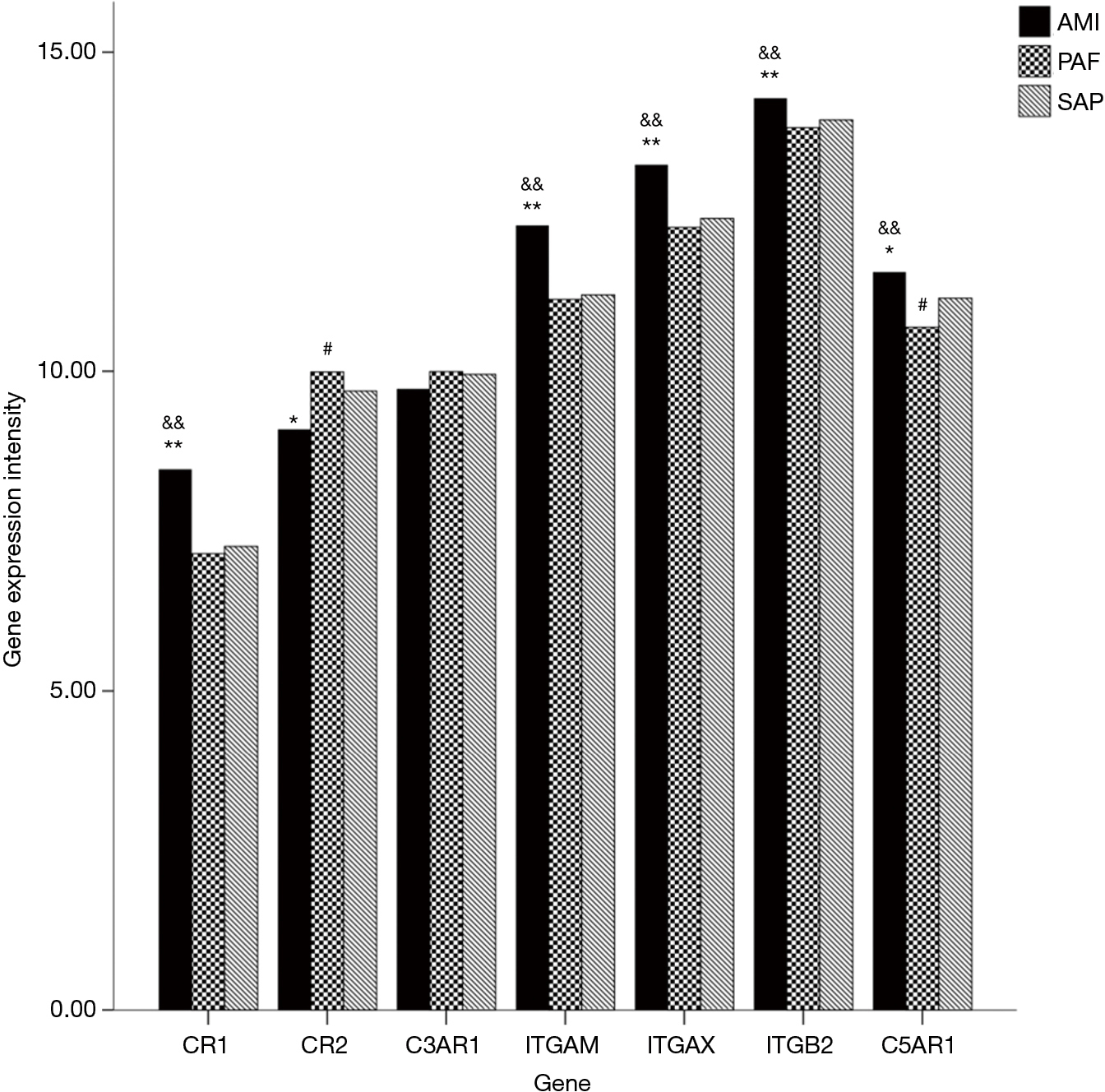 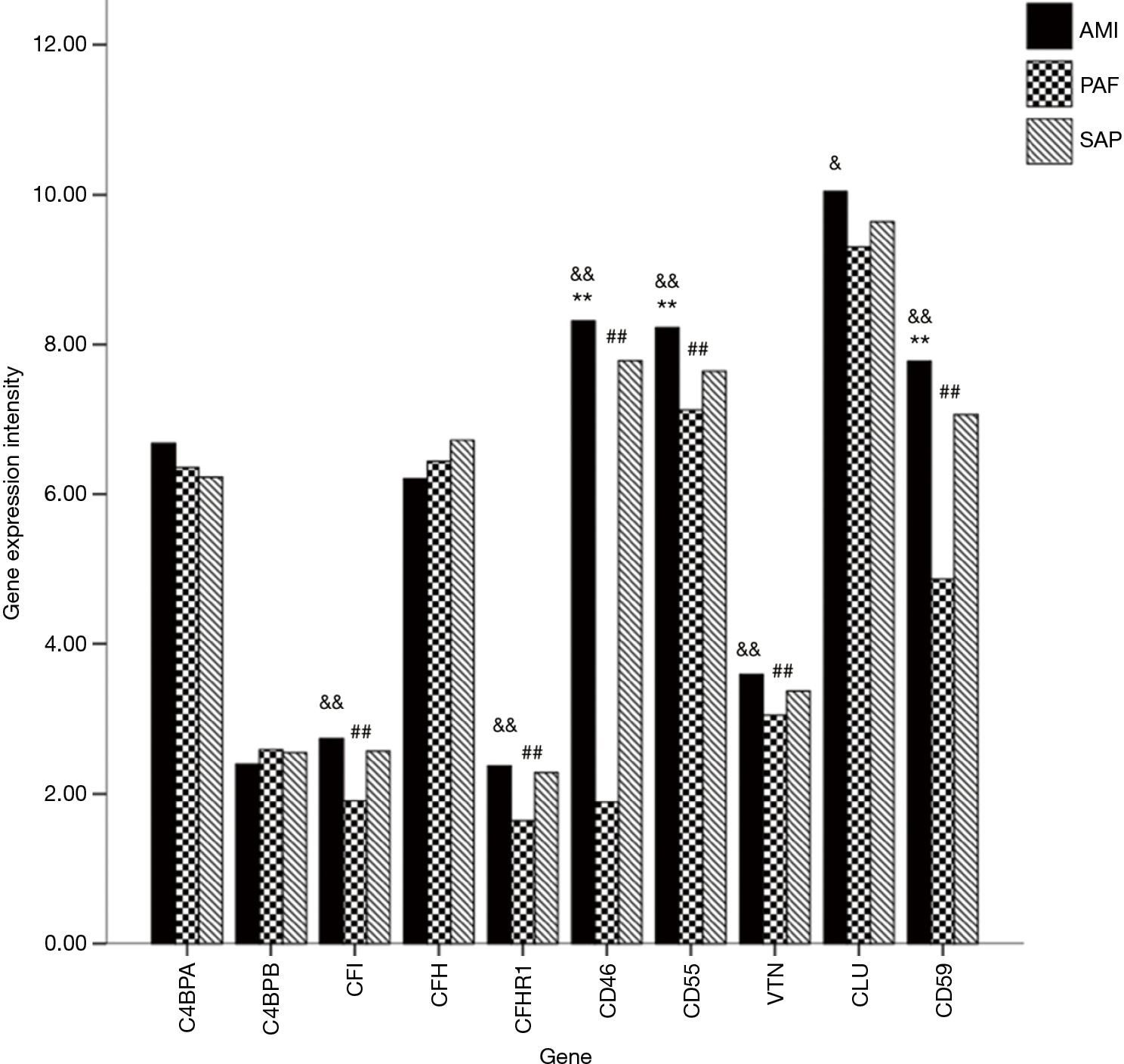 The complement is not a single molecule, but a group of more than 30 kinds of soluble and membrane-bound proteins with enzymatic properties existing in serum, tissue fluid, and cell membrane, which could be activated by a series of cascade reactions. Taken together, they are called the complement system. Its main functions consist of mediation of inflammations, opsonized phagocytosis, and lysis of cell membranes. In this study, a total mRNA expression of 38 genes was detected and analyzed in four aspects of the complement system, which are early components, late components, complement receptors, and complement regulatory factors.

Through three pathways, including classical pathway, alternative pathway and lectin pathway, can the complement cascade be activated. As the initial part of classical pathway, C1 is a compound of C1q, C1r and C1s. C1q serves as a subunit with a recognition function, while C1r and C1s act as catalytic subunits. C1q is a protein formed by A, B and C peptide chains, which are encoded by C1QA, C1QB and C1QC genes respectively. And all these chains spin and fold to generate different active sites, which can bind with C1R gene encoded C1r and C1S gene encoded C1s. C1q can be activated by combining with an IgM or two close IgG, meanwhile the inhibitory function of C1INH on C1q will be removed. Besides, it was found that C1q could stimulate B lymphocytes to produce more immunoglobulins to combine with, which could increase the possibility of combination with IgM and IgG. In this study, mRNA expression of genes related to C1, representing the activation of classical pathway, was significantly upregulated in AMI patients when compared with the controls, indicating that the classical pathway was activated in AMI patients. Other researchers also confirmed the classic pathway activation in acute coronary syndrome (9,10). However, there was no significant difference between PAF patients and the controls, suggesting that the classical pathway was not activated in PAF patients. As for the comparison between PAF and AMI patients, it was without doubt that mRNA expression of C1QA, C1QB, C1QC and C1R genes in AMI patients was significantly upregulated, indicating the activation of the classical pathway was significantly stronger in AMI patients than in PAF patients.

Conflicts of Interest: All authors have completed the ICMJE uniform disclosure form (available at http://dx.doi.org/10.21037/apm.2020.04.18). The authors have no conflicts of interest to declare.

Ethical Statement: The authors are accountable for all aspects of the work in ensuring that questions related to the accuracy or integrity of any part of the work are appropriately investigated and resolved. This study has been approved by the Ethics Committee of Tongji Hospital (No. KYSB-2014-054), and informed consent form was also obtained. This study has been performed in accordance with the principles of Declaration of Helsinki.