Since the first successful planned liver resection done by Langenbuch in 1888, hepatectomy has been improved for over 130 years: Wendel did the first hemihepatectomy; Lortat-Jacob and Robert performed the first inflow ligation resection (1) and till today we have much more operation types to choose such as local resection, hepatic segmentectomy and multiple segmentectomy. Hepatectomy remains the only potential curative treatment for liver lesions primary or metastatic liver disease, benign liver lesions and other liver diseases. In order to reduce blood loss during liver operation, various methods of vascular occlusion have been used (2). Although it seemed that the incidence of liver failure did not increase, many studies revealed that the liver enzymes were significantly elevated after vascular occlusion (3), and the potential mechanism might be ischemia-reperfusion (IR) injury.

IR injury of the liver is a complex multi-path process leading to the activation of inflammatory pathways. Cellular injury occurs during both the ischemic and reperfusion phases (4), especially in reperfusion phase. Reperfusion injury, which follows the ischemic injury, results not only from metabolic disturbances but also from a profound inflammatory immune response that involves both direct and indirect cytotoxic mechanisms (5). Indeed, inflammatory plays a so critical role in IR injury that various pharmacological agents have been attempted to decrease inflammation during hepatectomy.

Ulinastatin or urinary trypsin inhibitor (UTI) is a Kunitz-type serine protease inhibitor that plays an anti-inflammatory effect by inhibiting several proteases such as trypsin, plasmin, cathepsin G, chymotrypsin, and neutrophil elastase (6). Animal studies (7-10) and human studies (11,12) showed that UTI administration suppressed acute inflammatory responses after hepatectomy. Since there was no systematic review or meta-analysis of randomized controlled trials (RCTs) to assess the benefits of UTI in hepatectomy, whether perioperatively UTI using has a protective effect on liver function remained unclear. Here we performed a systematic review and meta-analysis to evaluate the efficiency of UTI in liver protection in patients with hepatectomy.

This meta-analysis was performed according to the guidelines for ‘preferred reporting items for systematic reviews and meta-analyses’ (the ‘PRISMA’ statement) (13), and the methodology set forth in the Cochrane Handbook for Systematic Reviews of Interventions (14).

Electronic databases, including PubMed, Cochrane, Embase, CNKI and CBMdisc were searched by two independent researchers between Jan 2001 to May 2019. The following keywords were used: liver function, liver enzyme, hepatectomy, liver resection, ulinastatin, IR injury and UTI. Two independent reviewers searched the databases using these keywords to identify potentially relevant articles. Reference lists of the relevant articles were also reviewed for any additional relevant studies. The search was not restricted by language.

Studies were identified according to the following inclusion criteria: (I) participants: human with relevant diseases requiring hepatectomy, (II) comparison: patients with UTI treatment versus those without UTI, (III) outcome: trials that reported liver function, and (IV) methodological criterion: a prospective RCT.

Two authors extracted relevant data independently, including the first author’s name, publication year, the size of the UTI and control groups, average age of participants, gender ratio, duration of surgery, surgery types and UTI protocol, alanine transaminase (ALT), aspartate transaminase (AST), and total bilirubin (TBIL) before and after treatment. Intention-to-treat (ITT) data gathered from the studies were used as long as it was available. Otherwise, available data were used.

The outcome measures were changed in ALT, AST and TBIL after treatment. For all included studies, post-treatment measurements were summarized as mean ± standard deviation (SD).

Statistical analyses were performed using Review Manager 5.0 (RevMan 5) computer program (developed by the Cochrane Collaboration). Heterogeneity was assessed by calculating the Cochran Q and the I2 statistic. A Cochran Q with P<0.121 or an I2 statistic >50% (16) indicated heterogeneity between studies. Depending on the level of heterogeneity, study-specific RRs were pooled using a fixed-effect model or a random-effects model. If high heterogeneity existed, a random-effect model was used (17); otherwise, a fixed-effect model was used. Sensitivity analysis was conducted based on the leave-one-out approach for ALT, AST and TBIL. Assessment of publication bias was estimated using funnel plots. For all statistical analyses, with the exception of heterogeneity, a value of P<0.05 was considered to indicate statistical significance, and all tests were two-sided. 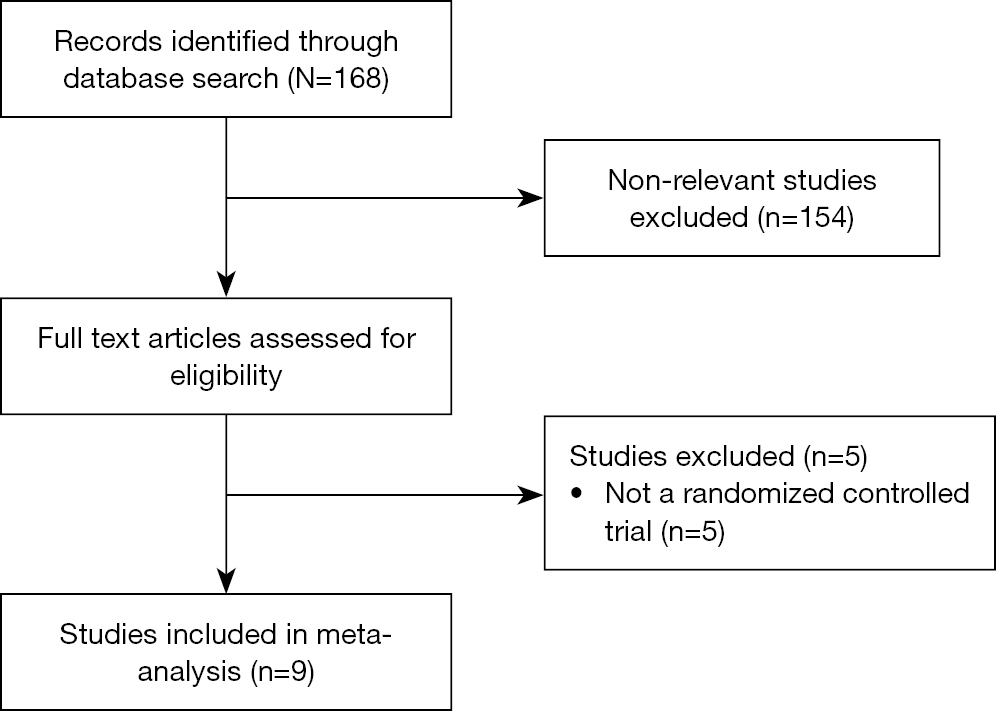 The basic characteristics of the studies are presented in Table 1. The total number of participants in the treatment groups was 408 (range, 14–80), and in the control groups was 372 (range, 14–78). In those studies, most participants were males (69.7%±10.1%) and the mean age was about 47.9±8.1 years old. The mean follow-up time ranged from 1 to 7 days. In the included studies, 80% to 100% of the patients had primary carcinoma of the liver, liver metastases and benign liver lesions, and the rest of patients with hepatectomy were diagnosed as hepatolithiasis. The demographic baselines of the two groups in each included RCT were comparable. 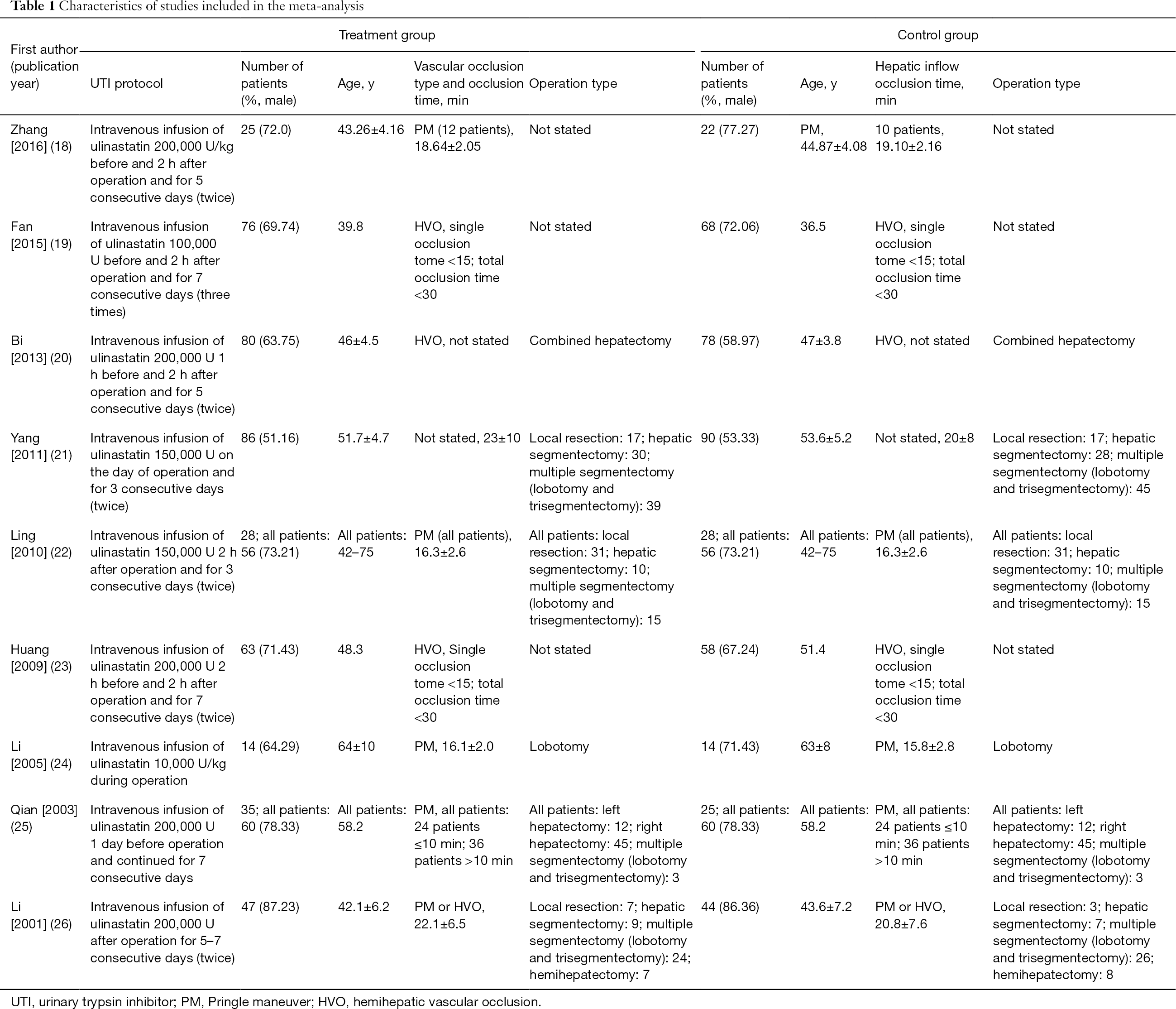 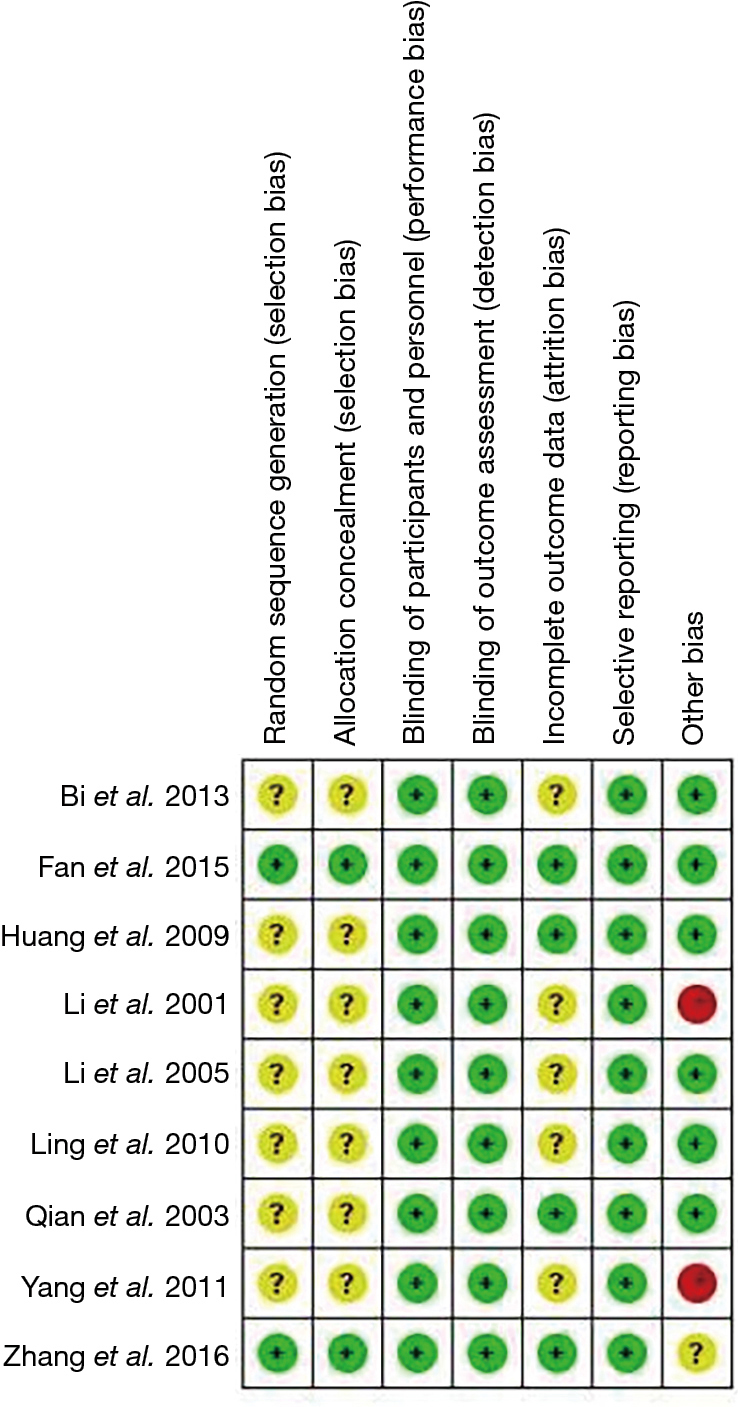 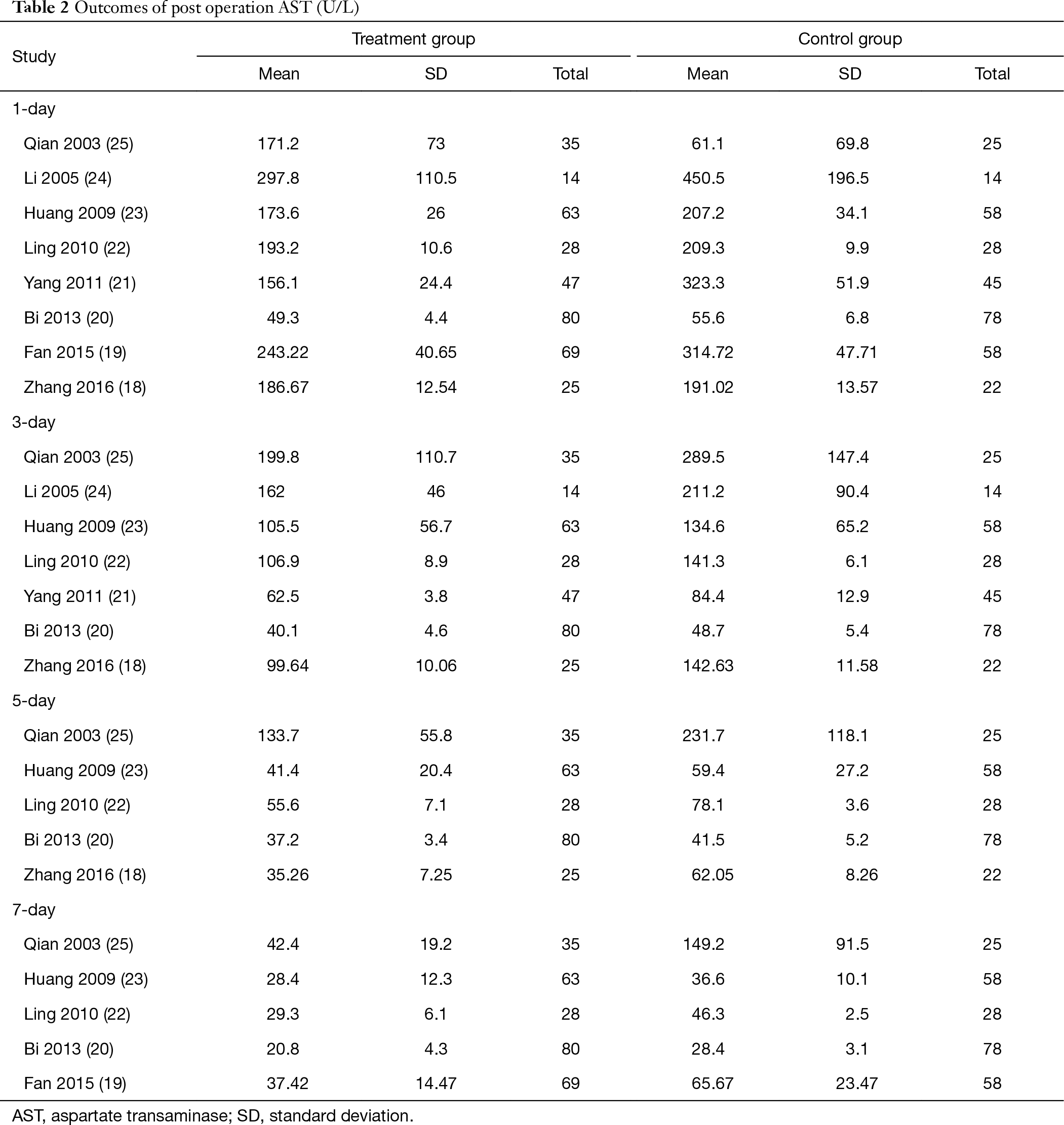 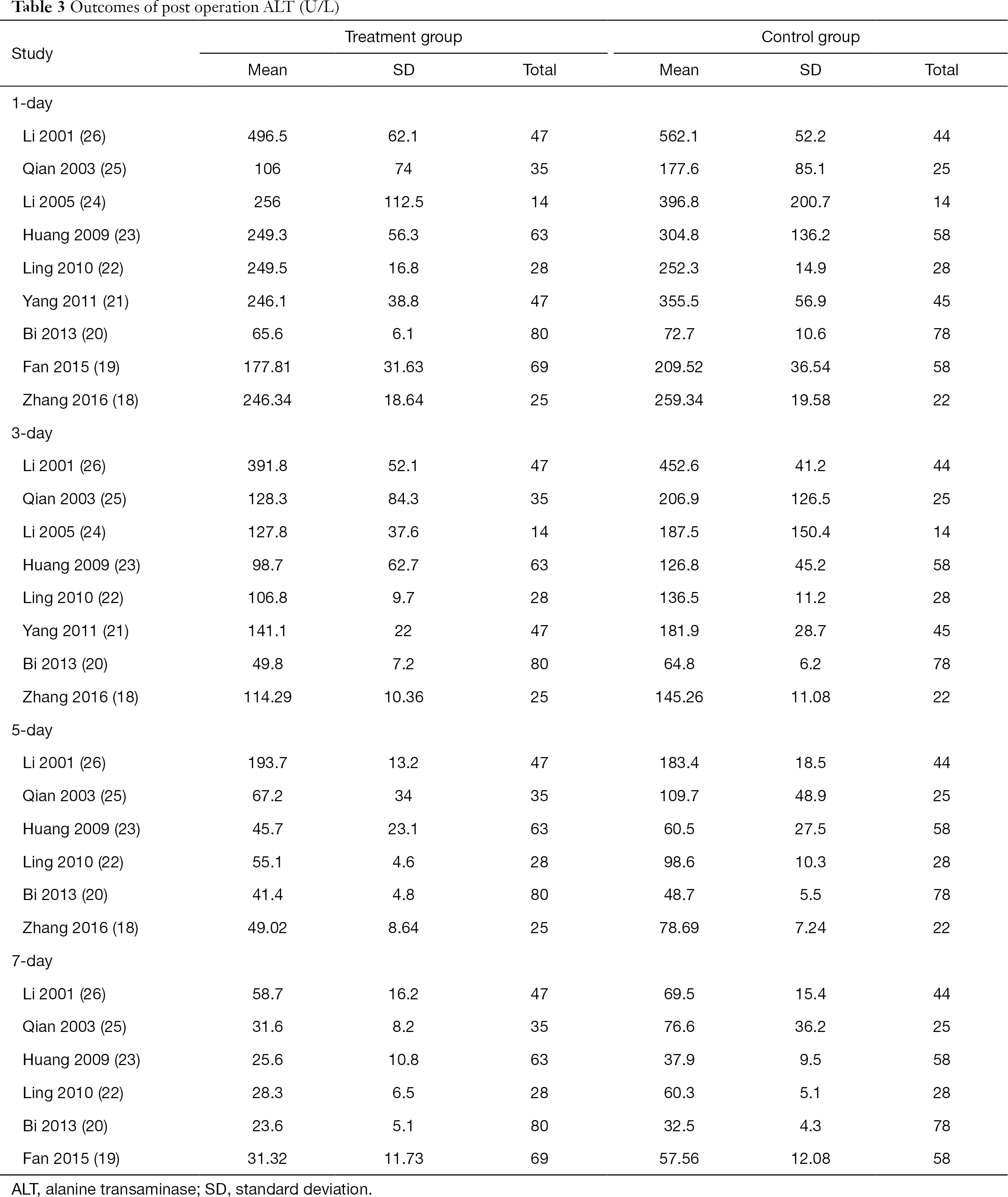 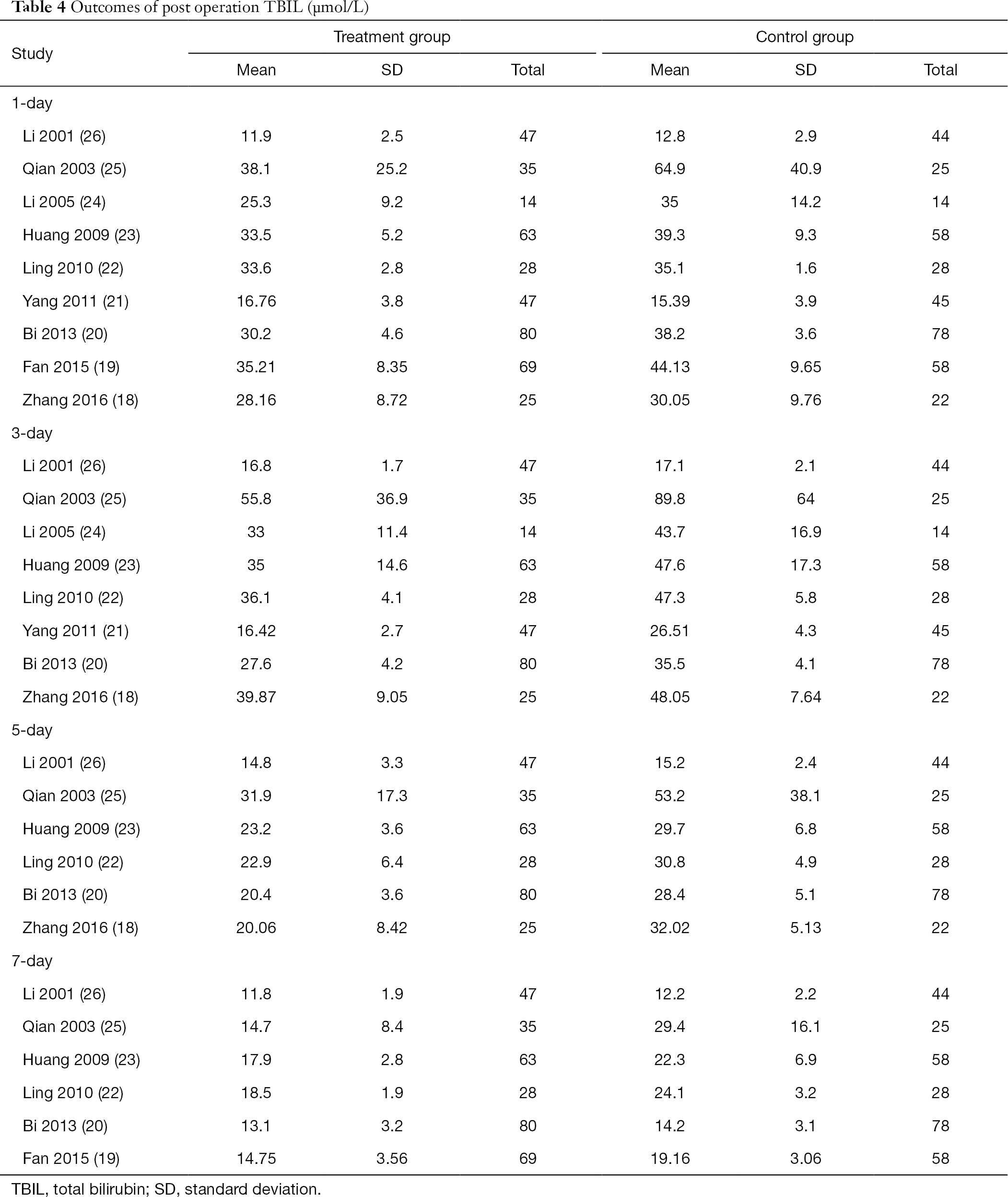 UTI, an acidic glycoprotein with a molecular weight of 67,000, is a protease inhibitor purified from fresh human urine (27,28). In clinical treatment, UTI has been widely used in acute pancreatitis and shock (29,30). As a protease inhibitor, UTI holds the ability to reduce the activation of leukocytes and the release of inflammatory cytokines in liver IR injury (31). Moreover, UTI stabilizes lysosomal membranes and suppresses the release of lysosomal enzymes (32). In our study, hepatic IR caused notable hepatocellular damage since liver enzymes such as AST, ALT and TBIL elevated significantly, and the degree of liver injury was remarkably reduced by UTI. Some studies revealed that postoperative liver function and enzyme markers of liver injury increased much more in Pringle maneuver (PM) than that in hemihepatic vascular occlusion (HVO) compared with preoperative results (33,34). Furthermore, liver metabolism and tissue oxygenation were markedly affected by occlusion of the liver hilus (35). In other words, both vascular occlusion type and liver ischemia time would affect patients’ preoperative liver function. Five of the nine studies in our meta-analysis took PM to occlude liver blood flow, and most studies had a vascular occlusion time over 15 minutes, indicating severer hepatic injury. Based on these results, it seems that UTI may offer a protective role in hepatectomy under vascular occlusion, especially in PM with long occlusion time.

Patients with liver cirrhosis, steatosis or undergoing major liver resections with PM are known to be at high risk for developing IR injury (36,37). For this reason, we intended to perform a subgroup analysis on each of these. However, the lack of numerical reporting of patients in each of these subgroups and the few studies included within each comparison made us unable to do so.

Quality of evidence and future trials

In our meta-analysis, all the included studies were RCTs, which could reduce biases to some extent. However, only one of the included RCTs was at low risk of bias, reflecting poor study design of lacking adequate randomization and blinding in the field of hepatectomy. Poor study design can lead to erroneous conclusions (38). The end points of the nine RCTs included in this meta-analysis are not exactly the same, increasing the possibility of selection bias. The number of studies included was few. Thus, there is a high risk of type I and type II errors. Therefore, the risk of both random and systematic errors in the trials assessed in this review is high.

Since surgical skills, operators’ experience and the application of new devices all affect patients’ outcomes significantly, inclusion of earlier studies may partly explain the high heterogeneity of the results. Due to apparent heterogeneity across studies and a paucity of included studies, the findings from our study should be dealt with some caution.

Adequately powered and better-designed RCTs are required, including the identification of more appropriate markers of liver function or dysfunction under treatment of UTI. Along with recent UTI related clinical studies also indicated the anti-inflammatory effect in the IR injury and hence plays a predominant role in organ protection (39-41). This may aid in the treatment of patients undergoing hepatectomy with vascular occlusion and improve outcome.

Conflicts of Interest: All authors have completed the ICMJE uniform disclosure form (available at http://dx.doi.org/10.21037/apm.2020.04.28). The authors have no conflicts of interest to declare.