Esophageal cancer (EC) is a common upper digestive tract malignant tumor especially in eastern Asia and Africa. It is the seventh most common cause of morbidity and sixth most common cause of mortality among the malignant tumors worldwide (1). Despite advances in the multimodality treatment of EC, the 5-year survival rate of esophageal cancer continues to remain low (–40%) (2). Lymph node metastasis (LNM) is one of the most significant prognostic factors affecting the survival of EC (3).

The Union for International Cancer Control (UICC) divided the esophagus into four segments. Different tumor locations have different patterns of LNM, which plays an important role in the evaluation and treatment of EC. Usually, radiation oncologists delineate clinical target volume (CTV) focusing on areas with high rates of LNM based on the location of tumor, which still remains disputed. Moreover, thoracic esophageal cancer (TEC) spanning segments are often encountered, whose LNM characteristics can be different from mono-segmental TEC. But the principles of TEC spanning are poorly understood. The benefits of precision radiotherapy may be offset by following the same criteria of CTV delineation. This retrospective study aimed to investigate the LNM pattern of trans-segmental TEC which can help in designing CTV.

This retrospective study was approved by Fujian Cancer Hospital Institutional Review Board. All patients provided written informed consent prior to treatment, and all information was anonymized prior to analysis.

In this study, we included patients with TEC who underwent surgery during the study period from January 2006 to December 2010 at Fujian Cancer Hospital. The patients who satisfied the following conditions were included: (I) histologically proven primary esophageal squamous cell cancer, (II) the upper and lower boundaries of the tumor were clearly defined by endoscopy, esophageal barium meal, and high-resolution CT chest examination before operation in our hospital, and (III) underwent radical esophagectomy and three-field lymph node dissection. The exclusion criteria were: patients who received preoperative radiotherapy or chemotherapy, those having cervical esophageal cancer and those with distant metastasis. Patients with prior thoracic surgery before esophagectomy were also excluded.

To accurately describe the pattern of LNM, the regional lymph nodes were named as described by the Japanese Society for Esophageal Diseases (JSED) and AJCC. The characteristics of LNM pattern were collected retrospectively from postoperative pathological LN status. Then we compared the differences in LNM between trans-segmental and mono-segmental TEC, to make precise delineation of CTV for routine clinical practice.

Categorical data are presented as numbers and percentages. The LNM rates were compared between the groups by Chi-square test or Fisher’s exact test as applicable. Data were analyzed using Statistical Package for Social Sciences (SPSS, Chicago, IL, USA) version 22.0 for Windows. A two-tailed P value <0.05 was considered statistically significant. 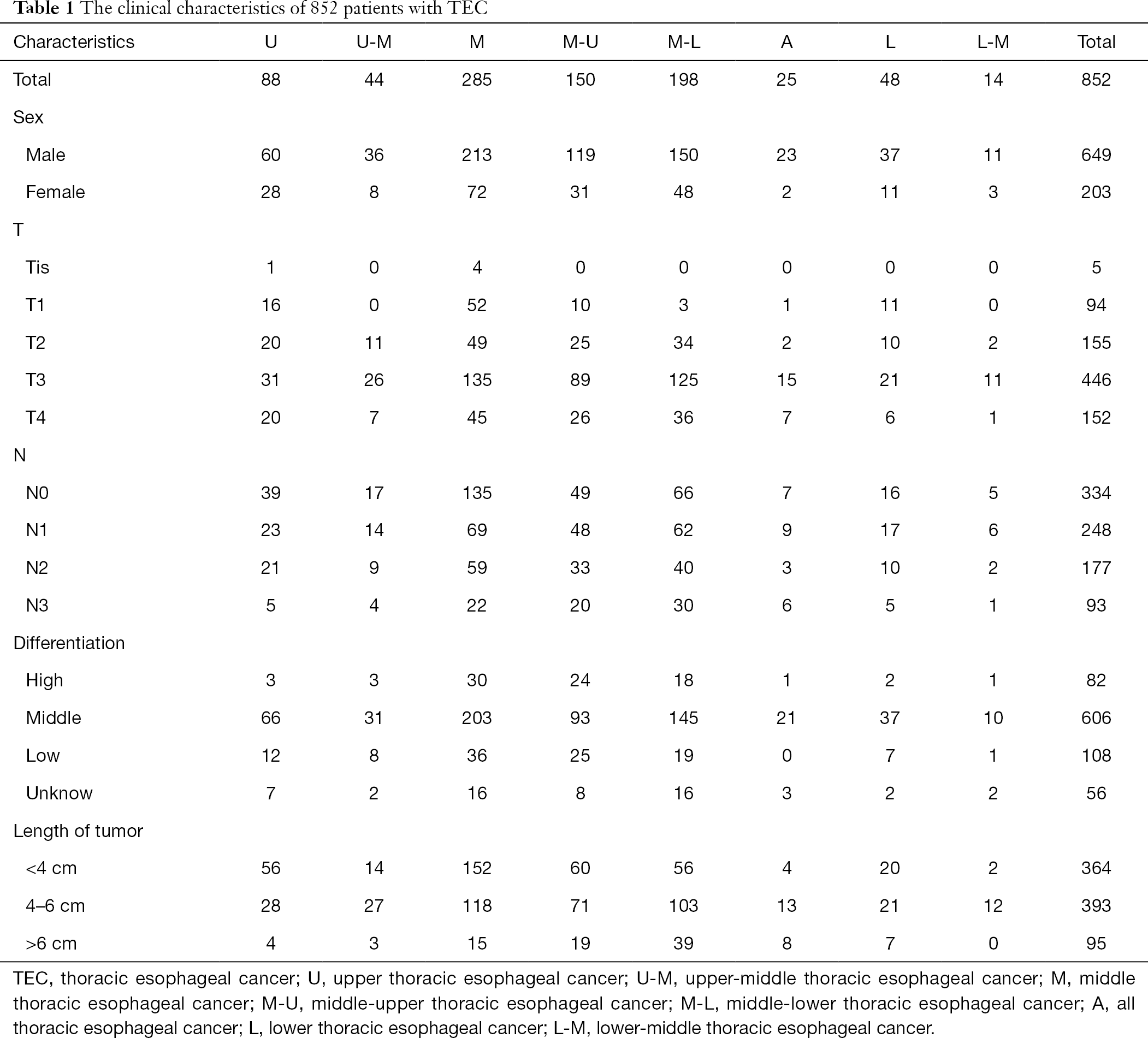 EC is one of the commonest digestive tract cancers associated with high incidence of morbidity and mortality. In recent years, the prognosis has significantly improved with the multimodality treatment, however the 5-year survival rate is still low because of the early metastasis. Locoregional recurrence is the main cause for treatment failure after radical esophagectomy, and regional lymph nodes are the most common sites for recurrence (4). Some studies have LNM to be an important prognostic factor for the long-term survival of patients with EC after radical resection (5-7).

Radiotherapy, chemotherapy and surgery are the main components of multidisciplinary treatment of EC. Radiotherapy can improve local control and long-term survival rate significantly. Cheng et al. retrospectively analyzed 1,715 patients with TEC who underwent radical surgery. The 5-year overall survival rates of surgery and surgery plus postoperative radiotherapy were 21.3% and 34.2%, respectively. The median survival time was 21.9 and 35.4 months, respectively (8). A study based on the SEER database showed that multimodal therapy (preoperative or postoperative radiotherapy plus surgery) had a better prognosis than surgery only in the 3,292 patients with EC included in the study (9).

The LNM pattern of EC is one of the decisive factors in planning the radiotherapy. It’s hard to define the CTV margin for radiotherapy in EC without clear understanding of LNM pattern. Due to the complex lymphatic drainage system of the esophagus, the LNM of EC is characterized by skipped and bidirectional spread (10). It has been systematically elucidated in the previous studies that the depth of tumor invasion, vascular invasion, tumor length, histological type and tumor differentiation affected the LNM pattern of EC, especially the primary tumor location (3,11-13).

Radiation oncologists always design the CTV according to the location of primary tumor and its lymphatic drainage. Theoretically, the LNM of upper TEC tend to occur in upper mediastinum and neck. The LNM of middle TEC are skipped and bidirectional, so the upper, middle mediastinal and the abdominal lymph nodes all have high chances of metastasis. The lower TEC is prone to metastasize to abdominal lymph nodes. Irrespective of the segment of the esophagus involved, the paraesophageal lymph nodes always have high incidence of metastasis (16).

However, many patients in clinical practice have trans-segmental TEC. And there are very limited studies focusing on the difference in characteristics of LNM between trans-segmental and mono-segmental TEC. The present study was designed to address this issue and provide reference for clinical use while planning radiotherapy.

The U TEC had a higher incidence of LNM in upper mediastinum than U-M TEC (25% vs. 5.7%). The most common lymph node regions (LNR) to develop metastases for U and U-M TEC were cervical, upper, middle paraesophageal and zones 1, 2, 4. NCCN guidelines recommend that the superior border of the CTV for U TEC should include zone 1 and cervical paraesophageal LNR and the inferior border to be extended up to the zone 4 LNR. So, for the U-M TEC, the zone 1, 2, 4 and 5, cervical, upper and middle paraesophageal LNR were recommended, the same to the U TEC.

Both the L and L-M TEC had high LNM rates in middle mediastinal and abdominal lymph nodes. Additionally, the L-M TEC was prone to metastasize to cervical LNR. The most common sites of LNM rates in L TEC were group 2, 3 and 7, middle paraesophageal, and zone 7. The cases of L-M TEC were limited in this study (n=14). The rates of LNM were 42.9% (cervical paraesophageal), 28.6% (group 7), and 21.4% (group 3), 16.7% (middle paraesophageal), and 16.7% (zone 7), respectively. It is recommended to include the middle mediastinal and abdominal LNR while delineating the CTV for L and L-M TEC. However, it may be extended up to zone 4 and down to group 7 LNR according to the results of this study. Moreover, unlike in L TEC, the cervical paraesophageal LNR should be covered in the CTV delineation of L-M TEC as per the findings of this study.

The M, M-U, M-L and A TEC were all characterized by high LNM rates in middle mediastinum with the LNM rates of 18.9%, 28.0%, 34.3%, and 44.0%, respectively. In the M-U TEC, the most common LNM site was the cervical nodes. LNM tended to appear in the upper mediastinum and neck in M-U and A TEC respectively. In M-L and A TEC, the common LNM site was the abdominal nodes. We also found that the A TEC had high incidence of LNM in all the LNR. Cervical paraesophageal lymph node region is traditionally not added to CTV for M TEC in clinical practice. However, the present study found the LNM rates in neck to be as high as 24.0–46.7%, even for the tumor extending to the lower third of thoracic esophagus. Hence, according to our study, the irradiation field for M-U TEC should be extended from neck to zone 7, including all the paraesophageal regions, zone 1, 2 and 4. For M-L TEC, the CTV should cover zone 2, 4, 7, left paracardial, lesser curvature, left gastric lymph nodes and all paraesophageal lymph nodes. For A TEC, the CTV may include zone 2, 4, 7, left paracardial, lesser curvature, left gastric and all paraesophageal lymph nodes.

There are several limitations of this study. First, the sample size in our study was not large enough. Second, only cases of esophageal squamous cell carcinoma was included in this study. Third, we did not analyze the LNM pattern of cervical esophageal carcinoma. Moreover, we did not assess the impact of various other parameters such as depth of invasion, vascular invasion, and chemotherapy on LNM pattern. Future prospective studies are required to validate the findings of this study.

In general, the LNM pattern of trans-segmental and mono-segmental TEC are different. The irradiation field must be determined by experienced radiation oncologists according to the primary tumor location. Precise delineation of CTV may improve the local control rate and overall survival for patients with EC.

Thank all those who have contributed to the writing of this thesis.

Conflicts of Interest: All authors have completed the ICMJE uniform disclosure form (available at http://dx.doi.org/10.21037/apm.2020.04.10). The authors have no conflicts of interest to declare.

Ethical Statement: The authors are accountable for all aspects of the work in ensuring that questions related to the accuracy or integrity of any part of the work are appropriately investigated and resolved. This retrospective study was approved by Fujian Cancer Hospital Institutional Review Board. And the Ethical approval number is YKT2020-001-01. All information of patients was anonymized prior to analysis.