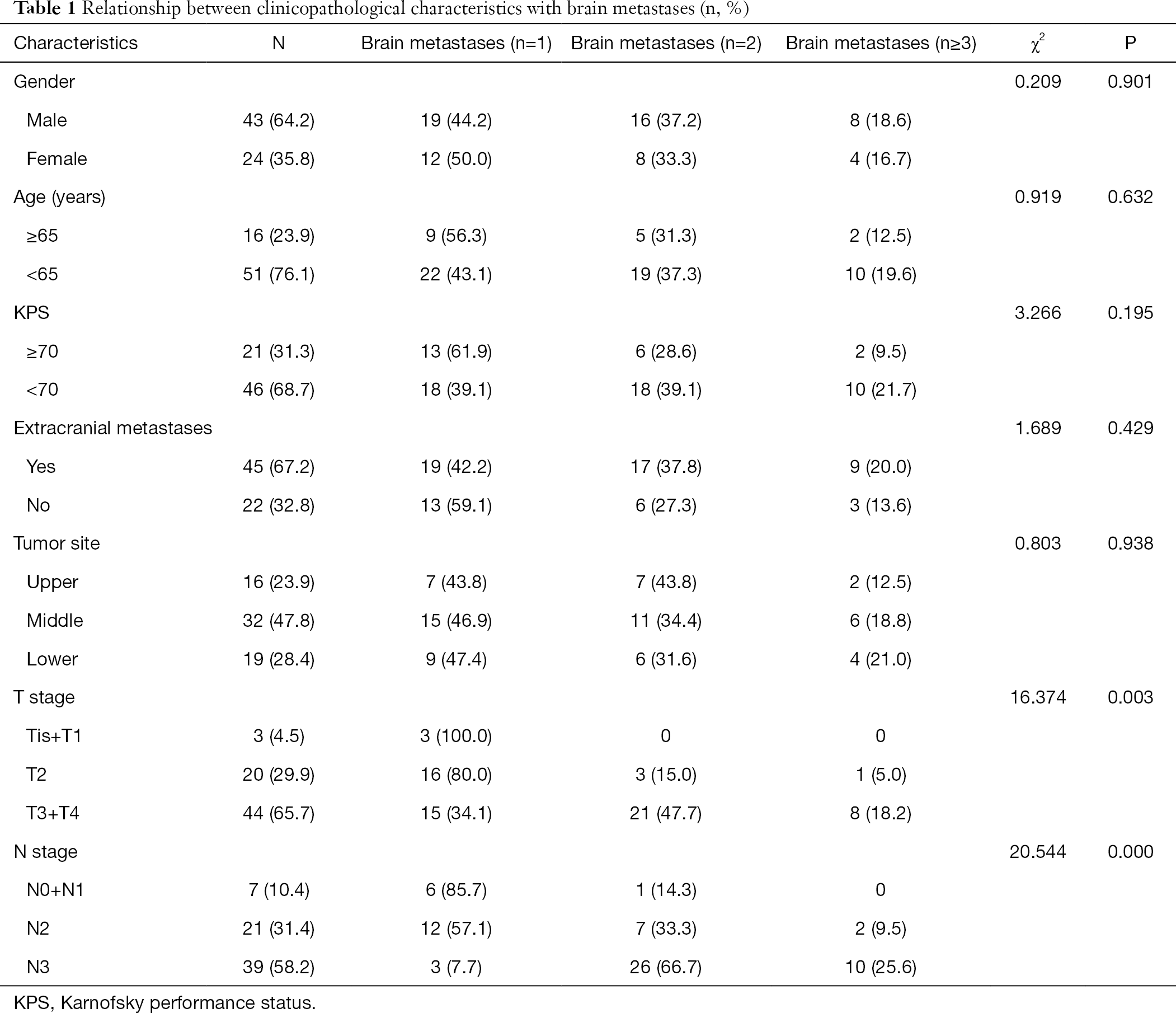 Relationship between BM-ESCC and survival prognosis 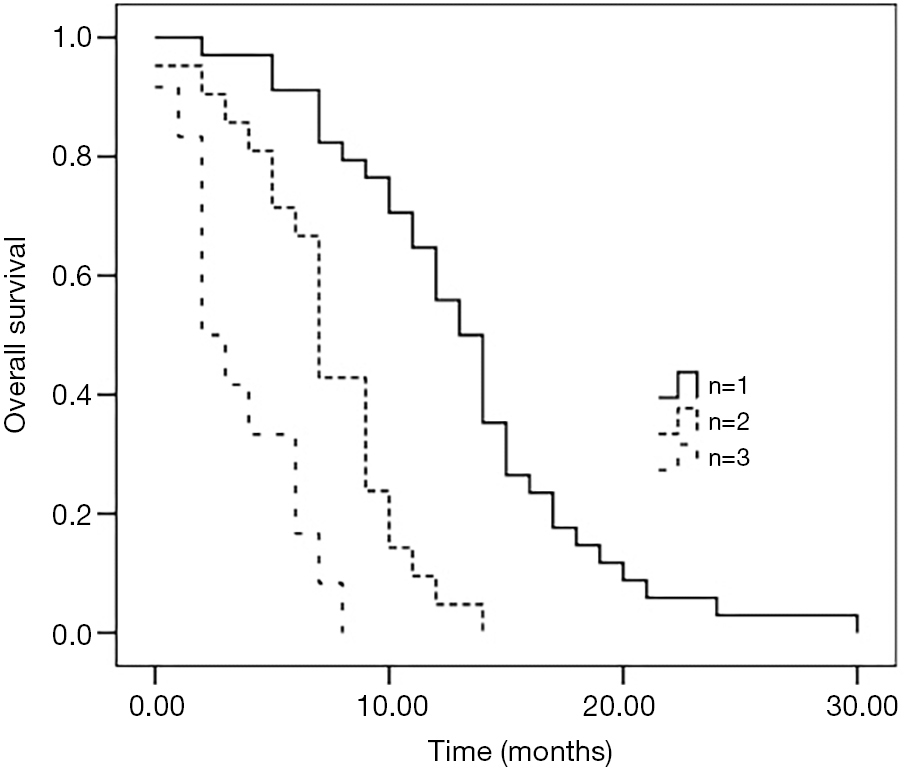 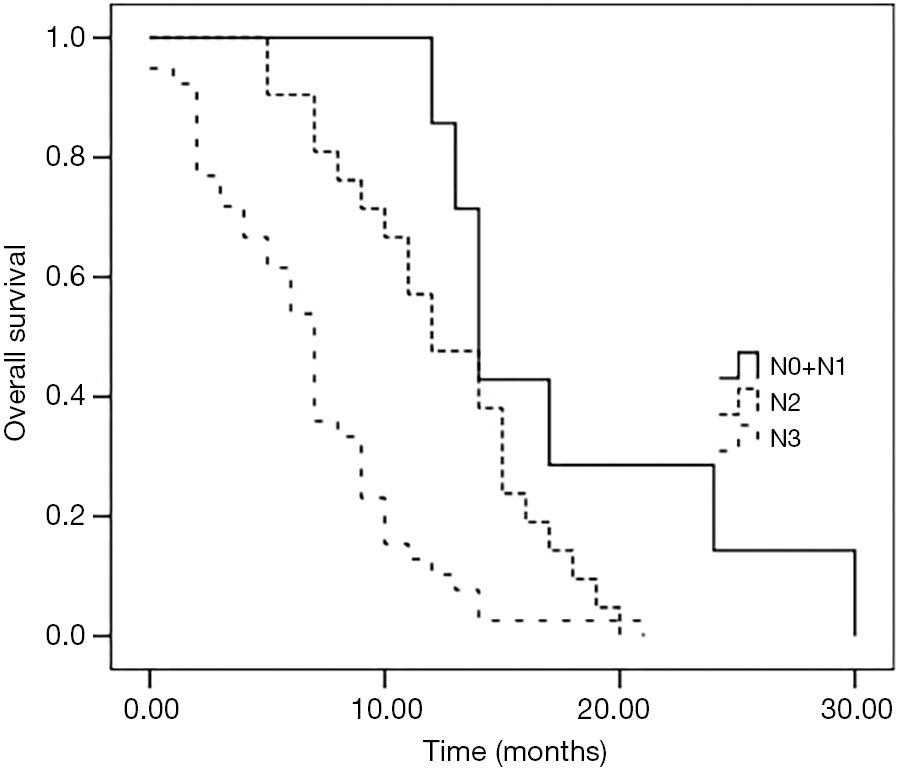 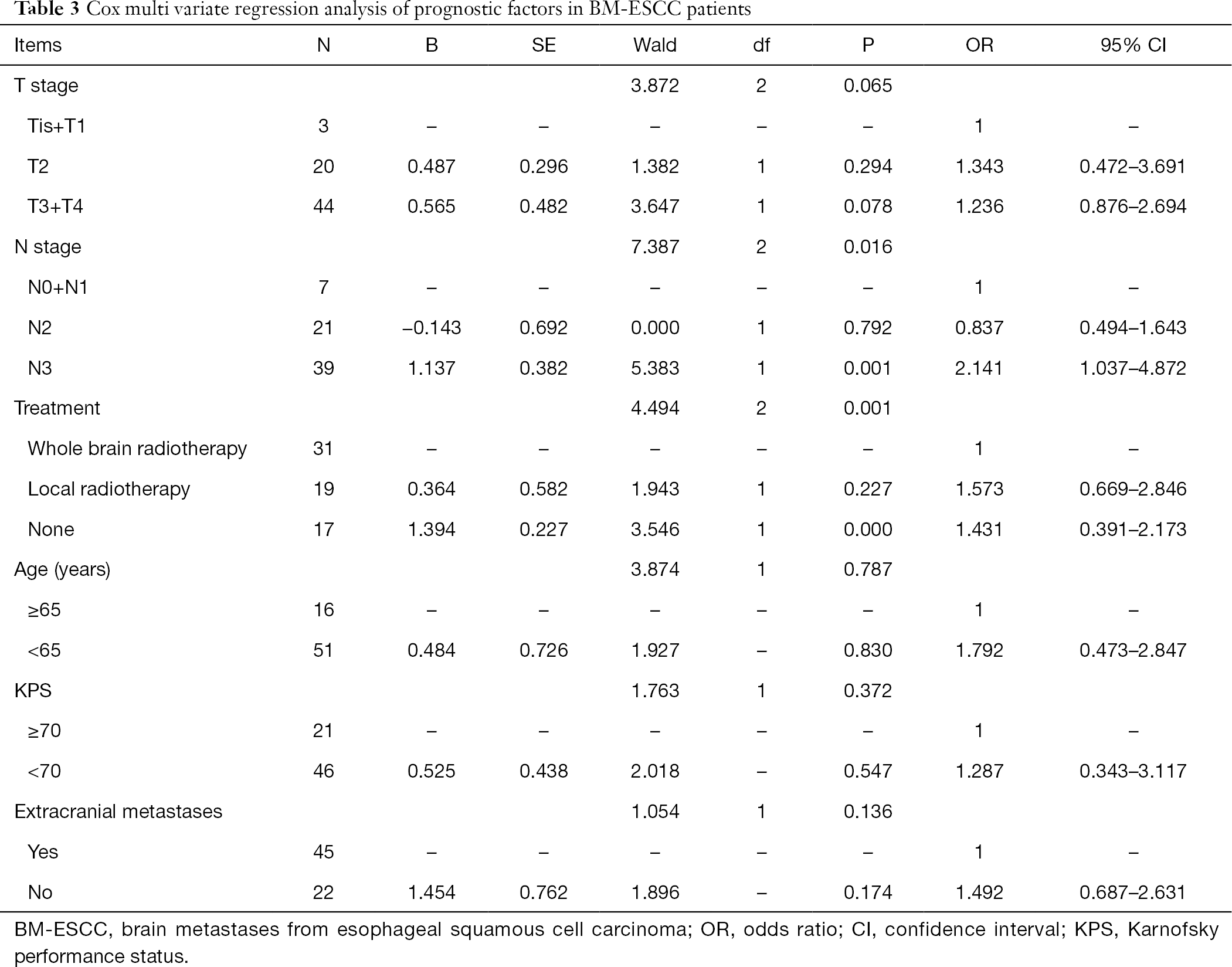 In this study, 72.7% and 61.5% of patients in a stage higher than T3 and N3, respectively, had ≥2 brain metastases. Due to the limited sample size, T3 and T4 were combined, which might have led to a bias in the research results. Further study with a larger sample size is needed to determine whether it is more accurate to use I–IV stages in assessment. T stage is an important indicator of advanced ESCC. The higher the T stage, the greater the likelihood of metastasis (15). Logistic regression analysis revealed that a higher T stage was associated with an increased risk of brain metastases in patients with BM-ESCC. However, there was no statistical difference, which may be related to the small sample size. N staging is of great significance for the choice of treatment of esophageal cancer, and it is an independent risk factor for the evaluation of prognosis based on the chemotherapy using paclitaxel (16). This study yielded similar results. The risk of brain metastases was significantly lower in N0 + N1 patients than in N2 and N3 ones. This provides indirect evidence that N staging is more effective than T staging in predicting prognosis. The results are similar to the conclusion of Kanemoto et al. (12). This conclusion is further confirmed by the N stage-stratified prognosis analysis. In this study, the median survival time of patients with BM-ESCC was 9.65 months. This is higher than that reported by Weinbery et al. (17), but similar to the reports of Chinese researchers (18). The reason for this difference may be associated with the major pathological type of subjects, which is adenocarcinoma in Europe and the United States, and squamous carcinoma in Asia (19). In addition, this study found that the number of brain metastases in patients with ESCC was positively correlated with long-term survival. However, this factor was not considered in previous studies (17,18), which may result in bias in the results. Common treatments for brain metastases from solid tumors, including esophageal cancer, are whole brain radiotherapy, stereotactic radiotherapy, and surgery.

There was no difference in survival between the treatments in patients with 1–4 brain metastases (20). however, neurological death or survival had been found in patients with a single metastasis by other randomized studies (21), which could bias the research study. This study found that whole brain radiotherapy significantly decreased the mortality in patients with BM-ESCC. It is speculated that whole brain radiotherapy can improve the local control rate of metastases, inhibit intracranial micrometastases, and reduce neurological death (22). This finding is similar to previous reports (23). T and N stages of primary esophageal tumors are proportional to mortality. It indirectly suggests that the volume of gastrointestinal tumors is closely related to prognosis (24,25). However, only a small number of subjects were included in the study, due to the low incidence of BM-ESCC. Moreover, the correlation between overexpression of genotypes, such as Her-2, and brain metastases from esophageal cancer was not examined (26). These are the limitations of this study.

We thank all the survey respondents who participated in the study and the survey field staff who did the interviews. We acknowledge in situation that were providing administrative and logistical support to data collection: Joint Logistics 900 Hospital, Fuzhou, China; The Cancer Organization of Fujian Province; We thank Jian Hua Wu, Na Li for promoting the survey. Dong-Shi Li for many helpful suggestions.

Funding: This study is supported by Medical innovation project of Fujian Health Committee (Grant No. 2018-CX-3).

Conflicts of Interest: All authors have completed the ICMJE uniform disclosure form (available at http://dx.doi.org/10.21037/apm.2020.04.23). The authors have no conflicts of interest to declare.

Ethical Statement: The authors are accountable for all aspects of the work in ensuring that questions related to the accuracy or integrity of any part of the work are appropriately investigated and resolved. The protocol was approved by the Medical Ethics Committee of General Fuzhou Hospital (No. 2018-015).