Transcatheter aortic valve implantation (TAVI) implantation is currently the main treatment option for patients with severe symptomatic aortic stenosis (AS) deemed surgically inoperable or at excessive surgical risk for surgery (1,2). Although the feasibility and efficacy of TAVI has been proven, the procedure itself is still related to inherent complications such as access site bleeding complications (BCs) and post-procedural paravalvular leakage (PVL) amongst the two most popular TAVI devices (3,4), including the balloon expandable Edwards SAPIEN (Edwards Lifesciences Ltd, Irvine, CA, USA) and the self-expandable Medtronic CoreValve (MCV) (Medtronic Ltd, Minneapolis, MN, USA). In recent years, new technologies of transcatheter heart valve system have been developed to specifically tackle these problems, including the 3rd generations Edwards SAPIEN S3 (ES3) and Medtronic’s Evolut R.

Compared to its predecessor, the ES3 has an additional polyethylene terephthalate skirt which was designed to reduce PVL (5). Meanwhile, the Evolut R platform is repositionable and features the built-in InLine EnVeo R delivery catheter sheath, which omits the external 18–24 F access sheath (6). Therefore, reducing the size of the overall profile down to 14 F. Given these new features, both the ES3 and Evolut R has been in the past, reported to have superior short-term outcome efficacy and safety compared to the older generation devices (7,8). In recent registries, both the ES3 and Evolut R demonstrated excellent outcomes in low-risk population (9,10). However, the peri-procedural and clinical outcome data of the comparison of ES3 and Evolut R is limited with inconsistent outcome data derived mostly from studies of relatively small sample size. Importantly, to date, no systematic review or meta-analysis has been performed.

Therefore, the aim of this study was to provide a summary effect estimate of the peri-procedural characteristics and clinical outcome of patients treated with ES3 versus the Evolut R.

We conducted a literature search of PubMed, Ovid and EMBASE (2002 to 2018). The search terms were as follows: transcatheter aortic valve implantation; transcatheter aortic valve replacement; third generation; balloon expandable; self-expandable; SAPIEN 3; Evolut R. Only English studies were included. We performed a multi-step assessment to identify the article qualified for this meta-analysis (Figure 1). 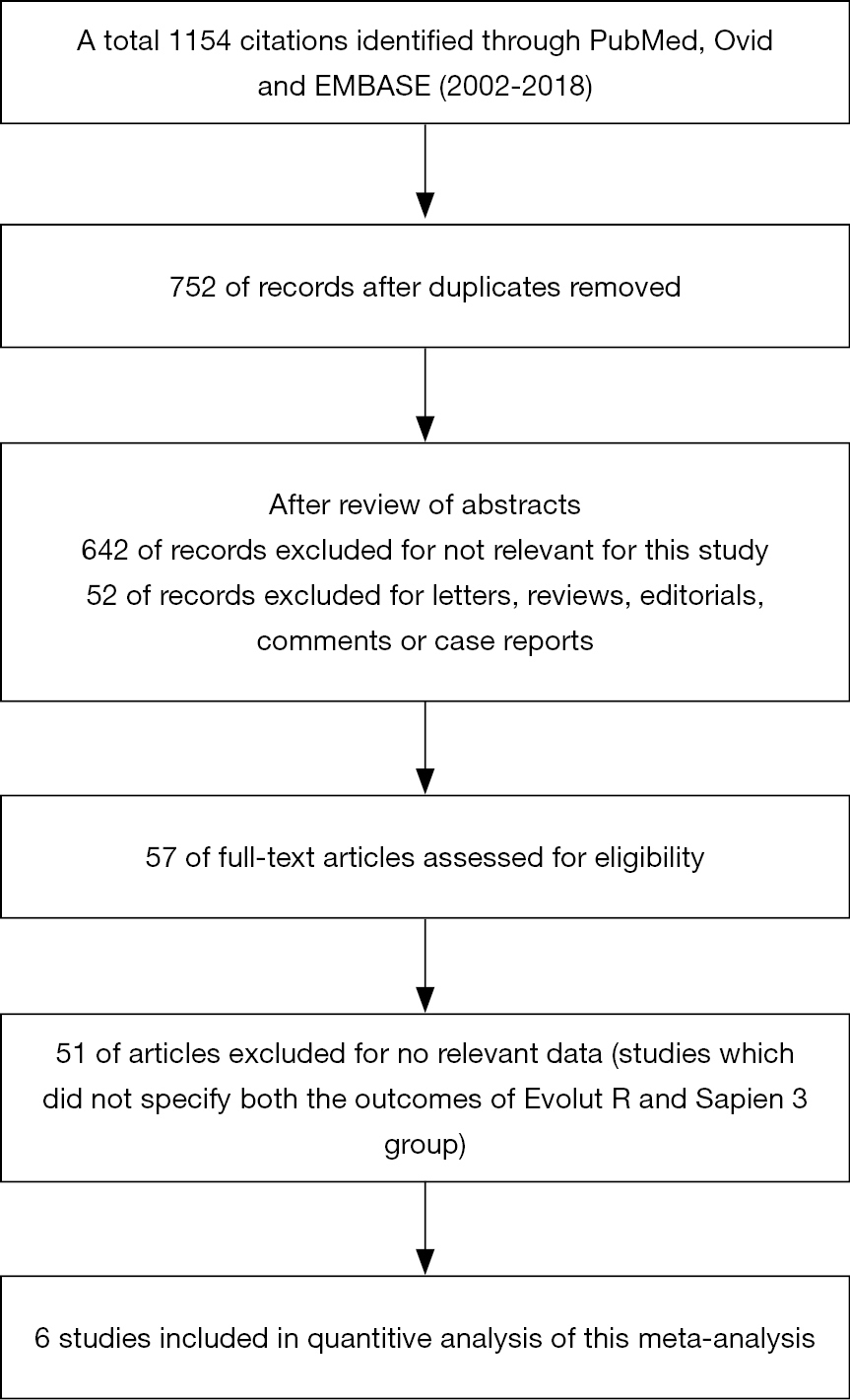 Inclusion criteria were as follows: (I) studies which reported the outcomes of ES3 versus Evolut R (II) articles were randomized clinical trial, prospective or retrospective cohort observational studies. Studies were excluded based on at least 1 of the following: (I) studies published in form of letter, review, editorial comment or a case report; (II) un-extractable data for statistical analysis. If duplicate data source occurred, one with the largest sample size was included to avoid duplicate publication.

Two authors (LYM and TJY) extracted the data independently, including authors name, regions, publishing years, number of cases, patients baseline characteristic [including the age, male proportion, the Society of Thoracic Surgeons (STS) score], and definition of outcome. The assessment of the quality of eligible studies was performed by the Newcastle-Ottawa scale (http://www.ohri.ca/programs/clinical_epidemiology/oxford.htm).

Results of categorical variables are present as (n%) and continuous variables are expressed as the mean ± standard deviation (SD). The inverse variance method was used to pool the odds ratios (ORs). For heterogeneity, it would be considered significantly if the p value was <0.05 and the I2 statistic was >50%. The DerSimonian and Laird random-effect methods were performed when significant heterogeneity was detected between the studies. Publication bias analysis was performed when meta-analysis included 3 or more studies, with egger test and funnel plot. Sensitivity analyses were also performed using the Stata command hetred. The hetred command allowed omit studies more than one (sequentially or combinatorially) until I-squared drop to the level predefined. All statistical analysis was performed by Stata MP Software (15.1 version) (StataCorp LLC, 4905 Lakeway Drive, USA).

A total of 1,154 citations were initially identified on PubMed, Ovid and EMBASE (2002 to 2018). After a carefully multistep assessment of 57 full-text, six observational studies were finally included (11-16), yielding 1,664 patients, of which, 768 (46%) used ES3 and 896 (54%) used Evolut R (Figure 1). The baselines characteristic, including male proportion, mean age, STS score are summarized in Table 1. All studies achieved a score of ≥6 in the NOS quality assessment, indicating a good overall quality of the included studies. The clinical endpoints of all included studies were reported according to the Valve Academic Research Consortium (VARC) 2 statemen. Publication bias was not assessed as there were less than ten studies included in the current meta-analysis. 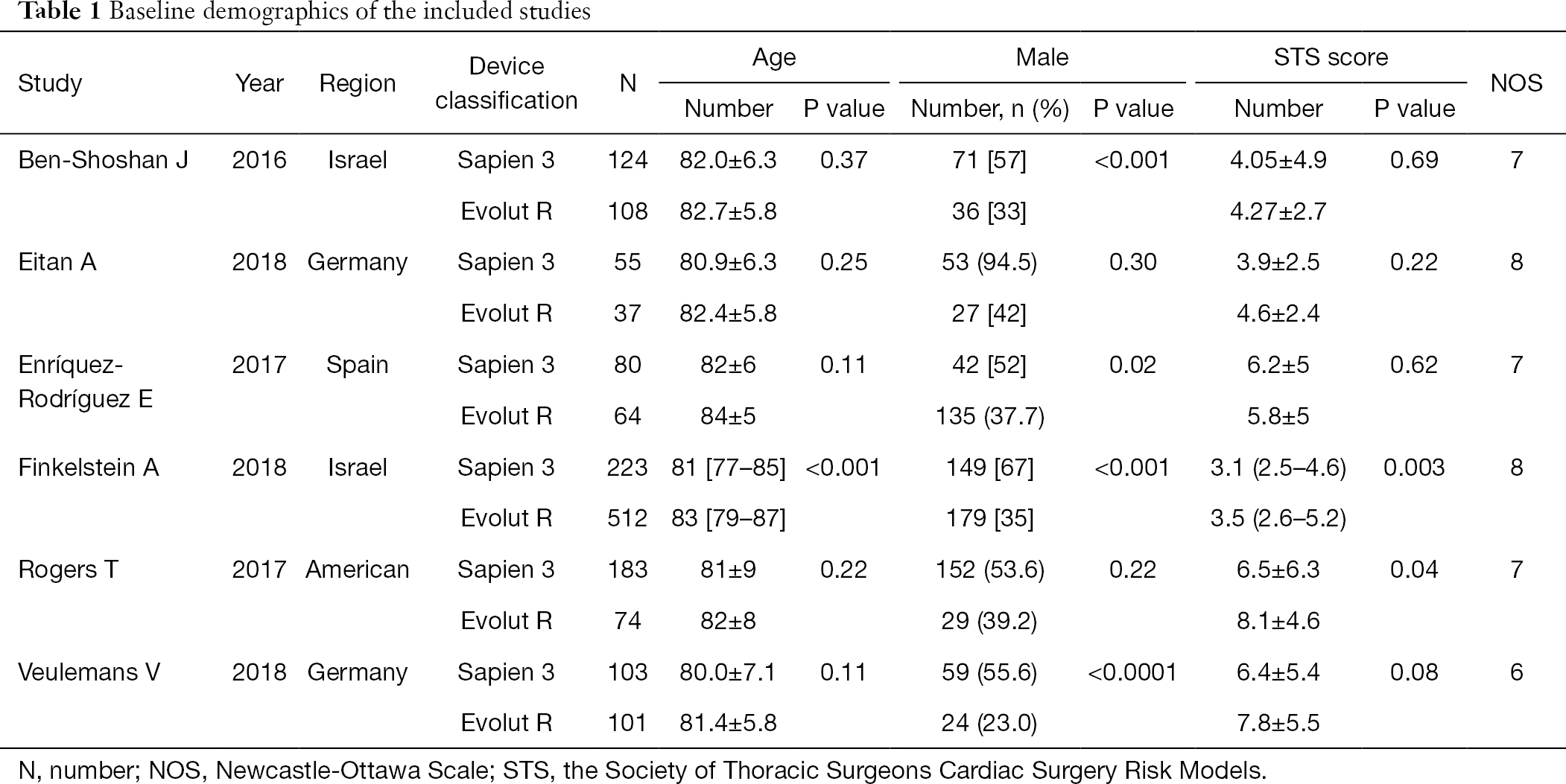 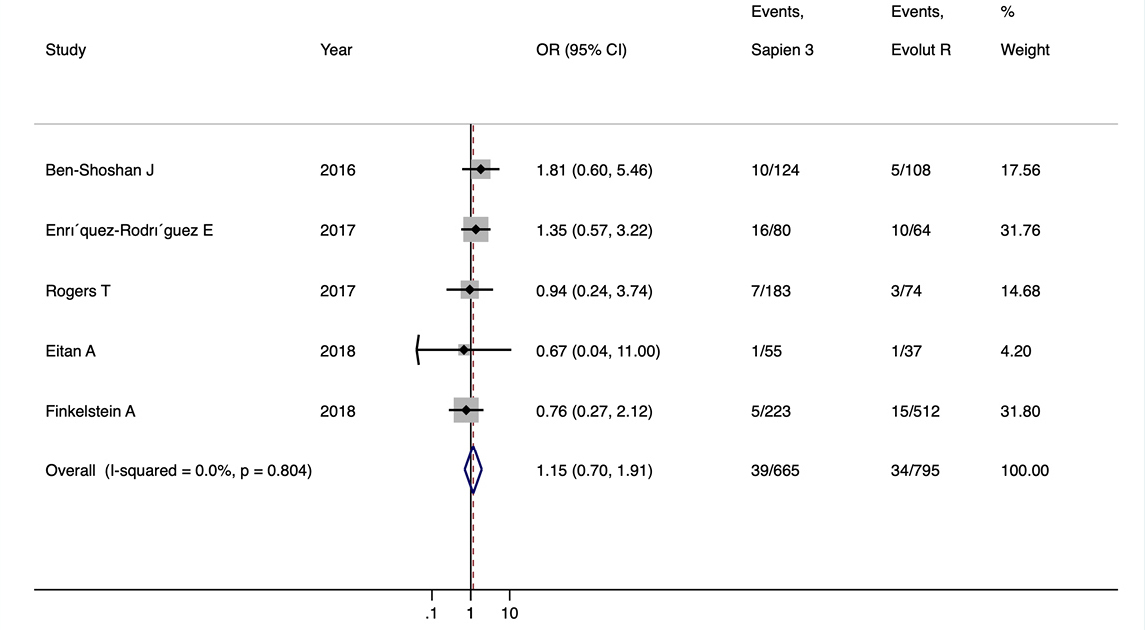 Figure 2 The meta-analysis for device success. 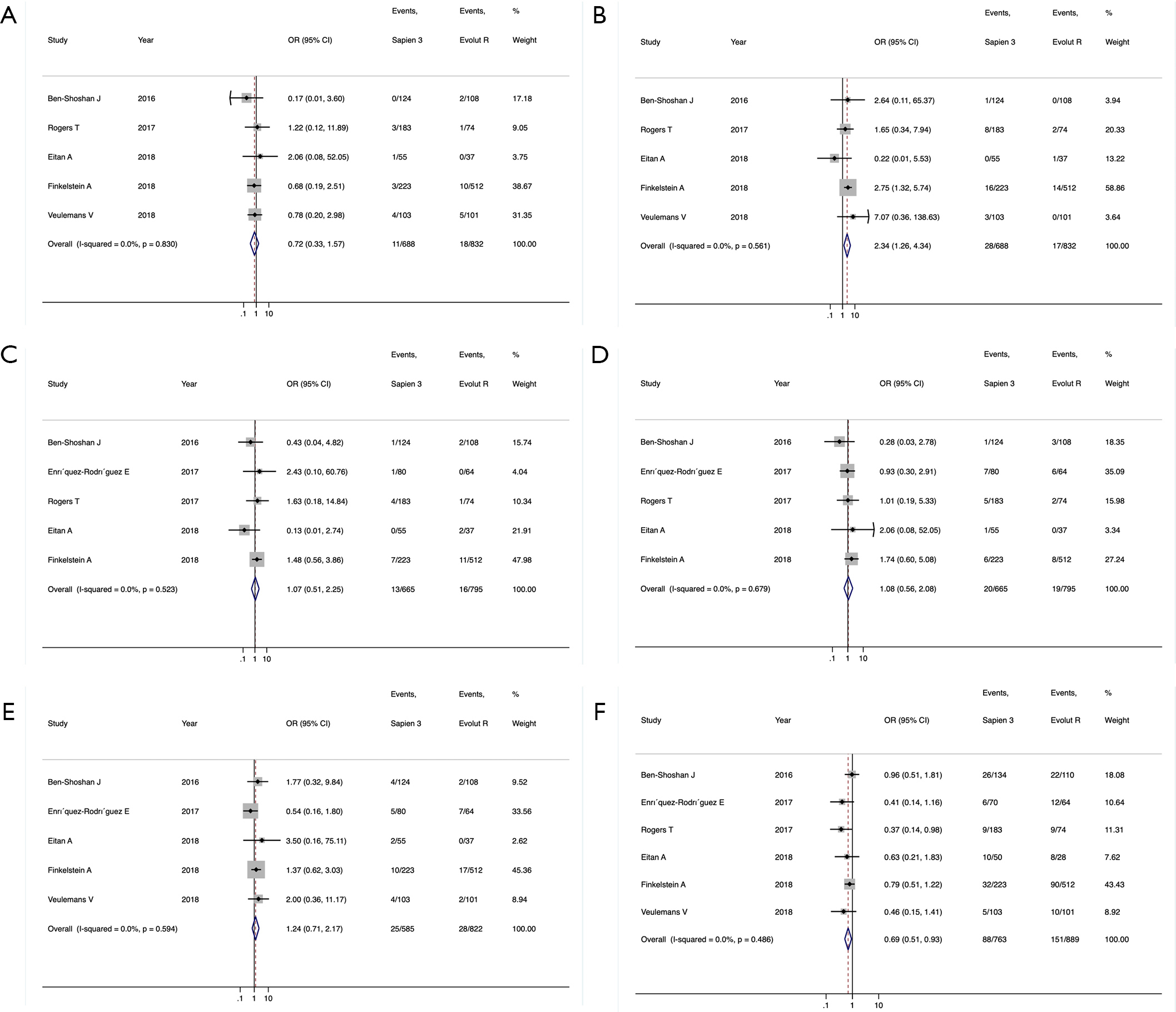 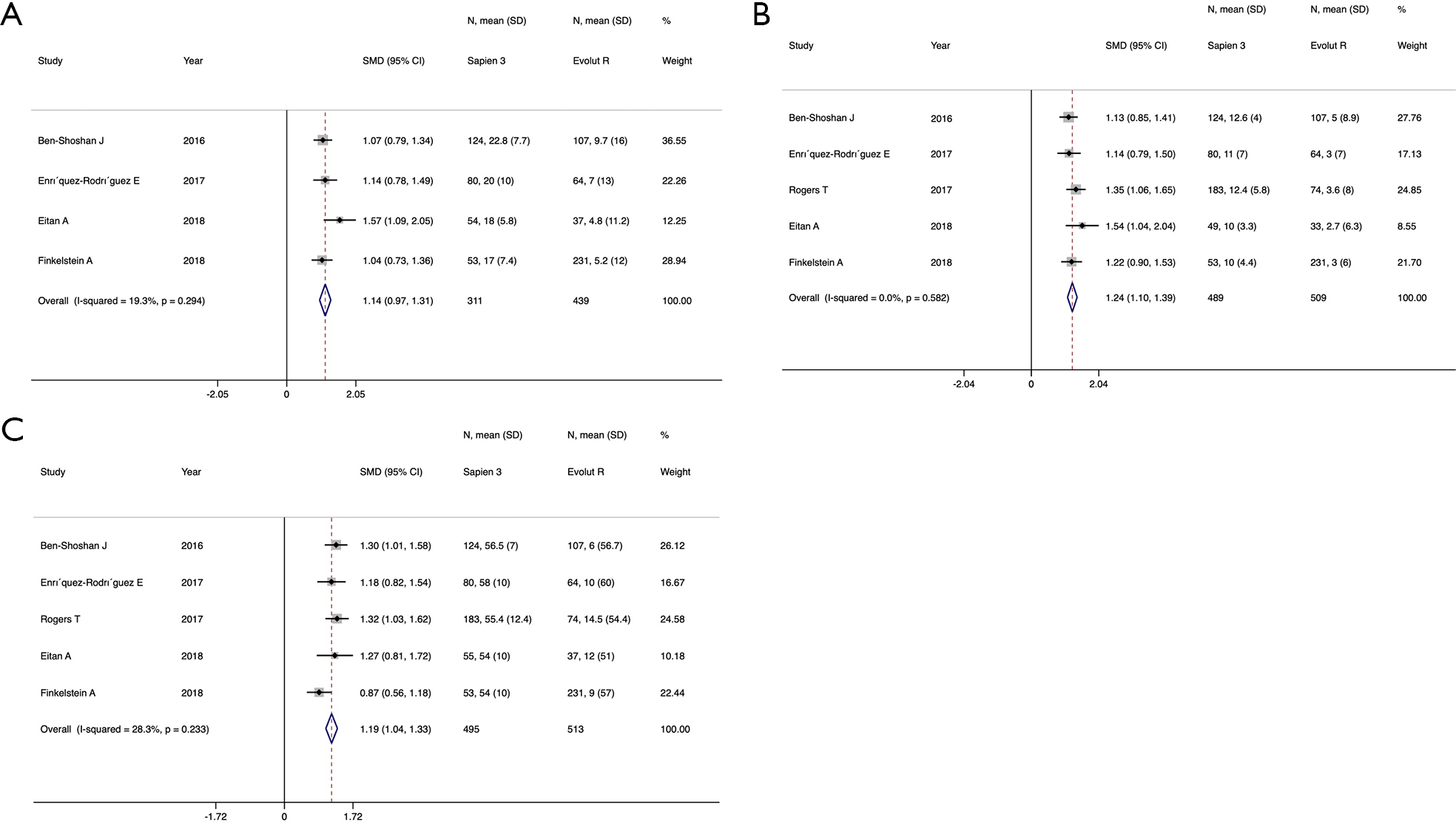 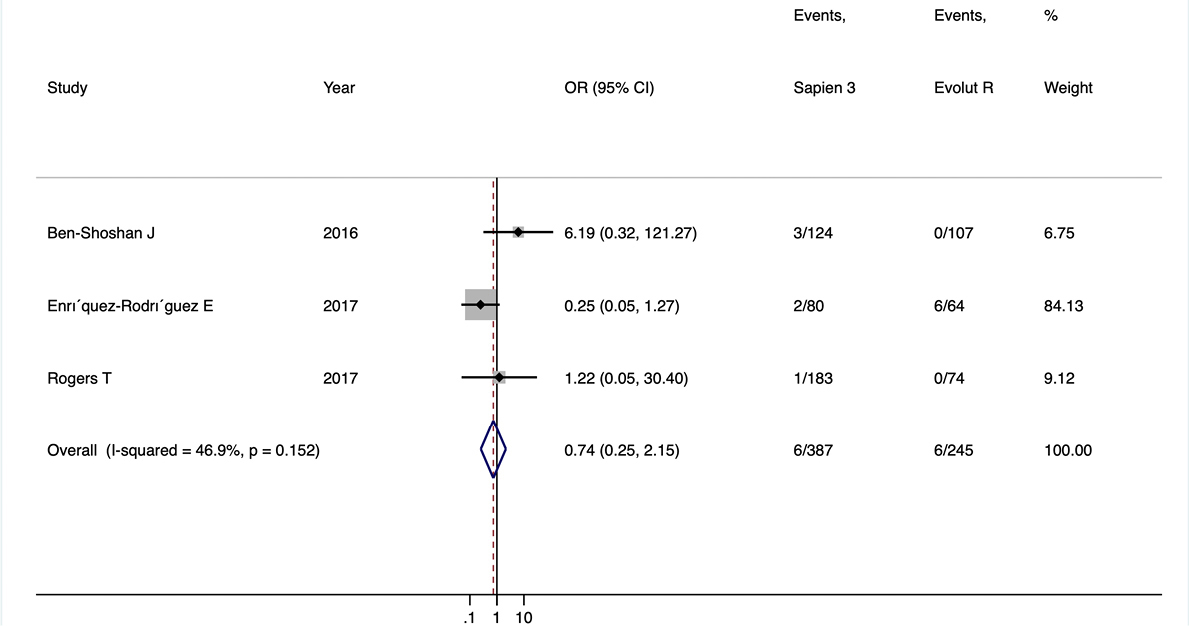 Figure 4 The meta-analysis for post-procedural paravalvular leakage (moderate and severe). 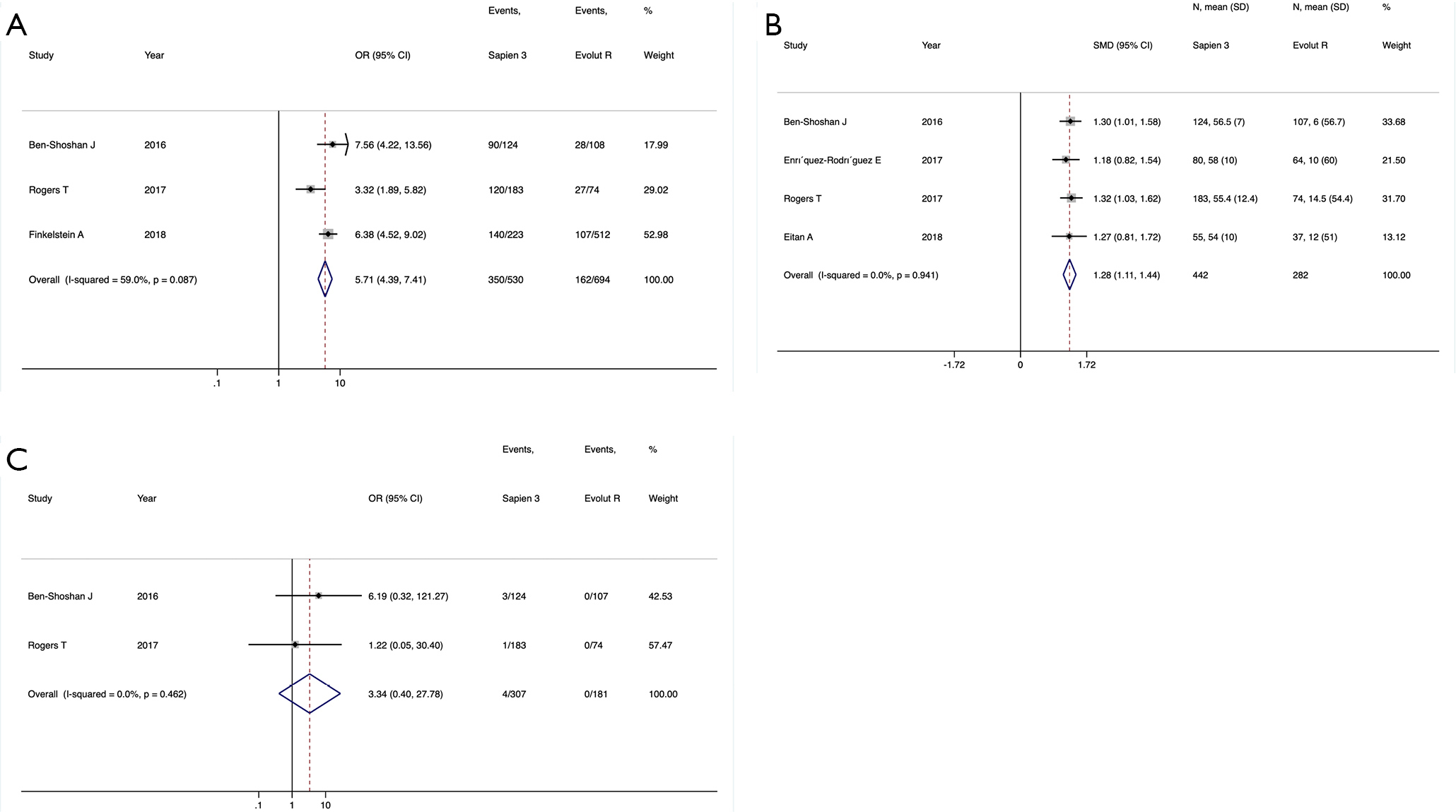 The main finding of the current meta-analysis are as follows: (I) both devices showed comparable procedural success rate and short-term mortality; (II) the ES3 group was associated with higher risk of AKI, while the Evolut R group had higher rates of PPMI after-TAVI; (III) the rate of stroke, BCs, VCs, and PVL after-TAVI were statistically insignificant between the two groups; and (IV) the ES3 group had higher post-procedural transaortic pressure gradient and higher LVEF.

Both devices had demonstrated comparable procedural success rate in the current study. This result is consistent to a prior large multi-center study comparing ESV and Medtronic CoreValve (MCV) (Sapien 96.6% vs. MCV 95.6%) (17). In a meta-analysis by Panchal et al. (18), they also reported similar device success rate between the two devices. However, in the randomized controlled CHOICE study (19), they reported that MCV had a lesser procedural success rate compared to Sapien XT (MCV 77.5% vs. Sapien XT 95.9%; P<0.001), which was likely due to the lower rates of severe PVL assessed using angiography with the Sapien XT compared to MCV.

The Evolut R group had higher rates of post-dilation compared to the Sapien3, which is likely due to the nature of the design of this device. The longer self-expandable prosthesis is generally implanted lower and oversized for the purpose of reducing PVL. Similarly, both the Evolut R U.S. Study (6) and International FORWARD study (20) reported a post-dilation rate of around 30%.

Both devices had no statistical mortality difference at 30-day follow-up. This result is in line with a meta-analytic study conducted by Jilaihawi et al. comparing the outcomes of first-generation devices (MCV 7.1% vs. Sapien 7.5%) (21). Similarly, the CHOICE study has also reported comparable mortality between the two older-generation MCV and Sapien XT (MCV 5.1% vs. Sapien 4.1%, P=0.77) (19). As TAVI technologies progress over the years, survival has improved tremendously with the 3rd-generation devices. However, long-term mortality of both Evolut R and devices still requires further studies.

Although the overall incidence of short-term stroke was statistically insignificant between the two devices in the current study (2.0% vs. 2.0%), the rate of stroke in both groups was lower compared to their predecessors in the CHOICE, PARTNER 1, and US COREVALVE high risk study (2,19,22). The reason for this is likely due to the smaller and improved delivery systems of the 3rd-generation Evolut R and Sapien3 platform. As well as that, the reduction of post-TAVI PVL necessitating post-dilation in the 3rd-generation devices is likely one of the reasons for the reduced rate of stroke.

From a multicenter study conducted by Kodali et al. (5), the rate of AKI was lower (high risk/inoperable cohort: 1.7%; intermediate cohort: 1.4%). In another separate study consisting of 622 patients implanted with Sapien3 (23), the rate of AKI (2.7%) was also lower compared to the current study. However, the inclusion criteria of a large multicenter study were generally stricter, thus, baseline kidney function of the included patients is likely better compared to the current study. The proportion of prior renal dysfunction was 20–30% in three studies included in this meta-analysis (13-15), while this number was only 10% in articles of Kodali (5) and much lower in PARTNER randomized trail series (9,24). Additionally, larger volume centers with more experience in TAVI and patient selection is likely to have shorter procedural-duration and used lesser amount of contrast.

In the current study, the rate of bleeding and VCs were comparable between Sapien3 and Evolut R, which is in line with the meta-analysis by Panchal et al. (18). However, compared to the older-generation MCV (major and life-threatening BC: 41.7%; major VC: 5.9%) from the CoreValve High Risk Study (22), the rate of BC and VC were significantly lower with the Evolut R. Furthermore, the rate of major VC with the Sapien3 has also improved tremendously compared with the first-generation Sapien or second-generation Sapien XT (2,24). The reason for these trends in the third-generation devices is most likely due to the new-smaller delivery systems including the expandable 14- or 16-Fr transfemoral delivery sheath of the Sapien3 and the 14-Fr equivalent InLine sheath of the Evolut R platform.

Although the rate of PPM in the Evolut R group was higher than the Sapien3, the Evolut R possesses the ability to re-sheath and re-deployed which allows the operator for a second-chance of prosthesis deployment (6). In a study by Schulz et al. (7), they reported that recapture occurred in 22.1% of the Evolut R procedures, and a lesser mean depth of implantation (at the non-coronary side) was achieved with the Evolut R device (4.0 mm compared to 5.3 mm of the MCV group). On the other hand, the new polyethylene terephthalate skirt of the Sapien3 has increased radial force to reduce PVL (5), and due to this increased pressure on the conduction tissues situated below the aortic annulus, the rate of PPM was much higher compared to the Sapien XT (8.5%) (24). This result was also demonstrated in prior studies (8,25).

The Evolut R group has lower mean PG compared to the Sapien3, an explanation for this is likely due to the fact that self-expandable prosthesis generally has larger effective orifice area compared to Sapien3 (11). In additionally, the rate of post-dilation in the Evolut R was much higher compared to Sapien3. Thus, for the better hemodynamics (12). Compared to the previous generation devices, the third generation Evolut R and Sapien3 both exhibited improved post-TAVI moderate and severe PVL outcomes. In other observational studies comparing the third-generation devices, the results were also similar (25,26).

The main limitation of this study is that these results should be interpreted with caution as meta-analysis are not designed to give definitive answers or address issues at patient baseline level. Secondly, all the included studies were observational studies, and the lack of randomization could have contributed to selection bias. Thirdly, all the included studies did not provide specific details of the rate of recapture and the resulting impact on the depth of implantation with the Evolut R, which might have had a major impact on post-procedural outcome. Fourthly, substantial heterogeneity across studies was observed regarding pre-dilation and PVL. Moreover, of the included studies, none of the post-procedural echocardiographic results were assessed at a central core laboratory, thus, likely resulted in heterogeneity in the assessment of PVL across studies. Lastly, the lack of longer-term follow-up data does not allow for a robust conclusion on the clinical outcomes and late-onset complications of Evolut R versus Sapien3. Despite these limitations, this analysis may provide useful information for current practice and future research.

In conclusion, both devices have demonstrated excellent procedural success rate and short-term safety. At 30-day follow-up, both devices shared similar rates of mortality, BC, VC, stroke, and PVL. However, the rate of AKI was higher in the Sapien3 group, and the rate of PPM was higher in the Evolut R group. Nevertheless, these complications rates are lower compared to their predecessors.

Conflicts of Interest: All authors have completed the ICMJE uniform disclosure form (available at http://dx.doi.org/10.21037/apm.2020.03.36). The authors have no conflicts of interest to declare.