Severe community-acquired pneumonia (sCAP) is caused by the aggravation of lung tissue inflammation and it is associated with high morbidity and mortality. The mortality in hospitalized sCAP patients ranges from 25% to 50% (1,2). Despite recent advance in antibiotic treatment of CAP, the mortality remains high, and which adds heavy burden to the health care system (3-5). Disease severity assessment and early diagnosis of CAP may improve the prognosis, and reduce the cost of medical care. Many clinicians pay attention to the assessment of the severity of CAP. Until now, several scoring systems have been developed to predict prognosis. For example, the pneumonia severity index (PSI), the CURB-65, new sepsis definition (sepsis-3), the national early warning score (NEWS), EXPANDED curb-65 and Expanded A-DROP Score (6-11). However, most of them are limited in emergencies department (ED). Among these scoring systems, the CURB-65 score is a relatively simple assessment tool that focuses on only five factors that associated with mortality, therefore we selected CURB-65 score as the criterion in this study.

Several risk factors have been studied alone or in combination with illness severity scores in attempting to predict the mortality of community-acquired pneumonia. Among these risk factors, serum albumin (ALB) and red cell distribution width (RDW) are commonly used laboratory parameters in hospitalized patients. Serum ALB is a routine marker which reflects both nutritional status and systemic inflammation. Recently, it has been showed that low serum ALB level is associated with mortality of community-acquired pneumonia (12-17). RDW measures the size variability of erythrocytes, and it is widely used in the diagnosis of anemia. Many studies reported that high RDW level is associated with poor short-term and long-term prognosis of CAP patients (18-22). However, little is known about the association of ALB and RDW in 90-day mortality of sCAP patients. The ALB-RDW score consists of the serum ALB and RDW that can reflect inflammatory conditions. In this study we evaluated the correlation between ALB-RDW score and 90-day mortality of sCAP patients.

Patients admitted to the emergency medical ward and emergency intensive care unit of Renji Hospital, School of Medicine, Shanghai Jiaotong University (Shanghai, China) due to sCAP between January 1, 2014 and June 30, 2019 were retrospectively enrolled in the study. Data of patient characteristics and laboratory data were collected in a web-based electronic medical recording system during hospitalization. Those who were transferred to other hospitals or automatically signed out of the hospital before treatment completed were excluded. Patient information and their medical insurance numbers were maintained encrypted. The study was approved by the Ethics Committee of Renji Hospital [No. 2016-080k(b)].

Normally distributed continuous variables were compared by Student’s t-test and presented as mean ± standard deviation. Nonnormally distributed continuous variables were expressed as median (interquartile range) and compared by Mann-Whitney U test. Categorical variables were expressed as absolute numbers and relative frequencies and compared using the Chi-square test. Forward logistic regression was applied to determine the association between various hematological indices and 90-day mortality, while controlling for potential confounding. ROC curves were constructed to evaluate the prediction ability of ALB-RDW and CURB-65 score in 90-day mortality. All tests were two-tailed and significance was set at 0.05. All statistical procedures were performed with SPSS 22.0.

A total of 179 patients were enrolled in this study. Baseline characteristics including co-morbidity and laboratory data were listed in Table 1. The overall median age was 65 years (53–79 years). The median age of non-survivors was 76 years (62–82 years), which is much higher than 63 years (51–71 years) of survivors (P<0.001). Invasive ventilation and septic shock were more common in the non-survivors (P<0.05). There was no difference in sex smoking and co-morbidity between them. 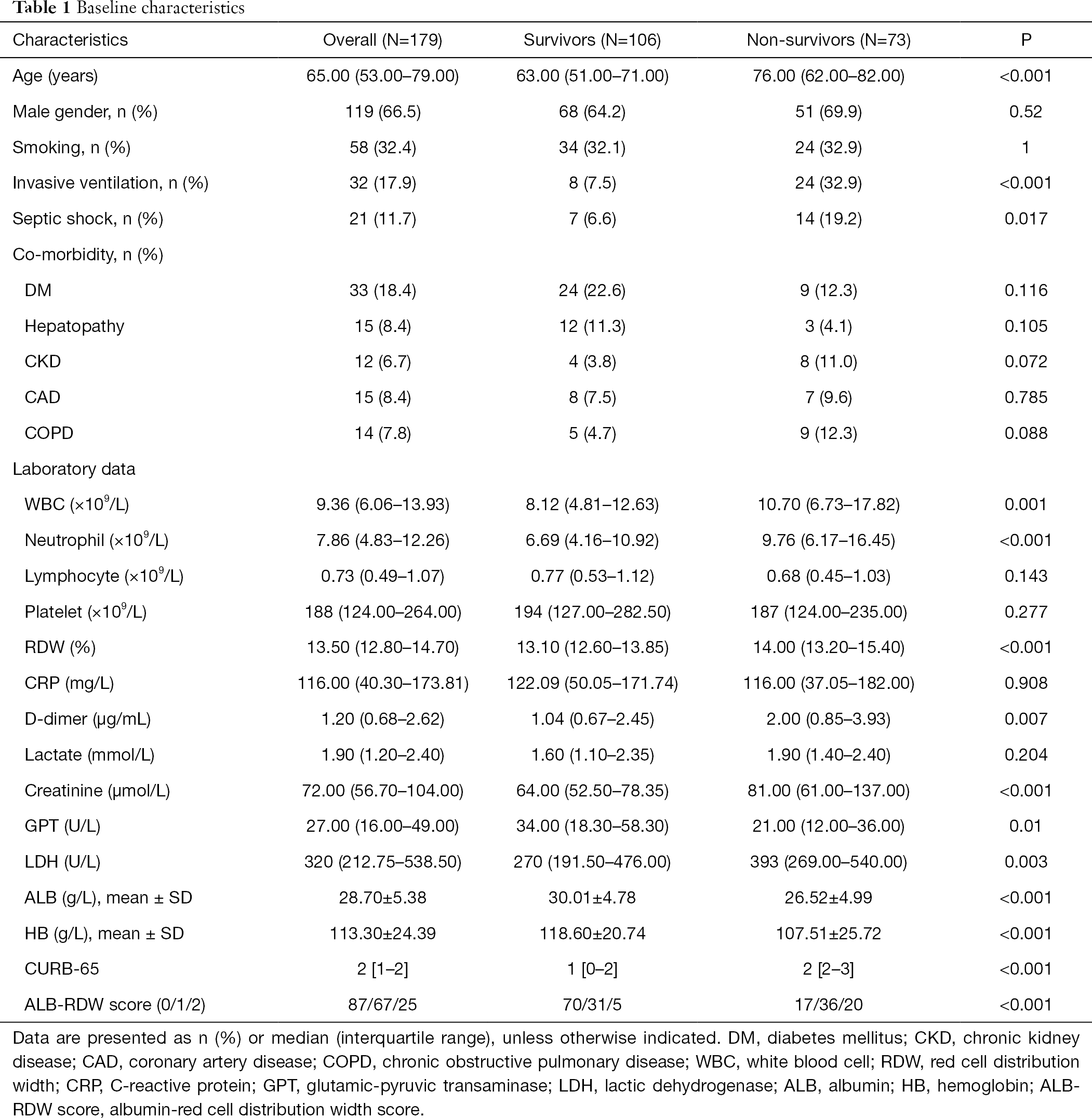 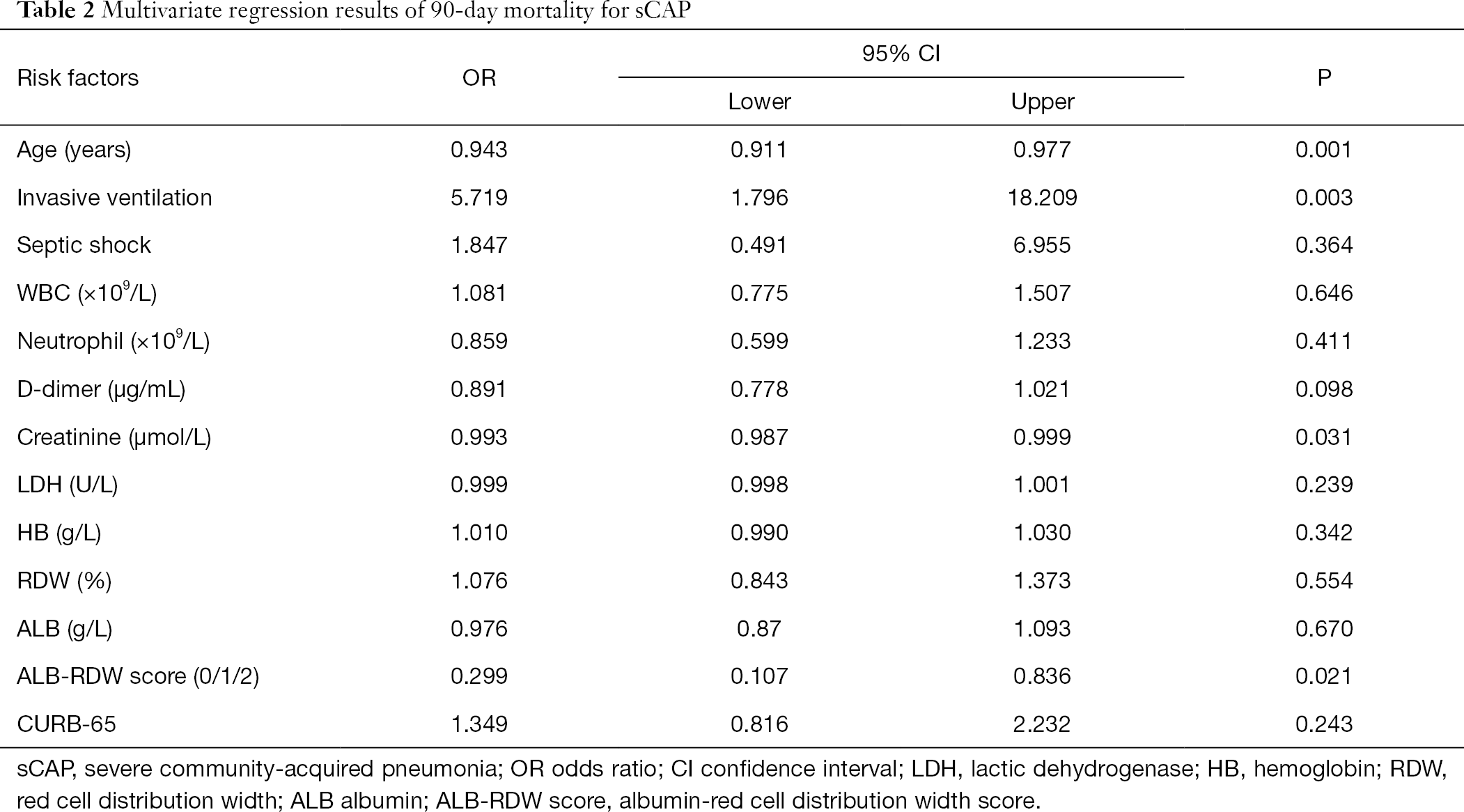 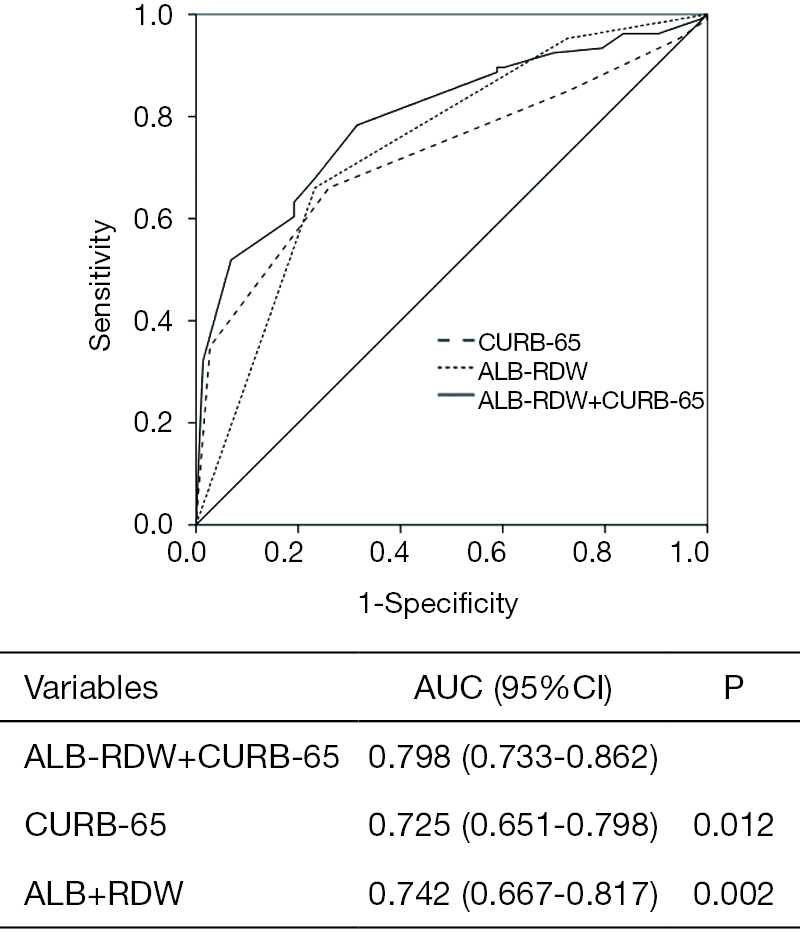 In this study, by analysis of 179 sCAP patients, we found that non-survivors were relatively older. They had higher value in total WBC count, neutrophil count, serum creatinine, lactic dehydrogenase, RDW, D-dimer, and they had lower level of ALB and hemoglobin. While the survivors had lower invasive ventilation, septic shock, CURB-65 score and ALB-RDW score. Multivariate analysis showed that high age, serum creatinine, invasive ventilation and ALB-RDW score were independently associated with 90-day mortality in hospitalized sCAP patients. In addition, we demonstrated that ALB-RDW combined with CURB-65 were strongly associated with 90-day mortality, the association was stronger than CURB-65 alone or ALB-RDW alone.

ALB is a medium size molecule that is synthesized in the liver, it plays an important role in inflammatory response and oxidative stress. It has been showed that ALB is a prognostic marker and associated with mortality of CAP patients (12-17). A prospective study from 1995 to 2011 in Barcelona showed that hypoalbuminemia (<30 g/L) significantly increased the ability of prediction of CURB-65/PSI scores in CAP patients (12). In 2015, Lee et al. determined that ALB <33 g/L was a risk factor of 30-day mortality of CAP patients especially when combined with PSI (13). In addition, a retrospective study about 797 CAP patients in 2016 suggested that ALB level was a risk factors of 30-day mortality of CAP patients, the correlation was even stronger when combined with CURB-65 or PSI (14). Holter and colleague found that low serum ALB level was an independent risk factor of CAP caused death, the death risk increases by 25% for each 5 g/L decrease in the patients’ serum ALB level (15). A study about 1,834 CAP patients at Kurashili Central Hospital reported that low ALB level was correlated with a worse prognosis (16). Another study (17) revealed that ALB, compared with PSI, was stronger risk factor of 30-day mortality of patients with pneumonia occurring outside hospital. In our study, ALB was selected as one of the scoring criteria and the cutoff value of ALB was 27.75 g/L. However, the mechanisms underlying the hypoalbuminemia and the mortality of CAP are unclear. May be factors that could affect ALB synthesis, distribution, or both of them need to be considered.

RDW is a clinical index that is routinely examined as part of the complete blood count. Many studies have revealed that RDW is a risk factor of mortality in some conditions. In our study, the cutoff value of RDW is 14.75% that is similar to other previous studies. A study of Braun et al. (18) about young hospitalized CAP patients showed that RDW (>14.5%) was an independent risk factor of 90-day mortality. The study by Lee et al. in 2013 showed that RDW (>15.2%) was associated with 30-day mortality and improved the prognostic performance of PSI and CURB-65 (19). In another study of community-acquired pneumonia in elderly people, RDW (>15%) as a prognostic marker was unrelated with WBC count or hemoglobin levels and associated with 90-day mortality (20). Moreover, according to a long-term study in 2015 (21) showed that RDW (>14%) improved the accuracy of PSI and CURB-65 at 2 and 3 years, significantly increasing their ROC curves. A study about adult CAP patients from 2006 to 2012 revealed that high RDW (>15%) was associated with increased risk of 30-day mortality (22). Although it is not known about the mechanisms behind that how RDW is associated with the prognosis of diseases, systemic inflammation and oxidative stress have been suggested to be involved in (27).

ALB-RDW score is based on ALB and RDW that are not one of the values used to calculate the CURB-65. ALB and RDW can be obtained from blood routine examination and easy to be used without any further calculation needed. It does not add any further financial burden to the patients as well. According to our results, ALB-RDW score is associated with the prognosis of sCAP. In addition, when combined with CURB-65 score, the ability of predict the prognosis of sCAP is even stronger.

The present study had some limitations. First, this study was a retrospective study conducted in a single institution and some patients with sCAP were not contained because they admitted in other departments in our hospital or remained in the emergency observation room thus selection bias could not be avoided. Second, our research did not contain other inflammatory markers, such as erythrocyte sedimentation rate (ESR), procalcitonin and so on.

In conclusions, we demonstrated that ALB-RDW score was strongly associated with the prognosis of hospitalized sCAP patients especially when combined with CURB-65.

Conflicts of Interest: All authors have completed the ICMJE uniform disclosure form (available at http://dx.doi.org/10.21037/apm.2020.04.22). The authors have no conflicts of interest to declare.

Ethical Statement: The authors are accountable for all aspects of the work in ensuring that questions related to the accuracy or integrity of any part of the work are appropriately investigated and resolved. The study was approved by the Ethics Committee of Renji Hospital [No.2016-080k(b)].