Lung cancer remains the leading cause of tumor-related deaths worldwide, and non-small cell lung cancer (NSCLC) accounts for approximately 85% of all lung cancer cases (1,2). With the advances in video-assisted thoracoscopic surgery (VATS), surgery has been the major treatment for early-stage NSCLC patients, and the prognosis of these patients has improved to a certain extent (3). However, to date, the tumor-node-metastasis (TNM) stage is still the most common indicator for predicting the survival of NSCLC patients. More valuable and reliable prognostic biomarkers are urgently needed.

Inflammation status has been proven to play a key role in cancer development and long-term clinical outcomes of cancer patients (4-6). As previously reported, there are several inflammation biomarkers that have high prognostic value in NSCLC patients undergoing lung resection, including the neutrophil-lymphocyte ratio (NLR) (7), the platelet-lymphocyte ratio (PLR) (8), the lymphocyte-monocyte ratio (LMR) (9) and C-reactive protein (CRP) (10). On the other hand, nutritional status has also been demonstrated to show a strong linkage with survival after surgery in NSCLC (11,12). Tewari et al. (12) and Nakagawa et al. (13) showed that low body mass index (BMI), which represented impaired nutrition, was significantly associated with worse long-term survival in patients with resected NSCLC. Albumin (ALB) is also a promising indicator for nutritional status, and hypoalbuminemia is correlated with poor prognosis in patients with NSCLC (14). In 2013, Jafri et al. (15) developed a novel prognostic index named the advanced lung cancer inflammation index (ALI) and evaluated its value for prognosis in patients with metastatic NSCLC. The ALI consists of BMI, ALB and NLR, which incorporate both inflammatory and nutritional factors. Subsequently, its usefulness has been reported in malignant lymphoma (16), esophageal carcinoma (17), small cell lung cancer (SCLC) (18) and NSCLC (19). However, no study has focused on early-stage NSCLC patients who undergo VATS pulmonary operation as the only treatment.

Therefore, the aim of this study was to explore the prognostic value of preoperative ALI in patients who were diagnosed with limited-stage NSCLC and received only VATS pulmonary resection (either lobectomy or segmentectomy).

This was a retrospective single-center study.

Patients with NSCLC who underwent VATS pulmonary surgery from January 2014 to June 2016 in the Department of Thoracic Surgery, West China Hospital, Sichuan University, were reviewed retrospectively. The inclusion criteria were as follows: (I) pathologically diagnosed with NSCLC in TNM stage I or II; (II) VATS pulmonary resection with lymph node dissection was the only treatment; (III) available preoperative BMI, serum ALB and NLR values; (IV) adequate clinicopathologic and follow-up data; (V) no acute or chronic inflammatory diseases preoperatively, such as active infection or rheumatoid arthritis; (VI) normal liver function; and (VII) no second malignancies or recurrent NSCLC. Patients were excluded according to the exclusion criteria: (I) received neoadjuvant, postoperative adjuvant or immunological therapies; (II) intraoperative conversion to thoracotomy; or (III) concomitant hepatic or inflammatory diseases.

All preoperative clinicopathological data were extracted from the medical records of our hospital. They included age, gender, BMI, smoking history, preoperative comorbidity, lung function, tumor location, size, pathology, type of resection, TNM stage, serum ALB, NLR and platelet-lymphocyte ratio (PLR) levels. BMI was calculated as weight in kilograms divided by height in square meters. NLR and PLR were defined as a simple ratio between the neutrophil and lymphocyte counts and a simple ratio between the platelet and lymphocyte counts, respectively. The ALI was calculated as BMI × ALB/NLR.

The thresholds for BMI, ALB, NLR and ALI were determined by receiver operating characteristic (ROC) curve analyses for the prediction of death from any cause. The thresholds for other continuous variables were determined using their median values. The chi-square test or Fisher’s exact test was performed to compare differences between ALI groups. Univariate and multivariate analyses were conducted using the Cox proportional hazard model to identify independent predictors for OS and DFS, and all variables with a P value <0.10 in the univariate analysis were included in the multivariate analysis. Survival curves were calculated by the Kaplan-Meier method, and differences between groups were analyzed by the log-rank test. All analyses were performed using the IBM SPSS statistics software program, version 22.0. A P value <0.05 was considered statistically significant.

Characteristics of the study population

A total of 292 patients were included in the current research. The baseline clinicopathological characteristics of these patients are summarized in Table 1. The median age, BMI and tumor size were 62 years (range, 18–81 years), 23.48 kg/m2 (15.62–32.27 kg/m2) and 2.4 cm (0.5–5.0 cm), respectively. Of all cases, 158 patients were male, 134 patients were current or ex-smokers, 39 patients had chronic obstructive pulmonary disease, 44 patients had emphysema, 100 cases were located on the left, 197 cases were adenocarcinoma (AC), 204 patients received lobectomy and 197 patients were in TNM stage I. 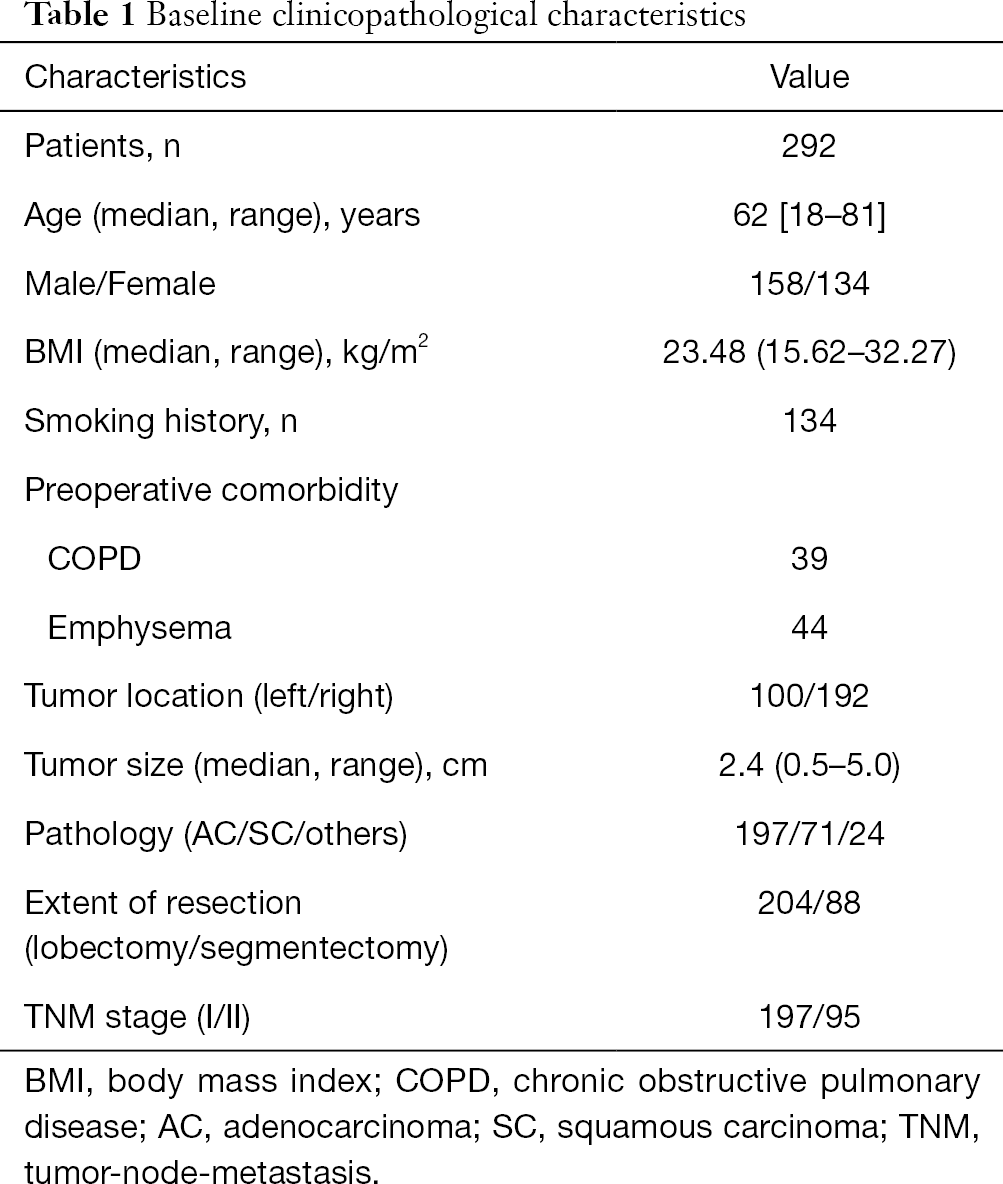 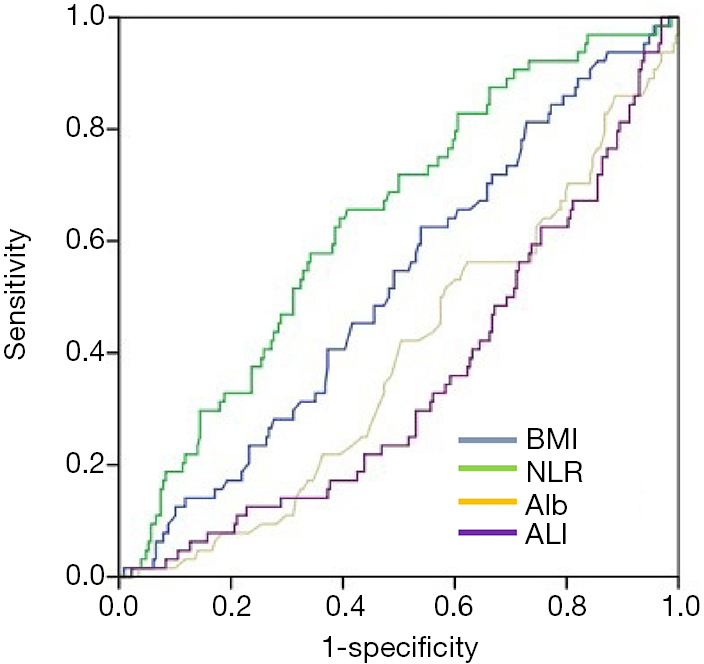 Association between ALI and patient characteristics 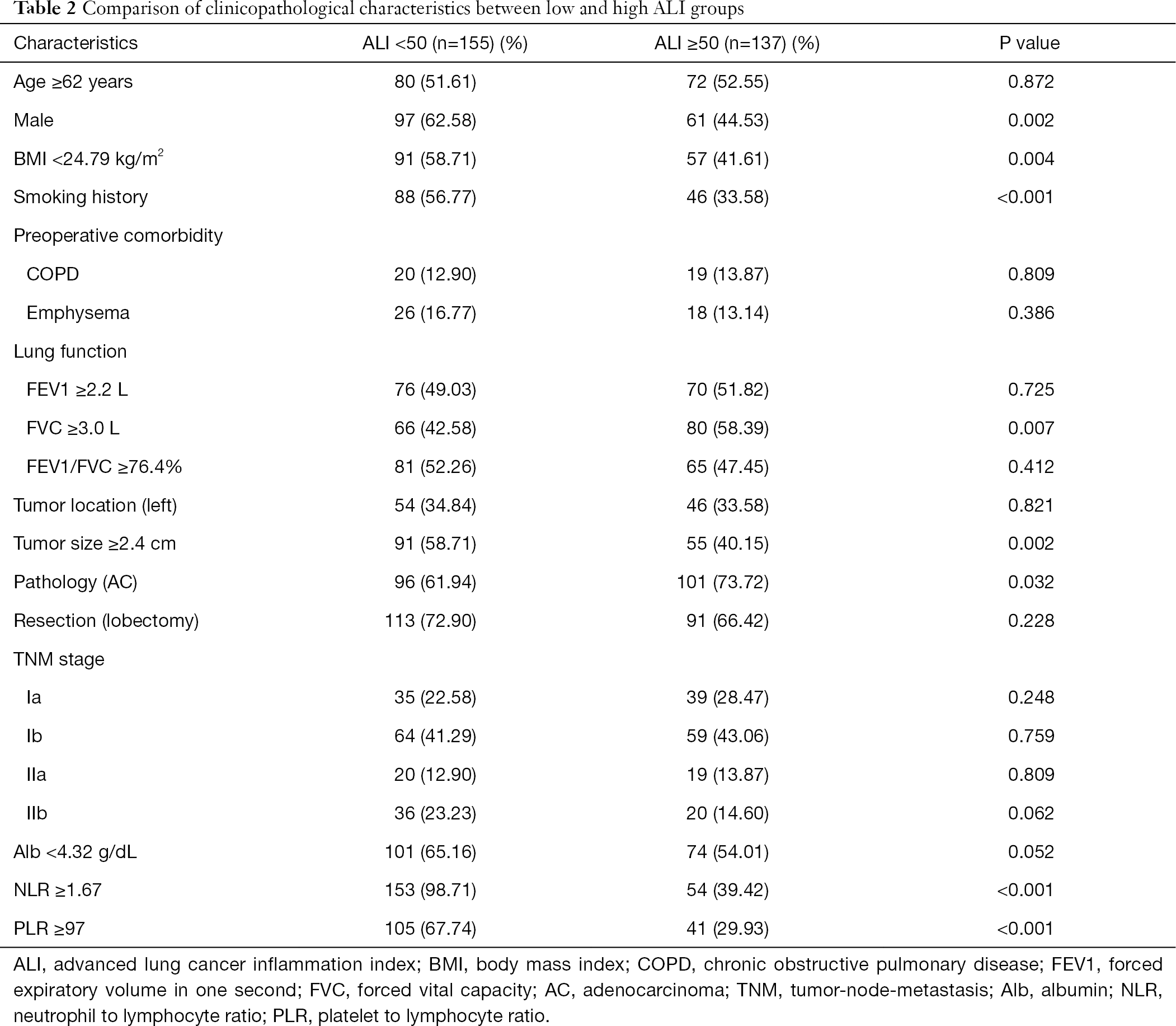 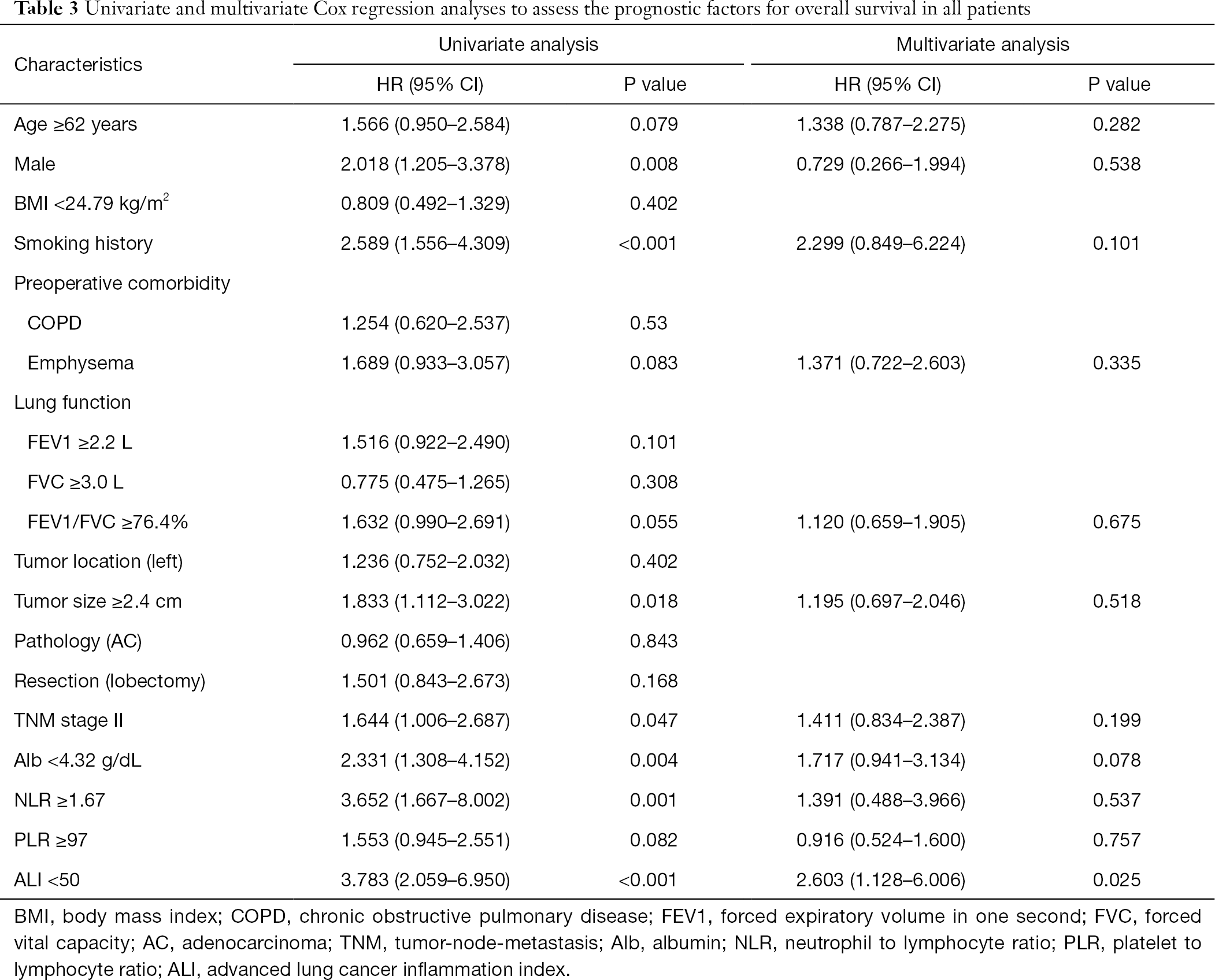 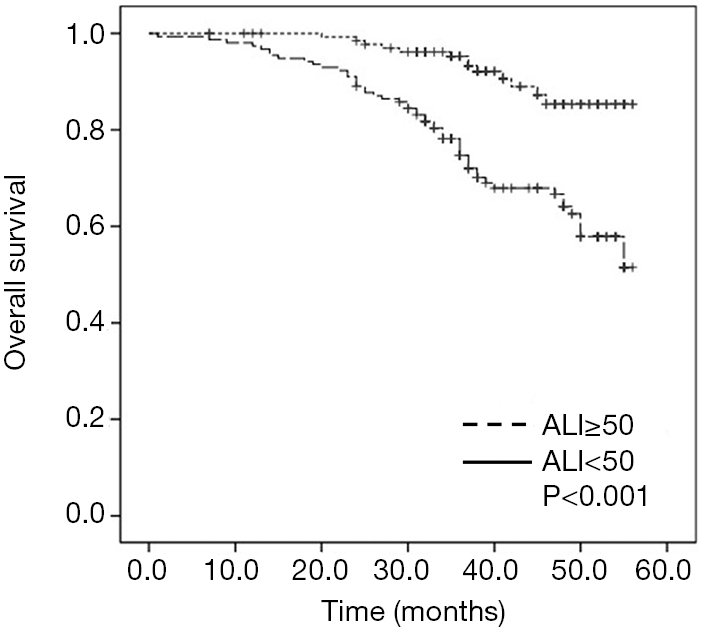 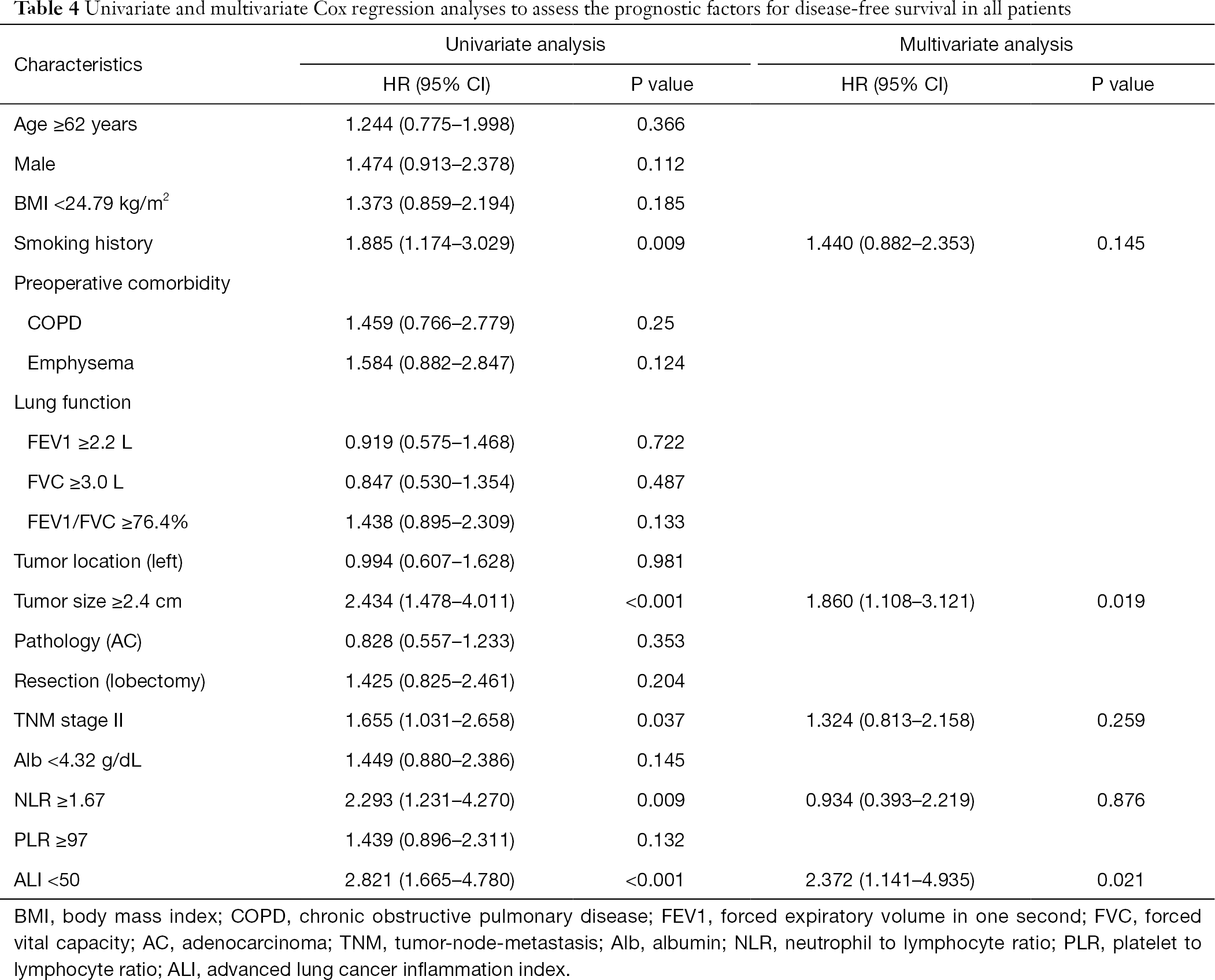 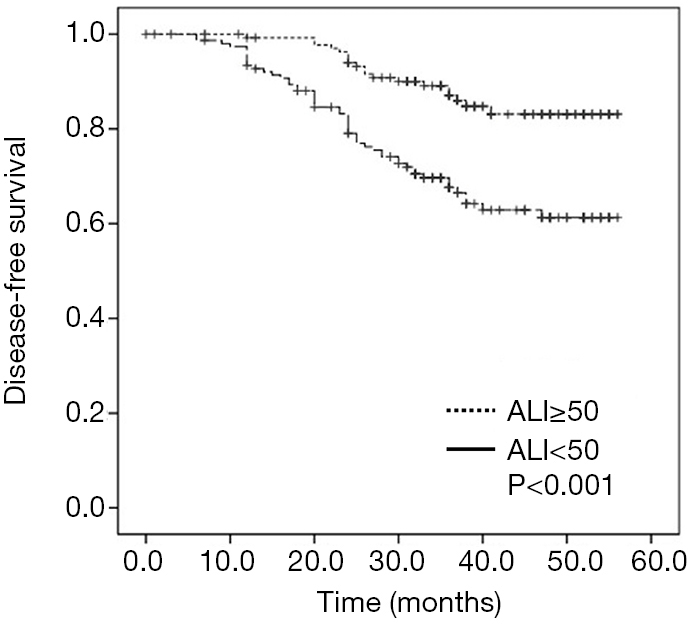 Nutrition and inflammation status are well known to be correlated with the prognosis of malignancies (4-6,11,12). BMI and ALB level are valuable parameters for the evaluation of nutritional status. A decreased muscle and fat burden caused by cancer progression results in body weight loss and a higher risk of mortality (20). Although the detailed mechanism remains unclear, malnutrition may cause the deterioration of the immune system (19). However, the utility of BMI is usually limited due to its inaccurate representation of body compositions, and body weight loss is indistinct in patients with pleural effusion or body edema. Furthermore, the concentration of ALB can be affected by many factors, such as illness, dehydration and fluid retention (21,22), which greatly restricts its utility in clinical practice.

Previous studies have demonstrated that lymphocytes play a crucial role in killing tumor cells and regulating apoptosis, angiogenesis, proliferation and metastasis of tumors by secreting cytokines (11,23). On the other hand, neutrophils can inhibit lymphocyte-mediated immune activity consisting of activated T cells and natural killer T cells by producing cytokines (18,24). A meta-analysis including 7,219 patients reported that an elevated NLR was a negative predictor of survival in patients with lung cancer (25).

Nevertheless, a single marker or ratio often fails to assess the prognosis of patients precisely. In 2003, Forrest et al. (26) proposed the Glasgow prognostic score (GPS), which combined CRP and ALB levels, and a number of studies have reported its prognostic value in several cancers (26-30). Subsequently, McMillan et al. (31) proposed the modified Glasgow prognostic score (mGPS), which was more sensitive than the GPS, and a meta-analysis involving 5,817 patients revealed that it was a good predictor for the survival of lung cancer patients (32). Thus, a combination of multiple indexes may perform better than single biomarkers in predicting prognosis in patients with lung cancer. In 2013, Jafri et al. (15) described a novel index called the ALI, and several studies have proven its high prognostic value in patients with NSCLC (18,19). However, none of them focused on early-stage patients who received VATS pulmonary resection as the only treatment. Therefore, we conducted this research to explore the association between preoperative ALI and prognosis in this population.

Compared with previous relevant studies, our research has several advantages or highlights. Only early stage (TNM I–II) patients were enrolled in the analysis. In addition, all of the included patients received the VATS pulmonary operation as their only treatment; as chemoradiotherapy and immunotherapy can significantly affect the inflammatory immune status, this significantly reduced the bias caused by therapy methods. Patients with hepatic diseases were excluded because ALB is produced by the liver and abnormal liver function may cause a decreased ALB level. No significant difference in the proportion of patients at different disease stages was observed between the high and low ALI groups; to some extent, this may indicate that the TNM stage had no effect on the prognostic role of ALI in our study. In addition, the endpoint outcomes in our research included OS and DFS, while most previous studies only reported OS. The cut-off value for the ALI was 50 in our study, which is much higher than the thresholds reported in previous studies including all-stage patients; meanwhile, compared with these previous studies, the median values of the ALB level and NLR of our study were significantly higher and lower, respectively. This indicates that the optimal critical value of ALI should be different for patients with different stages and that limited stage patients may have a relatively higher ALI threshold.

There are still some limitations that should be addressed. First, this was a retrospective single-center study with a small sample size. Second, there were some significant differences in the clinicopathological characteristics between the high and low ALI groups, and the influence of these factors on survival and the prognostic role of the ALI should not be ignored. Third, as mentioned above, the critical value of the ALI that maximized the Youden index in our study was 50; whether 50 is the optimal cutoff point still needs be tested in future studies. Fourth, the ALI lacks tumor specificity and does not include other important biomarkers, such as CRP, platelet-lymphocyte ratio (PLR), lymphocyte-monocyte ratio (LMR), etc.

In conclusion, our research demonstrated that the preoperative ALI may serve as a promising prognostic index in early-stage NSCLC patients who receive only pulmonary resection by VATS. More well-designed multicenter studies with larger samples are needed to verify our findings.

Conflicts of Interest: All authors have completed the ICMJE uniform disclosure form (available at http://dx.doi.org/10.21037/apm.2020.03.18). The authors have no conflicts of interest to declare.

Ethical Statement: The authors are accountable for all aspects of the work in ensuring that questions related to the accuracy or integrity of any part of the work are appropriately investigated and resolved. All procedures performed in studies involving human participants were in accordance with the ethical standards of the Ethics Committee of West China Hospital, Sichuan University, the national research committee and the 1964 Helsinki Declaration and its later amendments or comparable ethical standards. The study was approved by the regional committee of Sichuan University West China Hospital (ID: 2018-571). Written informed consent for the use and storage of information from the hospital database was obtained from each patient.