Clinical trials that had been published up to June 2019 were used for this study, and were obtained after a comprehensive literature search on Embase, PubMed, the Clinicaltrials.gov (http://clinicaltrials.gov/), and the Cochrane Library databases. The search terms included “educational video”, “video”, “colonoscopy”, “education”, and “colorectal cancer”, and only studies that compared the educational video and conventional education methods were selected for this work. Further, we screened the reference lists of review articles and retrieved additional studies from relevant journals through manual search. We exclusively included studies which were published in English.

Studies were selected according to the Preferred Reporting Items for Systematic Reviews and Meta-Analyses (PRISMA) statement (15). Clinical trials that met the following criteria were included:

Literature screening, data extraction, and quality assessment of the studies were independently conducted by two reviewers. However, upon disagreements between them, a third reviewer adjudicated until consensus was reached. The extracted information from each article included first author’s name, year of publication, trials type, country, the number of patients, patients’ age, body mass index (BMI), previous experience of colonoscopy, and the outcomes. Moreover, the quality of the methodology in randomized controlled trials (RCTs) was assessed using the Jadad criteria (16), and the quality of each trial was graded as either high-quality (score ≥3) or low-quality trials (score ≤2).

Data of patients with outcomes were extracted from all of the included trials. SMD, RR and 95% CI were then calculated to assess the association between each regimen and its respective outcome. Further, the Q statistic and I2 statistic were used to assess the heterogeneity, with I2>50% signifying statistical significance. The random-effect model was also used in the meta-analyses for conservative statistics, and besides Begg adjusted rank correlation test and Egger regression tests, a funnel plot used for assessing the publication bias (17,18). In addition, to determine the robustness of the meta-analysis results, we performed a sensitivity analysis test. Statistical significance was set at P<0.05, and STATA statistical version 12.0 was used to perform all the statistical analyses (Stata Corporation, College Station, Texas, USA). All P values were two-sided.

Characteristics of studies included in this study

Our search yielded a total of 2,148 potentially relevant clinical trials that used either educational video or conventional education methods on patients who underwent colonoscopy. After further review and screening, eight RCTs comprising of 1,977 subjects met the inclusion criteria (6,19-25) and were pooled for the meta-analyses (Figure 1). The baseline characteristics of each trial are shown in Table 1. All trials included were single-blinded and the number of enrolled patients ranged from 92 to 502 for each trial. In addition, the quality of the included RCTs (Jadad scores) ranged between 2 and 3. According to the eligibility criteria of the majority of the trials, patients with impaired hepatic, renal or bone marrow function were excluded and most of the patients had Eastern Cooperative Oncology Group (ECOG) performance-status scores of 0 or 1. In this systematic review, we followed the guidelines of the PRISMA statement. 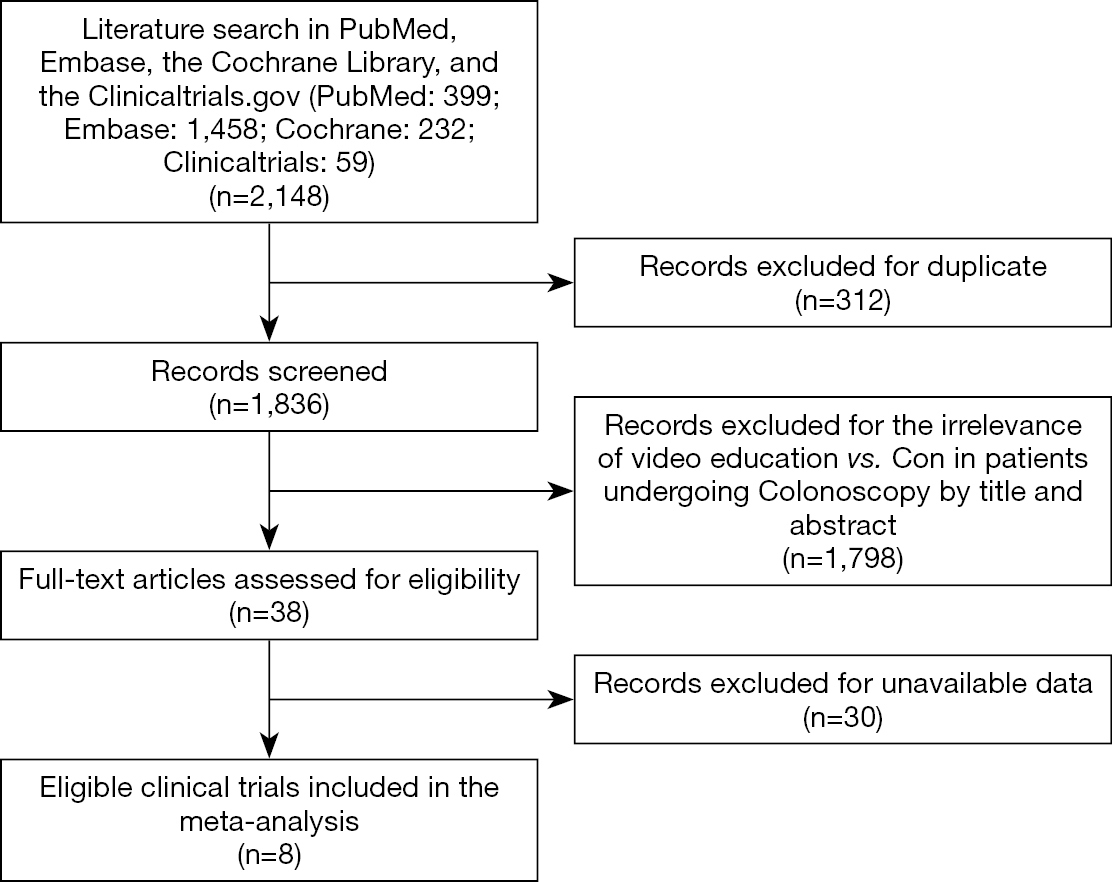 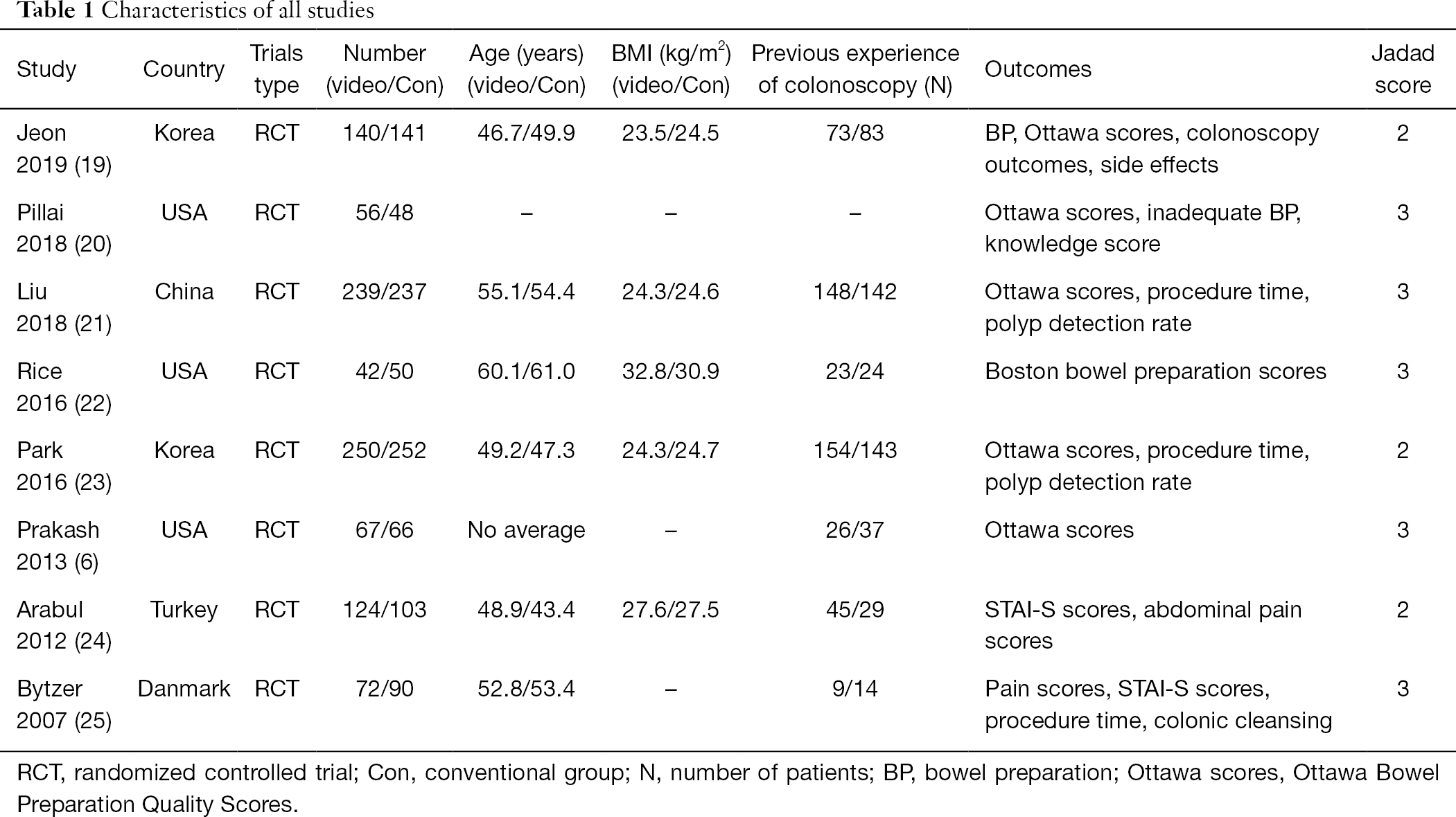 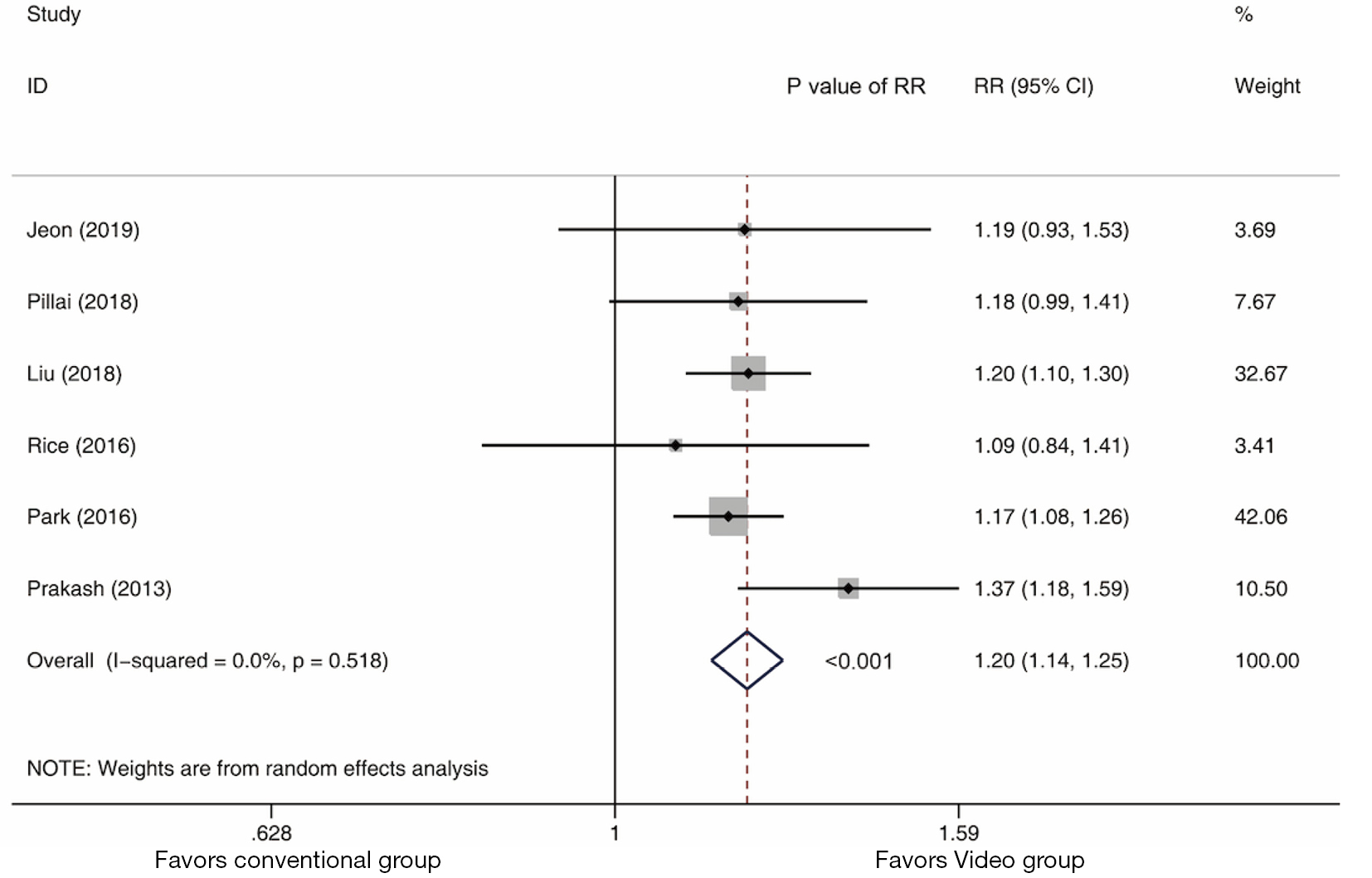 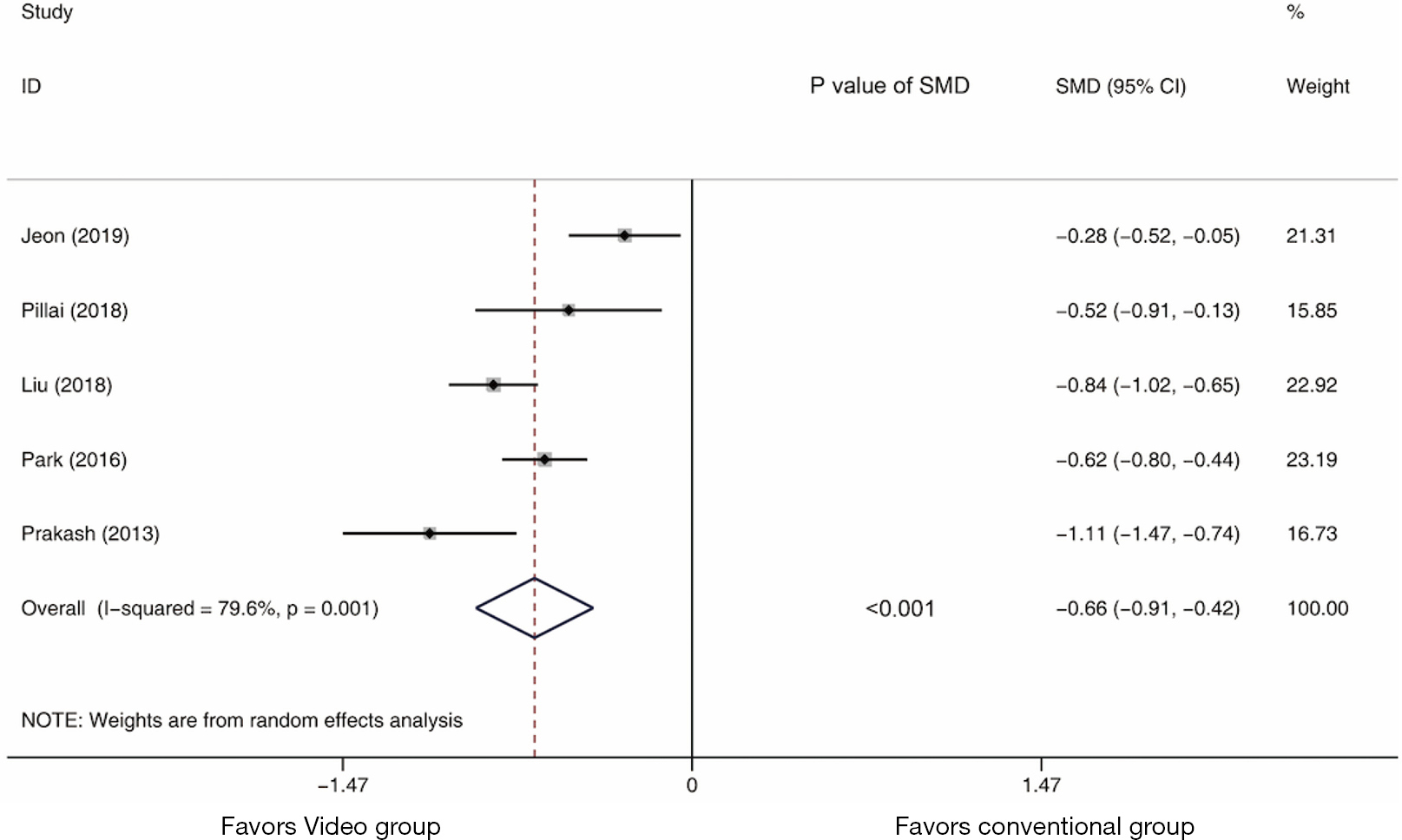 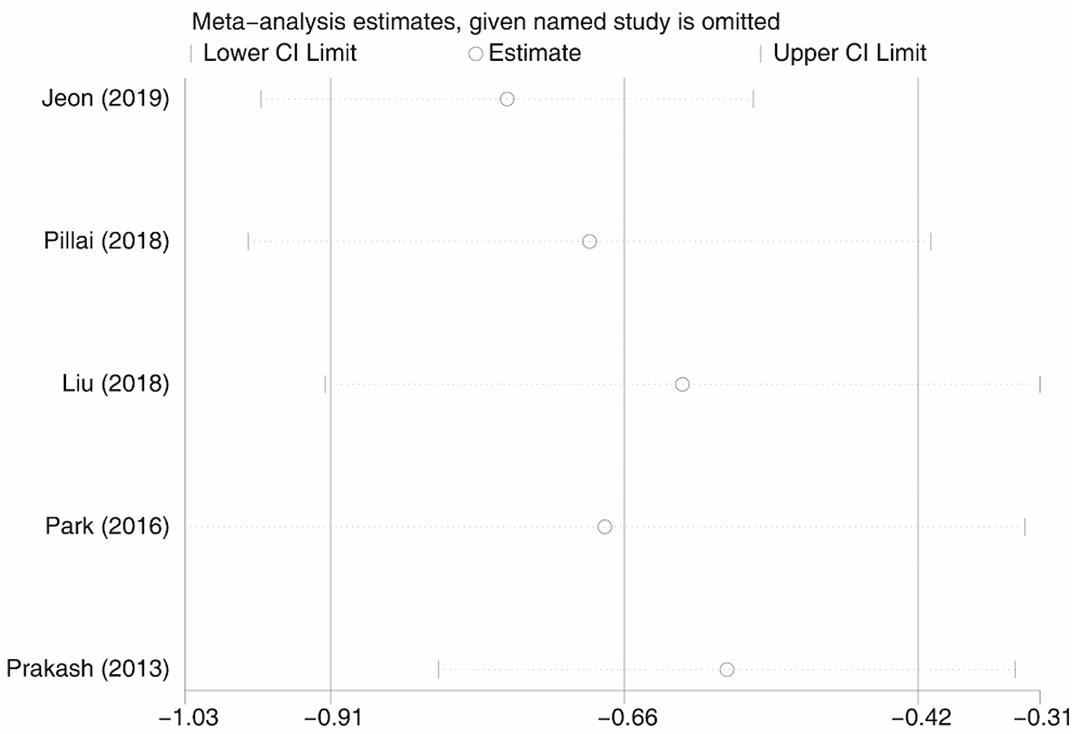 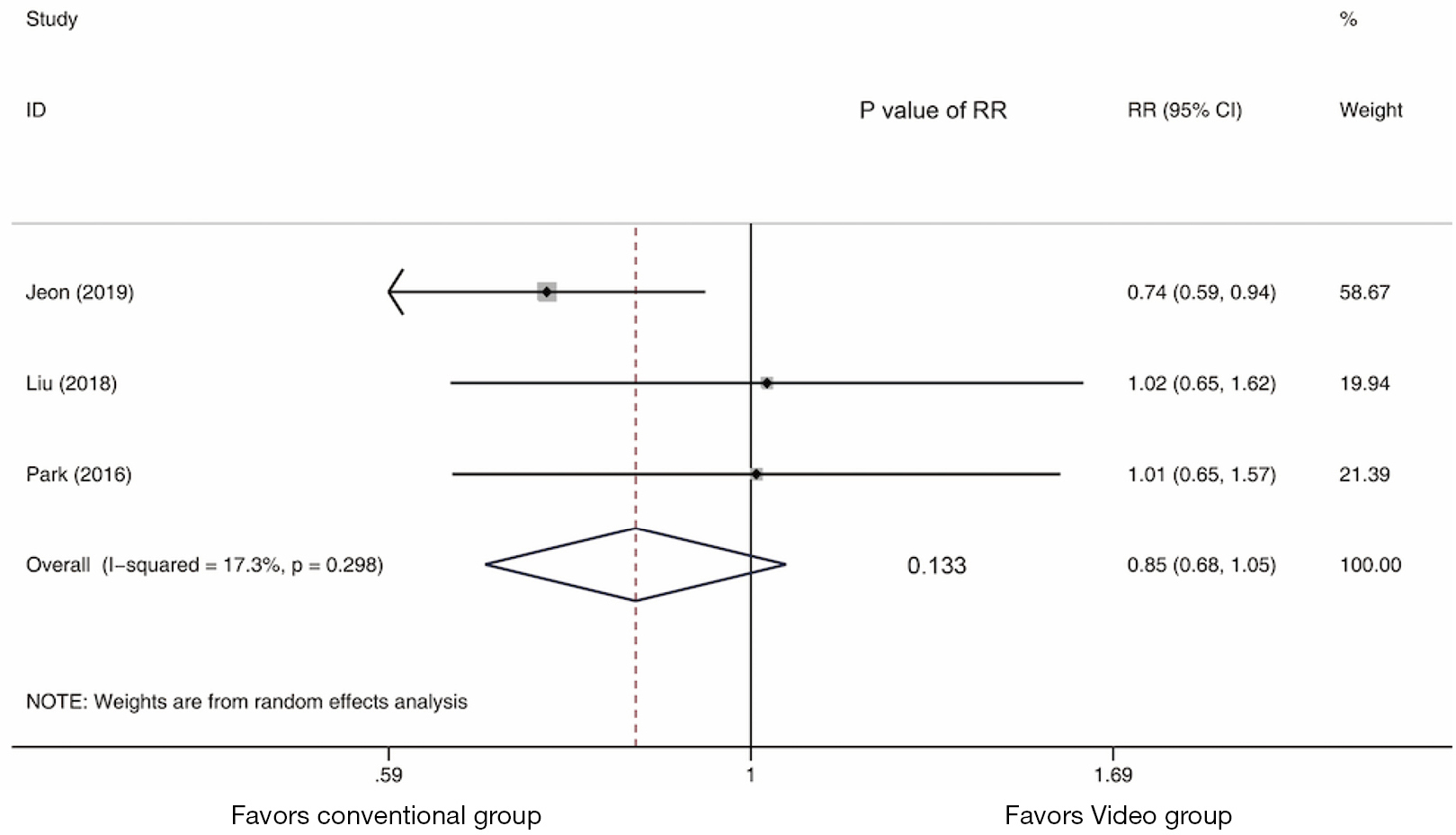 Figure 4 Annotated forest plot for meta-analysis of polyp detection outcomes of the educational video and conventional groups. Summary of polyp detection outcomes (RR) between the educational video and conventional groups were calculated using the random effect model. Size of squares is directly proportional to the amount of information available. RR, risk ratio; P, P value of the Q test for heterogeneity. 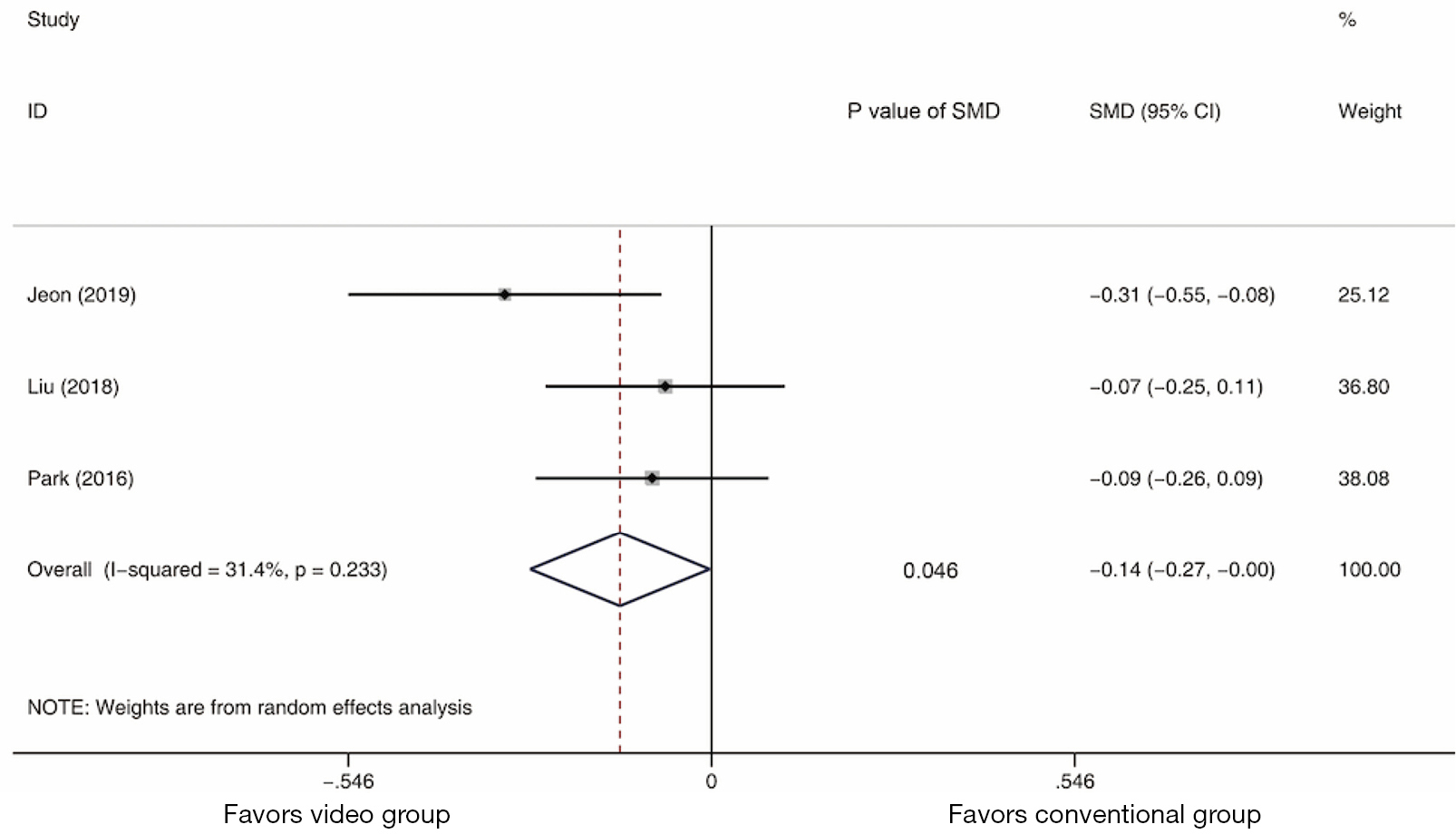 Figure 5 Annotated forest plot for meta-analysis of withdraw time outcomes of the educational video and conventional groups. Summary of withdraw time outcomes (SMD) between the educational video and conventional groups were calculated using the random effect model. Size of squares is directly proportional to the amount of information available. SMD, standard mean difference; P, P value of the Q test for heterogeneity.

There was no significant publication bias (P=0.803 for the Egger’s test; P=1.000 for the Begg’s test) revealed in this study (Figure S2). Furthermore, the funnel plot’s shape did not display any evidence of asymmetry. 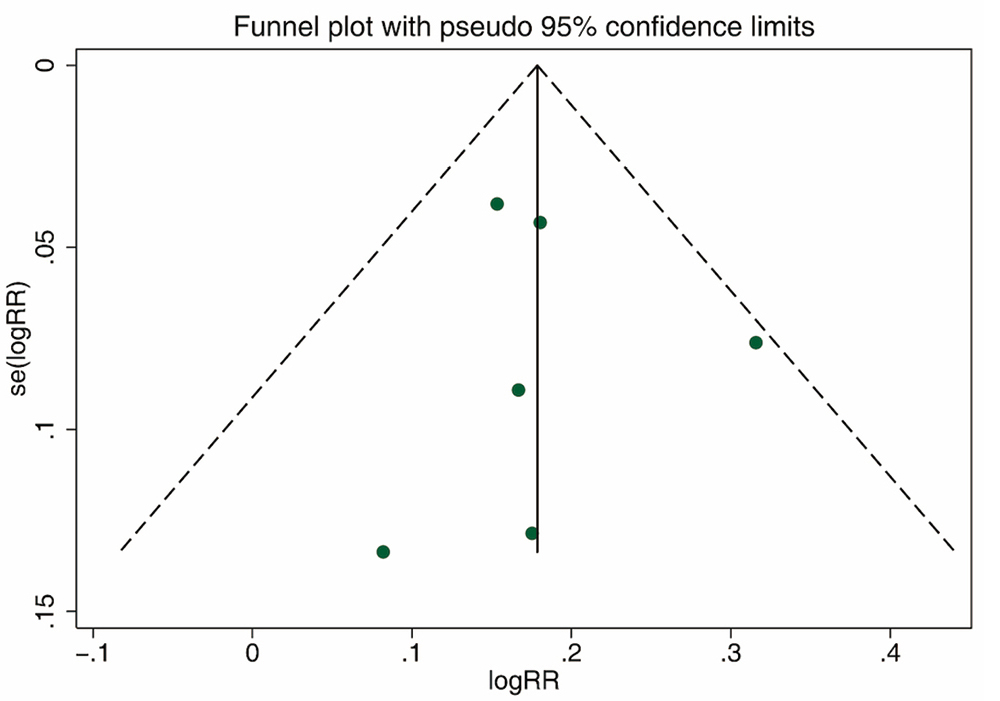 Globally, CRC ranks second and third among the most commonly diagnosed cancers in females and males, respectively. However, CRC screening can reduce the mortality of CRC, with colonoscopy considered as the golden standard test for screening CRC (3). Adequate bowel preparation is necessary for enhancing clear observation of the mucosal surface during the colonoscopy procedure. Besides, studies have shown that inadequate bowel preparation occurs in up to 25% of colonoscopy procedures (4,26). The conventional issuance of instructional leaflets to patients to improve the quality of bowel preparation has yielded unsatisfactory results. Therefore, the alternative use of educational video has been proposed by other studies to be a highly attractive strategy because it is acceptable to most of the patients, including the illiterate ones (14). Mixed results have been reported from different studies regarding the beneficial impact of educational video on colonoscopy, with some studies affirming its benefits while others showing no significant difference with other conventional education methods. Thus far, the results from clinical trials are not compelling enough to draw any definitive conclusions about the superiority of the educational video in colonoscopy. Herein, we performed a systematic review and meta-analysis on the efficacy of the educational video and conventional care for patients undergoing colonoscopy. The study was based on eight RCTs which comprised of 1,977 patients. From the results, we observed that: (I) The educational video group had significantly higher incidence of adequate bowel preparation, and lower total Ottawa scores than the conventional group. (II) There was no statistical difference in polyp detection and withdraw time between the educational video and conventional groups.

Proper bowel preparation is a key process that precedes colonoscopy, since besides providing a good view of the entire colonic mucosa, it improves the safety of the whole examination procedures (27). Conversely, improper bowel preparation increases the time of examination and incidences of complications (28). From our pooled meta-analysis results, we observed that the educational video could significantly enhance bowel preparation, which could further improve the quality of colonoscopy. Furthermore, Ottawa score is also an important criterion which represents the quality of bowel preparation, with the scores ranging from 0 (perfect) to 14 (inadequate) (29). The pooled results of meta-analysis revealed that the educational video had significantly lower total Ottawa scores than the control group, which was consistent with the results of proper bowel preparation.

Further, the meta-analysis results also exhibited no statistical difference in withdraw time between the educational video and conventional groups. Since colonoscopy entails careful observation of the colonic mucosa, studies have reported that withdraw time of above 6 minutes can significantly increase the adenoma detection rate (30). However, our meta-analysis results showed that the educational video was not associated with withdraw time of colonoscopy. These results were consistent with the previous results of polyp detection rate.

Despite the use of sedation, colonoscopy is not well tolerated by many patients since it is accompanied by pain and anxiety. Spielberger State-Trait Anxiety Inventory-State (STAI-S) score is widely used to assess the state of anxiety. In our review, one RCT concluded that the educational video group had significantly lower pain scores and STAI-S scores than the control group (P<0.001 and P=0.001, respectively) (data list in Table 2) (24). Conversely, another RCT reported that the educational video did not affect the pain and anxiety state of patients undergoing colonoscopy (P>0.05) (25). However, since we lacked enough trials that assessed pain and STAI-S scores between these two groups, we could not draw any definite conclusion.

Since heterogeneity is an important factor in meta-analysis studies, we performed sensitivity analysis which revealed that no study affected the overall significance of the pooled estimates, hence our findings were robust. Publication bias might introduce false positives in the meta-analysis (18). To avoid the possible bias, the studies included were all properly assessed. To detect publication bias, known for introducing false positives in meta-analysis, Begg’s and Egger’s tests were used. However, we did not find any evidence of bias. Moreover, these results of publication bias and sensitivity analysis confirmed the credibility of our findings.

This present meta-analysis had its limitations and should therefore be interpreted with caution. First, we used few studies, especially due to the lack of sufficient high-quality RCTs. Second, the educational video protocols used in the included RCTs were inconsistent, hence additional rigorously designed experiments are required. Finally, there were insufficient RCTs to compare the adenoma detection rate, pain scores and STAI-S scores between the educational video and conventional groups.

In conclusion, compared with the conventional group, we observed that the educational video group had a higher incidence of adequate bowel preparation, lower total Ottawa scores but similar polyp detection rate and withdraw time. These findings consistently showed that the educational video can improve bowel preparation in patients undergoing colonoscopy.

We thank all our collaborators who helped with this study.

Ethical Statement: The authors are accountable for aspects of the work in ensuring that questions related to the accuracy or integrity of any part of the work are appropriately investigated and resolved.