Moxibustion for the treatment of ankylosing spondylitis: a systematic review and meta-analysis

Ankylosing spondylitis (AS) is a chronic autoimmune inflammatory disorder with joint damage primarily to the joints of spine and the sacroiliac, leading to progressive bone fusion of the spine (1). Nonsteroidal anti-inflammatory agents (NSAIDs), disease modifying antirheumatic drugs (DMARDs), glucocorticoid as well as biologic drugs are recommended as the principle treatments for AS patients (2). However, prolonged therapies with drugs such as NSAIDs may have potential cardiovascular, gastrointestinal and renal risks (3). Therefore, substitution and complementary therapies have been actively searched to improve the treatment strategy for AS patients.

Moxibustion is one of the complementary and alternative therapies frequently used by patients with rheumatic diseases worldwide, especially in East Asian countries such as China. It is a form of heat therapy in which dried plant materials called “moxa” are burned on or near the surface of the skin. Several systematic review and meta-analyses have shown that moxibustion is effective in relieving rheumatic diseases such as rheumatoid arthritis and knee osteoarthritis (4,5). To date, there has been no critically designed systematic review assessing the efficacy and safety of moxibustion for the treatment of AS. A meta-analysis published in 2011 evaluated the effectiveness of moxibustion for major rheumatic conditions, however, only three trials related with AS were included (6). Therefore, in the present study, we performed a systematic review and meta-analysis of randomized controlled trials (RCTs) to assess the efficacy of moxibustion in the treatment of AS patients.

This systematic review and meta-analysis were conducted adhering to the Preferred Reporting Items for Systematic Reviews and Meta-analysis (PRISMA) Statement. The protocol of the present study was registered and approved by PROSPERO under the registration number of CRD42019104815. Briefly, seven databases including PubMed, Cochrane Library, EMBASE, China National Knowledge Infrastructure (CNKI), Wanfang, VIP Database for Chinese Technical Periodicals and China Biology Medicine (CBM) were systematically searched from databases inception through December 31, 2018. No restrictions were applied on language, year of publication or publication status. References of related articles were manually searched for potential eligible studies for inclusion.

Studies were considered eligible for inclusion based on the following criteria: (I) randomized controlled trials; (II) participants are those diagnosed with AS; (III) studies comparing moxibustion alone or moxibustion combined with Western medicine (Wm) to Wm alone for the treatment of AS patients. The exclusion criteria were: (I) observational or retrospective studies; (II) duplicated studies; (III) the control group was not treated with Wm alone; (IV) the experimental group used additional treatments (such as acupuncture, herbal therapy or rehabilitation).

Eligible studies were selected for detailed analysis and data extraction, which were performed by two investigators (JJ Hu and YY Mao). Disagreements were resolved through consensus. The following data were extracted from each study, which included first author, publication year, sample size, patient demographics, intervention measures in the experimental and control groups, outcome measurements and adverse events documented.

Assessment of risk of bias

We evaluated the quality of each study by using the Cochrane Risk of Bias tool (7), which consists of the following six items: (I) was the allocation sequence adequately generated? (II) was the allocation adequately concealed? (III) was knowledge of the allocated intervention(s) adequately presented during the study? (IV) were incomplete outcome data adequately addressed? (V) are reports of the study free of any suggestion of selective outcome reporting? (VI) was the study apparently free of other problems that could place it at risk of bias? Each item was classified into high (H), low (L), or unclear (U) risk of bias, respectively.

Statistical analyses were performed using Stata version 12.0 (Stata Corp LP, College Station, TX, USA). We used Cochrane’s Q test and I2 statistics to assess the magnitude of heterogeneity between studies (8,9). For dichotomous variables, odds ratios (OR) and 95% confidence intervals (CIs) were used, while for continuous variables, weighed-median difference (WMD) and 95% CIs were used. These effect estimates were combined using fixed-effects (I2<50%) or random-effects models (I2≥50%) (10). Funnel plot was generated and publication bias was assessed using Egger’s test. The trim-and-fill computation was used to estimate the effect of publication bias on the interpretation of the results when publication bias existed. Stratification analyses were further performed based on the treatment plan of experimental groups. P values of <0.05 were considered statistically significant.

A flow chart of study inclusion and exclusion is shown in Figure S1. The initial screening yielded 1,176 articles, among which 26 studies (with data for 1,944 participants) were finally included. The included studies were published between 2002 and 2018 and originated in China. The median trial duration was 8 weeks. The sample size of included trials ranged from 24 to 220 participants. All the included trials used pure Wm as the control group. Eight trials used pure moxibustion in the experimental group (11-18), while 18 trials used moxibustion combined with Wm (19-36). The detailed information of the included studies is summarized in Table 1. 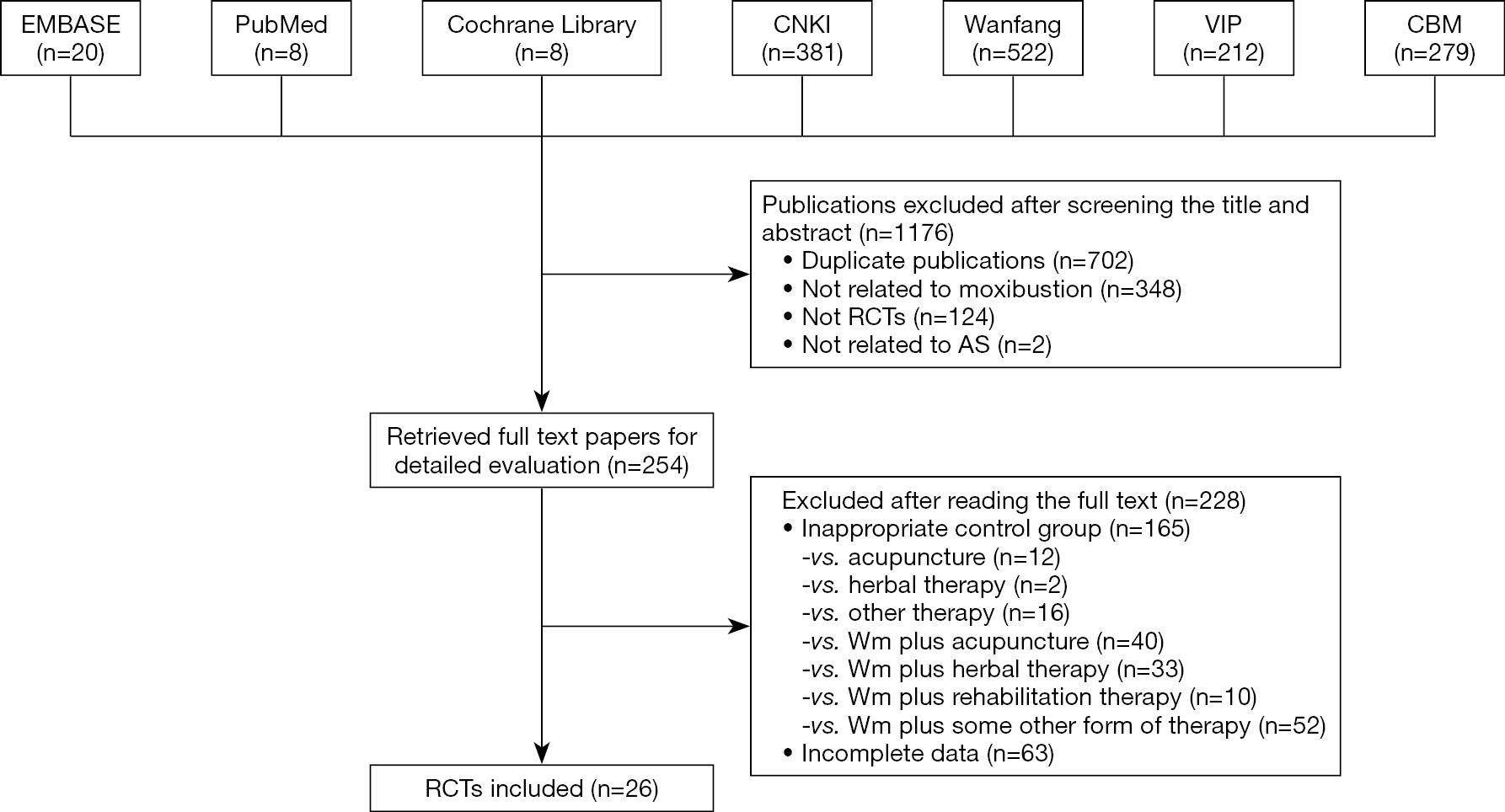 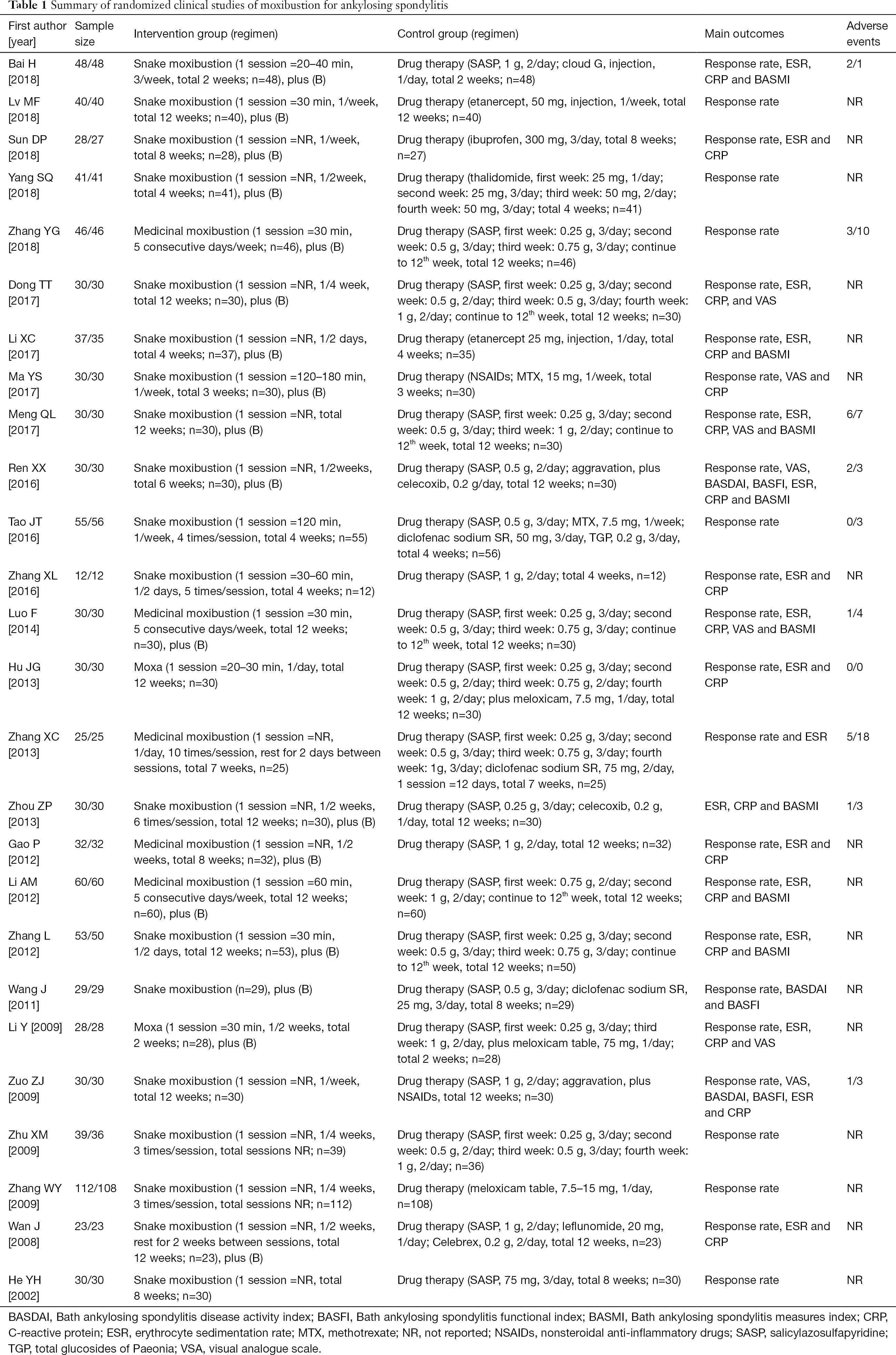 Twelve of the included trials reported appropriate sequence generation methods for the randomization process, while 14 trials were described as ‘randomized’. None reported blinding because the blinding of participants and personnel was impossible to carry out in these studies. Almost every trial had high risk of bias according to the Cochrane risk of bias criteria (Table S1). 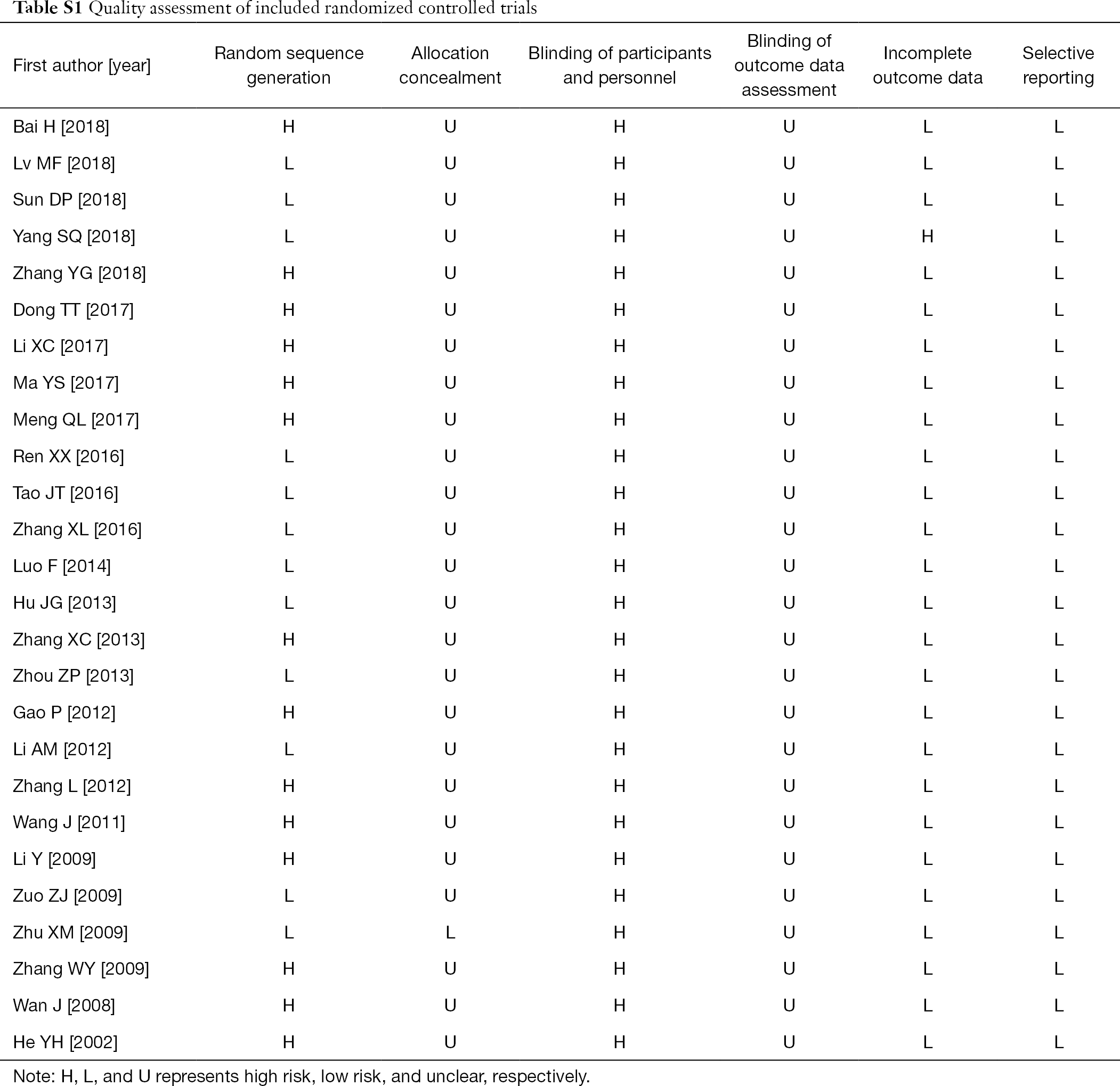 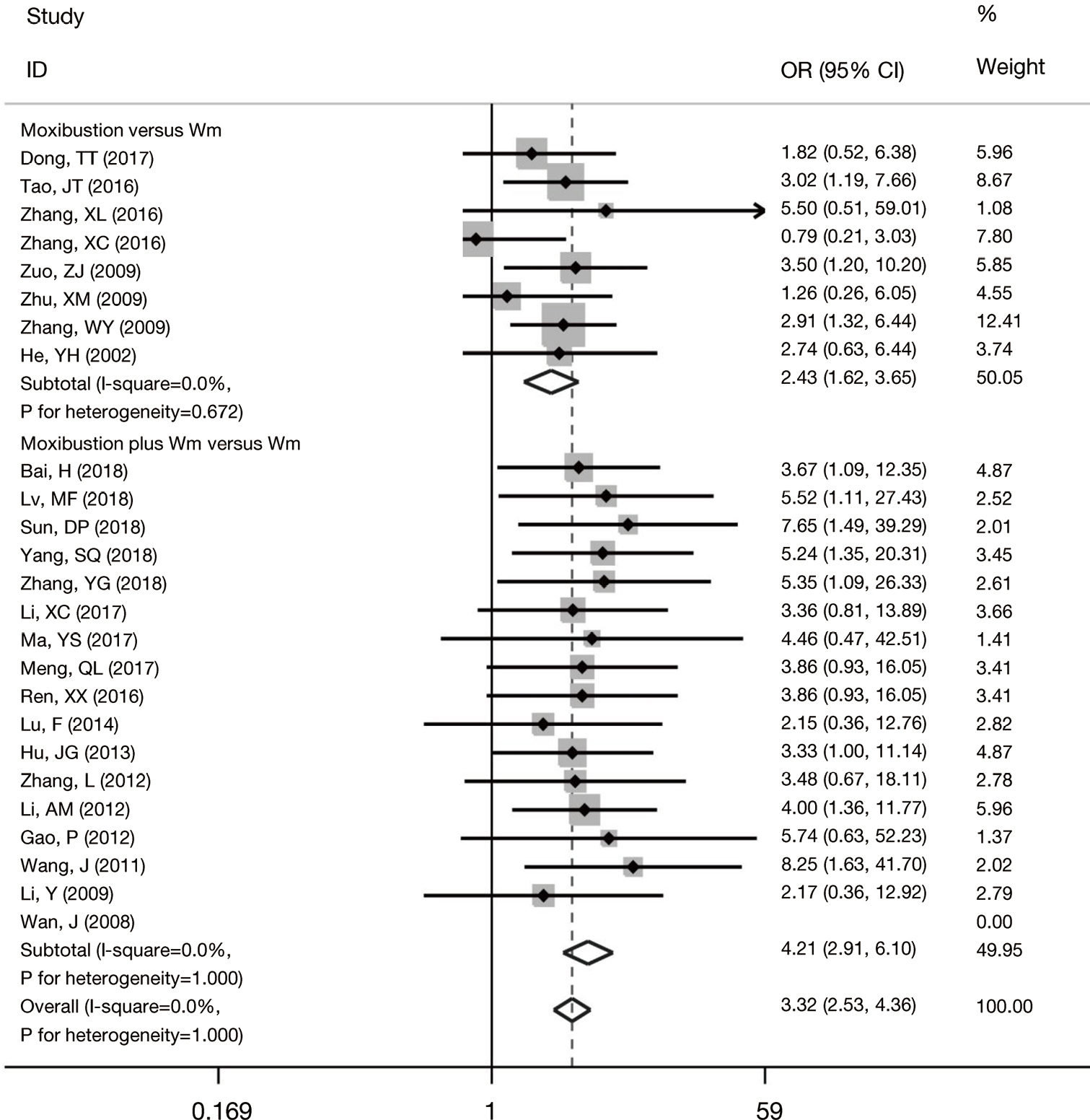 Figure 1 Forest plot of the clinical efficacy of moxibustion versus western medicine alone in the treatment of patients with ankylosing spondylitis. 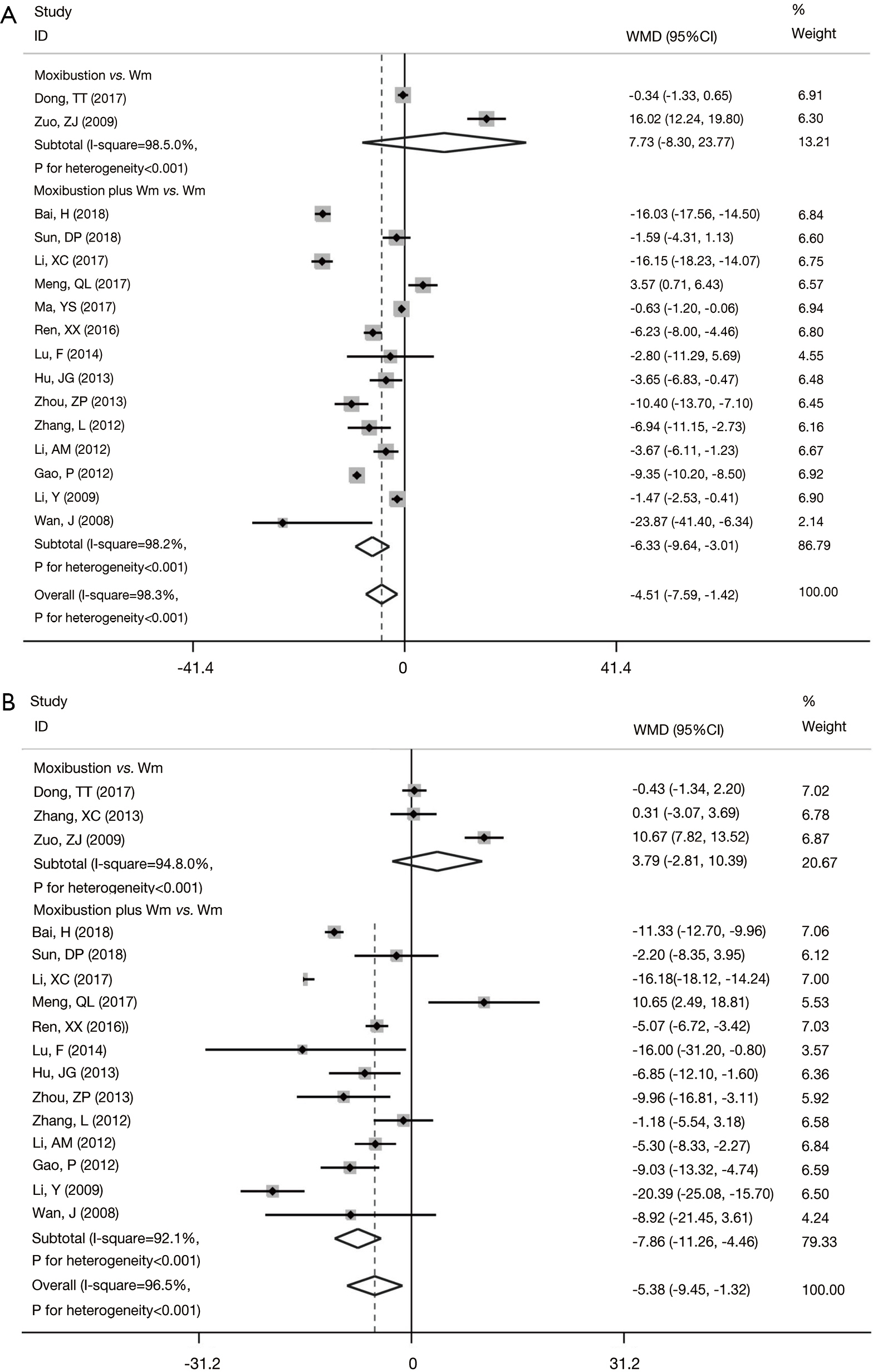 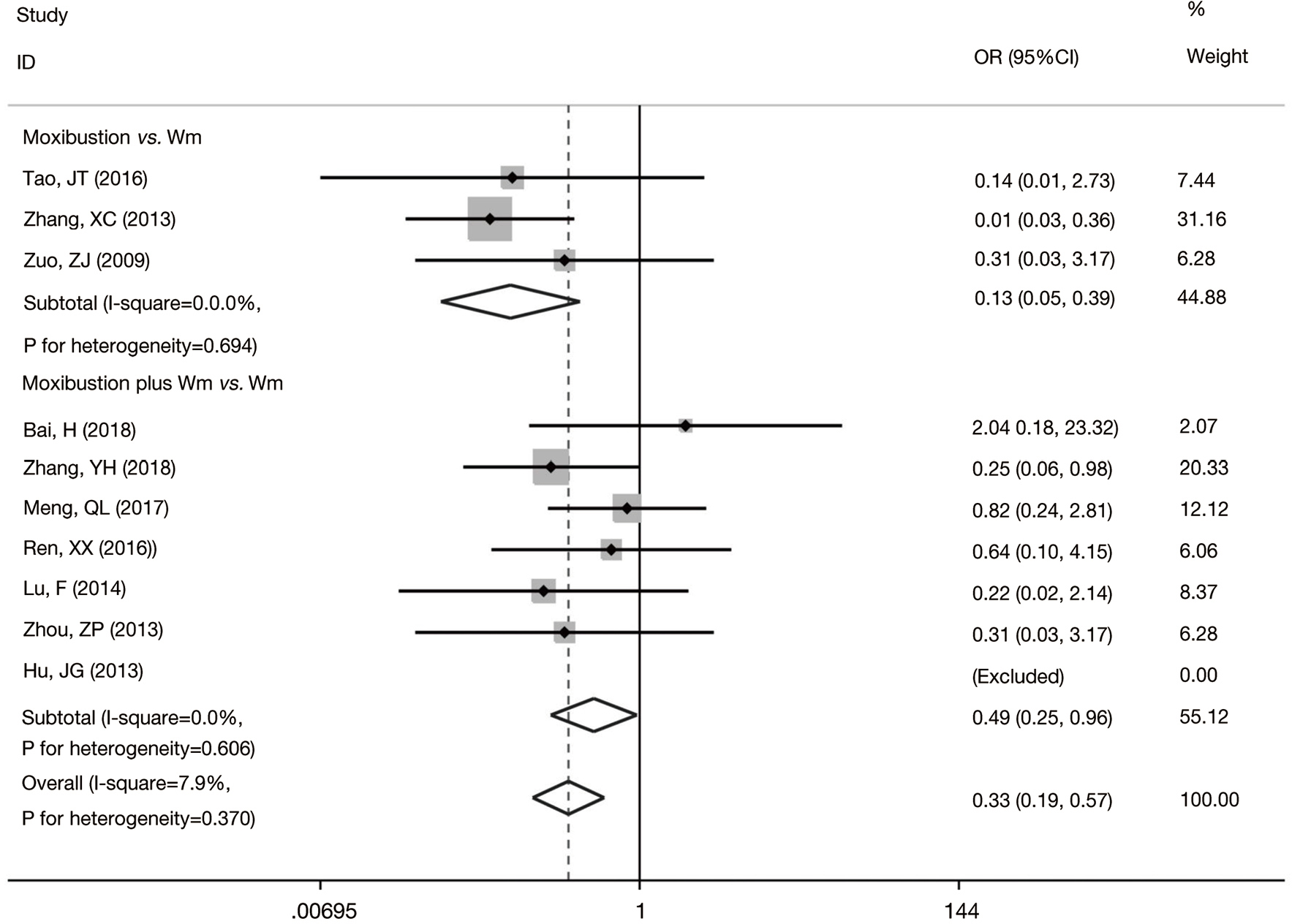 The current systematic review and meta-analysis showed that AS patients treated with moxibustion had better improvements in axis functions and inflammatory responses but fewer adverse effects compared with the control groups treated with Wm alone, suggesting that moxibustion might be a useful complementary and alternative therapy for AS patients.

Our analysis suggested that moxibustion could improve spinal mobility and inflammatory responses, which was in line with current evidence showing the anti-inflammatory effects of moxibustion. An in vivo study using collage-induced arthritis (CIA) mouse model reported that the serum levels of interleukin (IL)-6 were significantly lower in the moxibustion treated group compared with untreated controls (37). The anti-inflammatory effect of moxibustion might be also related with the regulation of Treg cell number in spleen and the altered expression of Foxp3 and NF-κB (38). As enthesis-associated changes are the primary lesions in AS, and inflammation at axial skeleton and sacroiliac may ultimately leads to restriction of spinal function (39); however, the widely used DMARDs of methotrexate (MTX) and salicylazosulfapyridine (SASP) have been reported to be beneficial effect to peripheral joints but have little effect on axial joints (40). Therefore, our findings clearly lend support to the use of moxibustion in the clinical management of patients with AS.

The merits and limitations to our study are worth mentioning. To the best of our knowledge, this is the first meta-analysis to evaluate the efficacy of moxibustion in the treatment of patients with AS. Furthermore, our study included a total 26 studies with a relatively large number of AS patients. The major limitation of the current study was that the quality of the included studies was relatively low, with high risk of bias according to the Cochrane Risk of Bias tool. Only twelve trials reported the random sequence generation methods. None employed patient blinding and accessor blinding due to the particularity of moxibustion treatment. In addition, though no statistically significant between-study heterogeneity was observed for the primary endpoint “clinical efficacy”, we observed marked heterogeneity for the secondary endpoints such as CRP, ESR and markers for axis functions. We performed stratification analyses as well as meta-regression, however, we did not detect contributing factors. The heterogeneity may be possibly related with the performances of the doctors, the quality of moxa made by Ay Tsao and others factor difficult to be controlled for in the trials. Furthermore, as treatment duration of the included studies were from 2 to 12 weeks, with a median duration of 8 weeks, the long-term efficacy of moxibustion in the treatment of AS remained to be further explored. In the future, large-scale multicenter RCTs with better design are warranted to validate the findings of the current study.

Our study suggested that moxibustion was an effective complementary treatment for AS patients, especially in terms of improving spinal mobility and inflammatory responses. However, further large-scale trials with better design are needed to confirm these findings.

We greatly appreciate Mr. David J. H. Wu at the University of Minnesota Medical School for his help with the language of this manuscript.

Conflicts of Interest: All authors have completed the ICMJE uniform disclosure form (available at http://dx.doi.org/10.21037/apm.2020.02.31). The authors have no conflicts of interest to declare.

Ethical Statement: The authors are accountable for all aspects of the work in ensuring that questions related to the accuracy or integrity of any part of the work are appropriately investigated and resolved. The protocol of the present study was registered and approved by PROSPERO under the registration number of CRD42019104815.