Increased cytokines [interleukin-8 (IL-8), IL-18, monocyte chemoattractant protein (MCP-1)], adhesion molecules [intercellular cell adhesion molecule-1 (ICAM-1) and vascular cell adhesion molecule 1 (VCAM-1)] are demonstrated to play an important role in the development of atherosclerosis and their expressions are regulated by nuclear factor-kappa B (NF-κB) (5-7). NF-κB family consists of five members: p65 (or RelA), RelB, c-Rel, p50 (NF-κB1) and p52 (NF-κB2). The activated NF-κB pathway can be divided into classical and non-classical pathway. The classical NF-κB pathway is mediated by IκB-p65/p50 which regulates expression of most proinflammatory genes, including E-selectin, ICAM-1, VCAM-1 and IL-18. While the non-classical NF-κB pathway is mediated by NF-κB-inducing kinase (NIK) and IκB kinase α (IKKα)-dependent phosphorylation of p52/p100 which results in the transcription of pro-inflammatory chemokines (8,9). The best studied stimuli to induce classical NF-κB pathway are TNF and LPS, and both classical and non-classical NF-κB pathway can be induced by the activated lymphotoxin beta receptor (Ltβr) (10,11). Ltβr is a member of the tumor necrosis factor receptor superfamily and constitutively expresses on a wide variety of cells including VSMCs (12,13). Ltβr has been identified as a key mediator in multiple physiological and pathological processes by interacting with NF-κB (14). Moreover, VSMCs-Ltβr has been reported to protect against atherosclerosis by maintaining structure, cellularity and size of artery tertiary lymphoid organs in mice (13). However, how Ltβr regulates NF-κB signaling pathway in LPS-stimulated smooth muscle cells (SMCs) is not completely known.

Besides, dysregulation of microRNAs (miRNAs) expression is demonstrated to modulate inflammatory responses by interfering NF-κB signaling pathway (15) and is associated with many diseases such as atherosclerosis, cancers and diabetes (7,16). miRNAs are a class of highly-conserved, non-coding RNAs of 18-25 nucleotides in length. miRNAs interact with their targets genes and mediate indispensable and negative regulators of gene expression at the post-transcription level (17).

Therefore, in this study, we investigated whether Ltβr regulated LPS-induced inflammation in VSMCs by modulating miRNAs and NF-κB activation which might offer new targets for treatment of cardiovascular diseases, such as atherosclerosis.

Mouse aortic SMC line (MOVAS cells) was bought from ATCC. Cells were cultured in high-glucose Dulbecco’s Modified Eagle Medium (DMEM) supplemented with 10% fetal bovine serum (FBS) at 37 °C in a humidified, 5% CO2 atmosphere. Normal MOVAS cells or shLtβr transduced MOVAS cells were treated with or without LPS (1 µg/mL) for 16 or 24 h in 5% FBS medium. Each treatment was triplicated with different passage of MOVAS cells.

After confluence, cells were treated with or without LPS (1 µg/mL) for 16 or 24 h in 5% FBS medium. Then the medium was centrifuged for 15 minutes at 1,000 g, 4 °C to remove particulates. The medium was stored at −20 °C until the assay started. The level of IL-18 in medium was determined by using ELISA kit according to the manufacturer’s instruction. The concentration was calculated according to the absorbance of the samples and the standard curve.

After treatment, cells were washed twice with ice-cold PBS, lysed with RIPA lysis buffer, centrifuged and quantified with a Bradford protein assay kit according to the manufacturer’s instruction. Proteins were separated by 10% SDS-PAGE and then transferred to PVDF membranes. Membranes were blocked in 5% nonfat milk/TBST for 1 h at room temperature and then incubated with primary antibodies [polyclonal rabbit anti-Ltβr (1:1,000), rabbit anti-p-p65 (1:1,000), rabbit anti-p65 (1:1,000) and monoclonal mouse anti-GAPDH (1:5,000)] overnight at 4 °C. After three times washes, membranes were incubated with second antibodies [goat anti-rabbit IgG (H+L) (1:3,000) and goat anti-mouse IgG (H+L) (1:3,000)] for 1 h, washed three times and subsequently visualized using ECL kit.

RNA interference (RNAi) is widely used in gene knockdown analysis and as a tool to investigate the function of specific genes or proteins. In order to investigate the role of Ltβr in VSMCs inflammation, the expression of Ltβr was silenced in MOVAS as previously described. The stable complex of shLtβr (interference sequence: GCCAAGACACGGTTTGCAA) and lentiviral vector (LV3-M-Ltβr-shRNA1) was constructed by GenePharma. The control group was transfected with the complex of non-targeting controls-shRNA (validated not to affect any gene) and lentiviral vector. Before transduction, 1×105 cells/well were cultured in 24-well plates for 18–24 h. When cells were about 2×105 cells/well, cells were incubated with complex and 6 µg/mL polybrene in 2 mL medium without FBS for 4 h. Then 2 mL fresh medium was added into each well for diluting the concentration of polybrene. After 12–24 h transduction, the medium was then changed into normal medium and cultured for 48 h. Seventy-two hours after transduction, the cells were stimulated with LPS as described above and then harvested for Western blotting or total RNA isolation.

smRNA-seq was performed as previously described (18). Briefly, total RNA was isolated as above mentioned. Then RNA samples were first DNase-treated and assessed for total quality using Agilent 2100 Bioanalyzer, followed by 2 rounds of polyadenylate positive (poly A+) selection and conversion to cDNA. RNA sequencing was performed on the Illumina HiSeq 2500 using the latest versions of sequencing reagents. TargetScan 7.0 was used to predict target genes.

The data were presented as the means ± SD. The measurement data were compared between the two groups with Student’s t-test. The statistical analyses were conducted with SPSS 24.0 software. P<0.05 or P<0.01 was considered statistically significant. 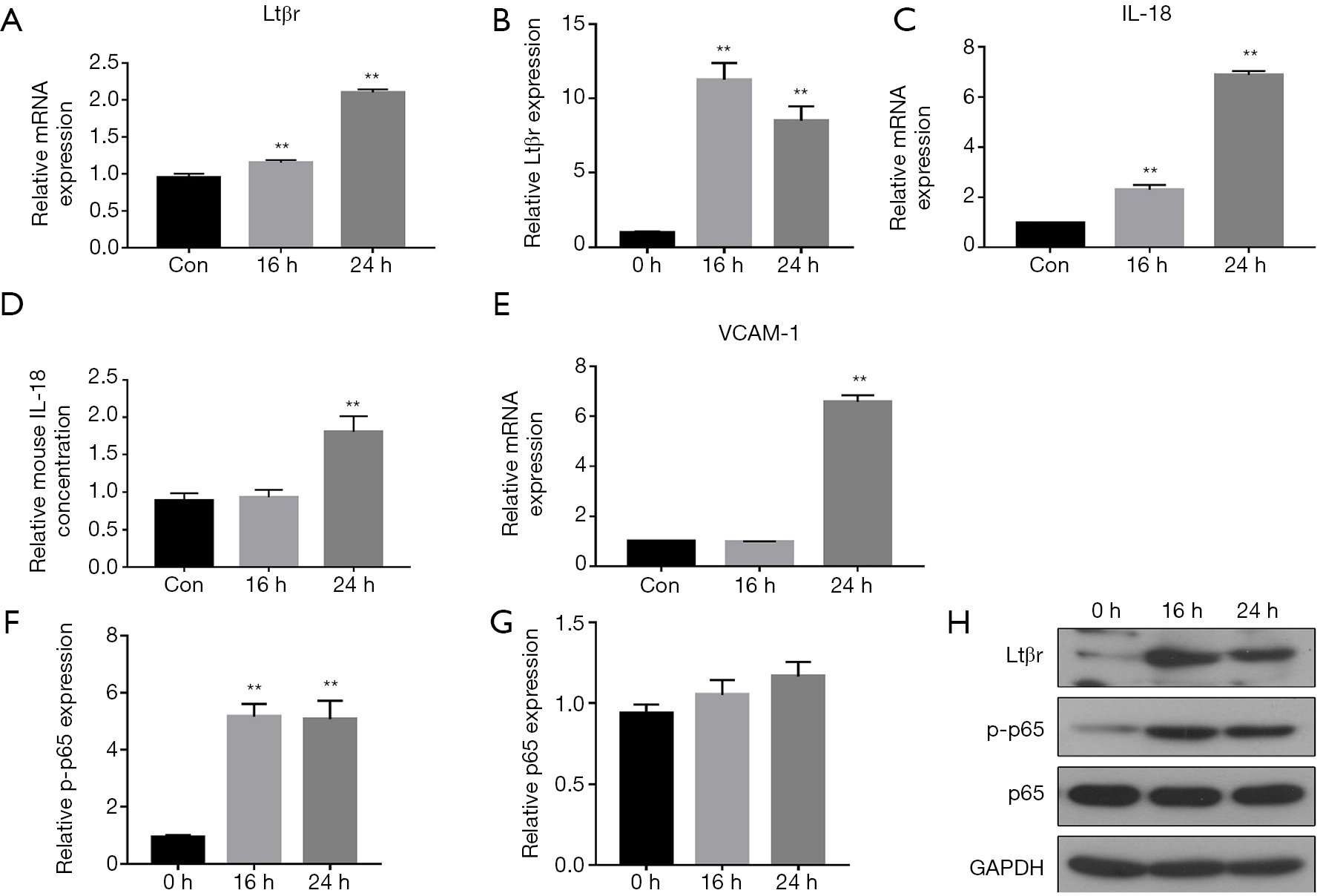 To investigate the interaction between Ltβr and LPS-induced inflammation in MOVAS cells, Ltβr was silenced by using Ltβr-specific shRNA and examined the levels of inflammatory factors including IL-18, VCAM-1 and p-p65. We first found that at 72 h after shLtβr transduction, more than 60% gene and protein expression of Ltβr was significantly and stably inhibited compared with the control group (Figure 2A,B), while cell viability was unaffected (data not shown). Then, we examined the levels of LPS-induced inflammatory factors including Ltβr, IL-18, VCAM-1 and p-p65 in shLtβr transduced MOVAS cell. mRNA and protein levels of Ltβr were still upregulated by LPS stimulation. However, the levels were significantly lower than in LPS-stimulated non-shLtβr MOVAS cells (Figure 3A,B). LPS-induced IL-18, VCAM-1 and p-p65 expression in shLtβr transduced cells showed similar trend with expression of Ltβr (Figure 3C,D,E,F,G,H). 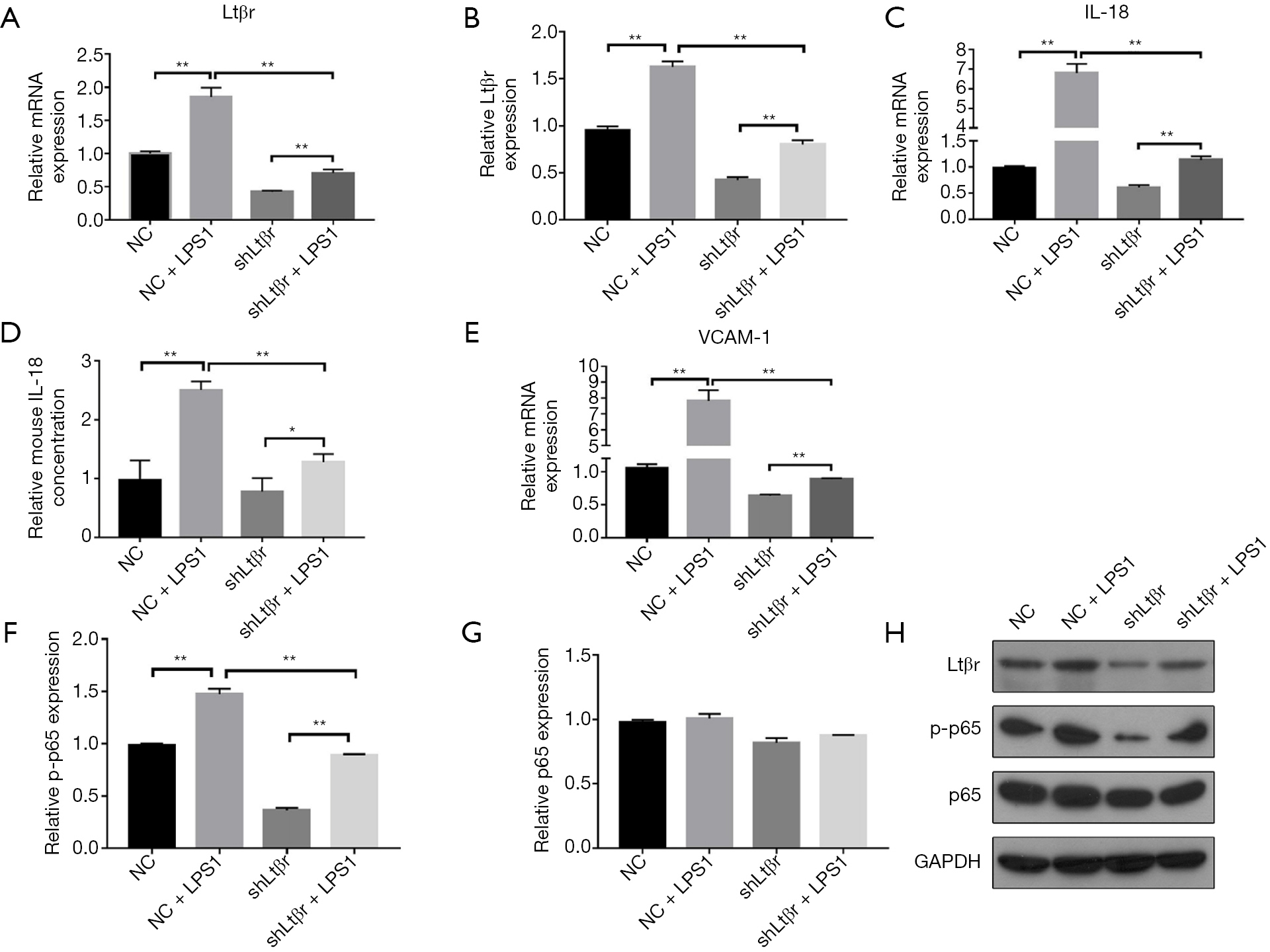 As mentioned above, miRNAs played an important role in regulating inflammation. Therefore, whether miRNAs expression was changed by shLtβr transduction was determined by smRNA-Seq analysis. LPS-induced different miRNAs expression in only lentiviral vector (without shLtβr sequence)-transduced MOVAS cells and lentiviral vector/shLtβr-transduced MOVAS cells was compared. With smRNA sequencing analysis, a total of 1,917 miRNAs were identified in the study. Based on a 95% confidence level, cutoff values of 2-fold for upregulated and downregulated genes were used to define a gene as being differently expressed gene in present study. Through global normalization of the raw data, heatmap data indicated that 10 miRNAs were upregulated and 64 miRNAs were downregulated (Figure 4). And 64 downregulated miRNAs in shLtβr transduced MOVAS cells were listed in Table 1. 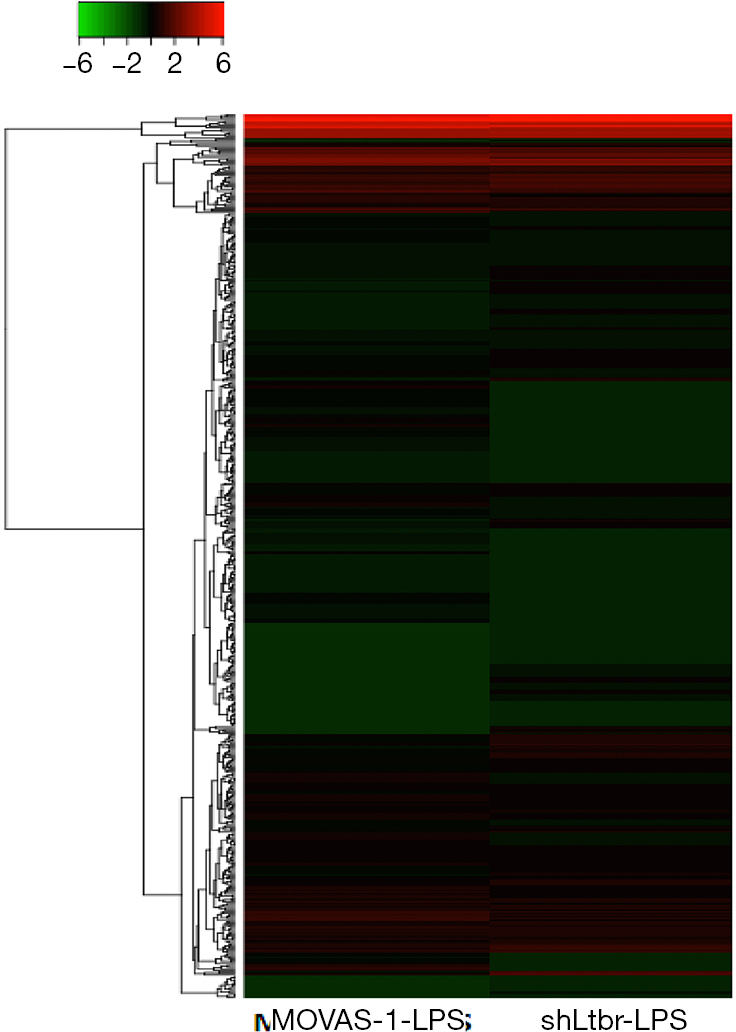 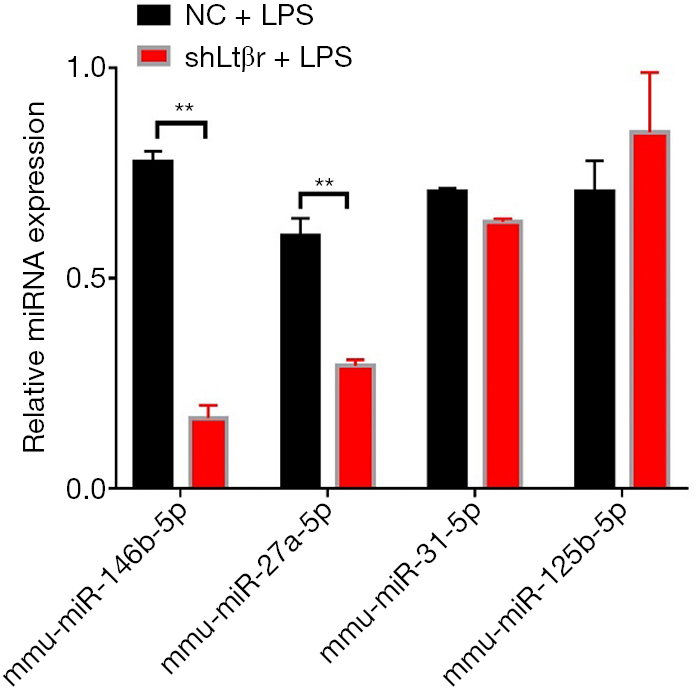 VSMCs inflammation induced by LPS characterized by increased production of inflammatory cytokines, chemokines, adhesion molecules, transcription factors and changed miRNAs expression which were involved in the development of atherosclerosis and connect reciprocally (3). Therefore, in present report, we conducted experiments to reveal the downstream of Ltβr and its regulatory effects on miRNAs/NF-κB signaling pathway and subsequent inflammatory cytokine and adhesion molecule expression in LPS-stimulated VSMCs for the first time.

Firstly, Ltβr was found to be expressed on non-stimulated VSMCs and increased by LPS stimulation which suggested its role in regulation of inflammation in VSMCs. In previous study, Ltβr activation was involved in inflammatory responses which was mediated by activating classical and non-classical NF-κB pathway (14,19). NF-κB is a ubiquitous transcription factor and NF-κB activation is reported to be crucial for the expression of inflammatory mediators including adhesion molecules (VCAM-1) and cytokines (IL-18) in VSMCs (20-22). VCAM-1 expresses not only on endothelial cells but also SMCs and facilitates the accumulation of transmigrated immune cells within the vascular walls in the development of atherosclerosis (23). IL-18 is a pro-atherogenic cytokine which is highly expressed in SMCs of atherosclerotic lesions. Recombinant IL-18 increases cytokines production and intensify adhesion molecules expression in endothelial cells (6). Lower expression of IL-18 was accompanied by less development of atherosclerosis in mice (20). Furthermore, elevated levels of plasma IL-18 are associated with the extent of coronary atherosclerosis (24). Therefore, downregulation of VCAM-1 and IL-18 in inflammation will be beneficial for atherosclerosis. In present study, LPS-increased VCAM-1 and IL-18 were restored by shLtβr transduction. Furthermore, LPS stimulation-induced the phosphorylation and subsequent translocation of p65 to the nucleus in normal MOVAS cells were also inhibited by shLtβr transduction. All these findings indicated that Ltβr-regulated VSMCs inflammation including IL-18 production and VCAM-1 expression might be associated with its role in modulating the activation of NF-κB. As we mentioned above, miRNAs were reported to play an important role in regulating the inflammatory responses by modulating gene expression of upstream factors of NF-κB signaling pathway or directly modulating gene expression of subunits of NF-κB (25,26). Dysregulation of miRNAs was associated with the development of vascular inflammation (27). Therefore, whether miRNAs expression was influenced by shLtβr transduction has also been investigated. miRNAs expression was dysregulated and miR-146b-5p and miR-27a-5b were significantly downregulated in LPS-treated shLtβr cells which were accompanied with inhibited phosphorylation of p65 and NF-κB-mediated inflammatory factors, such as IL-18 and VCAM-1.miR-146b-5p acted as an inhibitor of NF-κB-mediated inflammation by targeted expression of IL-1 receptor-associated kinase 1 (IRAK1) and TNF receptor-associated factor 6 (TRAF6), upstream regulators of NF-κB, in monocytes and endothelial cells. Increased expression of IRAK1 and TRAF6 leaded to more NF-κB p65 DNA binding activity. Altered p65 nuclear translocation leaded to changes in the expression of downstream targets of NF-κB signaling including VCAM-1 expression (25,28). Besides, miRNAs were also reported to directly regulate NF-κB subunit by silencing NFκB1 and p65 to inactivate canonical NF-κB signaling (29). miR-146b-5p was found to target NFκB1 gene (data not shown).

In summary, two new findings were demonstrated in present study: (I) LPS-induced NF-κB activation and subsequent pro-inflammatory factors (IL-18 and VCAM-1) expression were inhibited by silencing Ltβr on MOVAs cells; (II) the expression levels of miR-146b-5p and miR-27a-5p which were reported to modulate the NF-κB activation were downregulated by shLtβr transduction. We made a conclusion that Ltβr could regulate VSMCs inflammation in atherosclerosis by modulating miRNAs/NF-κB/IL-18-VCAM-1 cascade. These findings verify the role of Ltβr in VSMCs inflammation and provide a potential signaling cascade mediated the effects of Ltβr which offers new insights into the molecular mechanisms underlying VSMCs dysregulation and pathogenesis of atherosclerosis.

Conflicts of Interest: All authors have completed the ICMJE uniform disclosure form (available at http://dx.doi.org/10.21037/apm.2020.03.20). The authors have no conflicts of interest to declare.