Gestational diabetes mellitus (GDM) is defined as any degree of glucose intolerance with onset or first recognition during pregnancy (1,2). In recent years, changes in lifestyle, unhealthy dietary behaviors, insufficient activity, and later childbearing have contributed to the increased incidence of GDM, which was reported to be up to 9.6% (3). GDM is associated with considerable risks to both the mother and the developing fetus (4,5). Previous studies have shown that poor blood glucose level control is associated with increased risk of abortion, preterm labor, gestational hypertension, and infection (6,7). Furthermore, high blood glucose levels in the gestation period increase the incidence of negative fetal and neonatal outcomes, such as macrosomia, deformity, and neonatal asphyxia (8-10). In addition, long-term clinical follow-up studies have indicated that up to 50% of women with GDM may develop diabetes over 20–30 years after pregnancy (11,12). Due to its gravity and dramatically increasing incidence, GDM is considered one of the most urgent health challenges of this century (13-15). At present, there is no effective approach for the treatment of GDM. Hence, a new intervention is urgently needed.

Currently, medical nutrition therapy (MNT) is the most common method to address the dietary requirements of women with GDM (16,17). However, MNT has obvious shortcomings, including the lack of follow-ups (18,19). The 12-h comprehensive nutrition care (12h-HNC) is a newly developed approach in the treatment of GDM that was established at The First Hospital of Beijing. It consists of nutrition recipes, postprandial exercise, health education, and regular frequent follow-ups and is considered a new intervention to replace MNT. However, the efficacy of the 12h-HNC in improving the pregnancy outcomes and postpartum metabolism of women with GDM remains unclear.

In this study, we explored the effects of the 12h-HNC in patients with GDM with the aim to establish a more rational and effective prenatal care model.

Pregnant women with GDM at 24–28 weeks of gestation treated at The Fourth Hospital of Shijiazhuang from January 2014 to December 2016 were recruited. GDM was diagnosed as the presence of at least one of the following three findings in the 75-g oral glucose tolerance test: fasting plasma glucose (FPG) >5.1 mmol/L, postprandial blood glucose at 1 hour (1h-PBG) >10.0 mmol/L, and/or postprandial blood glucose at 2 hours (2h-PBG) >8.5 mmol/L. Patients with acute complications due to preexisting diabetes were excluded from the study. All patients were provided with written informed consent.

Patients were randomly assigned to a 12h-HNC group (n=158) or a control group (n=154). Those in the control group received traditional one-time nutrition guidance. For the 12h-HNC group, patients were kept in our department from 7:00 a.m. to 7:30 p.m., accompanied by one dietitian and one nurse. The 12h-HNC included nutritious meals for diabetic patients (3 meals and 2 snacks), postprandial exercise with guidance, and nutrition health education for diabetics. The specific process is shown in Figures 1 and 2. Appropriate nutrition recipes not only provide adequate calories and nutrition for pregnant women, but also prevent postprandial hyperglycemia and starvation ketosis. Accordingly, we calculated the total calories needed in a day for each patient and tailored the nutrition recipe to the patients’ individual needs (Table 1). The ratios of all nutrients are shown in Table 2. Patients received education in terms of nutrition and health related to diabetes, including relevant GDM knowledge, guidance on blood glucose monitoring, exercise guidance, and relevant nutrition knowledge (such as food exchange and calorie calculation). At the end of the day, the medical staff created a communication group on a social application, WeChat, and patients were followed up regularly. After the intervention, we communicated with the patients and solved their problems in the conversation group every night and regularly provided them with more knowledge on health. Simultaneously, we inquired about their glucose monitoring, exercise, diet, and weight control. 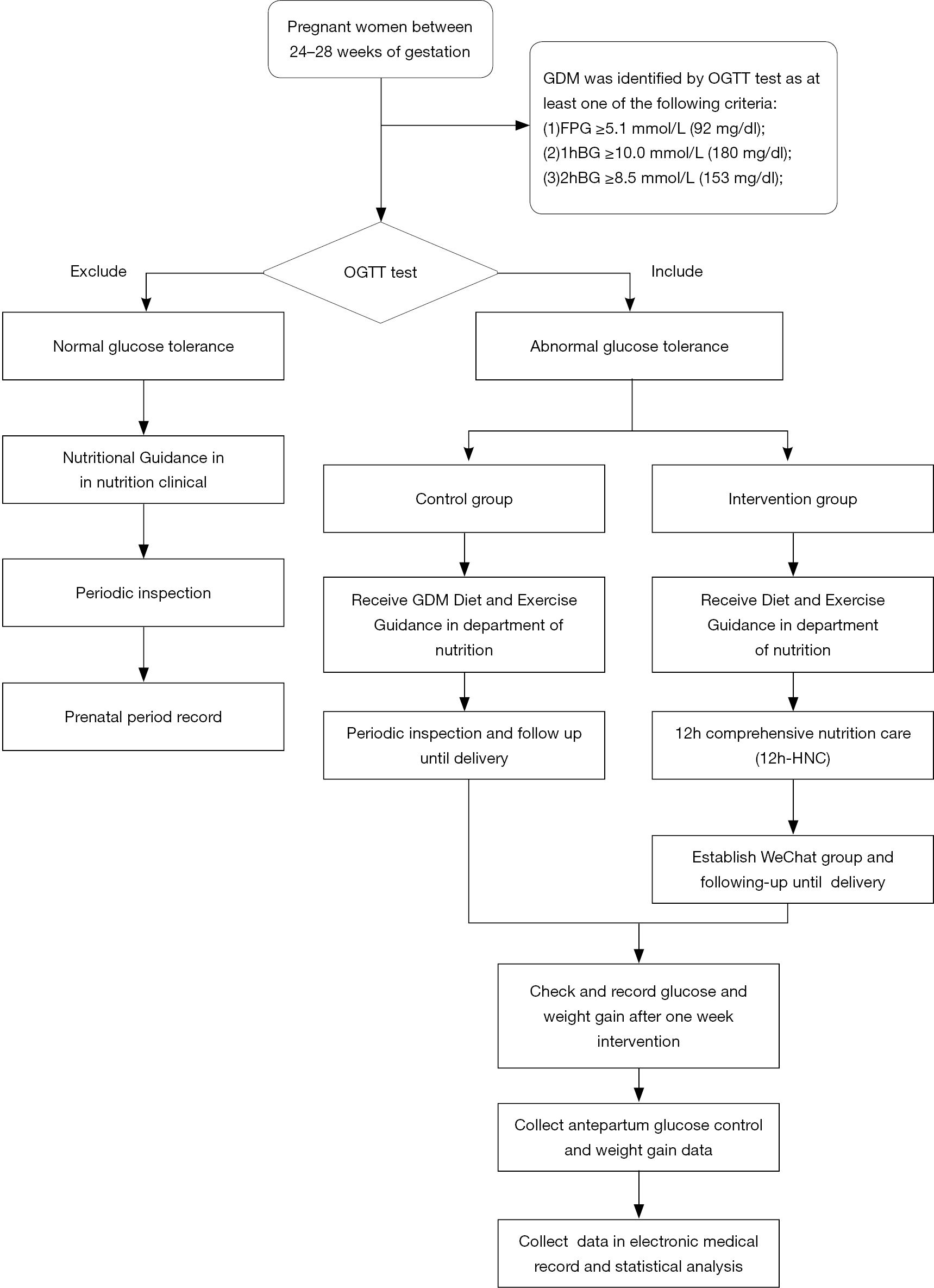 Figure 1 Study flow. Pregnant women underwent oral glucose tolerance test. Those who were diagnosed with gestational diabetes mellitus (GDM) were randomly assigned to an intervention group or a control group. The former received a 12-h comprehensive nutrition intervention, and the latter received routine nutrition guidance. At the end, the data were collected and analyzed. 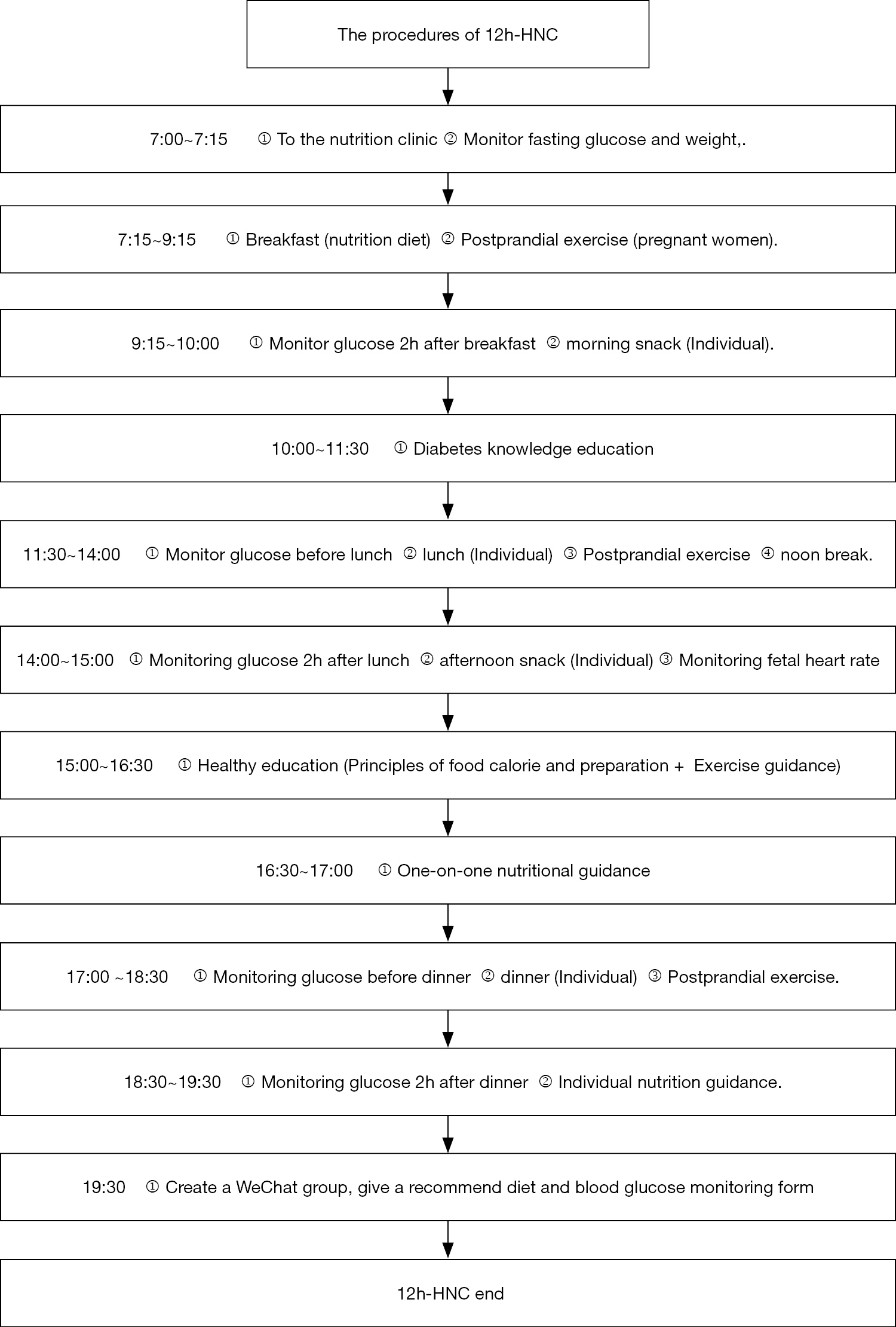 Figure 2 The process of the 12-h comprehensive nutrition intervention. It lasted from 7:00 a.m. to 07:30 p.m. and included recommended diet, exercise guidance, and health education, tailored per the patients’ individual needs. 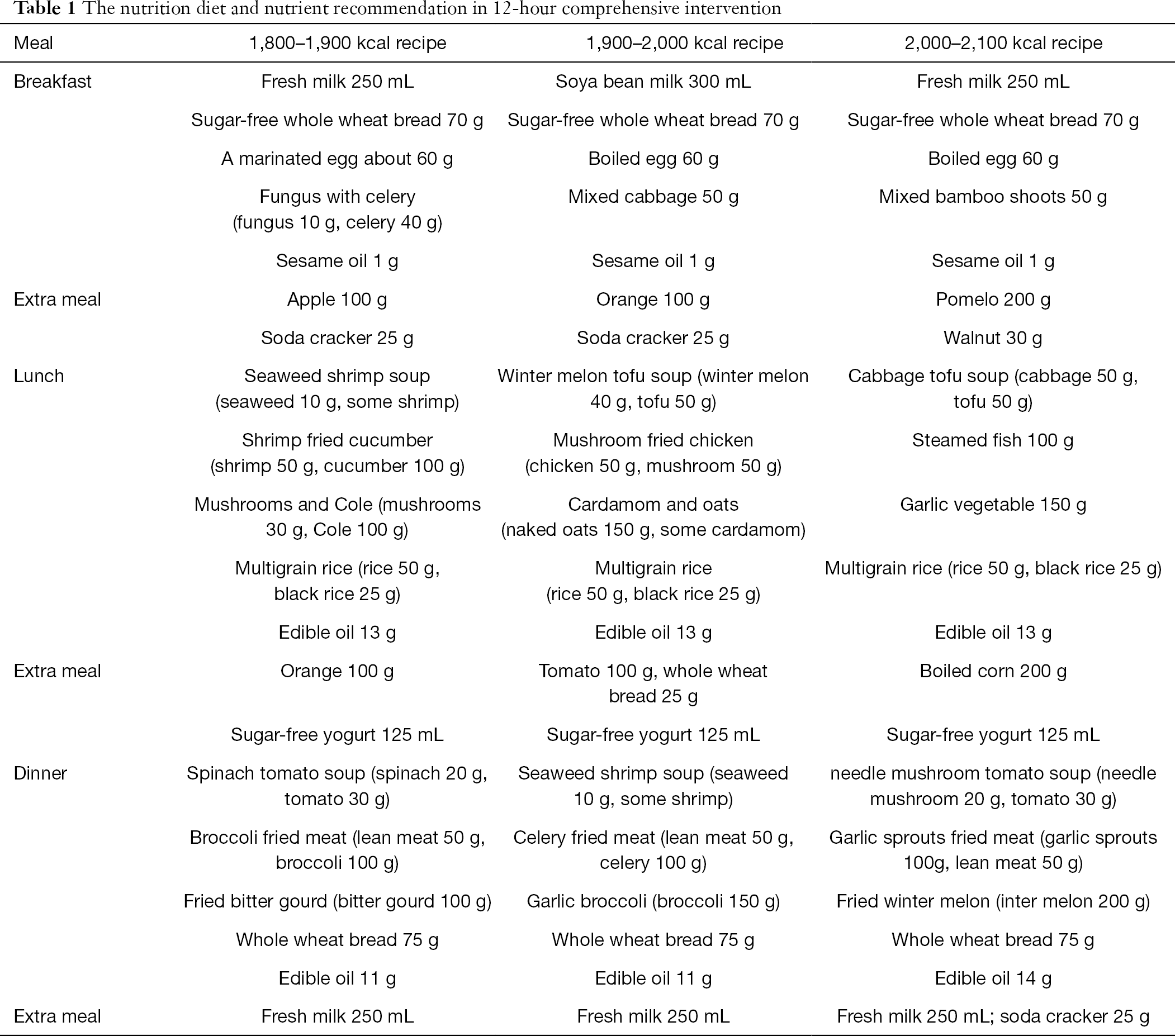 We recommended that patients monitor all-day blood glucose levels at least once per week. The patients’ weight increase, FPG, and 2h-PBG were recorded before delivery. After delivery, relevant patient data were obtained from the hospital electronic medical records, including pregnancy outcomes, neonatal birth weight, and incidence of neonatal hypoglycemia.

Data are expressed as mean ± standard deviation or n (%). Intergroup differences were analyzed using a two-tailed Student’s t-test or χ2 test. P values of <0.05 were considered statistically significant. All statistical analyses were performed with the SPSS statistical software package version 21.0.

A total of 312 pregnant women with GDM were enrolled in this study, with 154 in the control group and 158 in the 12h-HNC group. The baseline characteristics of patients in both groups are shown in Table 3. In the comparative analysis, patients in the 12h-HNC group had significantly lower 2h-PBGlevels (Figure 3, P<0.05) and average weight increase (Figure 4, P<0.05) than those in the control group. 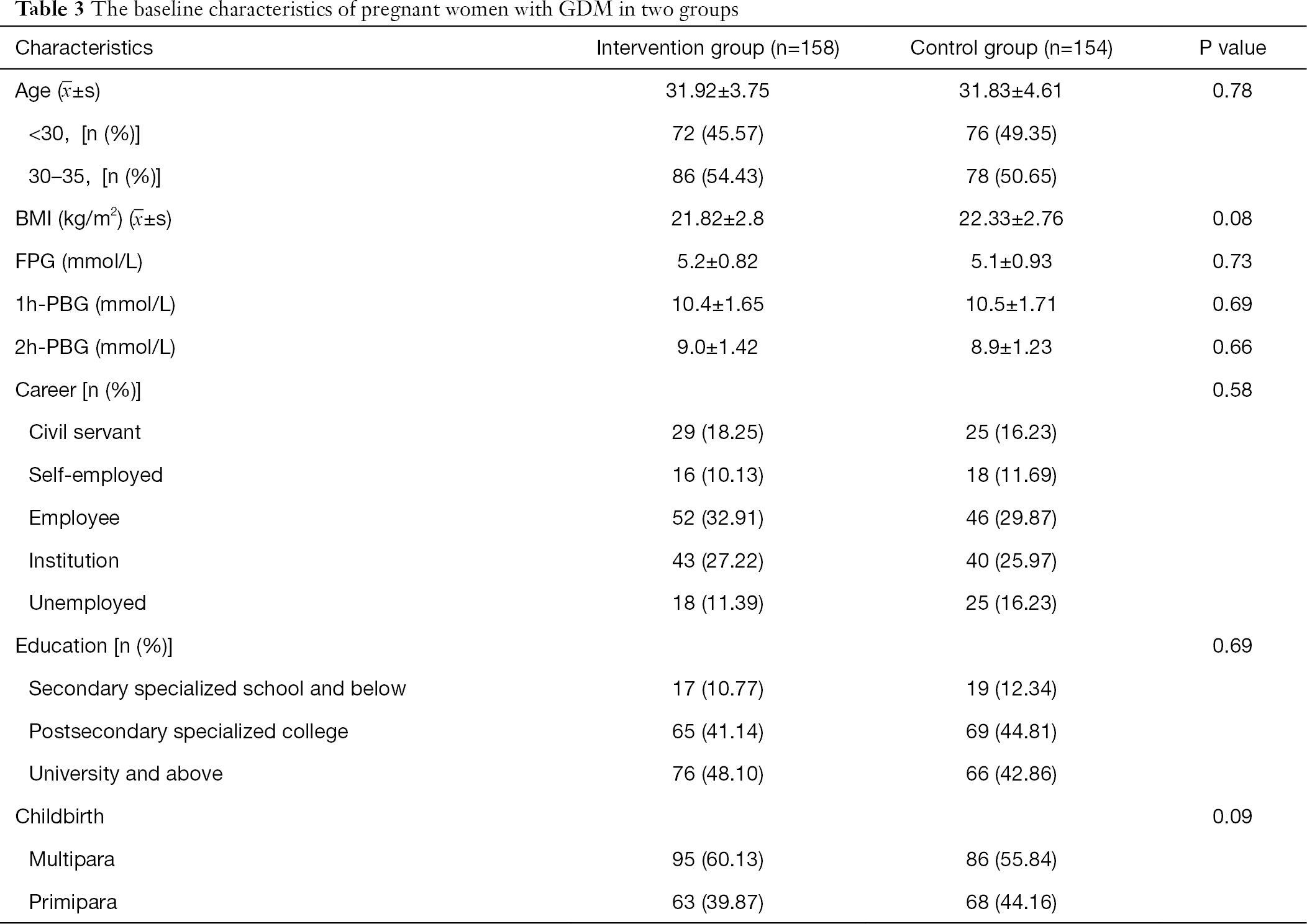 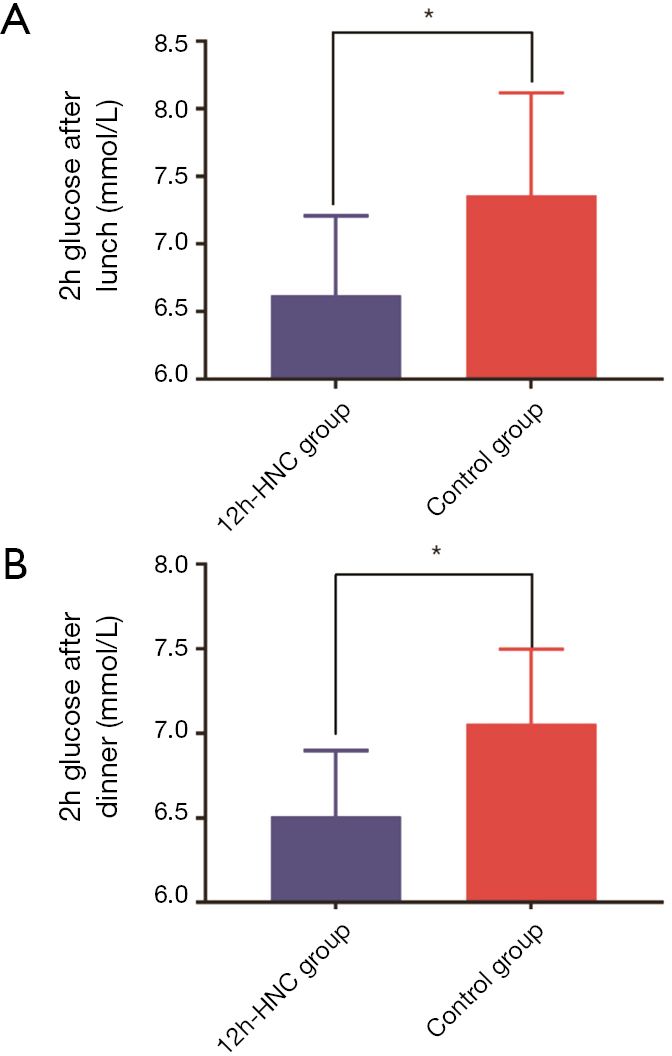 Figure 3 Postprandial blood glucose levels. The 2-h glucose levels after lunch (A) and dinner (B) were significantly lower in the intervention group. *, P<0.05. 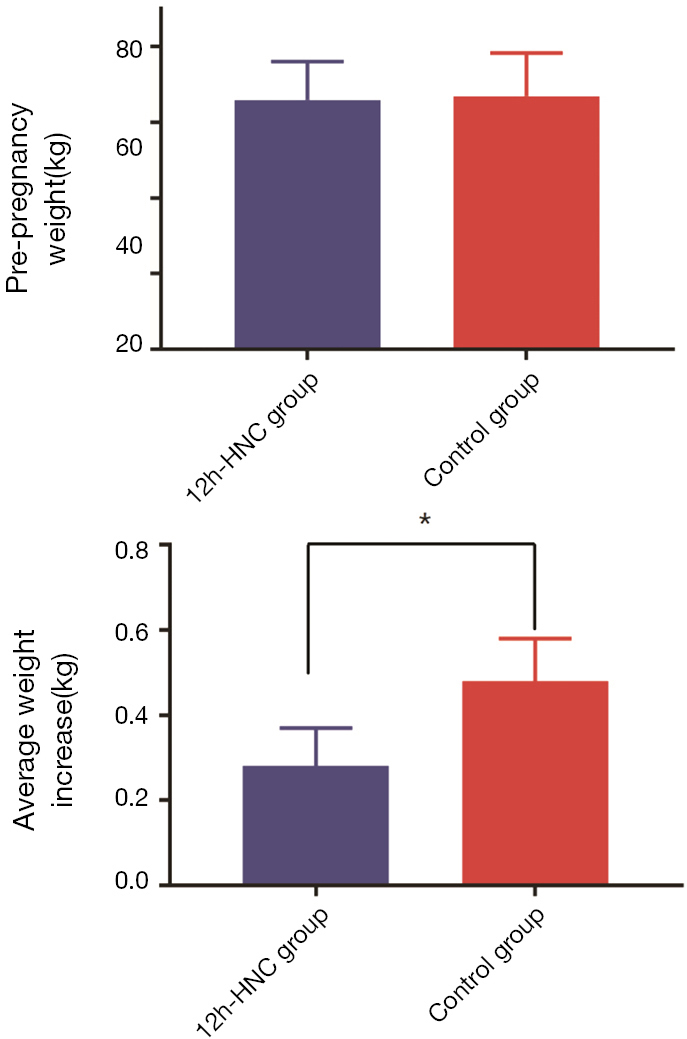 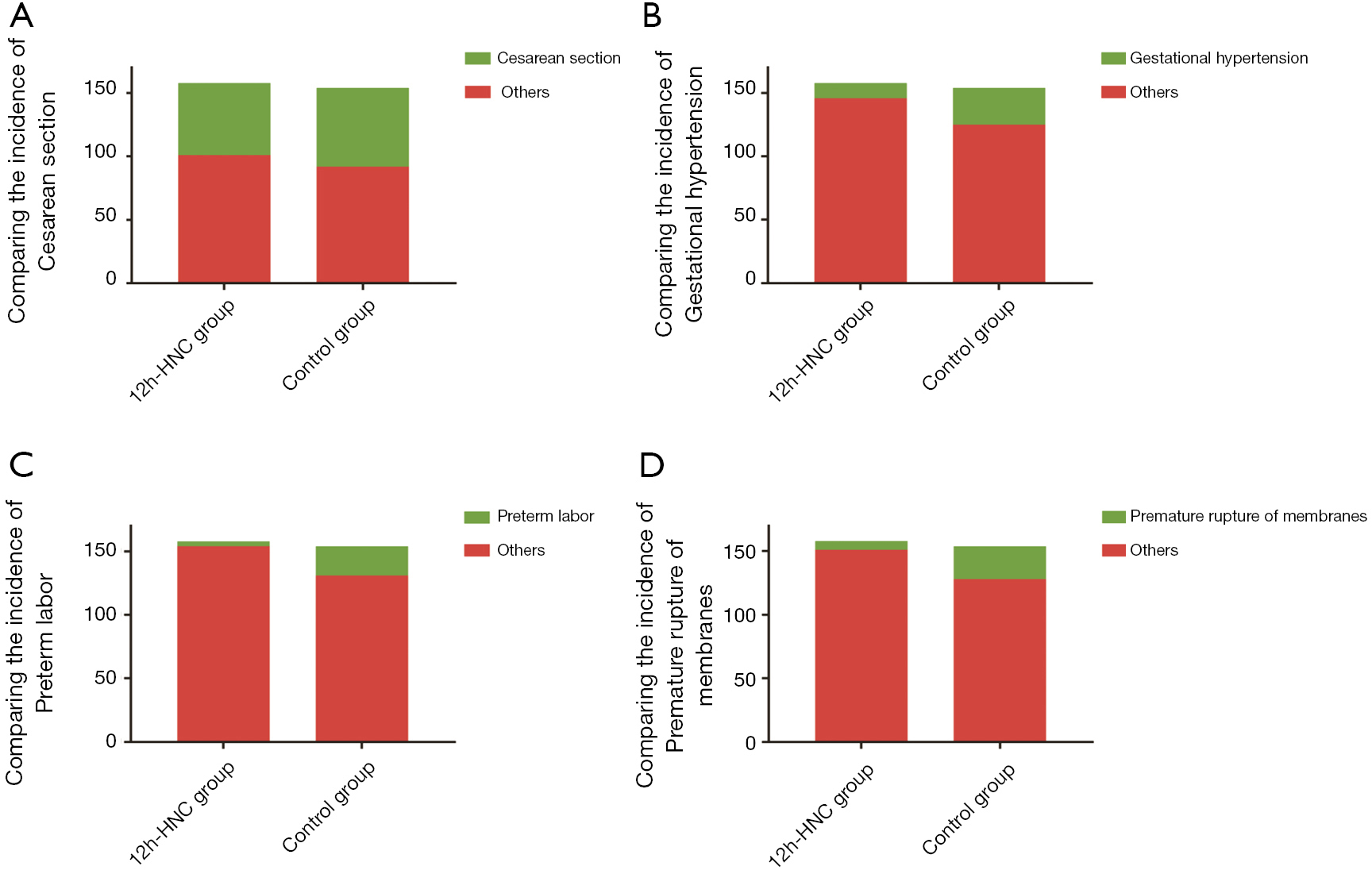 Figure 5 Maternal outcome comparison. (A) No difference was found between the two groups in the incidence of cesarean section. The intervention group had better outcomes regarding (B) gestational hypertension, (C) preterm labor, and (D) premature rupture of membranes. 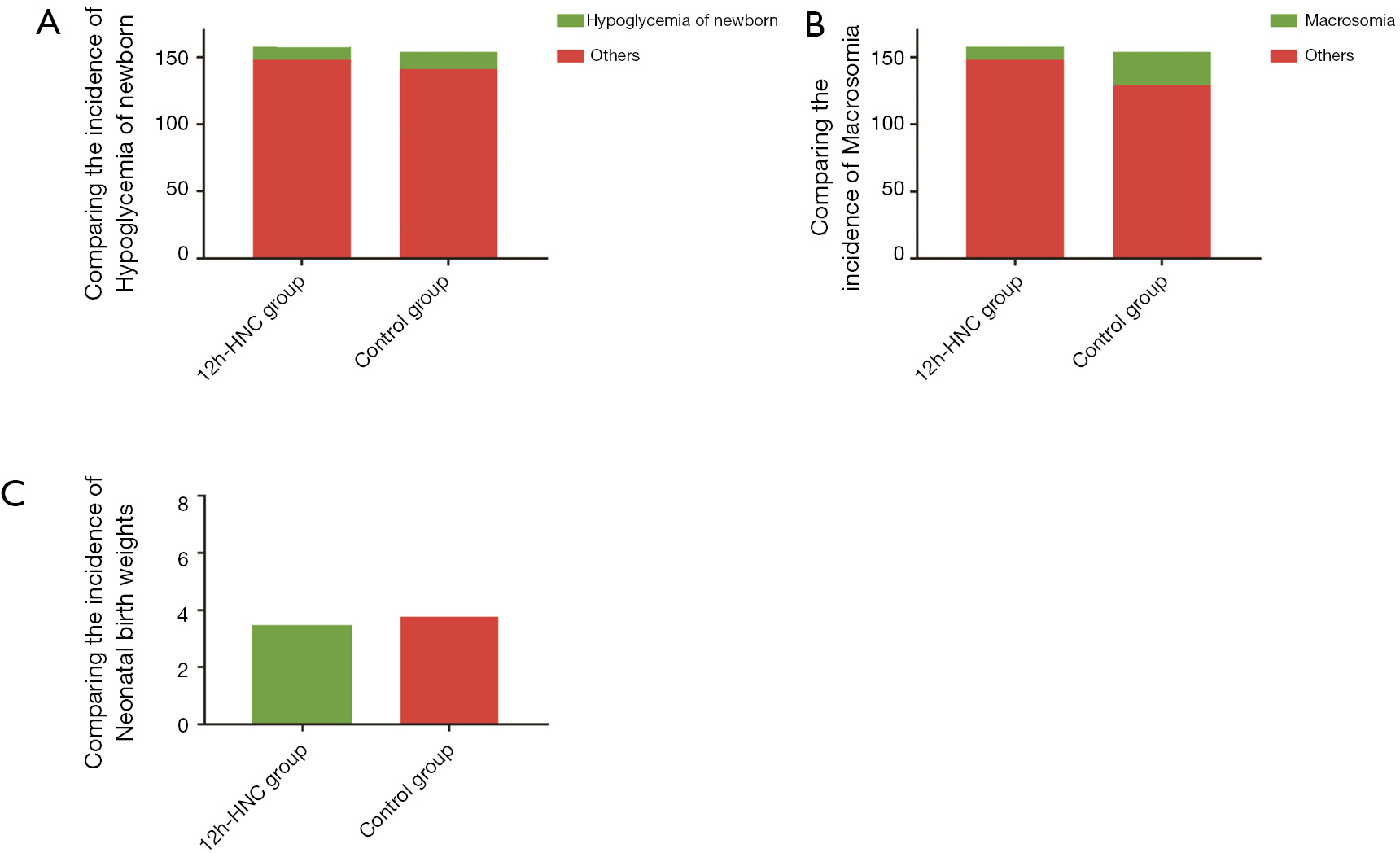 Figure 6 Neonatal outcome comparison. The intervention group had healthier neonates, with a lower incidence of (A) hypoglycemia of newborn and (B) macrosomia, and lower (C) neonatal birth weights.

The prevalence of GDM has been rapidly increasing in recent years worldwide and has increased significantly over the past two decades in China (20). GDM is associated with increased incidence of adverse maternal, fetal, and neonatal outcomes and increased risk of subsequent diabetes mellitus for mothers (21,22). Women with GDM have high blood glucose levels and abnormal glucose tolerance. It has been widely demonstrated that hypoglycemic therapy in GDM can improve pregnancy outcomes (23). However, the side effect of hypoglycemic agents on pregnant women remains unknown, and many patients refuse to receive hypoglycemic therapy. Furthermore, maintaining a healthy weight is also important. It has been reported that women with obesity are more likely to develop GDM. Liu et al. suggested that high rates of gestational weight gain, particular during early pregnancy, might increase a woman’s risk of GDM (24). Logan et al. showed that women with GDM were at higher risk of later metabolic disease (25). Black et al. demonstrated that obesity could lead to adverse outcomes regardless of the presence of GDM during pregnancy (26). Therefore, it is equally important to control both the weight increase and the blood glucose levels in women with GDM.

Traditional MNT is the most commonly used method for controlling blood glucose levels in women with GDM (27). However, its efficacy is unsatisfactory because of the lack of follow-ups. In this study, we proposed a new intervention, called the 12h-HNC, to enhance blood glucose level control in pregnant women with GDM. The 12h-HNC consists of nutrition recipes, postprandial exercise, health education, and regular follow-ups. During the 12h-HNC, patients learned to formulate a reasonable diet themselves and exercise in moderation, which helped them to control their blood glucose levels and weight increase. Patients who received 12h-HNC regularly monitored their blood glucose levels themselves. Moreover, the proper diet and exercise lowered the weight increase in these patients. Our continuous follow-up was an important measure to improve patient compliance, which made up for the shortcomings of MNT.

Comparison of patients’ outcomes showed that the 12h-HNC could reduce the risk of gestational hypertension, premature rupture of membranes, and preterm labor. Furthermore, consistent with the findings of previous studies (28), our results showed that the 12h-HNC had a positive effect on controlling neonatal birth weight and incidence of macrosomia. This intervention could lower the blood glucose levels, which helped to lower newborns’ weight. We found no significant difference between the two groups in the incidence of cesarean section, which was inconsistent with our previous findings. We speculate that this discrepancy can be attributed to the increasing trend of cesarean section among Chinese women. Spontaneous delivery in patients with GDM may result in unexpected adverse events, such as premature rupture of membranes, dystocia, and even death. In contrast, cesarean section provides more safety, less pain, and healthier babies. Therefore, an overwhelming number of patients prefer cesarean section, even in the absence of corresponding indications. This may have led to the different results in our study.

The 12h-HNC enabled better control of blood glucose levels and lower average weight increase after a trial on 300 patients with GDM. Therefore, this comprehensive intervention has broad prospects for future use to reduce complications and improve the maternal and neonatal outcomes in pregnant women with GDM.

Conflicts of Interest: All authors have completed the ICMJE uniform disclosure form (available at http://dx.doi.org/10.21037/apm.2020.03.16). The authors have no conflicts of interest to declare.

Ethical Statement: The authors are accountable for all aspects of the work in ensuring that questions related to the accuracy or integrity of any part of the work are appropriately investigated and resolved. This study complied with the Declaration of Helsinki and was approved by Ethics Committees of the Fourth Hospital of Shijiazhuang (No. 20200001). All patients provided written informed consent.