Obstructive sleep apnea-hypopnea syndrome (OSAHS) is a common sleep disorder that is characterized by obstructive apneas, hypopneas, and/or respiratory effort-related arousals caused by repetitive collapse of the upper airway during sleep (1). OSAHS is associated with numerous risk factors, including race, age, male, obesity, menopause craniofacial structural abnormalities and adverse living habits, such as smoking and drinking (2-5). Patients with OSAHS also have an increased prevalence of other diseases, such as hypertension, cardiovascular disease (6), type 2 diabetes mellitus (T2DM). However, it is often ignored by physicians and patients. In clinical practice, 82% of male patients and 93% of female patients with moderate to severe sleep apnea have not been diagnosed (7). Due to the increasing prevalence of overweight and obesity, more attention has been paid to OSAHS. CKD is defined by the presence of kidney damage or decreased kidney function lasting for >3 months, with implications for health (8). CKD has been a common disease seriously threatening human health in addition to cardiovascular and cerebrovascular diseases, diabetes and malignant tumors, and has become the 11th leading cause of death by 2016 (9). An increasing prevalence of CKD has been reported in the OSAHS patients (7). As an organ rich in blood perfusion, kidney function is sensitive to change in oxygen supply and susceptible to hypoxia injury. Although the correlation between OSAHA and CKD has been reported, but there are selective biases in available studies, such as diagnostic methods, exclusion factors, sample size, sample representativeness and comorbidity. Thus, the correlation between OSAHS and CKD and the effect of OSAHS on CKD should be further elucidated.

Totally 2,292 patients over 18 years old who completed whole night polysomnography (PSG) in Beijing Tsinghua Changgung Hospital from Dec 2014 to Nov 2018 were reviewed retrospectively. Of them, 424 patients were diagnosed with OSAHS and 20 patients with simple snoring. OSAHS was classified as mild, moderate and severe according to the Apnea-Hypopnea Index (AHI) (5–15, >15–30 and >30). Subjects received PSG monitoring for at least 7 consecutive hours during sleep at night. All patients before sleep monitoring did not take sedatives or hypnotizers, and not take food or drugs containing alcohol or caffeine. PSG monitoring involved oral and nasal airflow, chest and abdomen movement, AHI, blood oxygen saturation, and oxygen desaturation index (ODI). Simple snoring (control group) was considered when AHI was <5 times/h. OSAHS was diagnosed when AHI was ≥5 times/h. All patients were not treated for any sleep apnea disorder.

Statistical analysis was performed with SPSS version 25.0 for MAC (SPSS Inc., Chicago, IL, USA). Continuous variables with normal distribution were expressed as mean ± standard deviation (SD) and compared with t-test. The ratios were compared with Chi-square test. Pearson correlation analysis was used to analyze the correlation among variables. Multivariate linear regression and binary Logistic regression analyses were used to explore the independent risk factors. A value of P<0.05 was considered statistically significant. 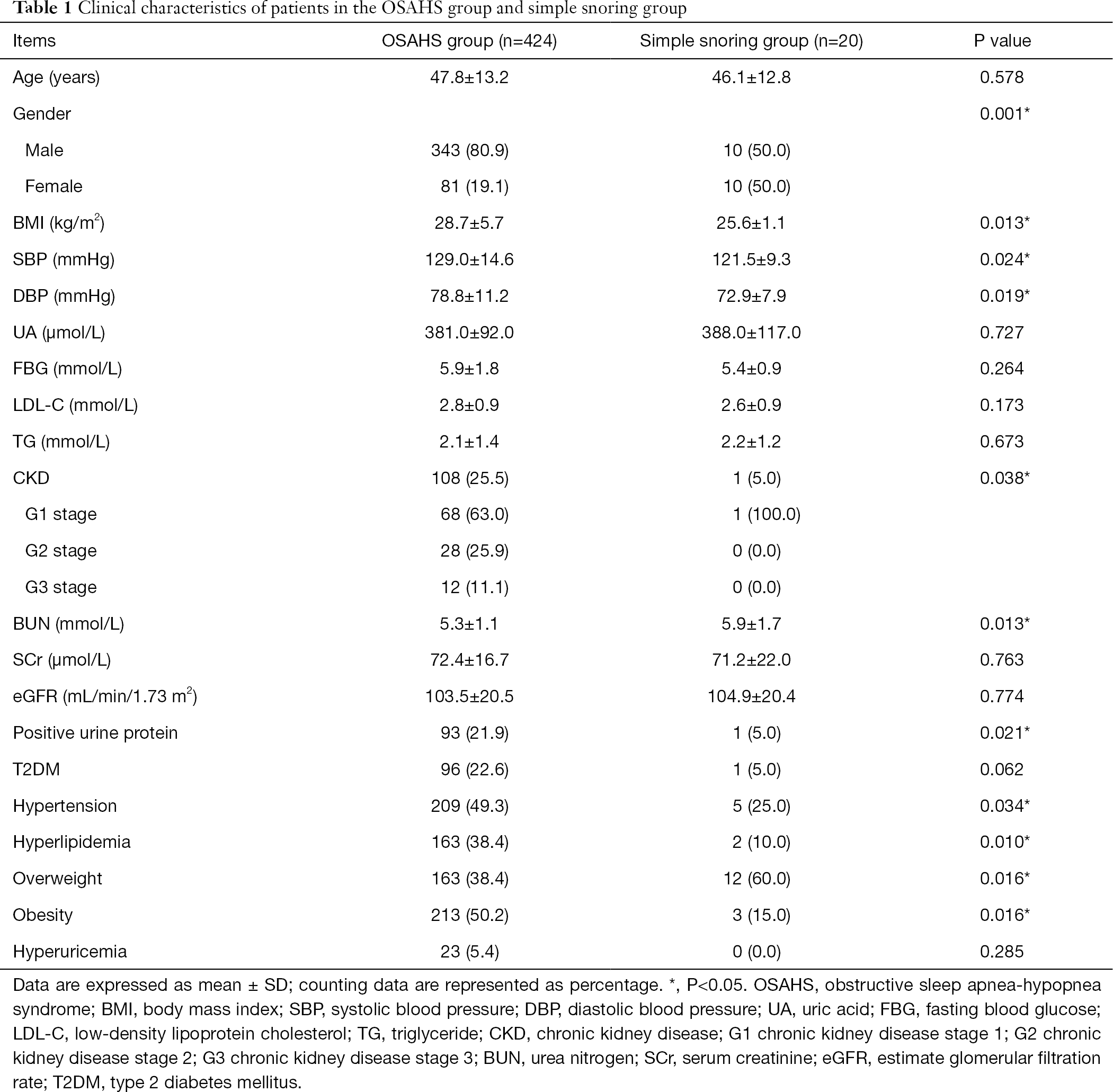 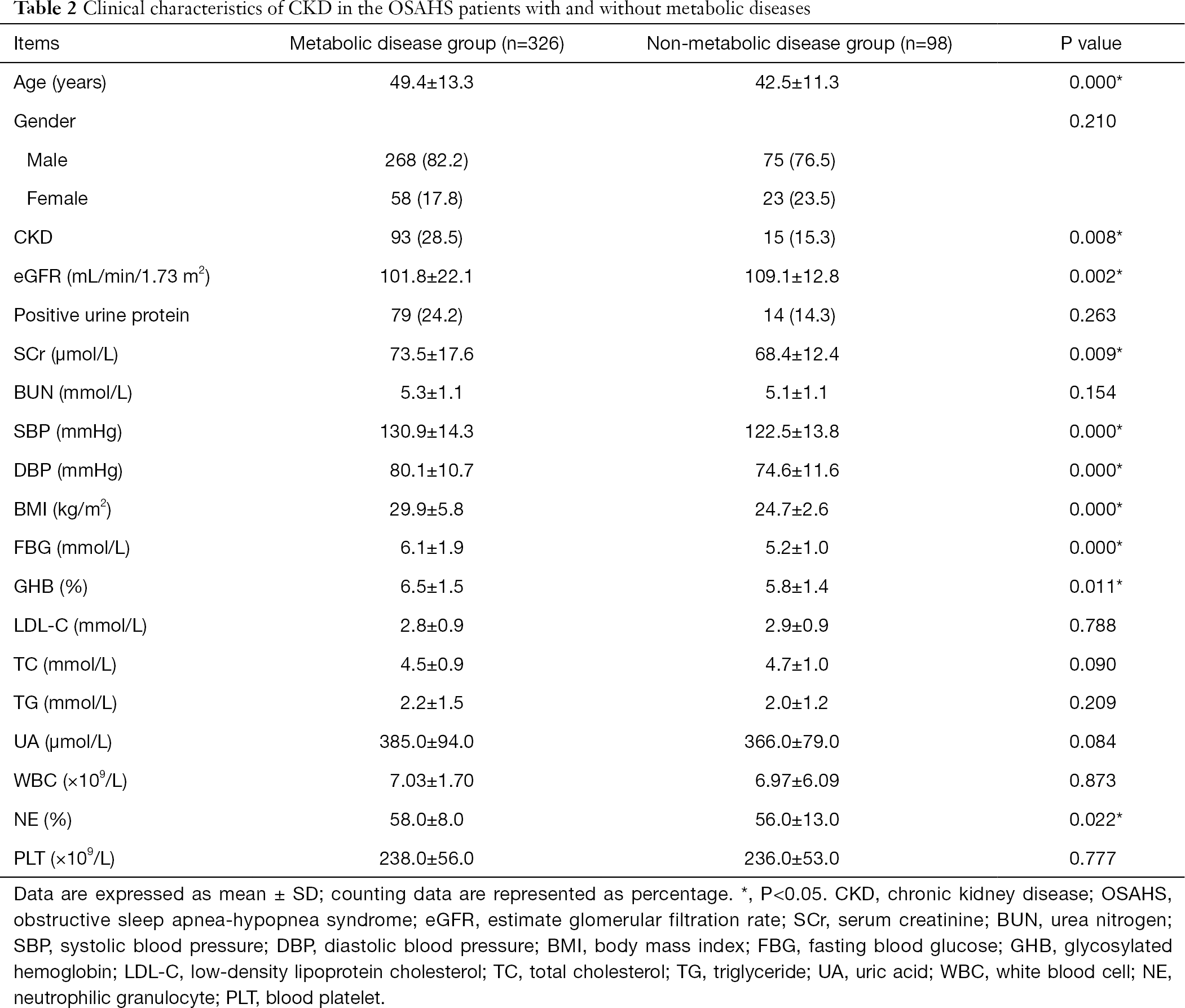 Risk factors of CKD in OSAHS patients by univariate analysis

The above findings suggest that not only AHI, LaSO2, ODI were significantly related to eGFR, but also BMI, SBP, FBG and LDL-C did. According to the AHI, OSAHS patients with or without metabolic disease were subdivided into mild to moderate group (AHI =5–30 times/h) and severe group (AHI >30 times/h). The prevalence of CKD, urinary protein, eGFR and metabolic diseases were compared between two groups. Results are shown in Tables 8,9. There was no significant difference between mild to moderate OSAHS group and severe OSAHS group in patients without metabolic diseases as shown in univariate analysis. These results indicate that OSAHS alone and its severity are not risk factors for CKD. Metabolic diseases may become confounding factors. 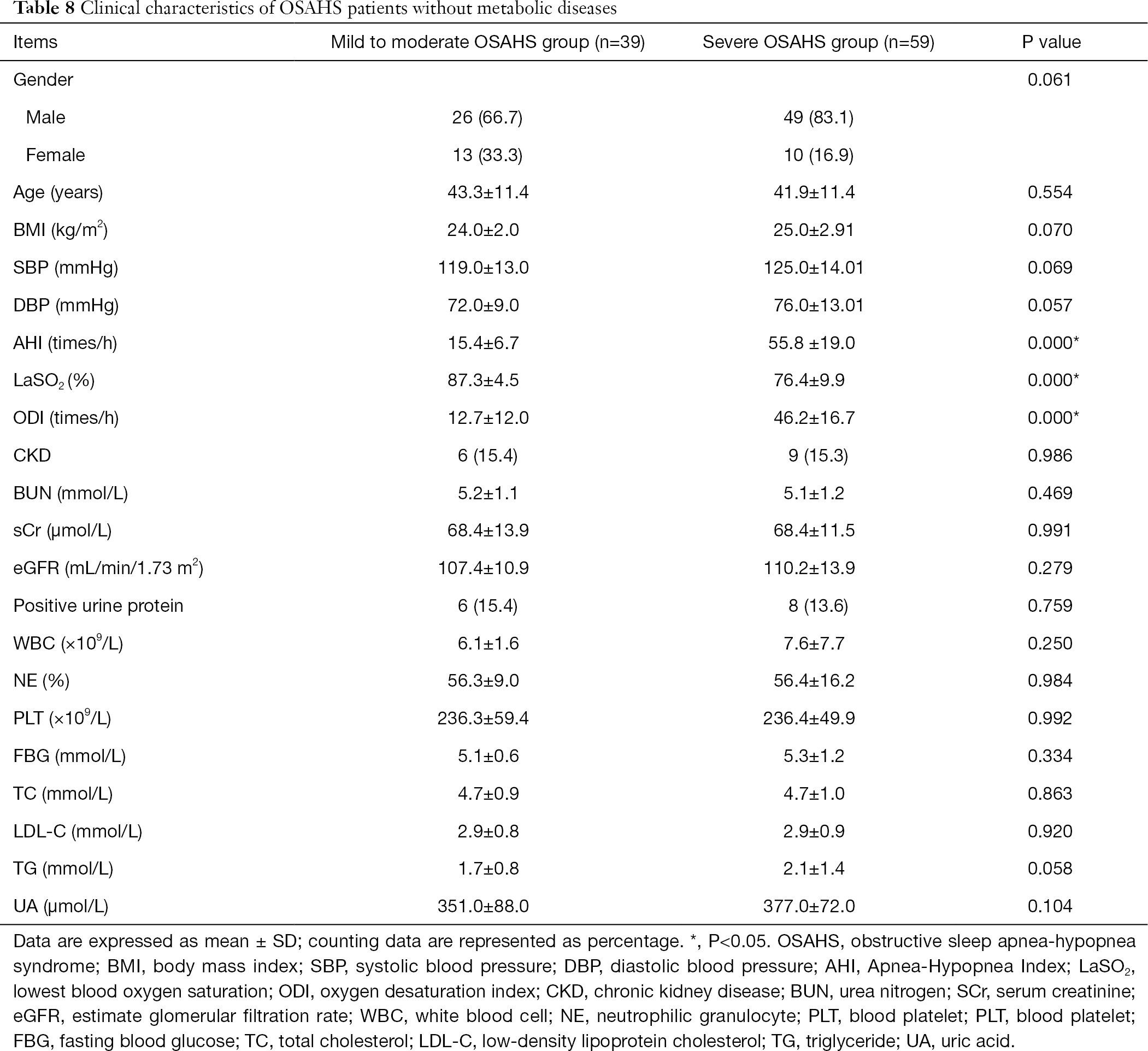 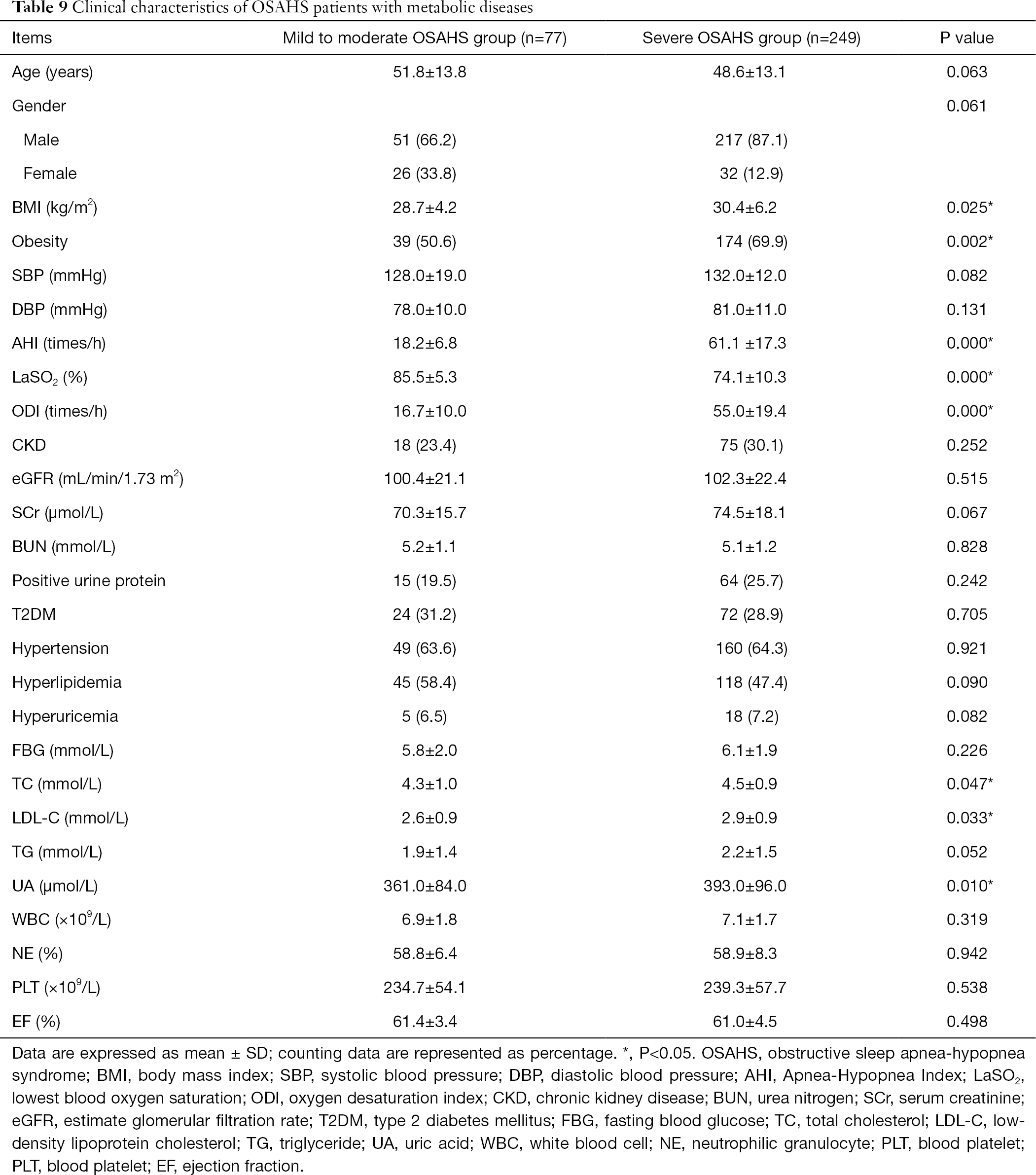 Based on the above results, further adjustment for confounding factors was performed in the multiple linear regression analysis, aiming to investigate the relationship of eGFR and OSAHS with metabolic diseases. The correlation between OSAHS and eGFR was assessed in 326 OSAHS patients with metabolic diseases. eGFR as a dependent variable, and age, metabolic related factors and PSG parameters as independent variables were integrated into the multiple linear regression model with stepwise method. The results are shown in Table 10. AHI (P=0.022), LaSO2 (P=0.012), ODI (P=0.021) and SBP (P=0.031) had significant effects on the eGFR.

The independent risk factors of CKD were assessed in 424 OSAHS patients by using binary Logistic multivariate regression analysis after adjustment for confounding factors. CKD served as a dependent variable. Age, gender, and metabolic diseases (obesity, hypertension, T2DM, hyperlipidemia and hyperuricemia) served as independent variables in the binary Logistic regression model. The results are shown in Table 11. OSAHS with T2DM was an independent risk factor for CKD [P=0.045, odds ratio (OR) =0.566, 95% confidence interval (CI): 0.324–0.989]. The prevalence of CKD in OSAHS patients with T2DM combined with other 1–4 metabolic diseases was 25.0%, 34.4%, 43.2% and 66.7%, respectively. The prevalence of CKD increased with the number of metabolic diseases.

The prevalence of CKD is about 10.8% in China (10). Metabolic diseases such as diabetes and obesity may accelerate the progression of CKD. With the increasing awareness of sleep-related symptoms such as daytime sleepiness and snoring, OSAHS has been timely diagnosed and treated. At the same time, CKD is gradually observed in those patients. The evidence shows that OSAHS is associated with CKD, but there is certain selection bias in available studies. The correlation between OSAHS and CKD is still inconclusive as there are many confounding risks factors. In the present retrospective study, metabolic diseases and CKD were investigated in the OSAHS patients, the correlation between OSAHS and CKD was assessed, and the influence of metabolic diseases was discussed, which may provide evidence on the early prevention, diagnosis and treatment of OSAHS and active control and/or delay of complications (including CKD).

Iseki et al. (11) investigated 1,624 patients with sleep-breathing disorder, and their results showed the prevalence of CKD was 3 times higher than that in the control group (30.5% vs. 9.1%). A follow-up cohort study of large population in Taiwan showed that the risk ratio of CKD in 4,319 patients with obstructive sleep apnea (OSA) was 1.37 (95% CI: 1.05–1.77) within 10 years and CKD occurred 2.5 months earlier than that in healthy population after excluding hypertension and T2DM. Chou et al. (12) also found a significant correlation between the severity of OSA and the renal injury in non-diabetic and hypertensive patients. However, Canales et al. (13) failed to find out renal dysfunction in patients with sleep-disordered breathing. Lee et al. (14) showed that OSA was a risk factor for CKD only in the presence of metabolic syndrome. Although there is correlation between OSAHS and CKD to a certain extent, metabolic diseases such as obesity, hypertension, T2DM, hyperlipidemia and hyperuricemia may also affect this association. Of note, metabolic diseases and other interfering factors are not excluded in many studies. Our study confirmed that OSAHS comorbid with metabolic diseases might be a risk factor for CKD, and OSAHS itself might not be an independent risk factor for CKD, which is consistent with previous findings (14), but more studies are needed to confirm this finding.

In the present study, the eGFR in OSAHS patients with metabolic diseases, regardless of obesity, T2DM, hypertension, hyperlipidemia and hyperuricemia, was positively related to AHI, and negatively related to ODI and LaSO2. This might be explained as the hypoxia induced renal dysfunction, oxidative stress, increased autonomic nerve excitability, and increased compensation of glomerular filtration function after rein-angiotensin-aldosterone system (RAAS) activation, which is consistent with the theory of glomerular hyperfiltration. When the dilation of afferent arterioles increases the blood flow to the kidney, the glomerular capillary pressure gradually increases, and the long-term renal hypertension results in glomerular sclerosis and increases protein load. In patients with sleep-disordered breathing, nocturnal hypoxemia may stimulate chronic inflammation and fibrosis in the renal interstitial, causing CKD. Chou et al. (12) recruited 40 habitual snoring subjects without diabetes, hypertension and other basic diseases. AHI, ratio of eGFR and urinary albumin/creatinine (ACR) were monitored. The results showed AHI was positively related to ACR and eGFR. However, most studies have concluded that eGFR decreases gradually with the aggravation of OSAHS or AHI. Ahmed et al. (15) followed up 858 patients with no history of CKD and with suspected sleep apnea for an average 2.1 years, and results showed nocturnal hypoxia in 44% of the patients and eGFR decrement of >4 mL/min/1.73 m2 (equivalent to normal 2–4 times) in 5.7% of patients after adjustment for the respiratory disturbance index, age, BMI, diabetes, heart failure, showing a significant correlation, OR =2.89 (95% CI: 1.25–6.67). It is suggested that night hypoxia is independently associated with the decline in renal function. The abnormal increase of eGFR in OSAHS patients at the early stage of kidney disease is a compensation for renal filtration. More attention should be paid to this pathology, and the influence of metabolic diseases cannot be ignored. In this study, long-term follow-up of OSAHS patients is still required to investigate the trend of renal function, and regular monitoring of renal function and urinary protein is helpful for the early identification of CKD in OSAHS patients.

The main pathophysiology of OSAHS is chronic intermittent hypoxia at night, recurrent hypoxia, hypercapnia and sleep disruption. In this study, OSAHS patients with metabolic diseases were further assessed, and results showed OSAHS alone was not an independent risk factor for CKD. Diabetes played an important role in the relationship between OSAHS and CKD. Duo to the existence of diabetes, the incidence of CKD gradually increased with the accumulation of other metabolic diseases. Liyori et al. (18) investigated thin mice exposed to intermittent hypoxia and found that liver glycogen output did not decrease, while insulin sensitivity and skeletal muscle utilization of blood glucose decreased, confirming that intermittent hypoxia is an independent factor of insulin resistance after excluding obesity. The mechanism by which OSAHS can cause and aggravate glucose metabolism disorders is mainly due to the high sympathetic nervous activation in the OSAHS patients. Intermittent hypoxia during sleep induces chronic systemic inflammatory responses, and inflammatory mediators lead to impaired insulin signaling and abnormal glucose tolerance. Sleep deprivation can directly cause glucose metabolism disorder.

Therefore, OSAHS comorbid with diabetes is very important for the occurrence of CKD and may accelerate the procession of CKD. In OSAHS patients comorbid with diabetes, accumulation of other metabolic diseases promotes renal damage. More studies are warranted to confirm our findings in the future.

This study was a single-center study, and subjects were inpatients from sleep centers. Most of them were diagnosed with severe OSAHS. Also, it was a retrospective study and the urinary protein content was only qualitatively analyzed. The sample size is small in the simple snoring group due to the lack of hospitalization data.

Conflicts of Interest: All authors have completed the ICMJE uniform disclosure form (available at http://dx.doi.org/10.21037/apm.2020.03.21). The authors have no conflicts of interest to declare.

Ethical Statement: The authors are accountable for all aspects of the work in ensuring that questions related to the accuracy or integrity of any part of the work are appropriately investigated and resolved. The study was approved by Beijing Tsinghua Changgung Hospital (No. 20119-0-01) and written informed consent was obtained from all patients.