Intrahepatic cholangiocarcinoma (ICC) is a highly malignant disease characterized by insidious onset, rapid progression, no opportunity for radical resection, and poor prognosis (1,2). For inoperable advanced ICC, sintilimab injection [programmed cell death-1 (PD-1)] combined with chemotherapy may have significant treatment potential. In this article we describe the application of PD-1 in treating a patient with advanced ICC. The efficacy and toxicities were similar to those reported in the Opdivo and Keytruda studies. Partial remission (PR) was achieved, along with a decreased pain score and significantly improved quality of life. It is hoped that such drugs can bring new hope to patients with similar tumors.

The patient was a 63-year-old woman with a body mass index (BMI) of 18.36. Her main symptom was lower back pain that affected sleep, and this discomfort had lasted for about 1 month. The patient had a history of hypertension for 6 months, which was treated with nifedipine extended-release tablets 30 mg td. She denied any history of coronary heart disease or diabetes. Also, she had no history of infectious disease such as hepatitis or tuberculosis, no history of blood transfusion or food/drug allergy, and no history of smoking or alcoholism. There was also no family history of genetic disease.

In February 2018, the patient began to experience abdominal cramps after eating, and the condition gradually worsened. On July 15, 2018, magnetic resonance imaging (MRI) of the upper abdomen showed that the intrahepatic bile ducts (especially the left intrahepatic bile duct) were dilated and the bile duct wall at the porta hepatis was thickened; multiple enlarged lymph nodes were seen in the hilar region and retroperitoneum. On July 16, 2018, laparoscopic lymph node biopsy was performed in our center. On July 23, 2018, pathology revealed metastatic adenocarcinoma in the lymph nodes, and the primary lesion was searched through the biliary system (Figure 1). After 2 consultations in the Department of Pathology of Jiangsu Cancer Hospital and the Bayi Hospital of the People’s Liberation Army, a diagnosis of ICC was confirmed. On July 28, 2018, immunohistochemical pathology showed the following tumor cell composition: (No. 12P lymph nodes) KI-67 (60% +), TTF-1 (−), CEA (3+), CDX2 (+), CK20 (−), CK7 (3+), NapsinA (−), Villin (3+), CK8/18 (3+), CK19 (3+), ER (−), PR (−), CA125 (+), PAX8 (−), CK-pan (3+), and WT-1 (−). She received gemcitabine + oxaliplatin (GEMOX) chemotherapy for 4 cycles from August 30, 2018 to October 31, 2018, and then her condition was evaluated by computed tomography (CT) on November 11, 2018. She received paclitaxel (with albumin) injection for 4 cycles from November 24, 2018 to January 10, 2019; on January 23, 2019, a second CT scan was performed, during which THE right femoral metastasis was found. However, since the patient had poor physical status, she could not endure the radiotherapy for metastases in the retroperitoneal lymph nodes and left adrenal glands; instead, she only received low-dose oral chemotherapy with tegafur-gimeracil-oteracil potassium capsules (S-1) 20 mg qd. On February 5, 2019, the patient fell while walking and suffered from a pathological fracture of the right femur. On February 11, 2019, she underwent open reduction and internal fixation (ORIF) of the right femoral shaft fracture; as a result, the monotherapy with S-1 was terminated. 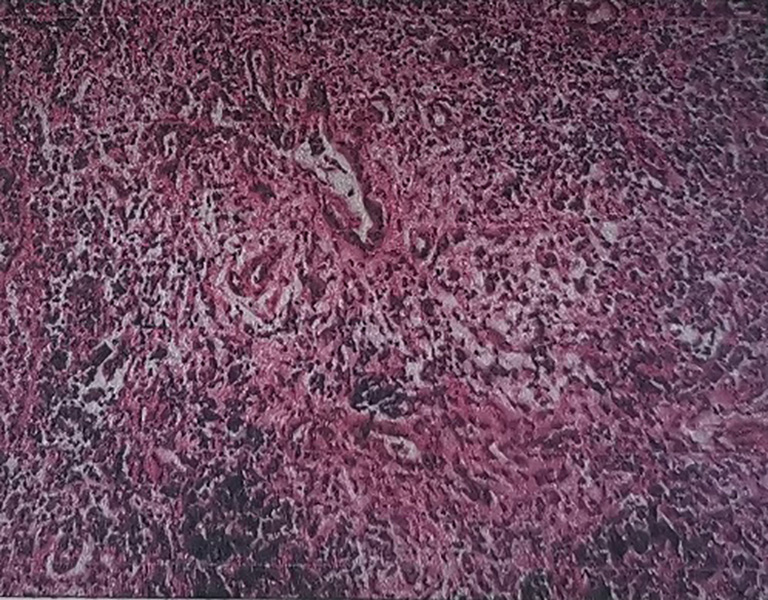 The patient was transferred from the Department of Orthopedics to our department on March 12, 2019, during which she had an Eastern Cooperative Oncology Group (ECOG) score of 3 points and a Numeric Rating Scale (NRS) pain score of 5 points. Physical examination showed that there was an 8-cm surgical scar on the skin of the right lower extremity, which healed well. Her abdomen was soft, with mild tenderness in the left upper abdomen. On March 13, 2019, the serum level of CA19-9 was up to 2,262.00 U/mL (the reference range is less than 39 U/mL). CT on March 13, 2019, revealed the presence of ICC, which was accompanied by metastases in the small omentum and retroperitoneal lymph nodes. The intrahepatic bile ducts were dilated, while the intrahepatic bile duct walls at the porta hepatis were thickened; multiple masses were found in the hilar region and retroperitoneum and involved the head of the pancreas; the tumors were surrounded by adjacent blood vessels, with the largest area 6.5 cm × 9.7 cm in size. A hypodense shadow about 1.5 cm × 2.5 cm in size was found in the right posterior hepatic lobe. The tumor also invaded the left adrenal gland. The right femur changed after surgery (Figure 2A). 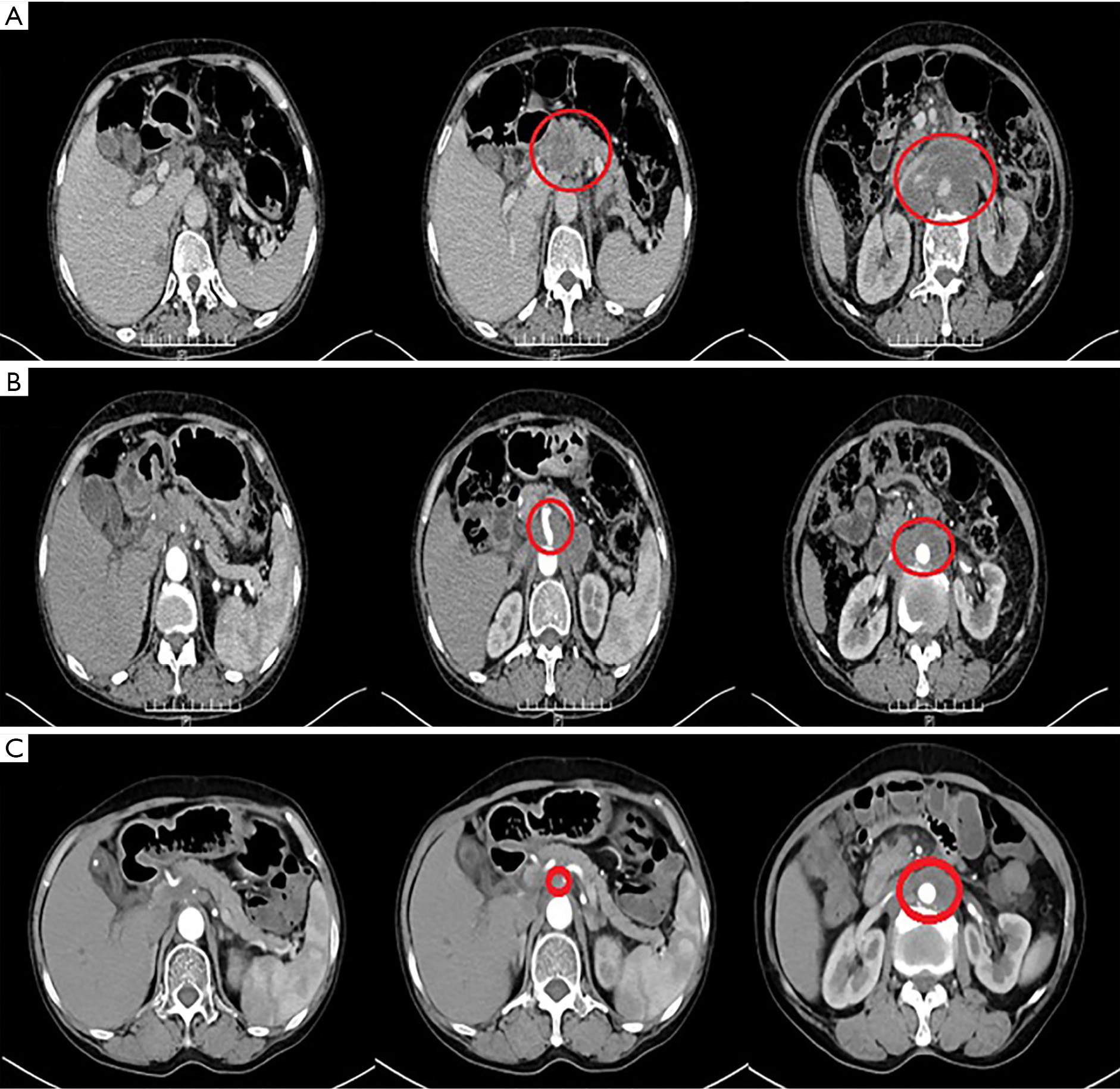 The treatments were well tolerated, and no obvious adverse reactions occurred. The patient is still following the current treatment protocol and has the opportunity to receive radiotherapy for the hilar area, retroperitoneal mass, and left adrenal gland.

On March 12, 2019, the patient had dull pain in the upper abdomen and lower back, with an NRS pain score of 5 points, which was treated by oral oxycodone extended-release tablets 30 mg po q12h and celecoxib 100 mg po q12h. The pain was alleviated after the treatment. On May 15, 2019, the NRS score decreased to 2 points, and the oral pain medication was changed to oxycodone extended-release tablets 20 mg po q12h. On August 17, 2019, the patient has no pain (the NRS score was 0), and the analgesic treatment was discontinued. The patient had a right femur metastasis, which was treated with zoledronic acid 5 mg ivgtt q3w to inhibit bone destruction. The hypertension was managed with nifedipine extended-release tablets 30 mg pd.

ICC is a malignant tumor arising from the peripheral biliary system (including the second-order bile ducts). It accounts for 5% to 30% of primary liver cancer and 5% of the biliary epithelial malignancies, with poorly identified etiologies (3,4). As a rare malignancy, ICC has no specific clinical manifestations and responds poorly to radiotherapy and chemotherapy. Its prognosis is extremely poor (5). The median survival of non-surgical patients is only 9 months, which may be explained by the presence of intrahepatic or extrahepatic metastasis in most patients when the disease is confirmed. Systemic chemotherapy is only used as a palliative treatment for patients with advanced ICC. Currently, the commonly used chemotherapy drugs for ICC include gemcitabine, 5-fluorouracil, capecitabine, cisplatin, oxaliplatin, and pirarubicin (6-8). In our current case, the patient had poor physical status and refused to receive radiotherapy, and thus chemotherapy was the only option. However, the value of chemotherapy in inoperable ICC is still unclear. Since ICC is poorly differentiated and has poor response to chemotherapy, the effectiveness of chemotherapy is typically low for ICC (9). Studies have shown that gemcitabine was effective in treating malignant biliary tract tumors (10), and the median survival of bile duct cancer treated with gemcitabine + cisplatin reached 11.7 months (11). TS-1 contains tegafur, a prodrug of 5-fluorouracil (5-FU). At the Cancer Radiotherapy Center of the University of Tsukuba, Japan, a 78-year-old male ICC patient with stage IIIC (T3N1M0) ICC received proton beam therapy + oral TS-1 chemotherapy, and his tumor gradually disappeared and reached complete remission (12). In our current case, the patient had previously failed a GEMOX regimen and albumin/taxane chemotherapy. The only chemotherapeutic drug available for her was fluorouracil. Therefore, local treatment and multiple forms of combined treatment are important strategies for improving quality of life and prolonging survival in patients with inoperable advanced ICC. PD-1/programmed cell death1 ligand-1 (PD-L1) inhibitors have gradually been used to treat a variety of malignant tumors.

PD-1/PD-L1 are immune checkpoints that down-regulate T cell immune activity and participate in the immune escape of malignant tumor cells (13). In the tumor microenvironment, the PD-1/PD-L1 signaling pathway is abnormally expressed and the immune balance tends to be immunosuppressed, leading to tumor immune escape; as a result, the massive proliferation and differentiate of malignant cells eventually leads to oncogenesis (14). PD-1/PD-L1 inhibitors marketed abroad have achieved certain effectiveness in the treatment of various tumors. The PD-1/PD-L1 inhibitor atezolizumab has been licensed in the United States for non-small cell lung cancer (NSCLC) patients who have failed chemotherapy and targeted therapies. According to the ongoing KEYNOTE-028 trial, the long-term survival rate of SCLC patients treated with PD-1/PD-L1 inhibitor pemnrolizumab (Keytruda) alone reached 33.3% (15). In a study performed by Doi et al., 23 patients with advanced esophageal squamous cell carcinoma and lower esophageal adenocarcinoma received treatment with pembrolizumab, a highly selective humanized monoclonal antibody acting against PD-1, and the overall response rate (ORR) was 23% (n=5); the best response was stable disease in 18% (n=4) of cases and progressive disease in 59% (n=13) of cases (16). Nivolumab (Opdivo) can be used for the treatment of liver cancer (17), gastric cancer (18), metastatic NSCLC (19), and other indications such as unresectable or metastatic melanomas, melanoma requiring adjuvant therapy, renal cell carcinoma, head and neck squamous cell carcinoma, urothelial carcinoma, and metastatic DNA mismatch repair–deficient/microsatellite instability–high (dMMR/MSI-H) colorectal cancer. Sintilimab is a fully human anti-PD-1 antibody used for the immunotherapy of tumors. Similar to the PD-1 inhibitors (e.g., nivolumab and pembrolizumab) that have been marketed abroad, sintilimab is also an immunoglobulin G4 monoclonal antibody. The main adverse reactions of sintilimab include fatigue, diarrhea, pneumonia, dyspnea, and infusion reactions, which can be tolerated by most patients.

CA19-9 is a mucin-type glycoprotein that is mainly used in the diagnosis and monitoring of malignant GI tumors such as pancreatic cancer, bile duct carcinoma, and liver cancer (20). Liao et al. (21) found that AFP and CA19-9 were effective serum markers for ICC; CA19-9, in particular, demonstrated a high diagnostic value in patients with low AFP expression. A recent study revealed that a change of CA19-9 level was closely associated with lymph node metastasis and the recurrence of tumors, and was an independent predictor of prognosis for ICC patients (22). CA19-9 monitoring is helpful for learning the control of tumors and predicting the prognosis in ICC patients.

In our current case, the patient had a large tumor burden and poor physical status before the initiation of treatment, along with an ECOG score of 3 points and an NRS cancer pain score of 5 points. The patient refused to receive radiotherapy and high-intensity multi-drug chemotherapy and insisted that she could only tolerate single-drug chemotherapy. She also requested tumor immunotherapy. After 6 consecutive cycles of treatment with PD-1 combined with S-1, the patient's physical status was improved, with an alleviation of pain and a significantly improved quality of life. Thus, she received the opportunity for subsequent radiotherapy, and the treatment during this period was successful. Although this is a single case, despite its rarity, the possibility that PD-1 may effectively fight against advanced ICC cannot be discounted. Therefore, the efficacy of PD-1 combined with chemotherapy in treating similar patients warrants further investigation. It is believed that tumor immunotherapy will benefit more tumor patients as more knowledge is gained from new clinical trials and more progress in new technologies is made.

We thank Professor Xinyu Xu from Jiangsu Cancer Hospital for helping confirm the patient's histological diagnosis. Also, we would like to thank Dr. Feng Xu from the Department of Radiology, the First People’s Hospital of Suqian City, for evaluating the imaging results.