Acceptance principle: (I) the study obtained the consent of the hospital ethics committee and the patient’s family members, and the patient’s family members signed the relevant informed consent with the hospital voluntarily, (II) all patients were diagnosed as hypertensive cerebral hemorrhage by CT, (III) the patient has a history of hypertension, (IV) in accordance with the indications of stereotactic soft channel puncture and drainage, (V) follow up for half a year.

Brain CT examination was performed before operation, and general anesthesia was given to patients with tracheal intubation. The approach of operation was frontotemporal top of hematoma side. After the formation of bone flap, the dura mater was suspended and opened, and the arachnoid membrane of lateral fissure was separated to the completely exposed guide vane. Hematoma was punctured by brain puncture needle, and then the hematoma was entered along the puncture channel and sucked out by suction device. In this process, it is not allowed to forcibly scrape off the small blood clots and hematoma wall at the bottom to avoid further bleeding. The hematoma was cleaned with normal saline, the drainage tube was left after the liquid was clear, and the skull was closed.

Before operation, CT examination was performed to identify the hematoma site. After local anesthesia, the projection area of the scalp at the largest level of the hematoma was used as the puncture point, avoiding important functional areas and large blood vessels. The syringe with drainage device was inserted into the hematoma cavity from the bone hole with a vertical long axis or according to the long axis of the hematoma. The core of the needle was pulled out after the blood was found with the aid of silica gel tube. Push the drainage tube 1–3 cm and fix it. After aspirating hematoma, connect tee head to maintain drainage. Brain CT was reexamined 24 hours after the operation. Normal saline and urokinase were injected according to the amount of residual hematoma. The catheter was removed within 5–10 days after the operation.

The degree of neurological deficit in stroke (China Stroke Scale, CSS) was evaluated. The total score of the scale is 45 points, 0 point is regarded as no defect, 0–15 points as light defect, 16–30 points as moderate defect, 31–45 points as severe defect (14).

The volume of hematoma was measured before treatment, 1 week, 2 weeks and 4 weeks after treatment.

The indexes of cellular immunity were detected, including the rate of CD3+ and CD8+ cells. In the morning, 2 mL of elbow vein blood was taken from the patients with fasting ≥8 h, heparin anticoagulation was added, and the detection was completed within 24 h after collection. Take the flow tube, add 10 µL of monoclonal antibody, then add 100 µL of peripheral blood to mix well, place it away from light at room temperature for 20 min, add 2 mL of hemolysin, and place it at room temperature for 20 min. Centrifugation, discard the supernatant, add 2 mL PBS for washing. Centrifugation, discard the supernatant, and then suspend it in 500 µL PBS again. The cytomics FC500 flow cytometer from Beckman Coulter company was used for detection, and the CXP analysis software was used for analysis (16).

The complications of the two groups were analyzed through counting the incidence of complications, such as lung infection, urinary tract infection, liver and kidney dysfunction.

Analysis of therapeutic effect of two groups of patients

The total effective rate of the study group was 96.67%, which was significantly higher than that of the routine group (80.00%). The difference is statistically significant (P<0.05) (Table 1).

Before treatment, there was no significant difference in hematoma volume between the two groups (P>0.05). After 1, 2 and 4 weeks of treatment, the volume of hematoma in the two groups decreased, and the volume of hematoma in the study group was significantly less than that in the routine group, the difference was statistically significant (P<0.05) (Table 3). Figure 1 represents the brain CT scanning map for patients with hypertensive cerebral hemorrhage preoperative and postoperative. 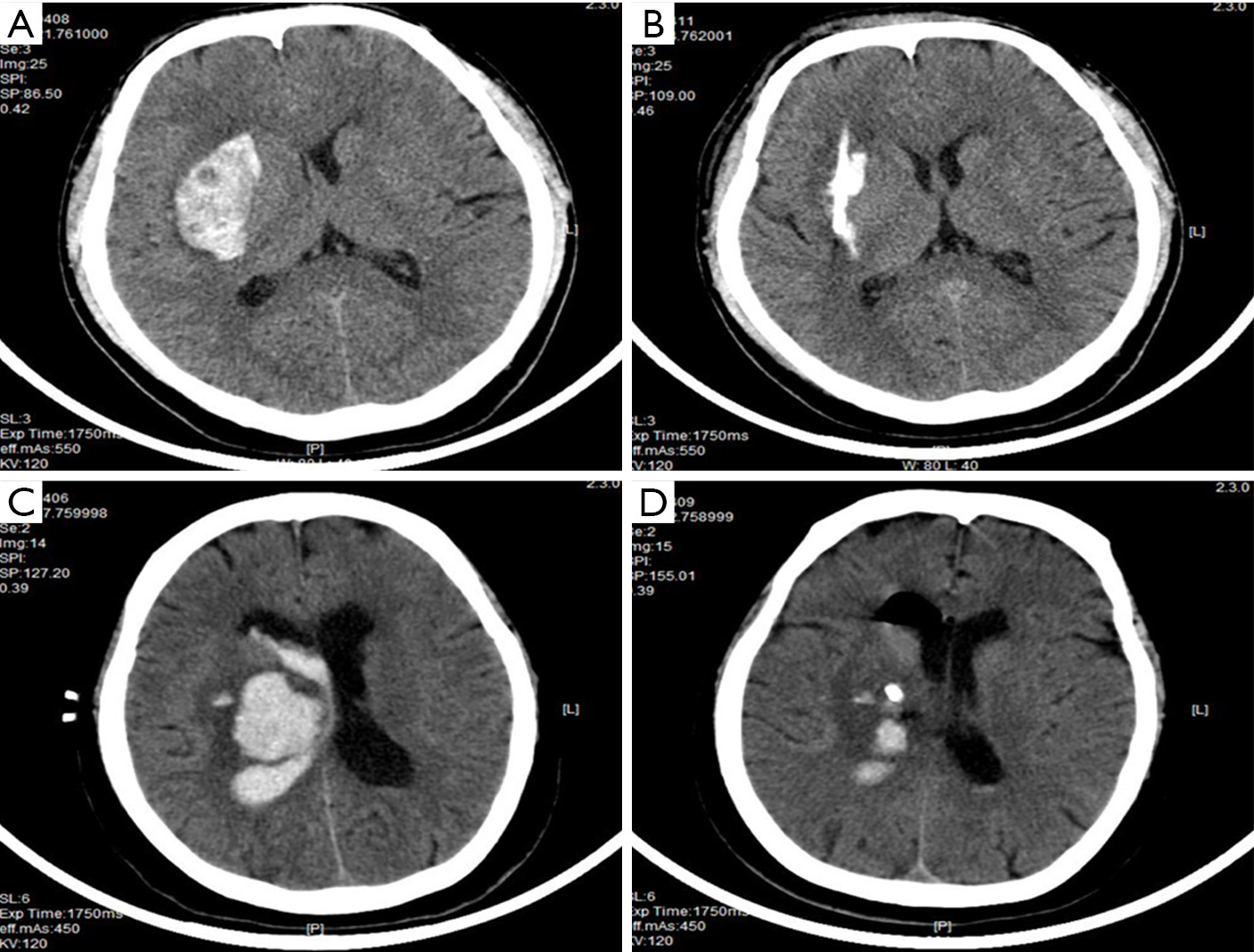 The incidence of postoperative complications such as pulmonary infection, urinary tract infection, liver and kidney dysfunction in the study group was significantly lower than that in the routine group (P<0.05) (Table 5).

In conclusion, stereotactic soft channel puncture and drainage has many advantages. The treatment of hypertensive intracerebral hemorrhage with this method can promote the recovery of neurological function, improve the independent living standard and effectively improve the prognosis, which is worthy of clinical use.

Ethical Statement: The authors are accountable for all aspects of the work in ensuring that questions related to the accuracy or integrity of any part of the work are appropriately investigated and resolved. The study was approved by ethics board of Funing People’s Hospital (No. 2019009).