Diabetes mellitus has become an important public health concern throughout the world because of the sedentary lifestyle and the increasing aging population. Diabetes mellitus is the ninth major cause of death (1), and over 90% of diabetes mellitus cases are type 2 diabetes mellitus (T2DM) (2). What is more, the incidence of T2DM is increasing at a rapid rate (3). T2DM is characterized by insulin resistance, abnormal insulin secretion, or both (4). T2DM may increase the risk of various diseases, including cardiovascular disease and cerebrovascular disease (5,6). Weight control, diet, and oral medications are regular treatments for T2DM (7). However, the existing treatments are lacking long-term effective blood glucose control; a more effective therapeutic strategy needs to be found.

MicroRNAs (miRNAs) are non-coding RNAs that can regulate gene expression. MiR-21 is located on chromosome 17q23-2, and it is an important member of miRNAs (8). Mir-21 is overexpressed in almost all human tumors and plays an important role in the proliferation (9), apoptosis (10), and invasion (11). Besides, miRNAs are involved in various pathogenesis of diabetes and related microvascular and macrovascular complications (12). Meanwhile, inhibition of miR-21 has been reported to be an effective therapy for diabetic nephropathy (13). Nevertheless, the molecular mechanism of miR-21 in treating diabetes is unclear.

In the present study, we explored the effect of miR-21 antagomir on streptozotocin (STZ)-induced T2DM rats. We proved that miR-21 antagomir improved insulin resistance and lipid metabolism disorder in STZ-induced D2TM rats by the up-regulation of tissue inhibitor of metalloproteinases 3 (TIMP3). This study may supply experimental data for the mechanism of miR-21 antagomir in the treatment of T2DM.

Male Sprague-Dawley (SD) rats about 230–250 g were bought from the Shanghai Laboratory Animal Center, Chinese Academy of Sciences (Shanghai, China). The animals were supported in a room with a standardized condition (23±1 °C, 45–55% humidity, 12 h light/dark cycle). Rats were acclimatized for 7 days with free access to water and standard rat nutrients before the experiments. All experiments and protocols were performed according to the guidelines of Animal Use and Care of the National Institutes of Health (NIH).

One hundred and eighty SD rats were randomly divided into two groups: one group of 40 rats was fed a regular diet (healthy group). The other group of 140 rats was fed with a high-fat diet (HFD), HFD consisted of 41% fat, 41% carbohydrate, and 18% protein (T2DM group). After 4 weeks, the T2DM group was intravenously injected with STZ (40 mg/kg) once. STZ was dissolved in 0.01 M sodium citrate (pH adjusted to 4.5). Then blood was collected from the tail vein, and blood glucose was measured in all groups.

HEK (human embryonic kidney) 239 cell was bought from the Cell Bank of Shanghai Institute for Biological Sciences, Chinese Academy of Sciences. The miR-21 mimic and NC mimic were synthesized by GenePharma Company (Shanghai, China). The sequence of si-TIMP3 and si-NC were designed with the BLOCK‐iT™ RNAi Designer (Invitrogen). Transfection of the miR-21 mimics, NC mimic, si-TIMP3, or si-NC was performed by ribo-FECT™ CP Transfection Kit (Ribo, Guangzhou, China) according to the manufacturer’s protocol.

The primary anti-TIMP3 was bought from Abcam (Cambridge, UK). Cells with different treatments were cultured for 48 hours and lysed with RIPA lysis buffer. A BCA kit (Pierce, Rockford, IL, USA) was used to determine the total protein concentration. An equal amount of protein was isolated by SDS-PAGE and transferred to polyvinylidene difluoride (PVDF) membranes (Bio-Rad, Hercules, CA, USA). The membranes were blocked by 5% non-fat dry milk and incubated with anti-TIMP3 overnight at 4 °C. Then the membrane was washed by TBST buffer and subjected to the secondary antibody. The blot was detected by an ECL detection kit (Pierce, Rockford, IL, USA). GAPDH was used as a loading control. 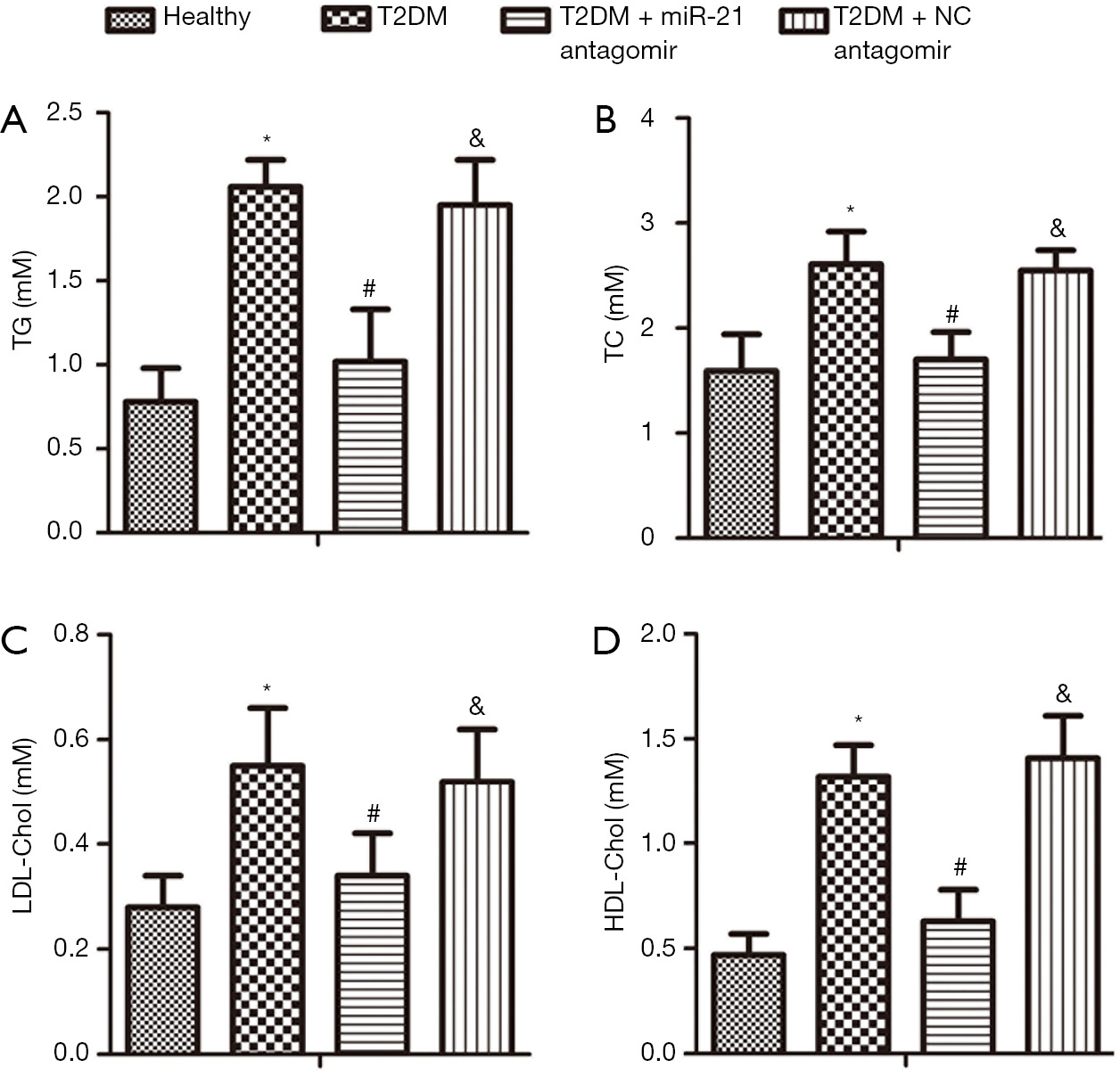 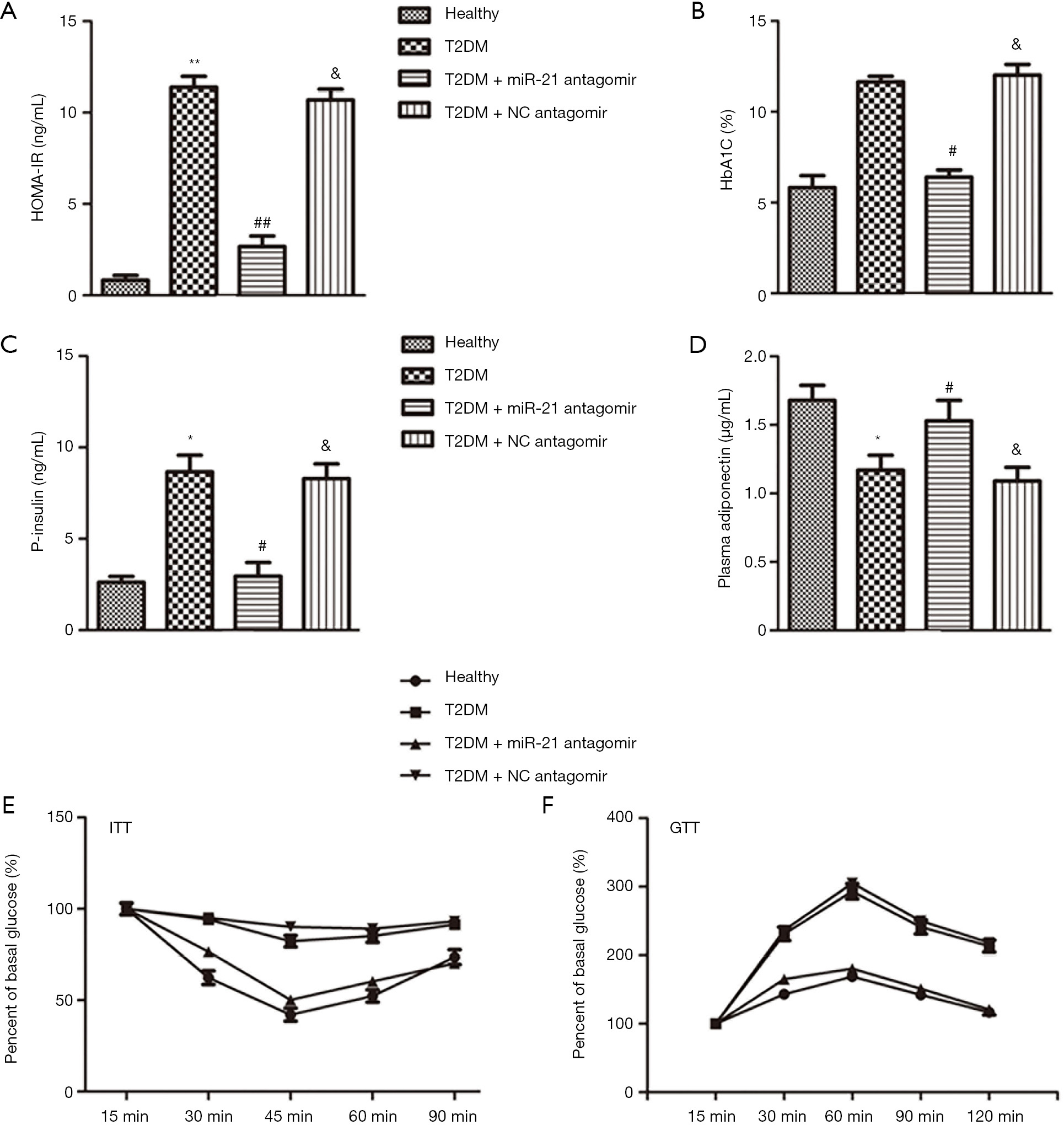 TIMP3 was a direct target of miR-21

The targeted relationship between miR-21 and TIMP3 was predicted by bioinformatics (Figure 4A). HEK239 cells were used for the later experiments. The miR-21 mimic and NC mimic were transfected into HEK239 cells. The expression level of miR-21 was dramatically increased by miR-21 mimic compared to the control group (Figure 4B). The result of a luciferase activity assay was shown in Figure 4C. Compared to cells co-transfected with TIMP3-WT and NC mimic, TIMP3-MUT and miR-21 mimic, TIMP3-MUT, and NC mimic, the luciferase activity was significantly decreased in the cells co-transfected with TIMP3-WT and miR-21 mimic. This result revealed that TIMP3 was a direct target of miR-21. 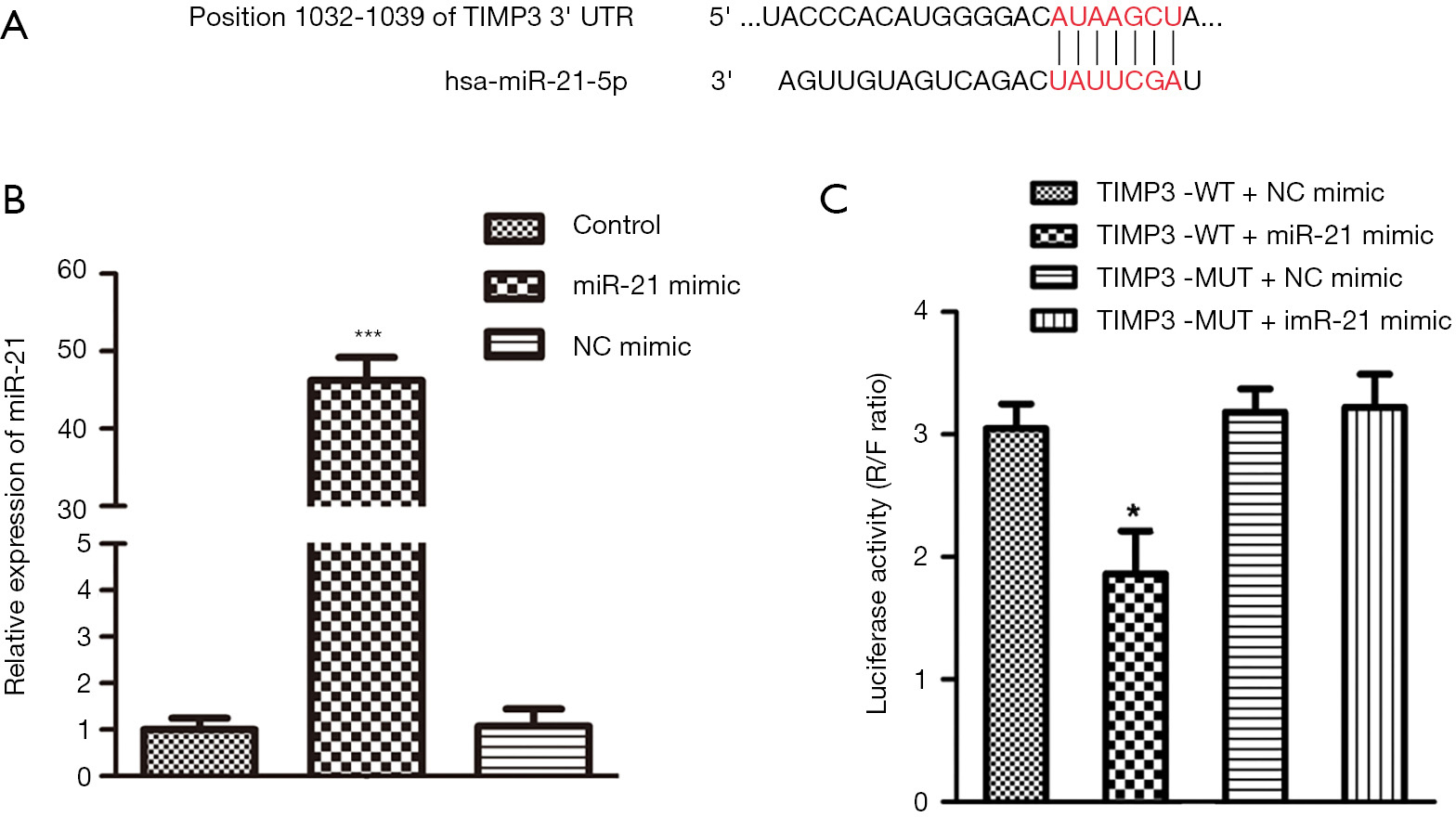 Figure 4 TIMP3 was a direct target of miR-21. (A) The targeting sequences of HIMP3 with miR-21 analyzed by bioinformatics; (B) the expression level of miR-21 was measured by RT-PCR; (C) the statistical analysis of luciferase activity assay. **, P<0.01 compared with the healthy group; ***, P<0.001 compared with the healthy group. TIMP3, tissue inhibitor of metalloproteinases 3; RT-PCR, real-time PCR. 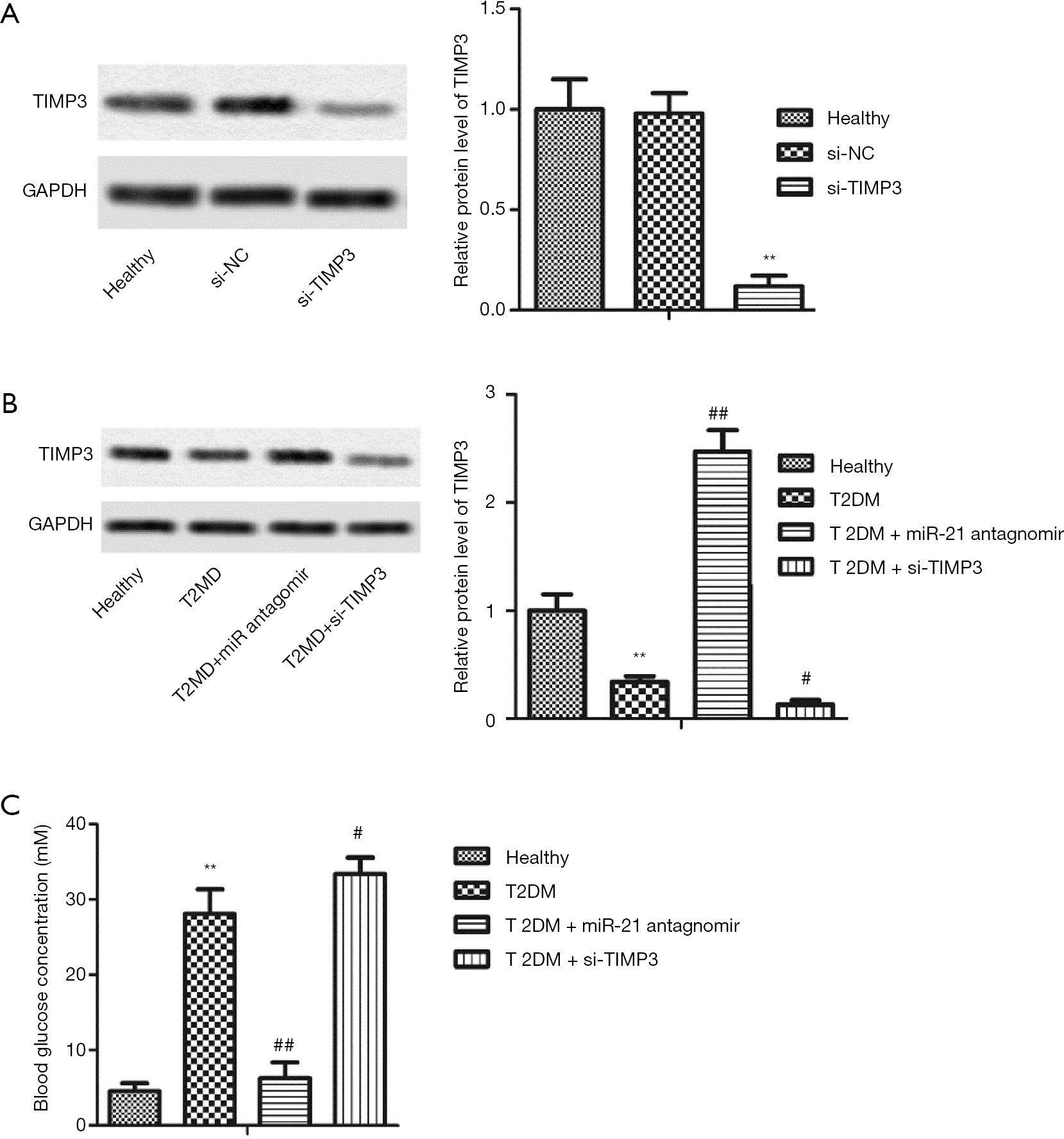 T2DM has become a worldwide health concern. Due to its significant morbidity and mortality, the current incidence of T2DM is 9%, and it will get higher in the future (20). Current treatments cannot supply long-term effective blood glucose control. Hence, it is urgently needed to improve an effective therapeutic strategy for T2DM.

MiR-21 has been reported to be associated with the injury caused by type 2 diabetes. In T2DM with diabetic retinopathy, the expression of miR-21 was relatively increased, and it was associated with the pathogenic process of diabetic retinopathy in T2DM (21). The previous study revealed that miR-21 overexpression was a pathogenic mechanism and a potential therapeutic target for diabetic retinopathy (22). Similarly, miR-21 was a key therapeutic target for renal injury in rats with T2DM (13). In the present study, we investigated the effects of miR-21 antagomir on STZ-induced T2DM rats. In T2DM rats, the expression of miR-21 and concentration of blood glucose was significantly increased. MiR-21 antagomir in T2DM rats reduced the expression of mir-21 as well as the concentration of blood glucose. This result showed that miR-21 antagomir could reduce blood glucose concentration in T2DM rats.

Lipid metabolic disorder is a primary pathological change in T2DM. Because of its long-term complications, some experts prefer to regard T2DM as “lipocentric” instead of “glucocentric” (23). TG and cholesterol are basic components of body lipids. Dyslipidemia is characterized by elevated TG, cholesterol, and associated lipoproteins (24). TG is a commonly measured component of lipid profiles, and it is related to the incidence of T2DM (25). In previous studies, significant rises in plasma TG and TC levels in T2DM were observed (26). Consistent with earlier studies, TG, and cholesterol levels in this study were also increased in T2DM. When the LDL-Cho level is too high in the blood, the cholesterol accumulates in the body and causes metabolic disorders. Therefore, the reduction of LDL-Cho has been recognized as one of the best treatments for lipid metabolism disorders (27). HDL-Cho is related to insulin secretion (28) and blood glucose levels. An elevated level of HDL-Cho could reduce the blood glucose level and down-regulation of HDL-Cho could increase the blood glucose level (29). In the present study, miR-21 antagomir down-regulated the contents of TG, TC, LDL-Cho, and up-regulated HDL-Cho. In summary, miR-21 antagomir improved lipid metabolic disorder in STZ-induced T2DM rats.

Insulin resistance is an early feature of the T2DM condition. Insulin resistance has been identified as an important risk factor for T2DM and has been reported to be associated with increased adverse events in T2DM patients (16). HOMA-IR was developed by Matthews et al. and has been widely used for the evaluation of insulin resistance (30). High HOMA-IR suggests low insulin sensitivity. Hyperglycemia, hyperinsulinemia, and increased glycation of hemoglobin are important symptoms of T2DM. So the test of HbA1c is a common diagnostic tool for T2DM management and research (31). Adiponectin is an adipose tissue-derived hormone, known to have insulin-sensitizing (32). It has been reported to decrease insulin resistance (33). ITT evaluates insulin sensitivity by monitoring fasting plasma glucose disappearance over time in response to an injection of insulin (34). GTT evaluates glucose tolerance by detecting the plasmatic glucose of the body of an injected glucose load (35). In the present study, miR-21 antagomir decreased the HOMA-IR, HbA1c, P-insulin, and increased the adiponectin in T2DM rats. Moreover, ITT and GTT results suggested higher insulin sensitivity and glucose tolerance regulated by miR-21 antagomir. In conclusion, miR-21 antagomir improved insulin resistance in STZ-induced T2DM rats.

Bioinformatics predicted the targeting relationship between TIMP3 and miR-21. TIMP are soluble proteins that interact with the protease to regulate the activity of metalloproteinases (36). TIMP3 is a unique member of the TIMP family and has been proved to inhibit the activity of various proteases and receptors (37). The relationship between miR-21 and TIMP3 has been revealed in several studies. In cumulus cells, miR-21 promotes cumulus expansion and oocyte maturation through down-regulating TIMP3 (38). In the ischemic retina, activation of miR-21 is involved in the down-regulation of TIMP3 (39). Consistent with the reports mentioned above, the result of the luciferase activity assay showed that TIMP3 was a direct target of miR-21 in T2DM rats, too.

TIMP3 is associated with pathological mechanisms in T2DM. It has been reported that TIMP3 was down-regulated in T2DM, and deficiency of TIMP3 was involved with insulin resistance and vascular inflammation (40). In atherosclerotic plaques subjects with T2DM, a decrease of TIMP3 expression increased the activity of inflammatory (41), which may promote atherothrombosis. MiR-21 played a key role in the development of tumors by different molecular mechanisms (42,43). In renal cancer, the carcinogenesis of miR-21 was found to be related to TIMP3 (44). In this study, TIMP3 was decreased in T2DM rats compared to the healthy rats. Si-TIMP3 increased blood glucose in T2DM rats compared to regular T2DM rats. Furthermore, miR-21 antagomir extremely increased the expression of TIMP3 while notably decreased the blood glucose concentration in T2DM rats. These pieces of evidence showed that miR-21 antagomir improved insulin resistance and lipid metabolism disorder by up-regulating the expression level of TIMP3.

Ethical Statement: The authors are accountable for all aspects of the work in ensuring that questions related to the accuracy or integrity of any part of the work are appropriately investigated and resolved. The Experimental Animal Ethics Committee of People’s Hospital of Dujiangyan, The People’s Hospital of Dujiangyan, ratified all the animal experiments in this study (SYXK2018-213). Procedures and protocols were performed in strict accordance to the Guide for the Care and Use of Laboratory Animals of the International Association for the Study of Pain (IASP).