Impact of knowledge, attitude, and practice (KAP)-based rehabilitation education on the KAP of patients with intervertebral disc herniation

Intervertebral disc herniation (IDH) is caused by degenerative changes in the lumbar disc structures, including the annulus fibrosus, cartilage plate, and nucleus pulposus. When external forces damage the annulus fibrosus, the nucleus pulposus will prolapse through a tear in the surrounding annulus fibrosus, compressing or stimulating the adjacent spinal nerve roots. IDH is a frequently occurring disease, and patients with IDH often suffer from back pain as well as unilateral or bilateral lower limb pain and numbness (1). The current clinical interventions for IDH include health education, exercise therapy, surgical treatment, traction therapy, and physical therapy. The clinical symptoms and spinal function may be improved through rehabilitation therapy in most patients, whereas only 10% to 20% of patients require surgery (2). Although non-surgical treatments have proved certain effectiveness in treating IDH, factors such as overwork and lack of physical exercise often lead to the recurrence of this disease. Furthermore, poor awareness and treatment compliance in patients often leads to prolonged treatment course, posing a serious impact on patients’ quality of life and work performance (3). IDH has increasingly been found in young adults, and the traditional health education modes have limited impact on the knowledge and behavior of these populations, which is not conducive to the output of positive behaviors (4). Since IDH is a recurrent condition with a prolonged disease course, enhanced patient education is required during the rehabilitation, and the effectiveness of rehabilitation should be improved and consolidated through knowledge, attitude, and practice (KAP)-based rehabilitation education. Therefore, this study explored the effectiveness of KAP-based rehabilitation education in IDH patients to provide new evidence for subsequent clinical interventions.

Totally 70 IDH patients undergoing conservative treatment in our center from February 2018 to December 2018 were equally and randomly divided into the KAP group and control group by using a table of random numbers. The inclusion criteria included: (I) meeting the diagnostic criteria for IDH in the Chinese Guidelines for the Diagnosis and Treatment of Bone Diseases (5); (II) confirmed by CT or MRI; (III) in the stage of acute remission or functional recovery and the disease could be treated conservatively (6); and (IV) with signed informed consent. The exclusion criteria included: (I) with disabling IDH or other conditions requiring surgery; (II) with incomplete information; (III) accompanied by neuropsychiatric diseases and the patient could not cooperate with intervention; (IV) with lumbar vertebrae bone damage or obvious osteoporosis confirmed by X-ray or other imaging examinations; and (V) with severe heart, liver and kidney dysfunction.

KAP group: the KAP-based rehabilitation education was offered. Firstly, a rehabilitation education group was established, with members including orthopedic surgeon (n=1), rehabilitation physician (n=1), psychological counselor (n=1), and nurses (n=5). Based on the specific features of the patients, the content of health education was decided, and a health education protocol was developed. Based on traditional health education, the KAP-based rehabilitation education was focused on: disease-related knowledge: (I) after admission, the patient’s awareness and knowledge about the disease features, treatments, and impact of bad behaviors on the disease were increased by centralized education, bedside guidance, and audio/video materials; (II) psychological counseling: after admission, the nursing team conducted a simple psychological evaluation on the patient to identify the psychological problems of the patient; subsequently, the nurses frequently communicated with the patient in a face-to-face manner to help the patient overcome the stress caused by IDH. The delivery of knowledge and the display of successful cases increased the patient’s confidence in the treatment and encouraged them to cooperate with the treatment protocols actively; (III) skill training: pain relief: the nurses use the Numeric Rating Scale (NRS) to assess the patient’s pain. Based on physical therapy, the patient was asked to sleep on a hard bed, which was placed with a 5–8 cm-thick cushion to increase comfort (7); the patient was guided to take a correct body position, with a pillow put under the knee joint and head, respectively, to raise the shoulders. Alternately, the patient was asked to take a lateral position, with the upper knee flexed; also, a pillow was placed between two knee joints for functional exercise (8). Functional exercise: short-term goals were set for the patient. The patients were guided to complete some simple actions including forward flexion and backward extension, left and right lateral flexions, left and right rotations, flying swallow-styled back muscle functional exercise, five-point-styled low back muscle exercise, and slow-step walking with support. Each item lasted 20 minutes. After an exercise plan was developed, the patient followed it under the supervision of family members. In addition, health education and psychological counseling were also provided to patients’ss families based on the KAP model.

After discharge, patients in both groups were followed up for 3 months. The follow-up methods included telephone and online platforms (e.g., WeChat or QQ).

Evaluation of the effectiveness

The self-designed questionnaire on the KAP of IDH included: a) demographic data including age, gender, occupation, and socioeconomic status; survey on the KAP of IDH including three dimensions (i.e., knowledge, attitude, and unhealthy behaviors) consisting of 9 items in total (3 items for each dimension) (9,10). These items were scored according to the following criteria: (I) for the “Knowledge” dimension, two answers including “Yes, I know” and “No, I don’t know” were applied, with “Yes, I know” scoring 3 points and “No, I don’t know” scoring 0 points. The answer to each item of the “Attitude” and “Unhealthy behavior” dimensions was set to “Yes” and “No”, with 3 points for “Yes” and 0 points for “No”. The total score was the sum of the scores of 9 items. A higher total score stood for better effectiveness. Awareness rate = the number of people who were aware/total number of people surveyed ×100%. The questionnaire was reviewed and evaluated by one rehabilitation expert, one orthopedics, and four nursing experts. The self-made questionnaire was piloted before its use, which showed that the questionnaire had a Cronbach’s alpha coefficient of 0.90 and a content validity index of 0.85. Before the questionnaire-based survey, uniform training was arranged for participating nurses, and an investigator’s manual was developed. Before the health education, the participating nurses explained the purpose and significance of the survey to the two groups of patients and then distributed the questionnaire forms. For patients who had a high educational background and could answer questions on-site, the questionnaire forms were filled out by these patients directly; for the elderly patients or those who were difficult to understand the questions, a face-to-face interview was applied instead. Three months after the health education, patients were asked to visit the outpatient orthopedic department by telephone appointment and received a second survey by using the same questionnaire form. For patients who were not able to visit the orthopedic department within the specified period, the second survey was completed via telephone after having obtained consent from these patients. The survey typically lasted about 15 minutes.

The statistical analysis was performed using SPSS 21.0 software. The measurement data are presented as mean ± standard deviations () and compared using the independent samples t-test. Numeration data were compared using the Chi-square test. A P value of <0.05 was considered statistically significant. 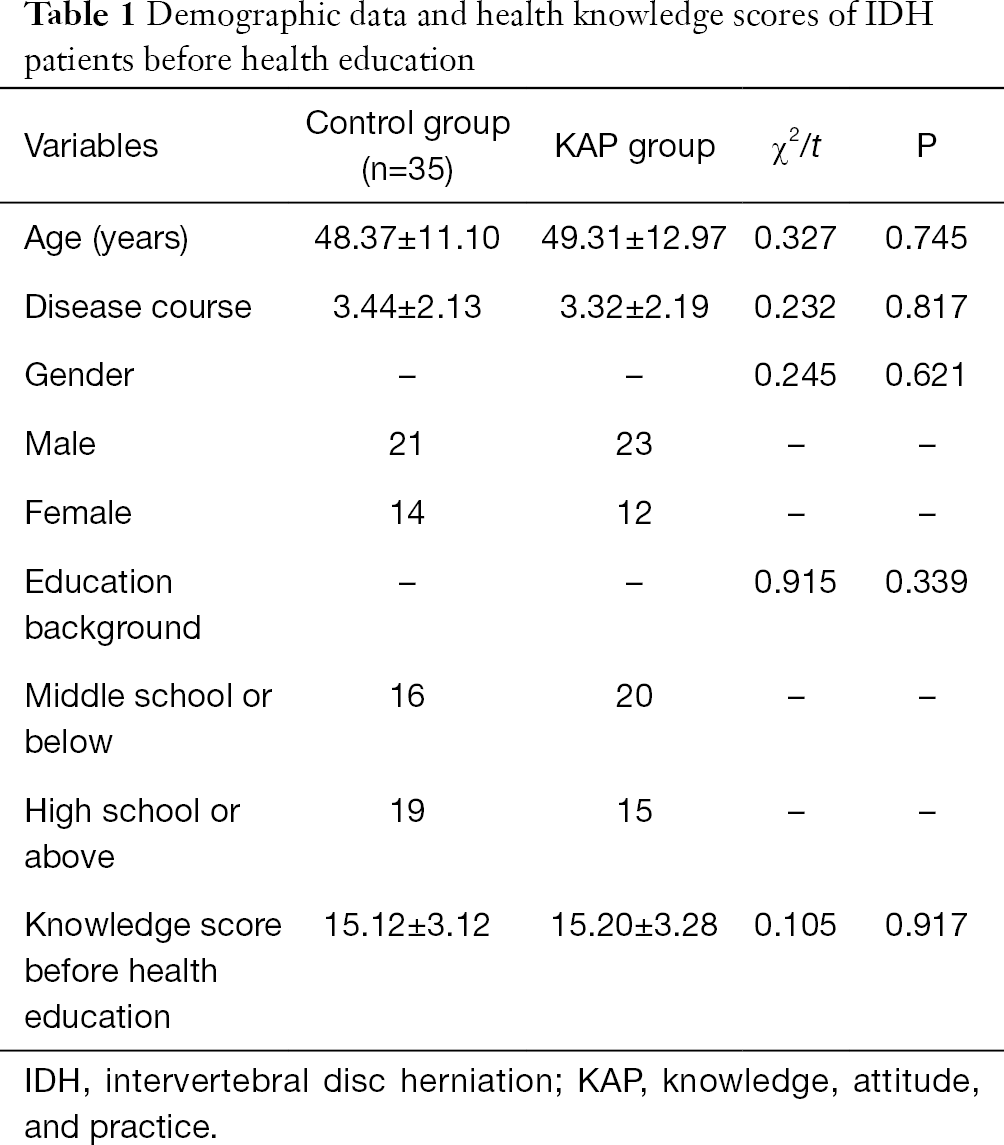 After the health education, the KAP group had the highest awareness rate (96.97%) of avoiding bending-forward. The awareness rates of disease, attitude, and behavior were significantly higher in the KAP group than in the control group (all P<0.05) (Table 2).

The KAP theory divides the process of human behavior change into three steps: acquiring knowledge, generating attitudes/beliefs, and forming practice/behaviors, during which human health behaviors can also be effectively changed (11). The KAP model empowers the patients to participate in the care and maintenance of their health actively and thus plays a remarkable role in disease prevention, control, and rehabilitation. It has been used in the management of diabetes, gout, and hyperuricemia, and in oral care. IDH is a highly prevalent disease requiring long-term rehabilitation, and therefore the KAP-based rehabilitation education is particularly important.

He et al. (12) found that the prevalence of IDH was up to 22.4% in young and middle-aged people, and the proportions of intermediate and poor levels of awareness about IDH were 52.1% and 21.4%, respectively. In our current study, the knowledge scores of the control group and the KAP group were (15.12±3.12) points, and (15.20±3.28) points (out of 27 points) before the health education, both of which were at the lower middle level and consistent with the findings of He’s study. The knowledge scores of these two groups significantly increased to (20.31±3.43) points and (25.42±3.16) points, respectively, after health education. Further comparison of the awareness rate of IDH showed that the KAP group had the highest awareness rate (93.94%) of the etiology and contributing factors of IDH. The inter-group comparison revealed that the scores of all disease knowledge-related items were higher in the KAP group than in the control group, suggesting the KAP-based rehabilitation education had effectively facilitated the systematic evaluation and personalized health education of patients and achieved the goals of increasing cognitive level and changing behaviors.

Also in our study, the proportion of patients with positive attitude towards rehabilitation exercise reached 93.94% in the KAP group, and the proportions of positive response for each item in the “Attitude” dimension were all higher in KAP group than in the control group, indicating the KAP-based rehabilitation education can effectively improve the patients’ attitudes. Further analysis of behavior showed that the behavioral scores of the KAP group were (7.85±0.68) points three months after the health education, and the overall score of the “Behavior” dimension and the awareness rate of the relevant items were higher than those in the control group. In-hospital KAP-based rehabilitation education increased patients’ awareness of the disease itself and the rehabilitation methods, helping them to learn exercise skills and build self-confidence. Thanks to the encouragement and instructions of the medical staff, the knowledge and belief were translated into healthy behaviors to the maximal extent. During the follow-up after discharge, in addition to the conventional telephone method, the medical staff also utilized WeChat, QQ, and other network platforms to regularly deliver health knowledge to the patients and timely answered their questions, thus continuously increasing patients’ knowledge of IDH and urging them to maintain healthy life behaviors/habits. For instance, the patients were instructed to train their waist correctly and adhere to functional exercise to promote the continuous delivery of healthy behaviors. Chen et al. (13) concluded that, compared with the conventional health education model, the KAP model could effectively help the patients to master the knowledge about IDH and adopt healthy behaviors, thus reducing postoperative recurrence. Wang et al. (14) performed a study in 60 IDH patients and concluded that the compliance rate was higher in the KAP group than in the control group, and the disease recurrence rate was 6.7% in KAP group, which was far lower than that (26.7%) in the control group; it was suggested that the KAP model made patients pay full attention to the values of rehabilitation training, medications, and self-care, which improved their long-term outcomes.