Perioperative dexmedetomidine and postoperative delirium in non-cardiac surgery: a meta-analysis

Delirium is a common central nervous system disorder characterized by acute attentional deficits. It often occurs during the initial days after surgery. Many risk factors contribute to postoperative delirium. Up to this date, the pathogenesis of postoperative delirium is still unclear. One hypotheses, cholinergic theory, states that stress response theory, and inflammatory response remain to be further studied. Delirium rates among elderly surgical patients is approximately 11% to 51%, and the prevalence increases with age (1). Although the symptoms of delirium are usually transient, it negatively affects the patients’ long-term outcomes and it is associated with an increased mortality rate, cognitive dysfunction, a prolonged hospital stay, and a decrease in quality of life (1,2). As the population ages and the number of elderly patients undergoing surgery increases, preventing postoperative delirium is of utmost importance. Various pharmacologic agents (e.g., antipsychotics, acetylcholinesterase inhibitors, sleep-wake cycle regulators) have been assessed for the use in preventing postoperative delirium (3,4). However, the results from these studies are inconsistent. To date, there are no convincing pieces of evidence to support pharmacologic prevention or treatment (1).

We identified potential articles by searching the following databases up to March 20, 2019, with no language restrictions: MEDLINE, Cochrane Central Register of Controlled Trials, Embase, and PubMed. The search terms used in Embase were as follows: (“dexmedetomidine” OR “mpv1440” OR “precede” OR “dexmedetomidine hydrochloride”) AND (“delirium” OR “subacute delirium” OR “mixed origin delirium”). We also checked the references of interest and searched for trial registrations or registration agency websites to identify any other trials.

Randomized controlled trials were included if they separately assessed the effects of assigning adult patients (18 years or older) who did not undergo heart surgery, assessed postoperative delirium outcomes, compared postoperative complications of dexmedetomidine with placebo or other sedation, or followed up at least 90% of randomized patients for vital status. Trials were excluded if patients have preoperative delirium or them randomized patients to multifactorial interventions (except where factorial randomization allowed separate assessment of the effects of dexmedetomidine).

After removing duplicates, titles, and abstracts, the items were screened and sequentially excluded, based on the previously defined eligibility criteria. Whenever uncertainty remained after screening the title and abstract, full-text articles were scrutinized independently by two investigators, and discrepancies were resolved by consensus after discussion. Supplied data were centrally checked for completeness, plausibility, and integrity before combining them into a single database. Two independent investigators assessed the risk of bias in the included trials according to the Cochrane Collaboration’s tool for assessing the risk of bias, using primarily original trial reports. Discrepancies were resolved by consensus after discussion. Principal investigators were contacted in case of missing information.

The primary outcome was postoperative delirium. To investigate the effect of different types of sedation on delirium, we divided the control into two subgroups based on dexmedetomidine doses: patients administered a dose higher than 0.2 µg/kg/h and patients administered a dose lower than 0.2 µg/kg/h. Delirium was assessed the Confusion Assessment Method for the ICU. We used frequencies and percentages to summarize categorical variables, if relative risk is the most useful indicator of the strength of the association between exposure (intervention) and events. Therefore, we used relative risk with 95% confidence intervals (CIs) for treatment effects. All trials were analyzed separately, and respective principal investigators confirmed the results. Discrepancies were resolved by discussion.

All analyses were pre-specified unless otherwise stated. The heterogeneity of treatment effects across trials was estimated for the outcome using the Cochran’s Q test and I2 index. If heterogeneity was absent (P>0.1 and I2<50%), the fixed-effect model was used to calculate pooled effects. Otherwise, a random-effect model was used. Statistical analyses were conducted using Review Manager 5.3 (Cochran Collaboration) and Stata (Stata Corporation, College Station, TX, USA) version 12. We used Egger’s test to assess publication bias in the 10 articles included in this meta-analysis. All P values were two-sided and considered significant if less than 0.05.

Our search retrieved 1,426 items, of which 175 were duplicates. After screening titles and abstracts, 25 reports of randomized controlled trials of interest remained and were evaluated in detail. Of these, we excluded 9 trials because they included medical or surgical ICU patients other than noncardiac surgery (8-16), three trials because other sedation was used with dexmedetomidine (17-19), one trial because patients were randomized by blocking circadian rhythms (20), one trial because patients had chronic obstructive pulmonary disorder and did not undergo surgery (21), and one trial because the control was unclear (22). As shown in Figure 1, our meta-analysis thus comprised 10 trials and 2,286 patients (23-32). 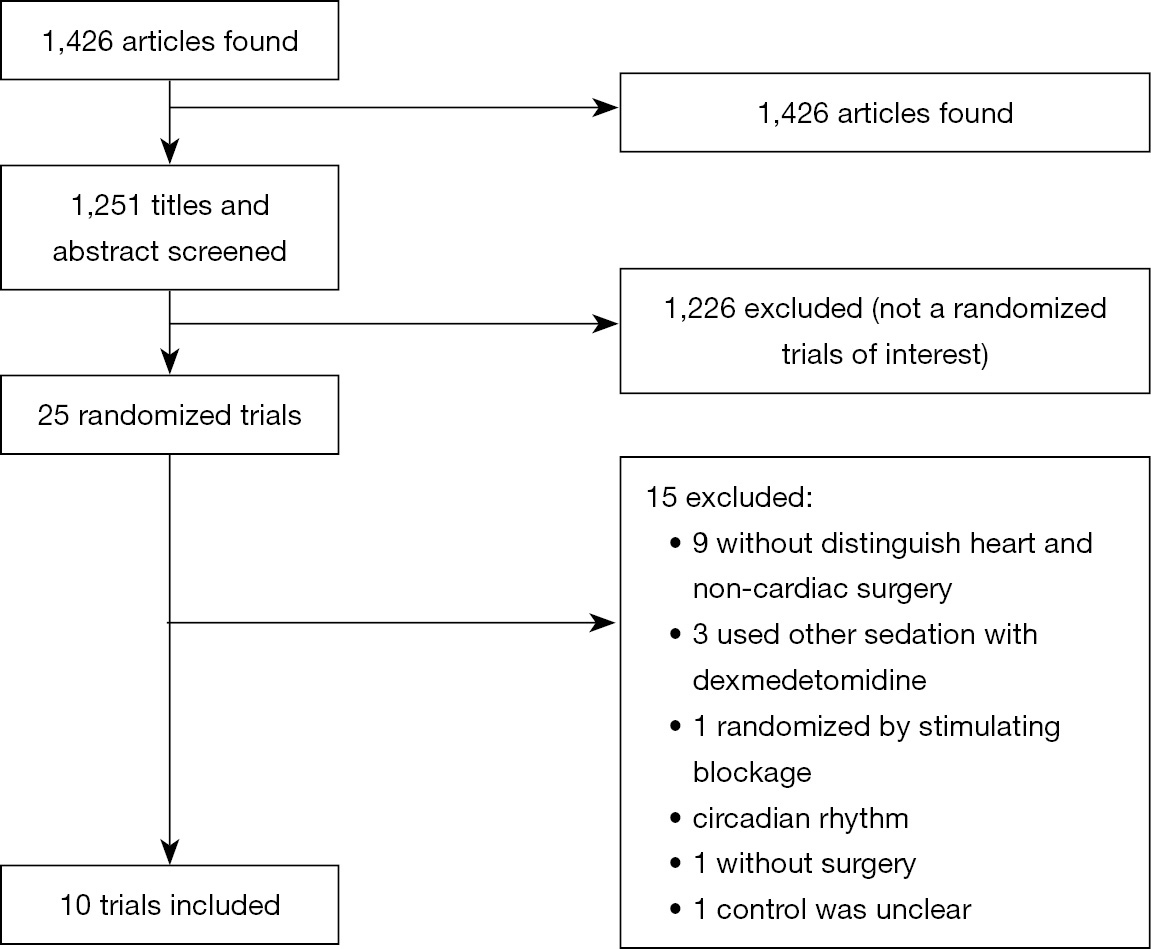 Altogether, we assigned the 2,286 patients with non-cardiac surgery to either the dexmedetomidine administration group or the control (e.g., saline placebo, other sedation) administration group. Seven studies compared dexmedetomidine with saline alone, two with propofol alone, and one with midazolam alone. Seven studies evaluated patients older than 65 years, and the other three evaluated patients older than 18 years old. Dexmedetomidine infusion rates ranged from 0.1 to 1.0 µg/kg/h. Characteristics of the various included studies are shown in Table 1. Methodological quality assessment was conducted, and the results were shown in Figure 2. 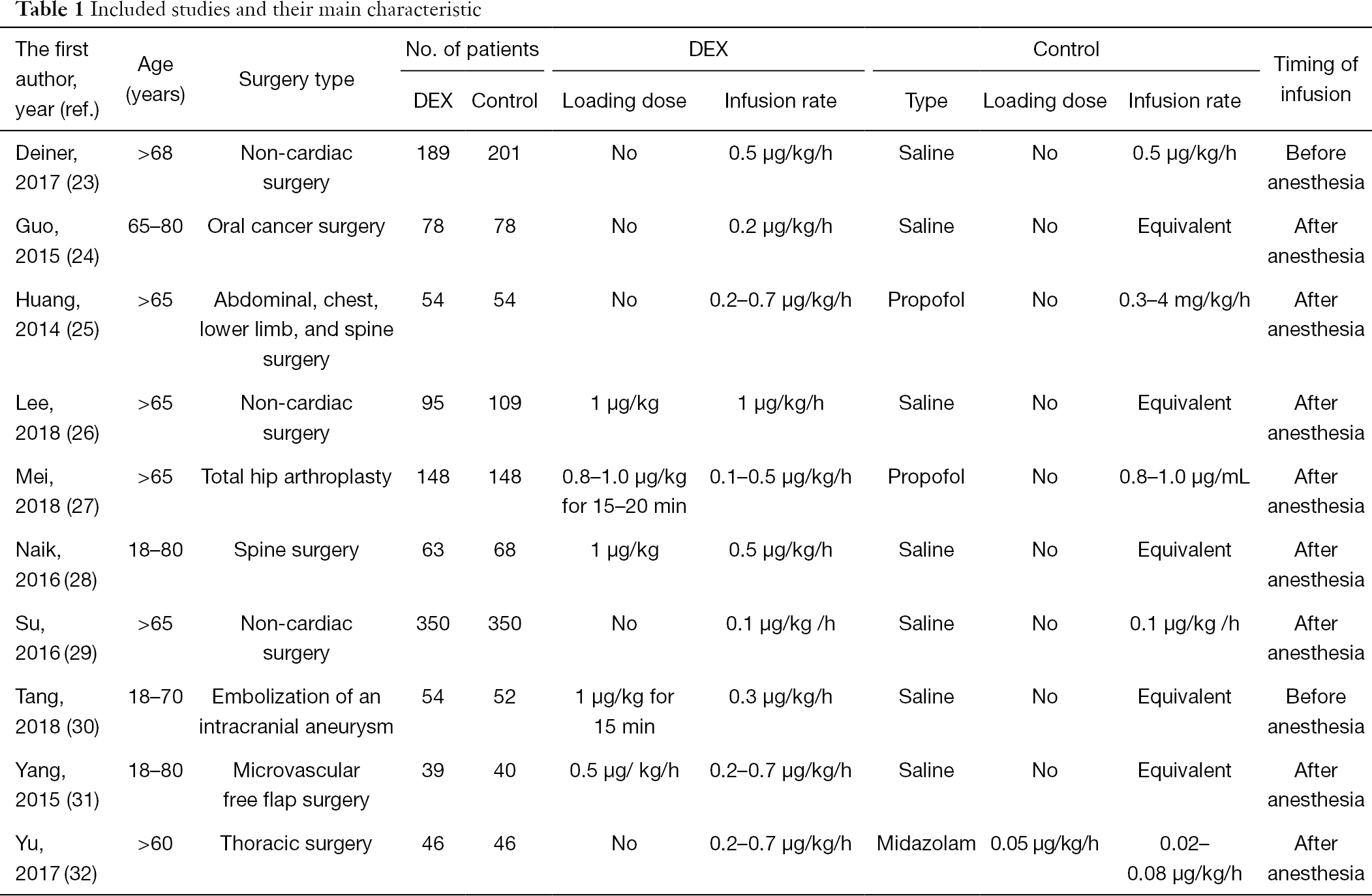 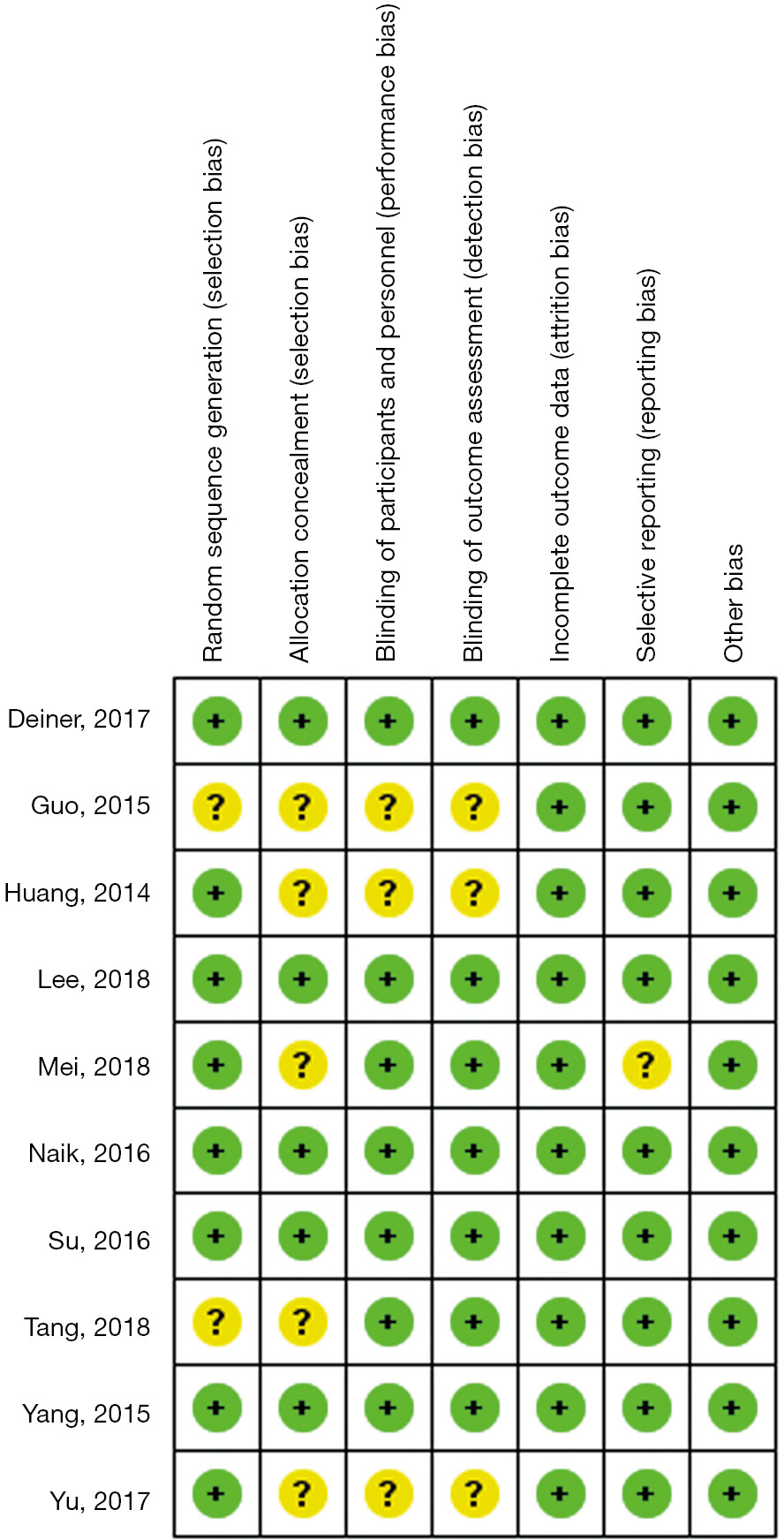 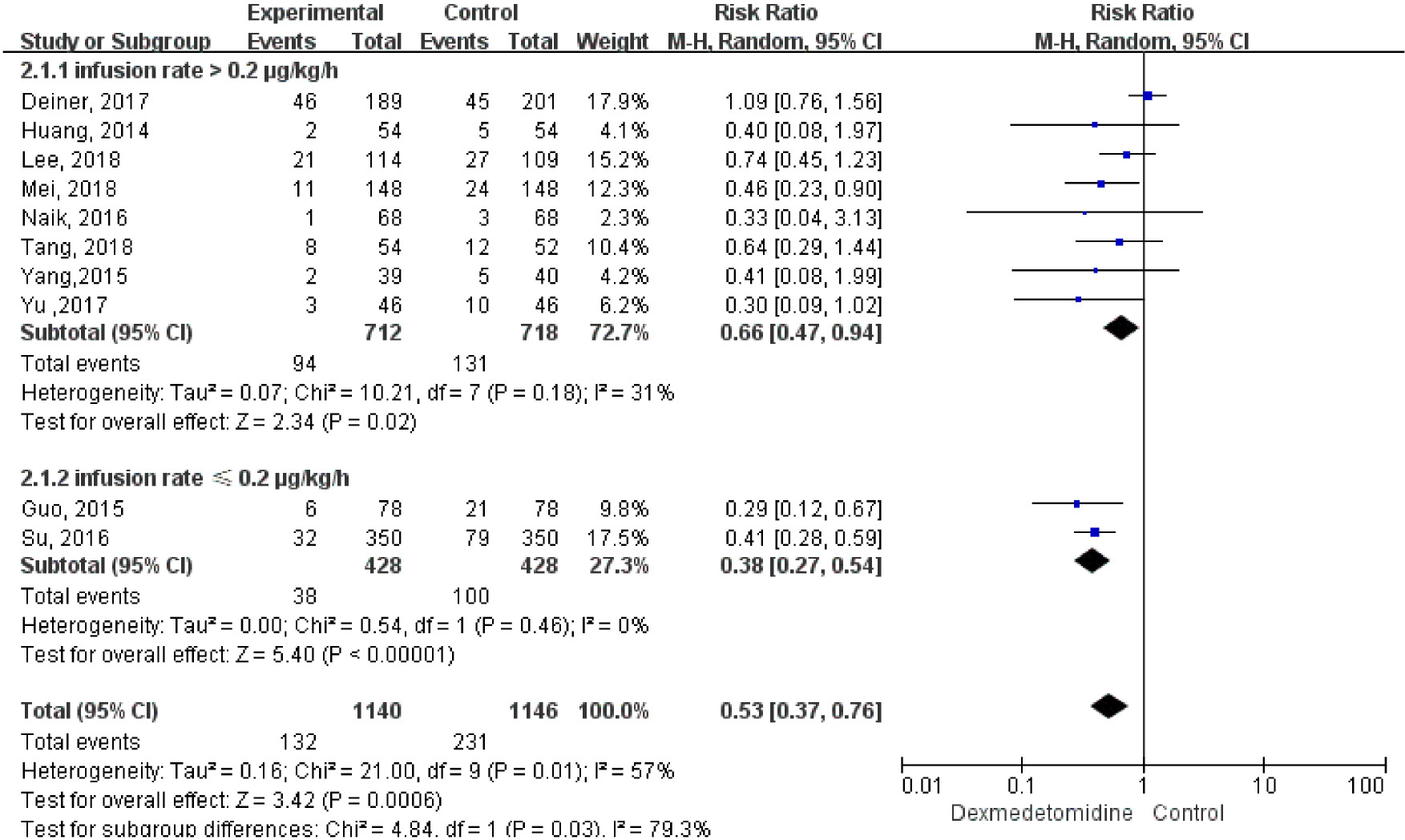 Figure 3 The outcome of postoperative delirium after dexmedetomidine sedation versus placebo (or other sedation) sedation.

The potential publication bias was surveyed from the Egger’s plot (Figure 4) using the postoperative delirium as an endpoint. The results showed that P=0.189 without publication bias. The sensitivity analysis also showed that outcomes remained similar, regardless of which effect model was applied. 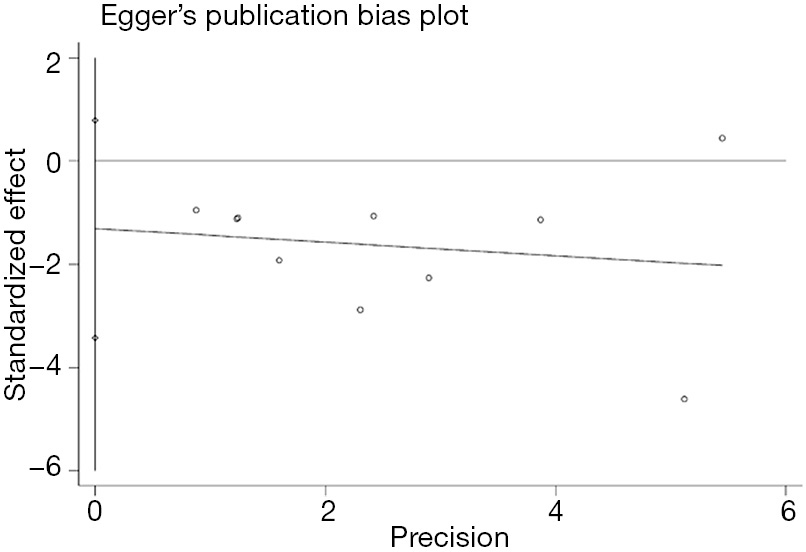 This meta-analysis compared dexmedetomidine with a placebo control to identify the postoperative development rate of delirium in patients who underwent non-cardiac surgery. Dexmedetomidine administration was shown to have a statistically significant 47% rate of relative risk reduction of postoperative delirium.

Improvements in surgical management over the past two decades have reduced patient mortality. However, no convincing evidence yet supports pharmacologic prevention or treatment choices for postoperative delirium, which will see an increase as the elderly population increases. Dexmedetomidine is increasingly used for sedation in patients in the ICU (33). In this study, we demonstrated that dexmedetomidine sedation results in a statistically significant rate of 47% on the relative risk reduction of postoperative delirium, which is consistent with a previous study showed that compared to other sedatives, dexmedetomidine is associated with a decreased prevalence of delirium (8,34). The reason for this effect may be as follows: first of all, inflammatory response and cholinergic theory are two of the potential pathogenesis of postoperative delirium, while dexmedetomidine attenuates the inflammatory response and is lacking anticholinergic activity (35). Secondly, it is reported that compared with ICU patients without endotracheal intubation, those with endotracheal intubation have higher postoperative delirium prevalence (36). Consistently, unlike other sedations (such as propofol), dexmedetomidine could shorten extubation times (37).

Dexmedetomidine has been used by intensivists in the general practice for sedation in mechanically ventilated ICU patients at an infusion rate of between 0.2 and 1.7 µg/kg/h, with or without a loading dose (8,10,34). However, The sedative dose of dexmedetomidine used in the earlier studies (10) was associated with an increase in hypotension or bradycardia, which limits its availability in wider clinical applications (33). Previous studies demonstrated that dexmedetomidine induces dose-dependent hemodynamic changes (38). Lower doses of dexmedetomidine decreases stress response when compared to a higher dose (39). In our study, a high heterogeneity among postoperative delirium outcomes across the trials was evident. However, in a subgroup analysis of different doses of dexmedetomidine, no heterogeneity was found, which is under the total outcomes. Therefore, the potential benefits of delirium reduction need to be balanced against the increased risk of hypotension and bradycardia, particularly in patients who are at increased risk, such as those with advanced age and comorbidities. What is more, as the occurrence of postoperative delirium is at its highest during the early postoperative hours, early prophylactic pharmacological intervention is warranted (40). Deiner et al. (23) demonstrated that intraoperative dexmedetomidine does not prevent postoperative delirium, which underscores the importance of timing when administering the drug to prevent delirium. Therefore, further analysis of the timing of dexmedetomidine administration is needed.

This meta-analysis directly compares prespecified risk exposures and major outcomes, using the same definitions. However there are some limitations to our study, including the small number of trials and the limited ability to perform a meta-regression to understand the effects in different patient subgroups. Besides, we focused on postoperative delirium only and no other outcomes.