Sepsis is a systemic inflammatory response syndrome caused by infection. Septic shock and multiple organ dysfunction syndrome (MODS) often occur in patients with sepsis. Although supportive cadre technique is developed, the mortality of patients with septic shock remains high and it is one of the major reasons for death of patients in ICU. Among various complications of sepsis, acute kidney injury (AKI) is a well-recognized complication of sepsis associated with high mortality and high cost of therapy, especially for patients with septic sepsis (1,2). The pathogenesis of sepsis induced AKI is multifactorial including aberrant hemodynamics, release of inflammatory cytokines or endotoxin, and clotting disorder (3,4). The mortality of septic patients with AKI could be up to 64.6% (5,6). Therefore, interventions that could prevent AKI and maintain renal function are desirable.

Sedation is an important and necessary part of management of critically ill patients in ICU including septic patients. As a selective alpha2-adrenoceptor agonist, dexmedetomidine provides anxiolysis, analgesia and maintain hemodynamic stability without respiratory depression (7). It decreases the stress response of critically ill patients, especially for patients undergoing mechanic ventilation in ICU (8). More and more studies reveal that dexmedetomidine exerts protective effects on organ function, and perioperative use of dexmedetomidine could improve the outcome of surgery (9). Dexmedetomidine produce potentially protective effect on renal function including inhibition of renin release, increased glomerular filtration and increased secretion of sodium and water. However, whether dexmedetomidine application could prevent AKI of patients with septic shock and improve their outcome still need to be confirmed. In the present study, we detected the changes of inflammatory cytokines and cellular immune function in septic shock patients who received dexmedetomidine infusion, and the protective effect of dexmedetomidine on renal function and outcome of patients were analyzed.

Patients with septic shock undergoing mechanical ventilation in ICU of Zhejiang Provincial People’s Hospital from Jan 2014 to Mar 2016 were included as the research subjects. The diagnostic criteria for septic shock were in accordance with the definitions provided in American College of Chest Physicians and the Society of Critical Care Medicine (ACCP/SCCM). In brief, Septic shock was defined as sepsis with hypotension unresponsive to fluid resuscitation and further requiring vasopressors to maintain blood pressure on admission day. Exclusive criteria were: age <18 years; history of nephropathy such as chronic glomerulonephritis, pyelonephritis and diabetic nephropathy; severe valvular heart diseases; brady arrhythmia; severe pulmonary diseases; malignant tumors; pregnancy; immunodeficiency.

Disease severity was assessed by the Acute Physiology and Chronic Health Evaluation (APACHE) II score using data within 24 h of admission. Sepsis-related organ failure assessment (SOFA) score was calculated. Immediately after arrival in ICU, all patients received routine therapy according to the international guidelines for management of severe sepsis and septic shock (2012). Then patients were randomized into two groups including propofol group (n=100) and dexmedetomidine group (n=100). The patients in propofol group received a loading dose of 1 mg/kg propofol for 10 min followed by a continuous IV infusion at 1–3 mg·kg−1·h−1 for 5 d. The patients in dexmedetomidine group received a loading dose of 1 µg/kg dexmedetomidine for 10 minutes followed by a continuous IV infusion at 0.2–0.3 µg·kg−1·h−1 for 5 d. The aim of sedation was to establish a sore from −2 to 0 on the Richmond Agitation sedation scale (RASS). Informed consents were obtained from all patients and the study was approved by the Ethics Committee of Zhejiang Provincial People’s Hospital.

Plasma samples were obtained from veins at 0, 12, 24, 72 and 120 h after receiving mechanical ventilation in ICU. All plasma samples were stored at −80 °C until centrifugation within 2 h. Urine samples were collected at the same time point mentioned above and were analyzed as soon as possible.

After admission in ICU, the age, gender, and other clinical information were recorded, and routine monitoring of vital signs, testing of breathing and blood gas parameters and bacterial culture were performed.

AKI was defined using SCr and urine output criteria according to the Clinical Practice Guideline for Acute Kidney Injury [2012]. The AKI incidence rate among patients was calculated. The outcome of patients in two groups was analyzed through the data of duration of mechanical ventilation, ICU stay, MODS incidence and 28-d survival.

Data analysis was performed using SPSS17.0 software (SPSS Inc., Chicago, IL, USA). The non-normal distribution data were expressed as median and normal distribution data were expressed as mean ± SD. For the non-normal data, Mann-Whitney test was performed for comparison between two groups. For normal data, one way-ANOVA was performed for comparison between multiple groups followed with LSD test. The difference in frequency distribution between groups was determined by Chi-square test. Spearman correlation analysis was performed. The 28 d survival was calculated by Kaplan-Meier curves with log-rank test. The criterion for significance was P<0.05.

The general clinical information of 200 patients are shown in Table 1. There was no statistical difference in the demographic data such as age, sex, APACHE II score, SOFA score, etc. (P>0.05). 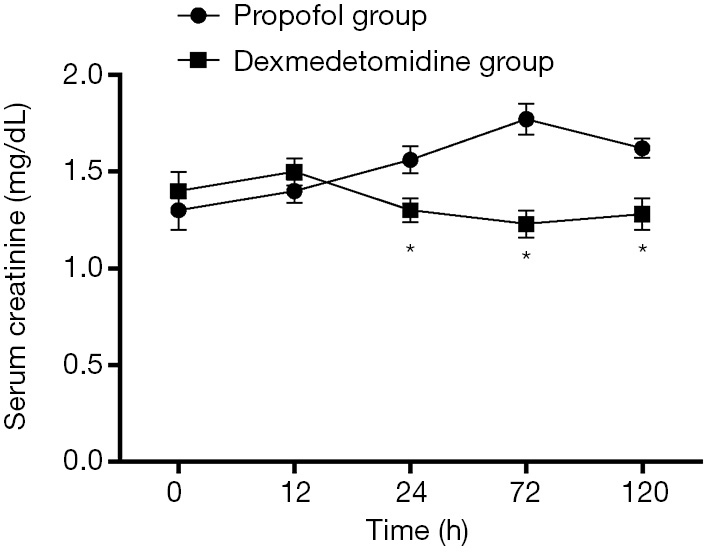 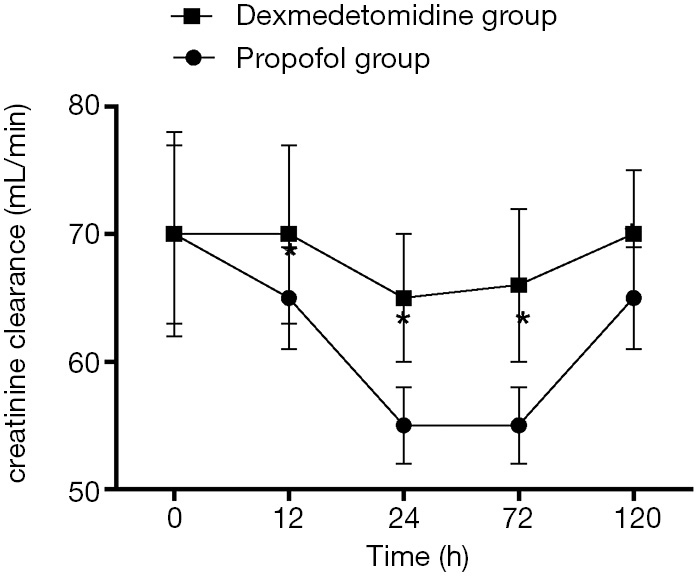 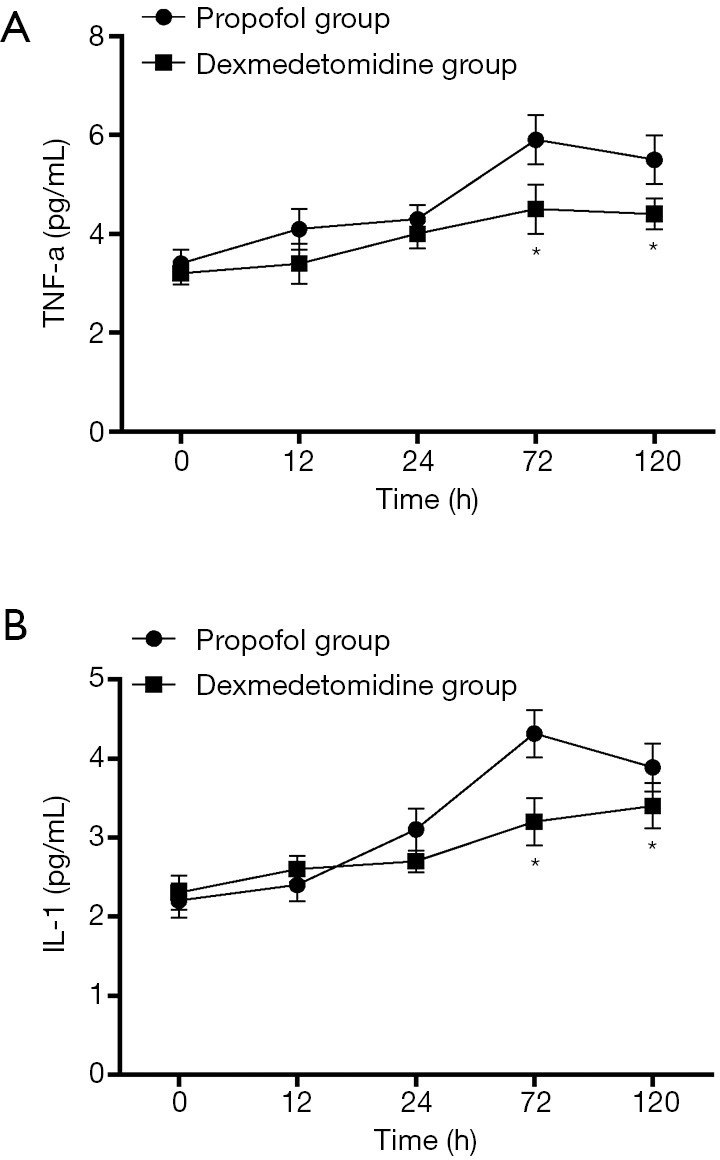 Patients with sepsis undergoing AKI is extremely common in clinical practice, particularly in ICU, which influences patient survival and increases cost (1,6). Approximately 50% of patients suffer from AKI caused by sepsis (2,4). Notably, mortality of these patients is as high as 70%. However, the mechanisms of sepsis−induced AKI remain unclear and effective therapy strategies are also lacking (10). In brief, numerous different types of mechanisms are associated with this complication. Renal ischemia−reperfusion injury, inflammatory reaction, oxidative stress injury, nitric oxide release, cell apoptosis, endothelial dysfunction and the direct injury of endotoxin all participate in this process (11). Although there is a great interest in therapeutic modalities to prevent and treat AKI within this population, no strategies have been validated. Therefore, to develop new therapeutic strategies is urgent so far. In the present study, we found that cohorts with septic shock after mechanical ventilation in ICU had similar baseline and demographic characteristics, but patients receiving dexmedetomidine were less likely to develop AKI. Lower levels of renal injury markers were detected, including NGAL in blood samples, Cys-c and kidney injury molecule-1 in urine in the dexmedetomidine group, compared with the propofol group. Moreover, dexmedetomidine infusion reduced the use of continuous renal replacement therapy and ICU stay. However, dexmedetomidine had no influence on mechanical ventilation duration and also had no effect on 28 d survival of patients. To reveal the mechanism of protective effect of dexmedetomidine, we also detected and compared the variables of immunity and cytokines. Results showed that dexmedetomidine infusion could reduce the TNF-α, IL-1 level in blood samples and maintain the balance of proportion of CD4+ and CD8+ T-lymphocytes. It is indicated that dexmedetomidine may play a protective effect through a combination of anti-inflammatory reaction and immunoregulation.

This study was supported by existing literature, demonstrating the renoprotective properties of dexmedetomidine, however most of these studies focused on patients after heart surgery. A large retrospective study found that adults with the use of perioperative dexmedetomidine after coronary artery bypass grafting were less likely to develop AKI, especially among patients with baseline normal or near-normal kidney function (9). Another single center retrospective matched cohort study also showed that use of dexmedetomidine infusion in pediatric patients after congenital heart surgery was associated with a decreased incidence of AKI (8); as similar as our study, there was also no any association with changes in clinical outcomes. A randomized, placebo-controlled, double-blind clinical trial suggested that dexmedetomidine infusion administered as a supplement to epidural analgesia induced diuresis in post thoracotomy patients with normal preoperative renal function and undergoing fluid restriction that indicated a beneficial effect on glomerular filtration compared with controls (12). Another randomized study among patients undergoing coronary artery bypass grafting surgery found that the addition of dexmedetomidine was associated with an increased urine output during the first POD and a trend toward increased Ccr. It was also noted that the dose-dependent use of dexmedetomidine caused a decrease in NGAL, a sensitive and pacific biomarker for kidney injury (13). Dexmedetomidine has been demonstrated within pediatrics to decrease the incidence and severity of contrast-induced nephropathy when used during cardiac angiography although the mechanism of injury is different from CPB-induced AKI (14). Organ protective effect in patients with sepsis was also reported, for instance, Pandharipande et al. found septic patients receiving dexmedetomidine had more days free of brain dysfunction and mechanical ventilation and were less likely to die than those that received a lorazepam-based sedation regimen (15). However, to our best knowledge, this is the first study to demonstrate the renoprotective effect of dexmedetomidine in ICU patients with septic shock.

The exact mechanism by which dexmedetomidine may be renoprotective is not completely understood but is likely a combination of anti-inflammatory, cytoprotective, and sympatholytic effects. In a study on the ability of dexmedetomidine to prevent AKI in a sepsis model, rats treated with dexmedetomidine had a lower AKI incidence, a lower mortality rate, decreased levels of tumor necrosis factor-α and an increased expression of the anti-inflammatory protein bone morphogenetic protein-7. Tan et al. found that in a LPS induced sepsis rat model, dexmedetomidine protected against sepsis−induced AKI through depressing the inflammatory reaction, the mechanisms of which may be associated with α−2 receptors inhibition (16,17). An ischemia-reperfusion mouse model showed that dexmedetomidine might have additional cytoprotective effects through the α2-adrenoceptor activation of cell survival signal pAKT (18). Furthermore, it has been demonstrated that reduced sympathetic drive induced by dexmedetomidine may modulate vasoreactivity and improve renal blood flow potentially through down-regulation of the vasoconstrictor endothelin-1 (19) .

In conclusion, the use of a dexmedetomidine infusion in ICU patients was associated with a decreased incidence of AKI and reduced ICU stay and CRRT performance, however, it was not associated with changes in 28 d survival. The mechanism may be related to anti-inflammatory reaction and immunoregulation.

We thank all of the patients and the healthy control subjects for their participation in this study.

Ethical Statement: The authors are accountable for all aspects of the work in ensuring that questions related to the accuracy or integrity of any part of the work are appropriately investigated and resolved. This study was approved by Ethics Committee of Zhejiang Provincial People’s Hospital (No. 2016KY131). Informed consents were obtained from all patients.