Prevalence and contributing factors of osteoporosis in the elderly over 70 years old: an epidemiological study of several community health centers in Shanghai

Osteoporosis (OP) is characterized by the decreased bone mass and destruction of the bone microstructure, which may increase the bone fragility and cause the susceptibility to fracture (1). The senile OP generally refers to the primary OP that occurs after the age of 70. The typical clinical manifestations of senile OP are the pain, shortened height, kyphosis, bone fracture and respiratory disorder. Senile OP is the main cause of bone fracture in the elderly. It seriously affects the health status and quality of life of the elderly, even endangers life, and increases the medical burden to society and families.

With the increasing emphasis on the OP in the communities in recent years, most of the elderly in Shanghai have adopted some measures to prevent OP. In the past 10 years, the life expectancy of the elderly in Shanghai increases over year. In the present study, the epidemiological characteristics of OP were investigated in the old people of community health service centers in Shanghai, aiming to understand the current knowledge, prevalence and treatment of OP in Shanghai.

A total of 565 subjects no younger than 70 years were randomly recruited from four Community Health Centers (Yuyuan Community Health Center in Huangpu District, Laoximen Community Health Center in Huangpu District, Wusong Community Health Center in Baoshan District and Youyi Community Health Center in Boashan District) between Jul 2017 and Dec 2018. The inclusion criteria were as follows: (I) permanent residents of the local community; (II) no younger than 70 years; (III) normal ideation; (IV) cooperation with this study. Exclusion criteria were as follows: (I) severe heart, liver or renal dysfunction; (II) diagnosed with OP secondary to other diseases such as diabetes and hyperparathyroidism; (III) senile dementia or severe mental and neurological disease; (IV) a history of violent or pathological fractures. The project was authorized by the ethical committees of the Chinese Clinical Trial Registry, the number of the approval: ChiECRCT20190088. Informed consent was obtained from all the subjects before taking part. The general characteristics, BMD, history of treatment for OP, awareness rate of OP, prevalence of OP and treatment rate of OP were recorded.

Assessment of activity of daily living

The mini nutritional assessment short-form (MNA-SF) (3) was used to assess the change in recent diet, the change in body weight within prior 3 months, physical performance, stress and acute disease, neuropsychiatric disease, body mass index (BMI) and calf circumference (CC), and the resultant scores were divided into favorable nutritional status (≥24) and malnutrition (<24).

Fasting blood was collected from these subjects into a tube without any anticoagulant. 30 min later, the blood was centrifuged at 3,500 rpm/min for 10 min, and the serum was harvested. The contents of P1NP, β-CTX, N-MID and 25OHD in the serum were detected with an automatic electrochemiluminescence immunoassay analyzer (E601; Roche) and corresponding reagents. 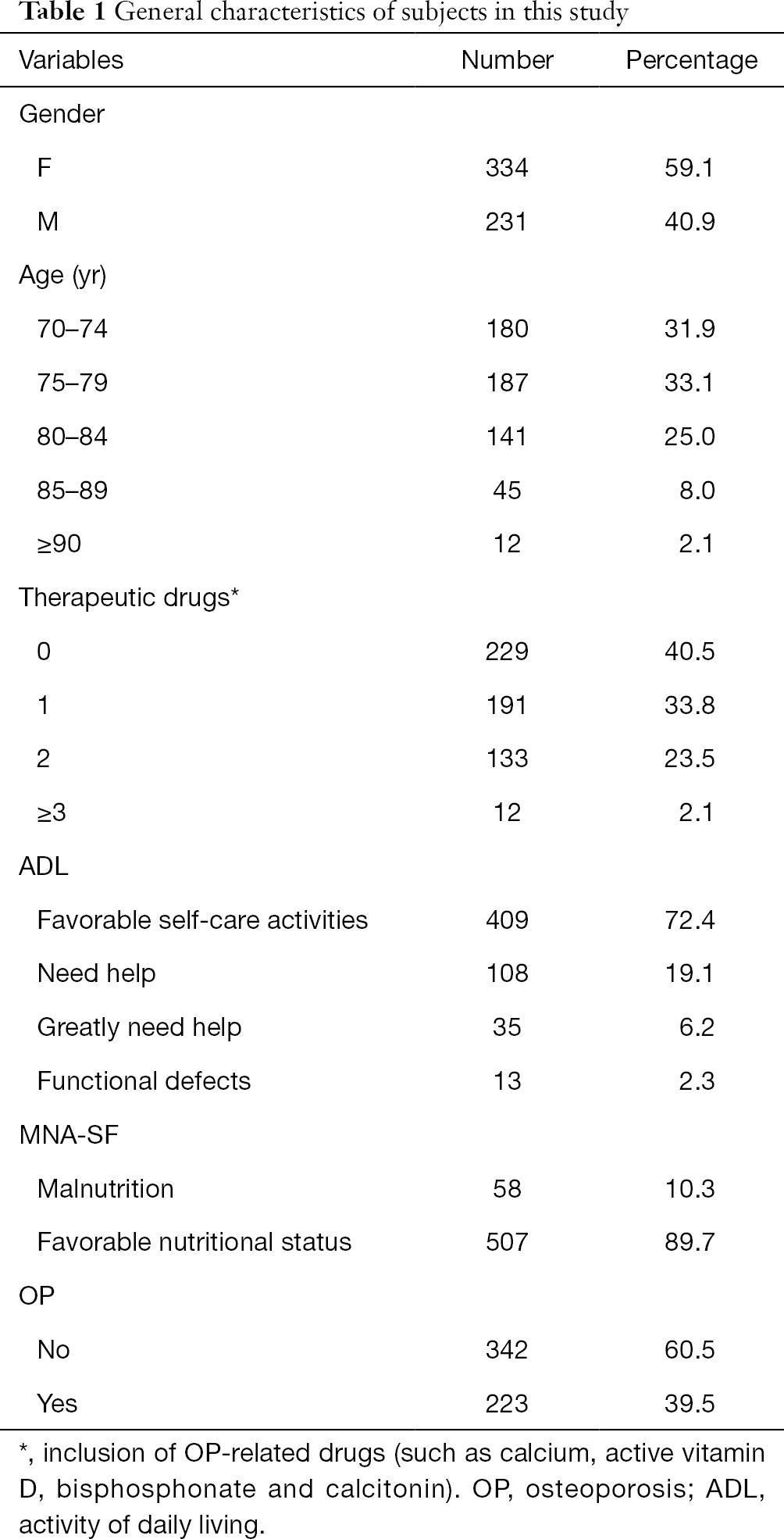 Table 1 General characteristics of subjects in this study
Full table

Correlation between ADL and OP

The prevalence of OP was significantly different among the elderly with different self-care activities (χ2=54.241, P=0.000) (Table 2). 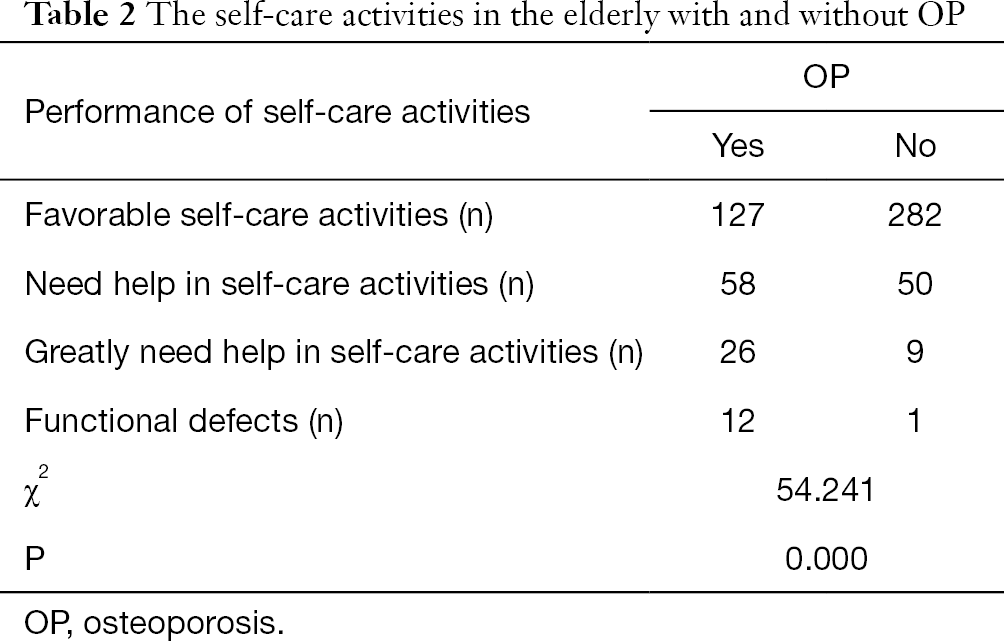 Correlation between MNA-SF and OP

The prevalence of OP was markedly different between the malnutrition people and the people with good nutritional status (Table 3). 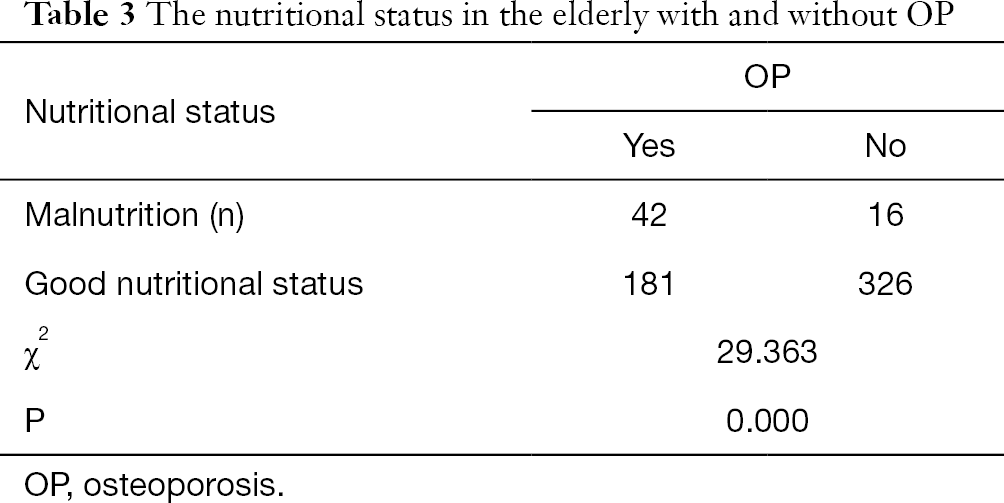 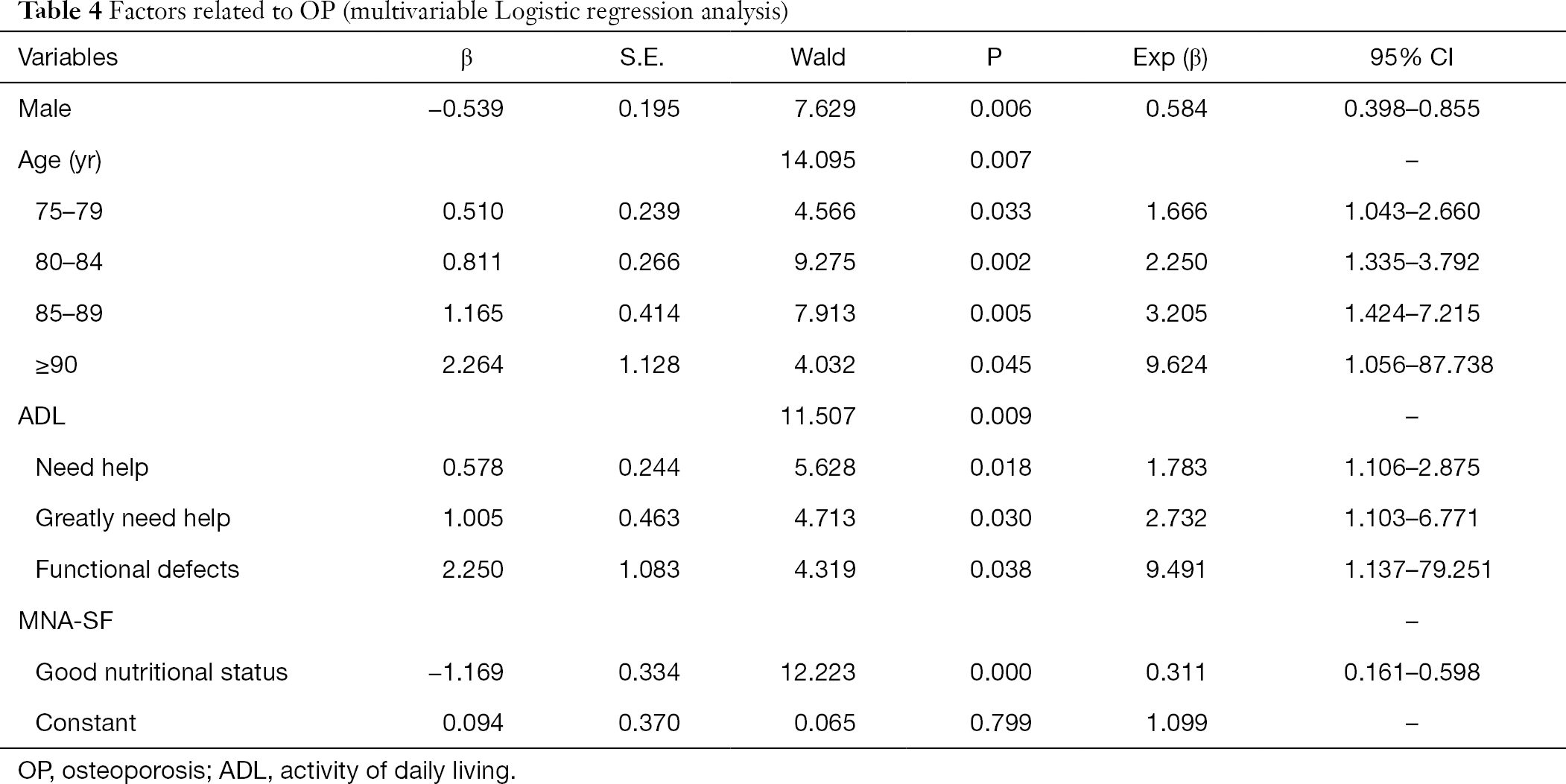 BTM in the elderly with and without OP

Correlation between BTM and BMD

Li et al. (6) found the prevalence of OP was comparable between males and females, but Zhang et al. (7) reported that the prevalence of OP in females was higher than in males of the same age group. It is indicated that the controversy about the influence of gender on prevalence of OP. In the present study, multivariate logistic regression analysis showed the prevalence of OP in females increased as compared to males (P=0.006, OR =0.584), suggesting that female gender is an independent risk factor of OP in the elderly. This may be related to the reduction of estrogen after menopause in females. In addition, the risk for OP in the elderly aged 75–79 years (P=0.033, OR =1.666), 80–84 years (P=0.002, OR =2.250), 85–89 years (P=0.005, OR =3.205) and ≥90 years (P=0.045, OR =9.624) increased as compared to the elderly aged 70–74 years, suggesting that the advancing age is also a risk factor of OP, which was consistent with the results of Mathieu et al. (8), who reported that the decreases in sex hormone and bone formation over age were associated with OP (9). At the same time, our study also showed the risk of OP in the elderly who need help, greatly need help or have functional defects, was 1.783, 2.732 and 9.491 times of that in the elderly with favorable self-care activities, which was consistent with the result reported by Chen et al. (10). Studies have shown that the time and intensity of exercise will decrease with the decline of ADL in the elderly, and the appropriate weight-bearing and resistance exercise is beneficial to promote bone formation, reduce bone loss and avoid fragility fractures, and exercise is positively related to BMD (11,12). The BMD reduces with the reductions in the time and intensity of exercise, resulting in OP. The reduction in the ADL may decline the time and intensity of exercise, and therefore reduces the BMD. The elderly with good nutritional status had lower risk of OP than those with malnutrition (P=0.000, OR =0.311), indicating that the better the nutritional status, the less likely the OP is, which is similar to the results reported by Heaney et al. (13). The prevalence of OP in the elderly increases with the decrease in the nutritional status, which may be ascribed to the decreased protein intake, vitamin D reduction and calcium deficiency (14). In the present study, participants were confined to the outpatients in the Community Health Service Centers, and thus there might be bias in the composition of subjects recruited; the intake of protein, vitamin D and calcium was not determined and thus we could not determine the relationship of them with the risk for OP. Further studies are needed to classify the role of different nutrients in the pathogenesis of OP.

The organic components of the bone are mainly composed of type I collagen (about 90%), bone binding protein (about 10%) and other trace proteins (15). After adulthood, the bone growth stops, but cellular activity (bone reconstruction) continues; there are still bone formation and resorption, which remains at a dynamic equilibrium. However, menopause and certain pathological processes may increase the bone resorption, leading to OP. BTMs reflect the functions of osteoblasts and osteoclasts. It has been confirmed that the compromised bone formation is the main cause of OP in the elderly (16). The bone metabolism in the elderly shows low-turnover, the bone formation and resorption are low, and the bone formation is significantly lower than the bone resorption.

At present, the BMD measured by the dual-energy X-ray absorptiometry is recognized by the international academic community as the gold standard for diagnosis of OP (17). However, X-ray bone absorptiometry has some disadvantages, such as radioactivity; the BMD values detected are affected by the instruments used for the measurement; the cost is relatively high; change in BMD is relatively lagging, and increase of bone density will be observed at about 2 years after anti-OP treatment. Clinically, the increase in fracture risk is not always associated with the reduction in BMD, and BTMs have a good correlation with fracture risk (18), which can compensate for the disadvantages of BMD detection. The detection of BTMs has following advantages: the changes in BTMs after anti-absorption therapy can predict the risk for fracture (19); the changes in BTMs precede the change in BMD (20); BTMs can provide information about the therapeutic efficacy at about 3 months after anti-OP treatment (21); the detection is simple, easy, and acceptable.

In the organic components of bone matrix, type I collagen is synthesized by the osteoblasts. The N-terminal and C-terminal extensions of type I collagen are removed by special proteases, forming bone matrix. The N-terminal is P1NP. When the activity of osteoblasts is enhanced, the synthesis of procollagen increases, and the blood concentration of P1NP increases. The blood P1NP concentration may reflect the ability of osteoblasts to synthesize collagen, which is the basis for the assessment of osteoblast activity and bone formation (22,23). Our study showed that P1NP was significantly lower in the OP group than in the non-OP group, suggesting that elderly patients with OP had lower bone formation than the elderly without OP. In addition, BMD was positive related to P1NP, indicating that the reduction of BMD in the elderly is related to the reduction of bone formation.

Osteocalcin is a non-collagen bone matrix protein secreted by mature osteoblasts, and accounts for 25% of non-collagen components in the bone matrix and 2% of total bone protein. The serum osteocalcin is diverse in the form: about 1/3 is intact osteocalcin (i.e., full-length osteocalcin), 1/3 is N-terminal moderate molecular (N-MID) fragment of osteocalcin and 1/3 is short peptide. Due to the poor stability of the full-length osteocalcin, the temperature and time of storage will affect the experimental results. Therefore, serum N-MID is generally measured in clinical practice. Detection of N-MID is simple and rapid, and N-MID is also a specific biochemical indicator of bone formation. Our study showed N-MID level was significantly lower in the OP group than in the non-OP group, suggesting the elderly with OP have lower bone formation than the non-OP elderly. In addition, BMD is positively related to N-MID, indicating that the reduction of BMD in the elderly is related to the reduction of bone formation.

In patients with primary OP, there are dysfunction of vitamin D production and metabolism, resulting in a decrease in the active vitamin D. Although vitamin D does not directly reflect the activity of osteoblasts or osteoclasts, an in vitro study reported that vitamin D was able to promote the differentiation and maturation of precursor cells into osteoblast, induce the synthesis of osteocalcin in the osteoblasts, enhance alkaline phosphatase activity, and promote collagen production and insulin-like growth factors (25). In the present study, the blood 25OHD was significantly reduced in the OP group compared with the non-OP group, and the BMD was positively related to blood 25OHD, indicating that the decreased BMD in the elderly is associated with decreased bone formation.

In summary, female gender, advancing age, malnutrition, and poor self-care activities in daily living are independent risk factors of OP. To strengthen the community health education, increase nutrition intake and improve the self-care activities may be employed to prevent the occurrence of OP. In addition, P1NP, β-CTX, N-MID, 250HD and BMD are related to the BMD, and can reflect the balance between osteoblast function and osteoclast function. BMD together with BMD can be used to comprehensively assess the state of bone health, which is important for early identification of senile OP, guiding the clinical use of anti-OP treatment and monitoring of therapeutic efficacy.

Ethical Statement: The authors are accountable for all aspects of the work in ensuring that questions related to the accuracy or integrity of any part of the work are appropriately investigated and resolved. The project was authorized by the ethical committees of the Chinese Clinical Trial Registry, the number of the approval: ChiECRCT20190088. Informed consent was obtained from all the subjects before taking part.