Pulsed radiofrequency (PRF), a relatively recently introduced therapeutic procedure, is reported to safely and effectively control various types of chronic neuropathic pain (7-9). PRF uses radiofrequency currents to produce heat bursts, which are subsequently delivered to targeted nerves without causing significant damage to neural structures (10-12). In contrast, continuous radiofrequency (CRF) exposes target nerves to a continuous electrical stimulation, which subsequently increases the temperature around the radiofrequency needle tip and ablates the surrounding neural structures (13). PRF applies a brief electrical stimulation that is followed by a long resting phase. Therefore, during PRF stimulation, although heat is produced, the heat intensity is not sufficient enough to cause any significant structural damage (14). The proposed mechanism of PRF is that the electrical field produced by PRF hinders the transmission of noxious signals and alters pain perception (15-17). To date, several previous studies have reported that PRF stimulation of the dorsal root ganglion (DRG) can successfully control cervical radicular pain that results from spinal disease (18-24). However, in clinical practice, despite the beneficial effects of PRF, some patients’ radicular pain continues to be insufficiently managed. Conventionally, for controlling neuropathic pain, a single cannula (monopolar PRF) is used. However, to overcome the therapeutic limitations of the monopolar PRF, some previous studies applied two electrode tips (bipolar PRF) in refractory neuropathic pain conditions because bipolar PRF produces denser and larger electrical fields (9,18,25). However, to date, little is known about the effects of bipolar PRF treatment in cervical radicular pain.

From September 2017 to January 2019, a total of 60 patients with chronic cervical radicular pain received monopolar PRF stimulation of their cervical DRG, and we prospectively recruited patients who continued to present with persistent cervical radicular pain after a monopolar PRF procedure applied using C-arm fluoroscopy. Monopolar PRF was performed when the patient’s radicular pain was scored at least 4 (0 indicating no pain and 10 indicating the worst pain imaginable) on a Numeric Rating Scale (NRS), despite having been exposed to ≥1 cervical TFESI procedure. Twenty-four patients of 60 patients had persistent cervical radicular pain of at least NRS 4. Of these 24 patients, 20 patients (mean age: 60.8±7.9 years, range 44–72 years) were included in this study after applying inclusion and exclusion criteria and received bipolar PRF stimulation on their DRG (Table 1). Inclusion criteria were as follows: (I) presentation with ≥6-month history of segmental pain of cervical origin radiating from the neck to the arm or hand; (II) age 20–79 years; (III) ≥80% temporary pain relief following a diagnostic nerve block with 1 mL of 2% lidocaine; (IV) unsatisfactory response to monopolar PRF stimulation of the DRG (pain of ≥4 on NRS); (V) no interval change in the pain score on the NRS over the 4 weeks following monopolar PRF; (VI) imaging findings (magnetic resonance imaging and/or computed tomography) of HCD or cervical foraminal stenosis compatible with the patient’s pain symptoms. We excluded patients through following criteria: (I) previous history of cervical spinal surgery; (II) presence of peripheral neuropathy other than cervical radiculopathy, cervical myelopathy, or infection on the spine; (III) bilateral symptoms or involvement of >1 segment, and (IV) the presence of a coagulation disorder. The Institutional Review Board of our hospital approved the study, and all patients provided a signed informed consent form. 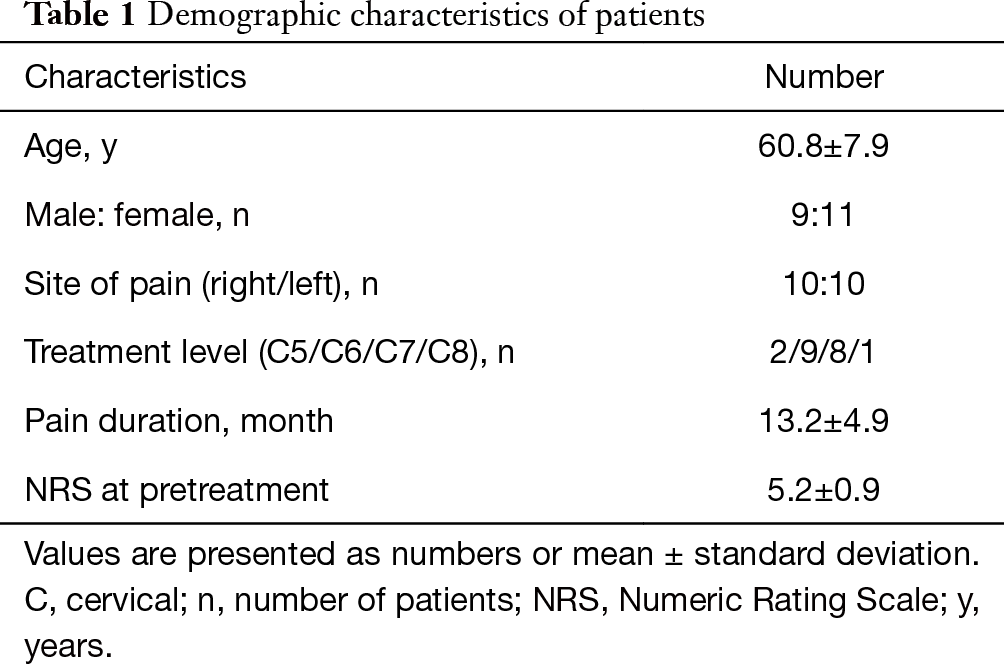 The bipolar PRF procedure was performed under aseptic conditions. The patient was laid in a supine position for C-arm fluoroscopy (Siemens, Munich, Germany). Two 22-gauge curved-tip catheters (SMK pole needle, 100 mm with a 10 mm active tip, Cotop International BV) were inserted and a sensory stimulation test was conducted using a radiofrequency generator (Cosman G4, Cosman Medical, Burlington, MA, USA). Each catheter needle was then advanced toward the DRG until the patient reported a tingling sensation and/or dysesthesia at <0.3 V. The distance between the 2 catheter needle tips was <10 mm (26), but they were not in contact with each other (Figure 1). The PRF treatment was administered at 5 Hz and a 5-ms pulsed width for 360 seconds at 45 V, with the constraint that the electrode tip temperature did not exceed 42 °C. The physician, who had 10-years’ experience of spinal interventions, conducted all the bipolar PRF procedures and was blinded to the outcome measurements. 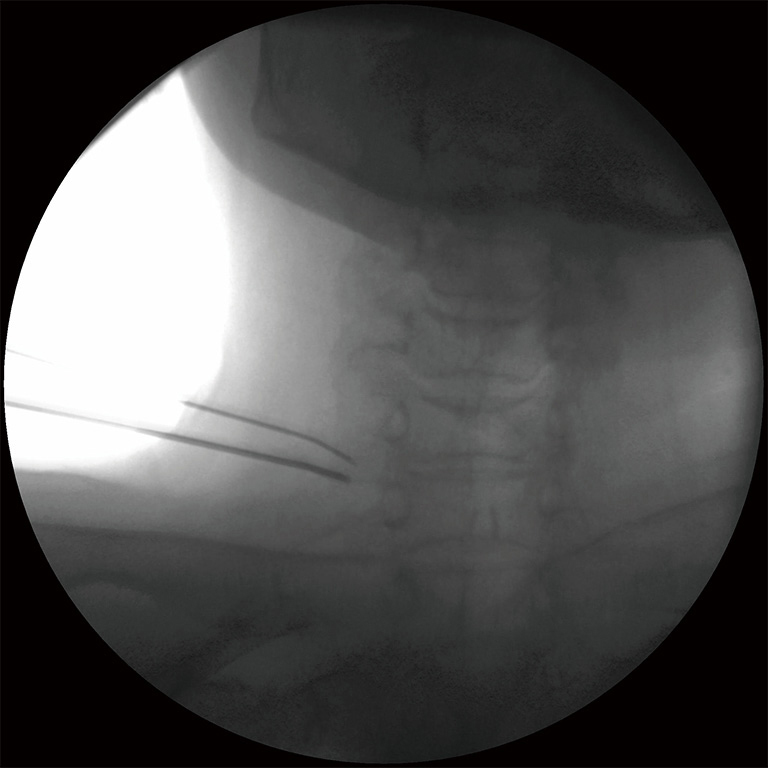 One investigator performed all the pretreatment and follow-up assessments and did not participate in conducting any treatment procedures. Pain intensities were assessed using an NRS (ranged from 0–10).

NRS scores were assessed before treatment and at 1, 2, and 3 months following treatment. Successful treatment was defined as a ≥50% reduction in the baseline NRS score at 3 months. The percentage of reduction in NRS scores was quantified by expressing score reductions at 3 months as percentages of baseline scores. Additionally, patient global perceived effect (GPE) was assessed at 3 months post-PRF using a 7-point Likert scale (27,28) (Table 2), and patients that reported very good (score =7) or good results (score =6) were considered to be satisfied with the procedure. 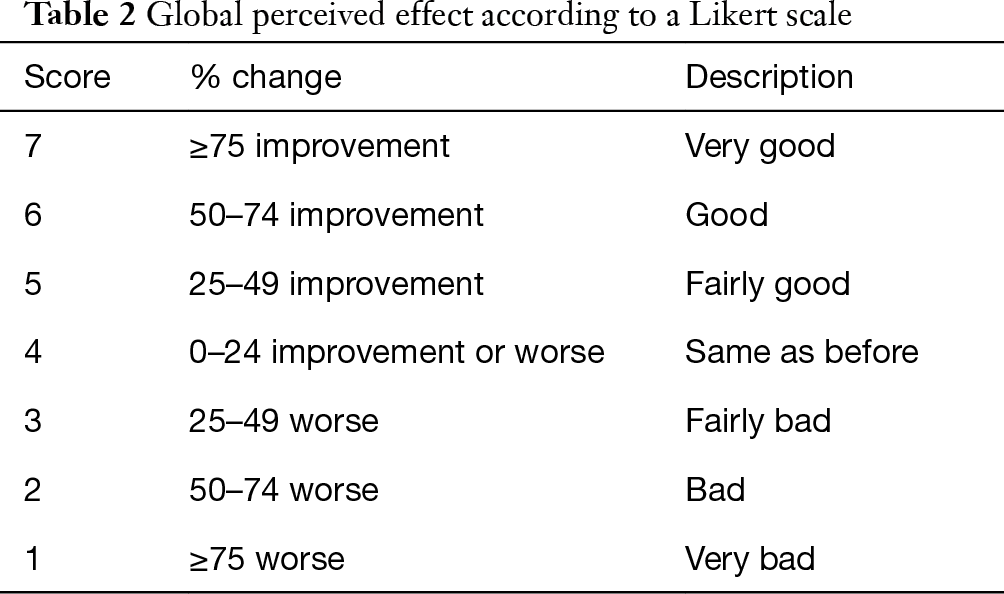 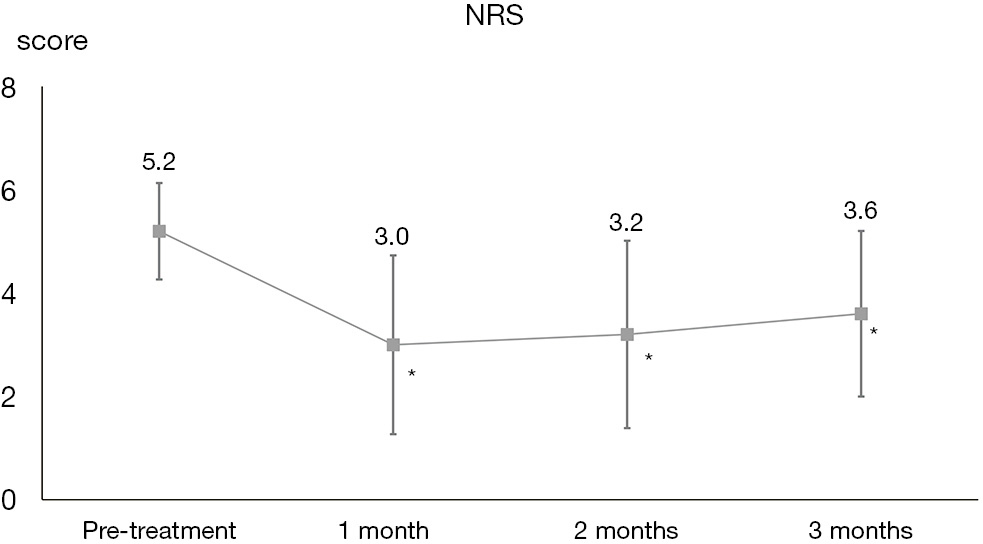 Figure 2 Changes in the Numeric Rating Scale (NRS) scores for cervical radicular pain during the assessment period. The NRS scores decrease from 5.2 before treatment to 3.0 at 1 month, 3.2 at 2 months, and 3.6 at 3 months after bipolar pulsed radiofrequency stimulation. Significant differences were observed in the comparison between the pretreatment and posttreatment values at 1, 2, and 3 months. *, indicates significant results (P<0.05).

Therefore, half of all included patients (10 out of 20 patients) were satisfied with bipolar PRF of cervical DRG at 3 months following the procedure.

In this study, we evaluated the effect of bipolar PRF stimulation of the DRG in people with chronic cervical radicular pain who were unresponsive to both monopolar PRF of DRG and cervical TFESI. Pain severity scores were significantly reduced at 1, 2, and 3 months following bipolar PRF. Half of the patients demonstrated a successful response (≥50% pain reduction) and were satisfied with their treatment results at 3 months after the procedure.

The mechanism of action of PRF on alleviating pain has not yet been clearly established, but some mechanisms have been proposed. Cosman et al. suggested that the low frequency of pulses and the high voltages in PRF induces long-term depression of synaptic transmission, subsequently preventing the transfer of noxious signals to the brain (29). Erdine et al. reported that PRF leads to microscopic damage (abnormal membranes and morphology of mitochondria, and disruption and disorganization of microfilaments and microtubules) in the principal sensory nociceptive sensory fibers (C-fibers and A-delta fibers), but rarely causes damage to the larger non-pain-related sensory fibers (A-beta fiber) (30). Higuchi et al. found the application of PRF to DRG increases c-fos in the dorsal horn, which is known to sustain activation of some pain-inhibitory mechanisms (15). Cho et al. reported that PRF stimulation of the DRG decreases microglia activity in the dorsal horn (16). Activation of microglia plays an important role in the development of chronic neuropathic pain by secreting several inflammatory cytokines and chemokines that mediate pain signaling, thus causing a downregulation of microglia activity and could hinder the progression to chronic neuropathic pain.

Recently, based on above suggested evidence, monopolar PRF is widely used to alleviate various types of neuropathic pain in clinical practice. However, it has been suggested that bipolar PRF would be more effective than monopolar PRF because bipolar PRF would produce denser and larger electrical fields. Cosman et al. showed that the parallel-tip used during bipolar RF produced larger-sized lesions compared with monopolar RF (31). The 10 mm uninsulated catheter tip using during monopolar CRF stimulation produces a small prolate spheroid lesion of 12.8 mm × 7.8 mm (length × width) around its tip (31). In contrast, bipolar CRF generates a lesion between and around 2 closely positioned catheter tips. When 2 parallel catheter tips were 10 mm apart from each uninsulated catheter tips during bipolar CRF, the lesion size was 15.5 mm × 11.8 mm (length × width) (31). Therefore, bipolar RF can cover the targeted area more sufficiently. Direct comparison between CRF and PRF may be difficult, but the results of CRF could be similarly applied to PRF. Based on this idea, we performed bipolar PRF on DRG of patients with chronic cervical radicular pain who were unresponsive to monopolar PRF. Our patients’ radicular pain was significantly reduced, and this effect was sustained for ≥3 months following treatment. Also, half of included patients were satisfied with the results of bipolar PRF treatment at 3 months after the procedure.

Considering that our patients’ average duration from pain onset to bipolar PRF procedure was 13.2 months and all the patients’ pain duration was >6 months, the pain levels of our patients appeared to have reached a plateau state. Therefore, the reduction in pain is not likely to be responsible for the natural process of cervical radicular pain. Accordingly, although we did not compare our results with a control group, we believe that the pain reductions in our patients were attributed to application of the bipolar PRF.

To the best of our knowledge, for the management of chronic neuropathic pain, so far, 3 previous studies conducted bipolar PRF (9,18,25). In 2017, Chang et al. recruited 50 patients with chronic lumbosacral radicular pain who were randomly assigned to either the bipolar PRF or monopolar PRF group (25). They reported that the patients who received bipolar PRF demonstrated superior pain relief compared with monopolar PRF during the 3-month follow-up period. In the same year, Chang et al. performed bipolar PRF on cervical DRG to 2 patients with chronic cervical radicular pain who were unresponsive to monopolar PRF and repeated TFESIs (18). At 6 months after the procedure, pre-treatment pain degrees of NRS 7 and 6 in each patient were reduced to NRS 2. In 2018, Lee et al. conduced bipolar PRF on lumbar DRG in 23 patients with chronic lumbosacral radiculopathy who were unresponsive to monopolar PRF and TFESI (9). After the bipolar PRF, the pre-treatment NRS was significantly reduced, and this effect persisted for ≥3 months after the procedure. At 3 months, 52.2% of the 23 patients demonstrated a >50% pain reduction and were satisfied with their treatment results. In all of these previous studies using bipolar PRF, no major adverse effects were observed in any patient, similar to our study findings. Therefore, our study is the first prospective clinical trial to evaluate the effect of bipolar PRF on DRG in patients with refractory cervical radicular pain.

In conclusion, we found that cervical radicular pain refractory to monopolar PRF and TFESI was significantly reduced at 1, 2, and 3 months after bipolar PRF on DRG. Furthermore, half of our patients demonstrated a clinically relevant reduction in pain levels and were satisfied with bipolar PRF at 3 months following the procedure. In clinical practice, if monopolar PRF or TFESI fail to control cervical radicular pain, physicians have limited options to control this pain conservatively, and should, therefore, consider surgical operation as the next treatment option. Therefore, we believe that bipolar PRF of DRG could be considered a safe modality for alleviating refractory chronic cervical radicular pain. However, our study has some limitations. First, as mentioned above, this study was performed without a control group. Second, the number of recruited patients was relatively small. Third, the long-term effects of bipolar PRF were not evaluated. Lastly, we could not clearly explain why bipolar PRF demonstrated a better treatment outcome than monopolar PRF. In the future, further studies that address these limitations are warranted.

Funding: The present study was supported by a National Research Foundation of Korea grant funded by the Korean government (grant No. NRF-2019R1F1A1061348).

Ethical Statement: The authors are accountable for all aspects of the work in ensuring that questions related to the accuracy or integrity of any part of the work are appropriately investigated and resolved. The study was approved by the Institutional Review Board of Yeungnam University (No. 2017-02-011), and all patients provided a signed informed consent form.