Recent improvements in living standards and dietary changes have led to a significant increase in the incidence of hyperuricemia, particularly in younger individuals (1). Hyperuricemia is the biochemical basis of gout and is closely related to hypertension, coronary heart disease, metabolic syndrome, and diabetes (2) and has become a public health problem worldwide. Uric acid-lowering drugs, such as allopurinol, febuxostat, benzbromarone, have not only good efficacy but also have several side effects (3). Therefore, it is important to identify new uric acid-lowering drugs with good efficacy and minimal side effects. In China, tea has been consumed for thousands of years; it is thought to reduce uric acid and improve gout. Tea polyphenols (TP) and their derivatives have been detected, including catechins, flavonoids, flower pigment, and phenolic acids; catechins account for 65–80% of the total TP. Catechin compounds in tea include catechins (C), epicatechin (EC), epicatechin gallate (ECG), epigallocatechin (EGC), gallocatechin 3-O-gallate (GCG), and epigallocatechin gallate (EGCG), EGCG account for 50% of the total TP (4). TPs are linked to weight loss, the reduction of blood lipids, and anti-cancer, anti-osteoporosis, and other pharmacological activities (5). TP reduces the high uric acid levels in mouse serum induced by potassium; in particular, it reduces uric acid production and increases uric acid excretion (6). However, the effective component of TP in tea leaves involved in lowering uric acid is unclear. In this study, the effect of EGCG in tea leaves on uric acid was studied in vivo and in vitro to clarify the pharmacological effect of EGCG.

BRL 3A rat liver cells were provided by the Cell Bank of the Chinese Academy of Sciences, and cultured in DMEM supplemented with 10% fetal bovine serum under 5% CO2 at 37 °C.

The effect of EGCG on BRL 3A cell proliferation was studied by the CCK8 method. The cell suspension was inoculated into a 96-well plate. After 24 h of culture, EGCG at different concentrations was added for 48 h. CCK8 reagent (10 µL) was added to each well and incubated in an incubator for 1 h. The absorbance was measured at 450 nm (SpectraMax I3 Austria). The inhibition rate was calculated according to the formula: inhibition rate (%) = (1– absorbance of treatment group/control group) ×100%.

Uric acid and XOD were measured using uric acid and XOD test kits (Nanjing Jiancheng). After homogenization, the tissue protein concentration of XOD was measured, and the level of XOD activity in tissues was calculated to follow by the procedure manual.

Sixty male Sprague-Dawley rats were purchased from Hunan Slaike Jingda Experimental Animals Co., LTD. (certificate No. SCXK 2016-0002). A chronic hyperuricemia model was established by the subcutaneous injection of oxonic acid potassium salt (200 mg/kg) and the intragastric administration of ethambutol (250 mg/kg) once a day for 7 days. The rats were randomly divided into a normal group, model group, high-, medium-, and low-dose EGCG groups (100, 50, and 25 mg/kg, respectively), and an allopurinol group (10 mg/kg). One hour after the model was established, the drug was given by gavage once a day for 7 days. Blood was collected from the eye socket 3 h after the last model was made, and the liver and kidney were preserved after the animals were killed.

The rat liver was added to normal saline to make a 10% tissue homogenate, and the supernatant was centrifuged to determine the concentration of XOD.

Total RNA from the renal tissue was extracted using TRIzol reagent, followed by cDNA synthesis by the Revert Aid First Strand cDNA Synthesis Kit (Eppendorf Mastercycler). The primers are shown in Table 1. The conditions were: predenaturation at 95 °C for 1 min, followed by 40 cycles of 95 °C for 3 s and 60 °C for 20 s. The mRNA quantity was calculated based on cycle threshold (CT) values by Applied Biosystems 7500 v.2.0.6. The relative mRNA expression levels were determined by the 2–ΔΔCt method.

The kidney tissues were fixed in 10% neutral formalin solution. Ethanol gradient dehydration, xylene transparency, wax immersion, embedding, and slicing at a thickness of 5 µm were performed. Immunohistochemical staining was performed by the SP method, and the primary antibody was replaced with phosphate-buffered saline for the negative control. DAB and hematoxylin staining were performed. Rats were randomly selected from each group, sections were made from each kidney, and high-power (×200) visual fields were evaluated using Image-pro plus 6.0.

The data are expressed as . SPSS17.0 was used for statistical analyses. One-way ANOVA was used for comparisons among groups. P<0.05 was considered statistically significant.

Effect of EGCG on survival in BRL 3A hepatocytes 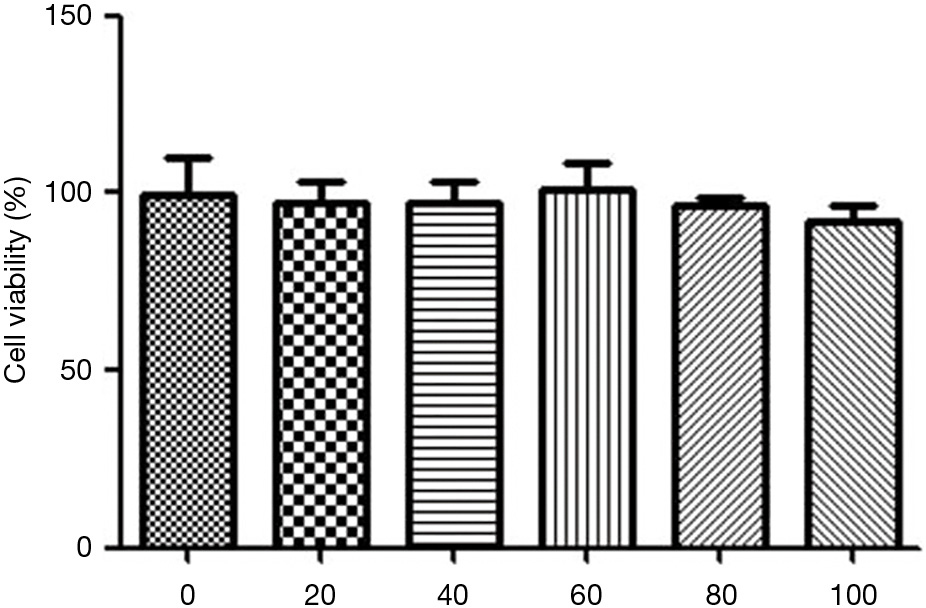 Figure 1 Effect of EGCG on BRL 3A cell toxicity. BRL 3A liver cells (3×103 cells) were cultured in a 96-well plate overnight and treated with EGCG (20 to 100 µM) for 48 h. A CCK8 assay was used to determine cell viability. EGCG, epigallocatechin gallate.

We evaluated the effects of EGCG on uric acid in vitro. In xanthine-pretreated cell supernatants, XOD activity and uric acid were significantly higher than those in control cells. EGCG at 40 and 10 µL significantly inhibited XOD activity (P<0.05) and reduced the levels of uric acid (P<0.05), as shown in Figure 2.

Figure 2 Effects of EGCG on XOD activity and uric acid levels in rat BRL 3A liver cells. Rat BRL 3A hepatocytes (1×106 cells/well) were cultured overnight in 6-well plates. Briefly, 4 mM xanthine and allopurinol (2 µM) or EGCG (10, 20, or 40 µM) were added to cells. Uric acid concentrations and XOD activity were measured in the supernatant after 48 h by enzyme marker assays and the BCA method. (A) Effect of EGCG on the activity of XOD; (B) effect of EGCG on the level of uric acid. *, P<0.05, **, P<0.01 as compared to the control; ##, P<0.01 compared to the hyperuricemia. EGCG, epigallocatechin gallate; XOD, xanthine oxidase. 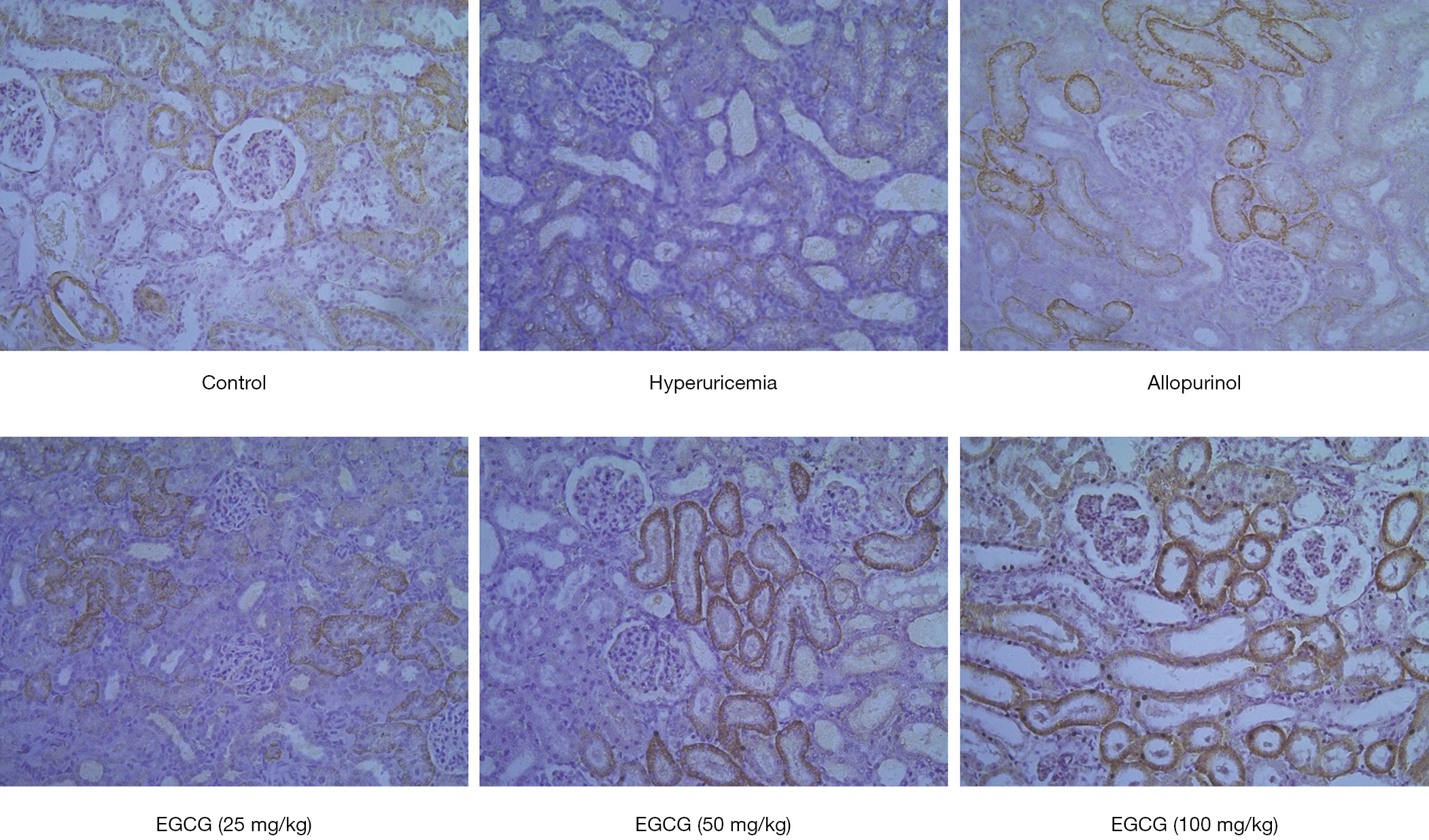 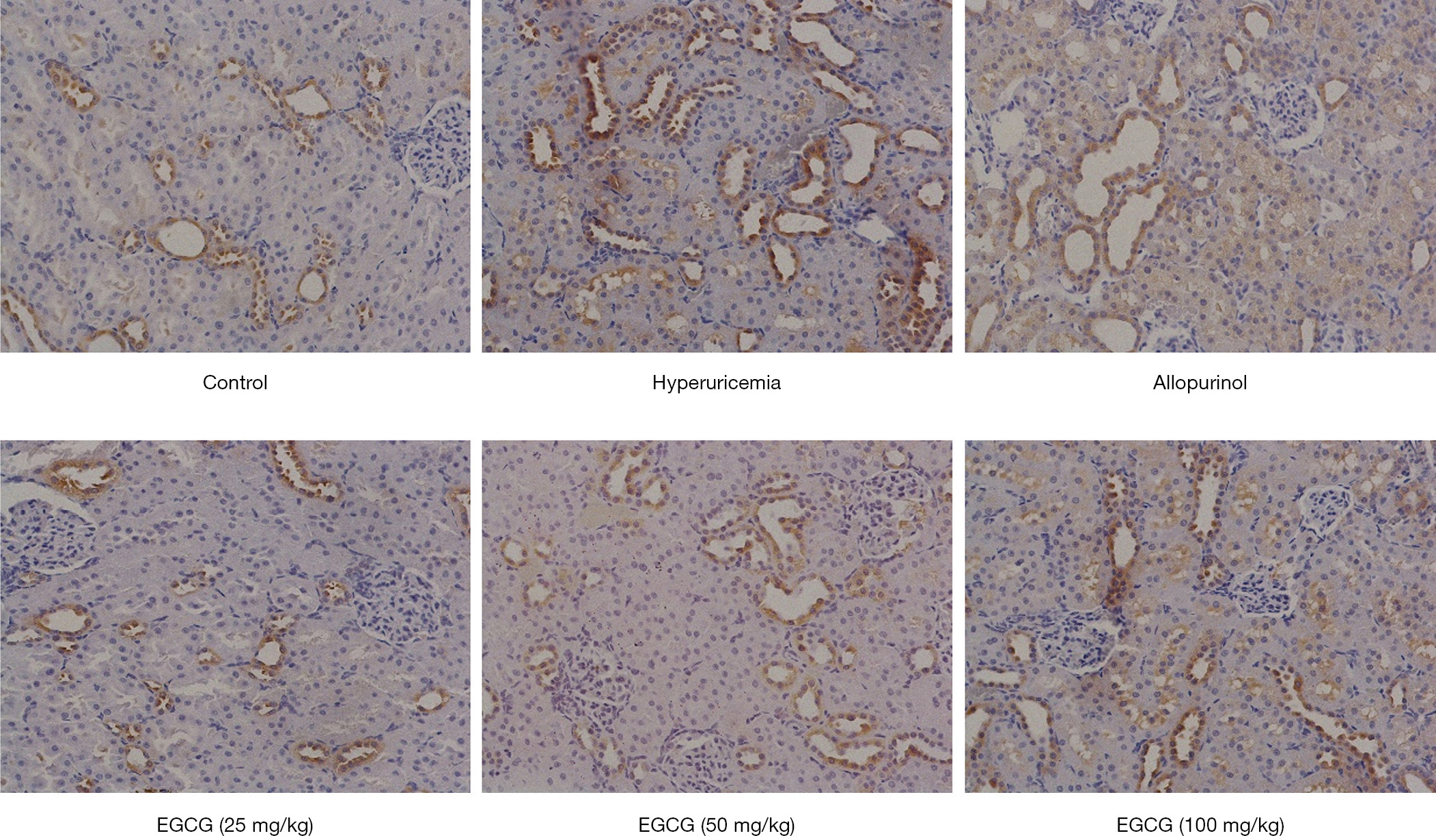 Kidney uric acid excretion mainly involves glomerular filtration, renal tubules, and collecting duct absorption, and re-secretion after reabsorption. About 98% of glomerular uric acid is absorbed by renal tubules (15). OAT1 is encoded by SLC22A6, located on chromosome 11q13.1, consisting of 10 exons and 9 introns. Eraly et al. (16) found that in OAT1 knockout mice, the ability of renal tubules to secrete urate was significantly reduced, and human organic anion transporter 1 (hOAT1) was the main substance regulating renal uric acid secretion. hOAT1 plays an important role in the absorption of urate from the portal vein space to renal tubular epithelial cells. It has time-dependent and dose-dependent effects on the transport of uric acid. Many organic and inorganic anions can affect the transport of uric acid via hOAT1. GLUT9, also known as a voltage-driven urate transporter 1 (URATv1), belongs to the glucose transporter family and is a high flux and low energy urate transporter (17). Glut9, encoded by SLC2A9, is divided into two subtypes, Glut9a and Glut9b. Glut9a is expressed in several metabolic organs, while Glut9b is found only in the liver and kidney. The renal tubule is the main site of Glut9 expression. Therefore, Glut9 is a risk factor for hyperuricemia. Vitart et al. (18) studied a Croatian genome and found that SLC2A9 explained 1.7–5.3% of the variation in the uric acid concentration. The contribution differed between men and women (17) (i.e., 5–6% for women and 1–2% for men). Increasing research has focused on the development of glut9-related drugs (19). In this study, EGCG significantly promoted the expression of OAT1 and inhibited the expression of GLUT9 in renal tissues of hyperuricemia rats.

EGCG can significantly reduce uric acid levels in xanthine-stimulated BRL 3A liver cells and can significantly reduce uric acid levels in oxygen oxazine and potassium combined with ethambutol-induced hyperuricemia rats. Its mechanism of action may be related to the inhibition of the activity of the uric acid synthetase XOD activity, the promotion of OAT1, and the inhibition of GLUT9. The results reveal the basis for understanding high uric acid-related hematic disease resistance and demonstrate the potential clinical applications of EGCG.

Ethical Statement: The authors are accountable for all aspects of the work in ensuring that questions related to the accuracy or integrity of any part of the work are appropriately investigated and resolved. The study was approved by the Experimental Animal Ethics Committee of Jiangxi University of Traditional Chinese Medicine (No. JZLLSC2018-0094).