Translation into Portuguese, cross-cultural adaptation and validation of “The European Organization for Research and Treatment of Cancer—Quality of Life Questionnaire—Bone Metastases-22”

Metastatic disease is the main cause of death among cancer patients. Bones are the third most common site of metastasis, after liver and lungs. Breast, prostate, lung thyroid and kidney tumors are the tumors that most frequently metastasize to bone. At the Department of Orthopedic Oncology of São Paulo Hospital, the incidence of bone metastases from breast cancers represents 45% of all cases, followed by prostate (12%) and lung cancer (9%) (1).

Skeletal-related events (SREs) due to bone metastases cause a variety of morbidities, including pain, spinal cord compression, pathologic fractures and hypercalcemia. Such events may cause significant debilitation and may have a negative impact on quality of life and functional independence (2).

Current management of bone metastases is aimed primarily at reducing morbidity due to SREs to preserve or improve both quality of life and functional independence. Preventing SREs and improving survival are the goals of both current and future research (1).

The aim of the present study was to translate the EORTC QLQ-BM22 into Brazilian Portuguese, to adapt the instrument culturally and to validate the newly adapted instrument.

This original, longitudinal, observational study was designed with no control group and was approved by the Ethics Committee of Universidade Federal de São Paulo, Brazil (CEP-UNIFESP/EPM 1649/11). Ninety-five bone metastasis patients (31 men and 64 women, mean age 58.36±8.90 years) took part in the investigation. All participants gave their written informed consent to take part in the study. The patients were recruited prospectively between August 2012 and August 2014.

They were eligible if they were over 21 years old, with histological confirmation of primary cancer and radiologic evidence of bone metastases (X-ray, CT, or bone scintigraphy). Exclusion criteria included inability to understand the questionnaire.

Face and content validity were assessed by one multidisciplinary committee (consisting of a doctor, physiotherapist, nurse and psychologist). To assess the construct validity, 40 patients were evaluated by the EORTC QLQ-BM22 and the Brazilian version of the Short Form Health Survey [36-Item Short Form Survey (SF-36)]. To analyze construct validity, Pearson’s correlation coefficient was tested between the questionnaires. A probability level less than 0.05 was considered statistically significant. The analyses were conducted using the SPSS version 16.0 software. 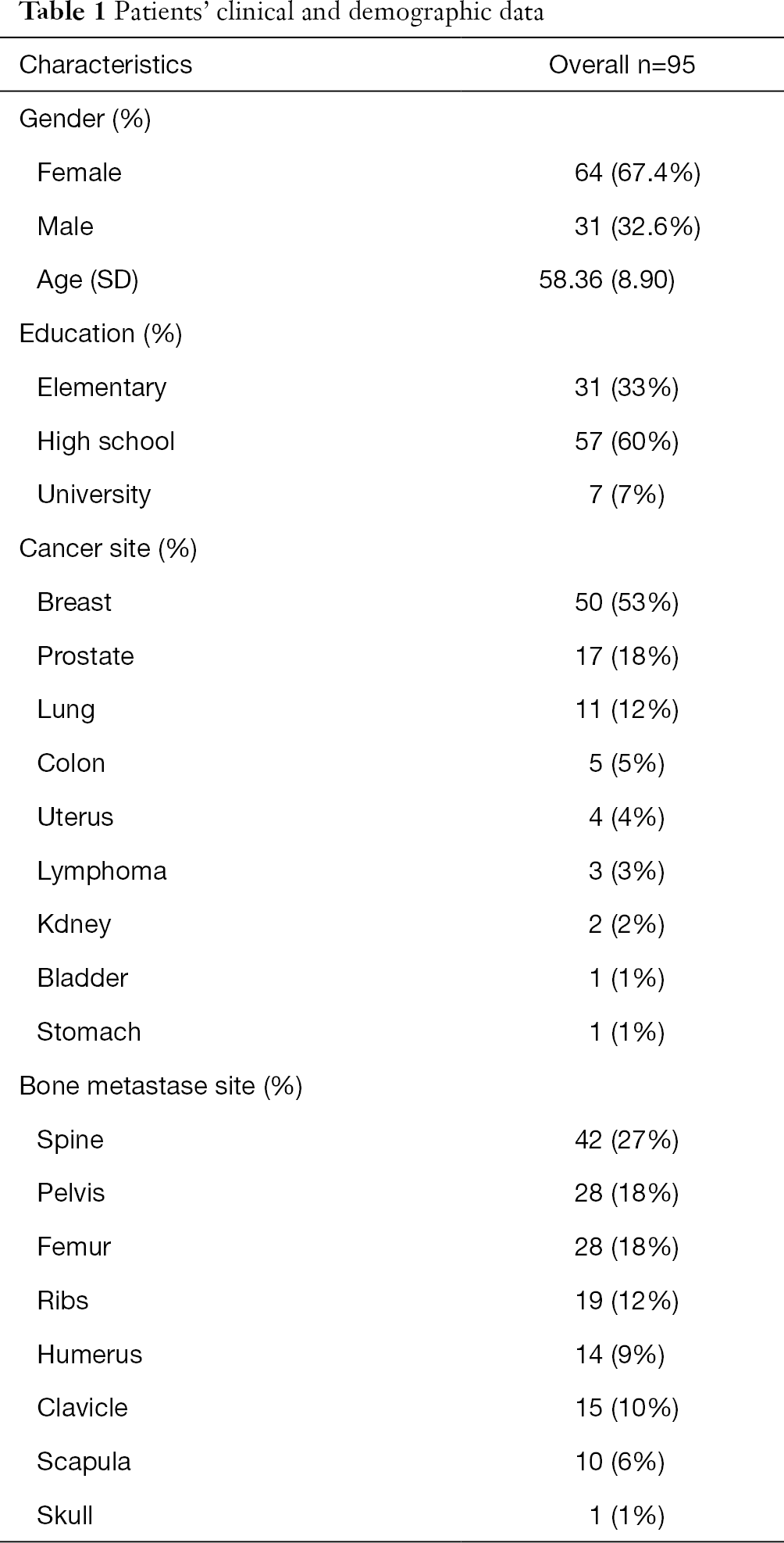 After the translation process by two independent translators, two Portuguese versions of the EORTC QLQ-BM22 were prepared and were then reviewed by a multidisciplinary committee that drafted a single version in Portuguese. This Portuguese version was retranslated into English by two independent translators, who created two Portuguese versions of the questionnaire. These two versions were analyzed and compared to the original version to discern possible differences or discrepancies in the translation process. At the end of this stage, the final version of the EORTC QLQ-BM22 was drafted in Portuguese.

One patient (6.6%) did not understand the term “constant” in question number 6 (You had constant pain?), and one patient (6.6%) did not understand the term “intermittent” in question 7 (You had intermittent pain?). Because the proportion of patients affected was less than 10%, it was not necessary to modify these terms. Thus, the Portuguese measure was considered culturally equivalent to the English measure, and there was no need for any changes to the questionnaire. The average time taken to answer the questionnaire was 8 minutes, with a range of 5 to 14 minutes. The degree of internal consistency of the questionnaire was measured in each of the three interviews. It was determined that the Cronbach’s alpha value was high in all three interviews, and these alpha values show that the questionnaire is fairly consistent (Table 2).

We can conclude from these data that both the Pearson correlation and the intraclass correlation values are statistically significant and very high, showing that the first interview has excellent reliability and validity with the two additional interviews (Table 3). 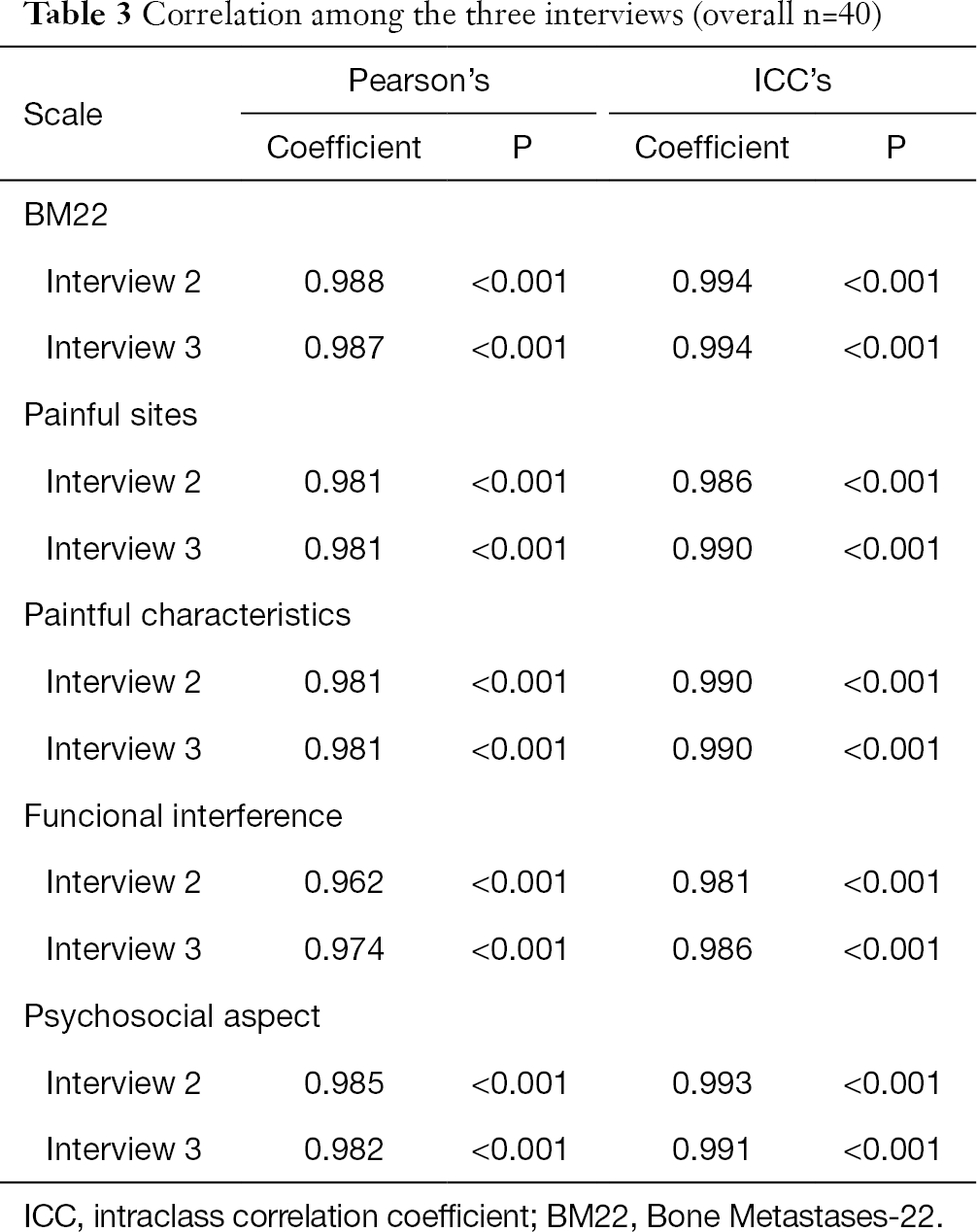 We analyzed the results of the correlation between symptom QLQ-BM22 with the SF-36. This indicates the existence of a significant correlation between the symptom domain of the QLQ-BM22 and the areas of functioning, bodily pain, general health, vitality, and social aspects as well as the domains of limitation by emotional aspects and mental health from the SF-36 (P<0.05). Only the domain of limited by physical appearance showed no correlation with the symptom domain of the QLQ-BM22 (Table 4). 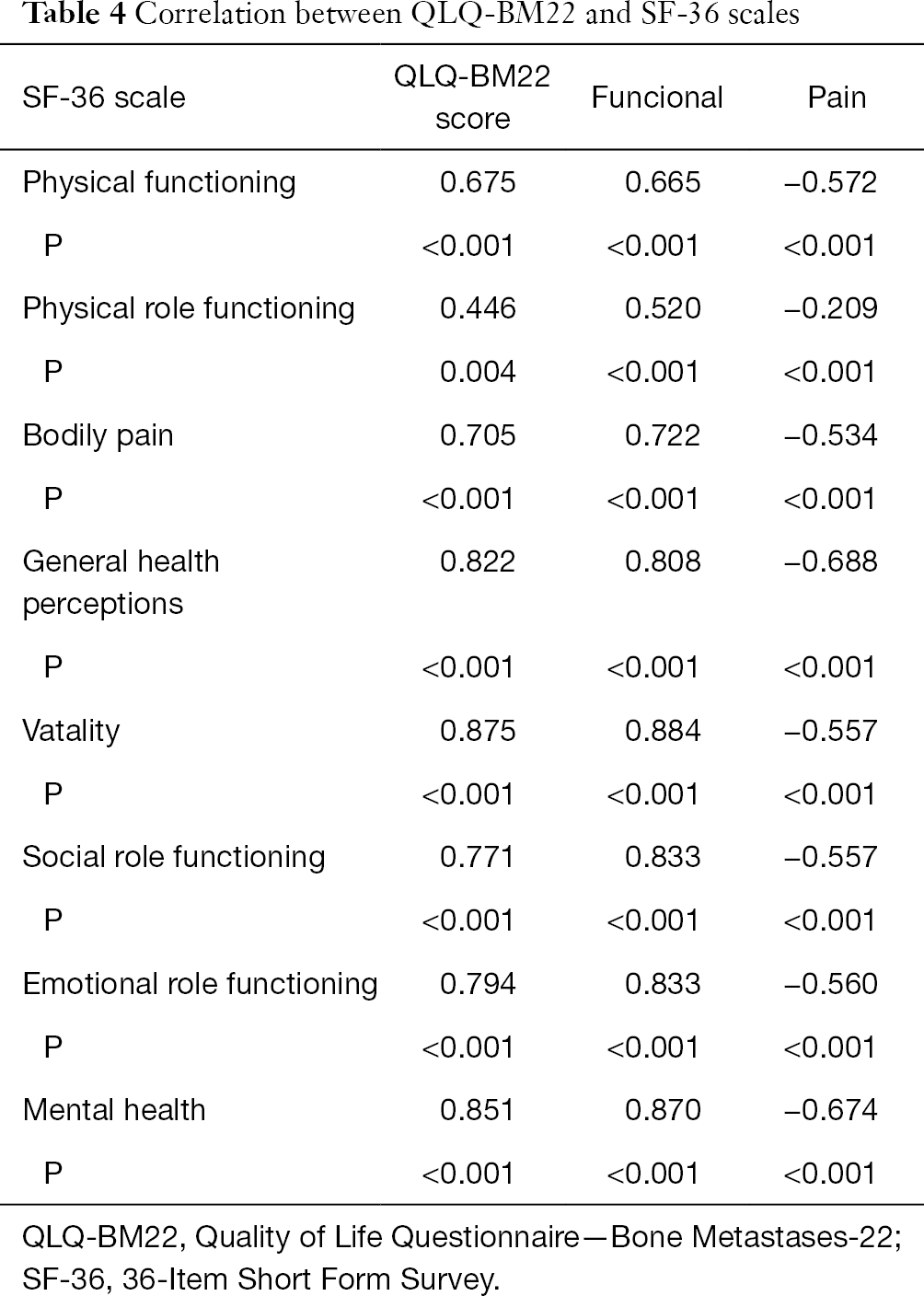 Analysis of construct validity revealed moderate and strong correlations between the SF-36 coefficients and the EORTC QLQ-BM22 score (total and subscale).

The incidence of SREs has been increasing, possibly due to the improvements in treatment of the primary site and treatment of disseminated cancer, thereby increasing the survival of these patients (5).

Bone metastases cause various co-morbidities, including pain, pathologic fractures, hypercalcemia and spinal cord compression. These events have a negative impact on the quality of life and functional independence of cancer patients (6).

Currently, there are concerns not only about the results of the treatment or surgical intervention but also about the functional and emotional impact on the quality of life. The challenge for researchers is to quantify the subjective character data and determine what issues should be addressed. Generally, measurement tools are created originally in English, so it is necessary to complete the translation process and then evaluate the measure’s properties in a specific cultural context (7,8).

Each country has its own customs, beliefs, behaviors and habits that directly reflect its culture and differences. To translate a tool, we should aim to present the tool in easy-to-understand language and simple, clear words that are appropriate to the culture, without losing the essence of the original version.

The choice of a tool for evaluation depends on a few factors. Initially, the tool must have credibility and comprehensiveness, accuracy and reproducibility. The tool should also be easy to apply and have acceptability among the interviewees and interviewers (9). Evaluation questionnaires must be reproducible over time and should thus produce the same or similar results in two or more administrations to the same patient if the patient’s medical condition did not change (10). None of patients in this study had any changes in their treatment or intervention during the research, thus justifying the great inter-rater agreement.

Among the cases of musculoskeletal cancer, bone metastasis is the most frequent complication, and it can lead to the presence of pain and loss of function, thereby worsening the quality of life of these patients. There was a need for a specific tool that aids in the clinical and therapeutic monitoring of these patients by evaluating the quality of life. This study sought to evaluate a tool that met this need and addressed issues related solely to the characteristic symptoms of patients with bone metastasis in a simple and objective way. The QLQ-BM22 is an instrument available in the literature that has been translated and validated for use in Japan, Iran and Poland (4,15-18).

For a long time, assessments of a given intervention were performed using clinical criteria. Currently, there is a consensus on the need for standardized evaluation systems. There is also a need to compare results of different treatment methods in patients with the same problem and to analyze the effectiveness of a treatment modality with greater reliability.

Because of the high incidence of patients with bone metastases and the progress of treatment, the QLQ-BM22 can help multidisciplinary professionals evaluate patients by following the evolution of symptoms and functioning. However, the tool can also be used to determine the effect of different treatments on a patient, so the best approach can be chosen to improve the patient’s quality of life and well-being (1,20).

Ethical Statement: The study was approved by the Ethics Committee of Universidade Federal de São Paulo, Brazil (No. CEP-UNIFESP/EPM 1649/11) and written informed consent was obtained from all patients.